The fitness world is a multi BILLION dollar industry.  With that kind of money floating around, you can be assured that companies within the industry will run the full gamut of  advertising and marketing practices, trying to ensure that they receive their cut of the profit.   We also know that a vast majority of our society is, unfortunately, still holding out for that “quick fix” to weight loss.  Combine these factors together, and we have an industry that is constantly one upping itself with the latest/greatest/fastest way to (supposedly) lose weight…until it’s proven that this doesn’t work and everyone moves on to the next trend.  It’s no wonder so many people are utterly confused when it comes to fitness.

Obviously we can all be quick to point fingers at the industry itself for products like diet pills and the ridiculous belt that will supposedly electrocute your abs into a 6 pack.   But then there are facts and methods that while based on science, have been misconstrued over time by both misinformed fitness seekers as well as those in the industry trying to make a quick buck.  These topics can be and unfortunately are often misrepresented as something that isn’t exactly what you think it is. 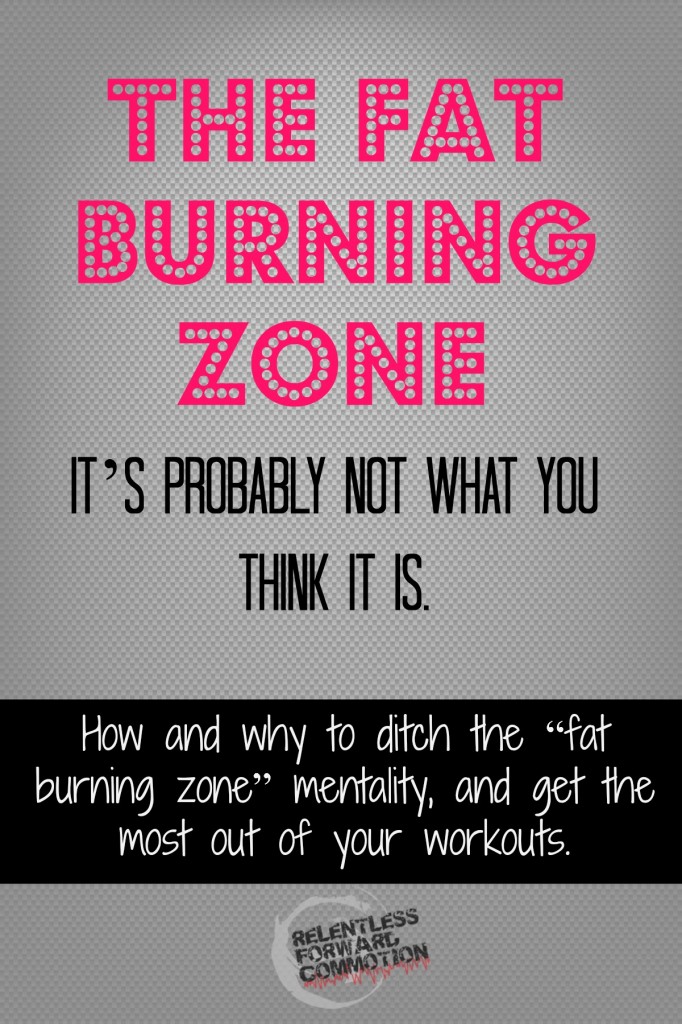 It’s often plastered all over the screens of cardio equipment. When your heart rate is in the green area you are in the “fat burning zone”.  Sounds great, right?  Yet I often see gym members and clients slaving away on said equipment, bored to tears, not working as hard as they think they should be (but the machine says fat burning!), and not having results.  And the reason is because the “fat burning zone”, while accurate in description, is misleading in outcome when referring to weight loss. 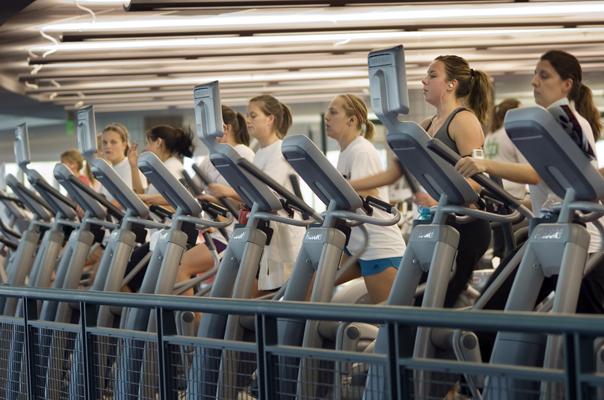 Don’t they all look thrilled? (source)

This is not ground breaking news, in fact it has been explained across the great world wide web time and time again.   Though many do refer to the “fat burning zone” as a myth, I have to disagree, it is simply a misunderstanding.  I’ve seen countless people still confused about the topic, so I thought I’d write about it as well, in hopes that maybe some of my readers might get a better grasp on the subject. Besides, it’s been about two weeks since my last post, it’s about time I put something on this blog.   Anyway…

Let me explain in “Heather” terms (based on science, confusing details and non specific calculations left out):

Just like a car, your body needs fuel in order to work.  Its two main fuel sources during exercise are fat and carbohydrates.

The “Fat Burning Zone” generally occurs at about 60-70% of your maximum heart rate.  This is what most would consider lower to moderate intensity exercise.  There you are utilizing mainly (but not all) fat as a fuel source over carbohydrates.

As mentioned above, fat contains over twice as many calories per gram as carbohydrates. Thus, it is slower burning, as it takes longer to convert to fuel, and requires oxygen to carry out this process (aerobic metabolism). Endurance athletes LOVE the fat burning zone, because it takes a lot longer to burn through fat energy stores than carbohydrate stores (namely, glycogen in the blood stream), thus we can run significantly longer, and avoid the “bonk” or the “wall”.  Three cheers for Zone 2!!

Now, the anaerobic zone generally occurs at about 70-90% of your maximum heart rate.  This is what most would consider high intensity exercise, or the “this kind of sucks” zone (I should market that as a label on treadmills…). Here you are utilizing mainly (but again, not all) carbohydrates as a fuel source.

As mentioned above, carbohydrates contain about half the number of calories per gram as fat.   This fuel source doesn’t last as long, and there is a whole slew of other physical things that happen when you go “anaerobic” (that we won’t dive into in this post), but the main point is that we burn though carbohydrates faster.

Now I know what you are thinking: “but…twice as many calories to burn!” , “I want to burn fat, that’s why I’m on this blasted elliptical!“, etc.  But here’s where it gets tricky… so hold on and stick with me.   Remember now, carbohydrates burn FASTER as a fuel than fats.  Further, using a bunch of equations that I’m not going to bore/confuse you with, we know that the higher the heart rate, the greater the TOTAL caloric expenditure, regardless of where those calories are coming from.

Here: a chart that has been used on the internet many times over (except I added arrows and a monster to really drive home my point),  to demonstrate what I’m talking about without making you sit through the messy equations: 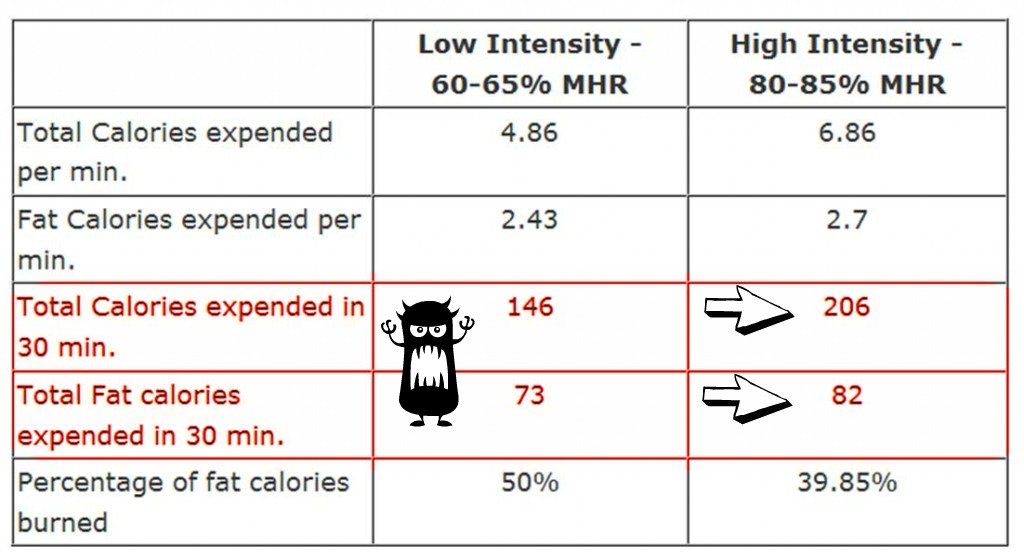 Based upon a 130 lb female.  Numbers are purely an example, and vary based on weight, gender, age, actual max heart rate, etc.   Source: The 24/5 Complete Personal Training Manual, 24 Hour Fitness, 2000

Over 30 minutes, MORE total calories, as well as more total calories from fat, are burned in the higher intensity zone than the “fat burning zone”.  And how do we lose weight?  We burn more calories than we consume.   3500 calories per one single pound to be exact.  So in the matter of weight loss, does it really make a difference where those calories come from?  Or would you rather your workout be more time efficient?

Ditch the “fat burning zone” mentality (unless of course, you are zone training for specific endurance reasons.  That is a blog post for another day).   Mix up your weekly workouts to contain high intensity exercise, low intensity (recovery is important), and intervals of both high and low intensity exercises.  And for the love of all things: pick up some weights.

This post brought to you by Heather, who hates to see you do less than you are capable of simply because of a common misconception.

*edit*  A quick clarification brought upon by some comments on facebook:   I have done zone endurance training in the past and have become very familiar with the dreaded “Z2” or fat burning zone. When we are talking about endurance specifics, this topic is indeed more complicated and involved, and the fat burning zone does indeed work for long distance fueling purposes. But the endurance athlete, elite nor beginner, was not my intended audience. It is more for the “30 minutes on the elliptical and done” fitness/health seeking crowd who maintains a low heart rate yet can’t understand why they aren’t seeing results, because the machine SAYS “fat burning zone”.