*disclaimer* race entry and accommodations for the RW Half weekend were provided for me by Runner’s World.  All opinions are my own.

A few months back, when I had received the invitation from Runner’s World to attend the races this past weekend and saw that there was going to be a trail race, I declared out loud (to the cats, they were the only ones listening) “I’m going to try and win that thing”.   Then, I took it one step further by emailing my contact at Runner’s World and telling him I wanted to try and run the trail race to win it.   And for all of a week or two, I had that goal in the back of my mind…

…until we started training for this 24 hour race.  Then all short distance goals went out the window.    So far out the window, in fact, that I completely forgot about even wanting to race this particular trail race.  That is until said contact called me out Friday morning before the race and reminded me in front of our entire group (and the Altra crew) of what I told him.   “I thought you wanted to try and win”, he said.

So I figured it certainly wouldn’t hurt anything to try and race for time, even though I wasn’t necessarily prepared to race.  But trails have indeed become my happy place, and the thought of barreling up and down 3.8 miles of them, lungs aching and heart pounding, actually sounded kind of fun.  So what the hell…

I was going for it.

After a very busy morning and afternoon (read about Day 1 and Day 2), it felt strange to be gearing up for a 3:00 pm race.   But the good news was that the late afternoon sun had finally started to warm up the air, and the temperature was suddenly much more bearable.  Our influencer/blogger group headed by van to the race start at the South Mountain trails.   Check in was fast and easy.  We got our bibs with just enough time to line up at the start. 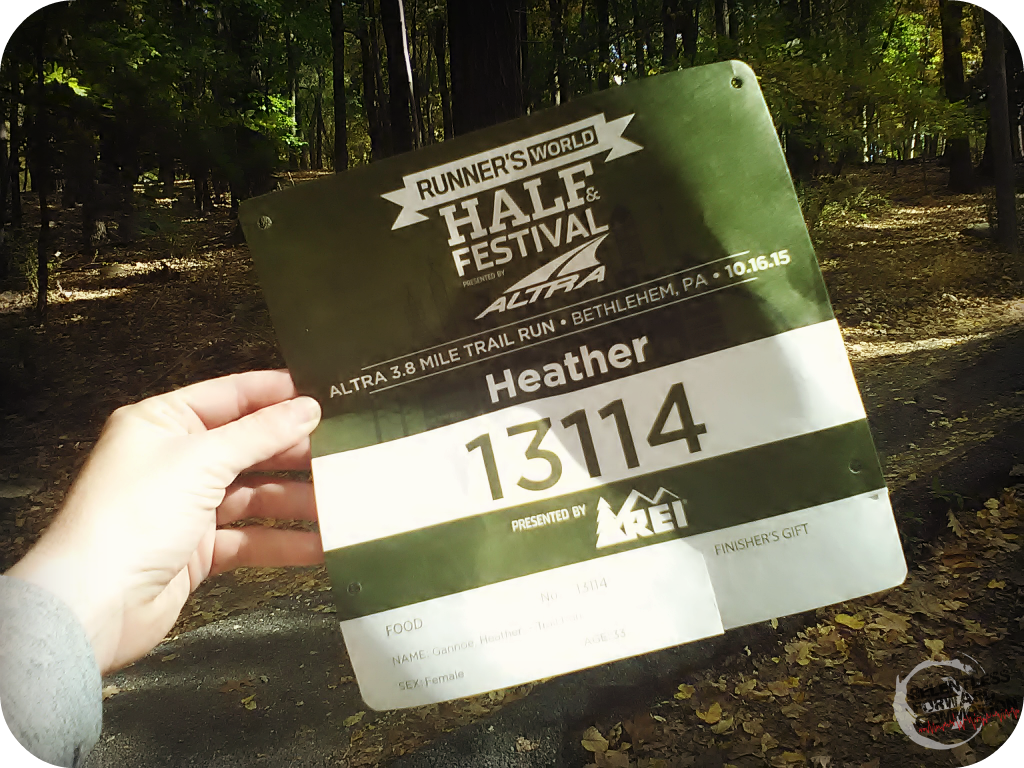 The vibe at the start of this race was very laid back, as trail races often are.  Except the vibe was also full of the “I’ve never done this before, here you line up in front of me” type of runners.  I’m not sure if the majority of people there were just running so they could get the first unofficial grand slam title (trail race, 5K, 10K, & half marathon, all in one weekend) but many people seemed to be quick to tell you that they didn’t have any idea what was going on with this trail running nonsense.  So I took the opportunity to line up very close to the starting line, since not many other people were jumping to do so. Plus, having previewed the course earlier in the day, I knew the single track would make passing very hard, especially in the beginning.  Better to beat the crowds. 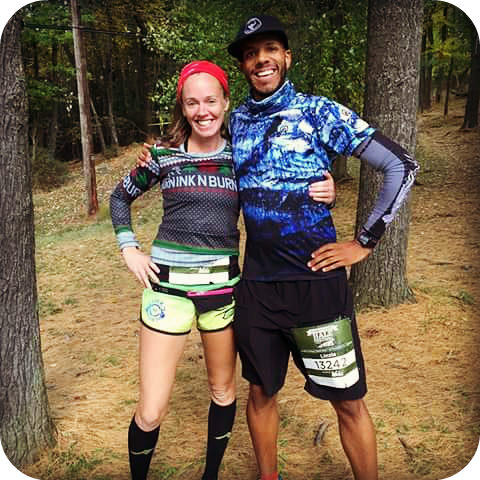 A quick count down from race director Bart Yasso, and we were off.  The first short stretch (and hill) was actually on pavement…sometimes you simply need to start a race in a parking lot.  But we quickly headed into the woods.  Now I was in my element.

The first small stretch was simply littered with softball sized rocks.  I really wish I had worn a GOPRO to document the terrain.  While the course itself wasn’t necessarily technical, all of those rocks were sprained ankles waiting to happen.

We headed further into the woods and started climbing.  I was picking off runners one by one, until the field finally started to really thin out. I knew I was towards the front of the pack, just unsure of how close.   We quickly reached a summit and started running downhill. 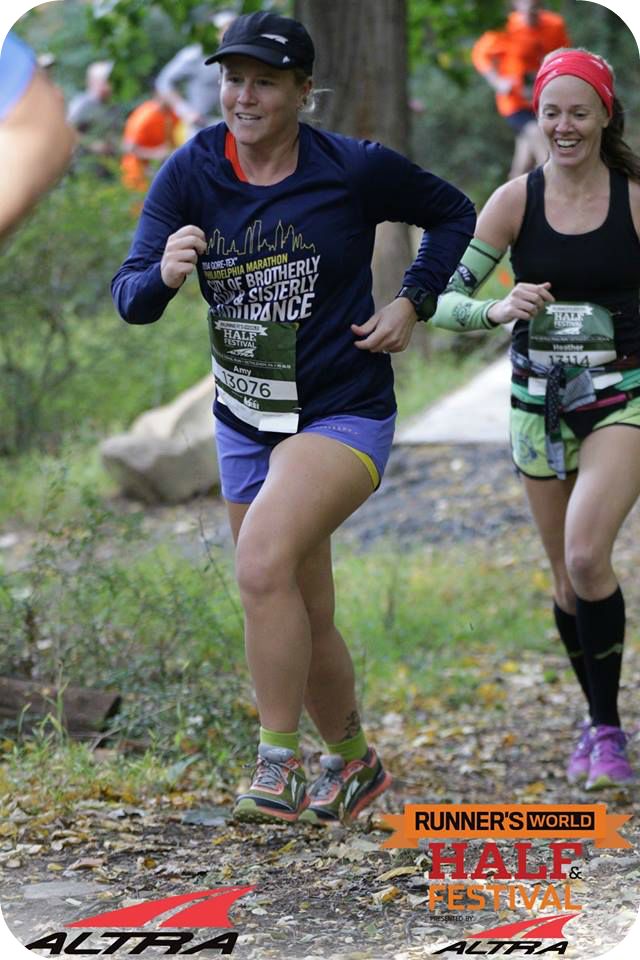 All smiles as I come up behind Amy (Marathon Mom)

Down hills are my specialty.  Perhaps it’s my gazelle legs (or giraffe legs, I’m not that graceful), or my fearlessness of loosing my teeth by tripping and face planting (here’s hoping I didn’t just jinx myself), but I’ve found over the years that the best approach to a downhill is to just let go and run.  Actually, run isn’t the right term.  BARREL. As fast as you can.  So many people tighten up and lean back into the hill, perhaps out of hesitation, but it’s like slamming your foot down on a giant brake during a portion of the race that is essentially free speed.

So now that you know my secret…

We barreled down hills for what felt like forever.  At one point I said to the guy behind me “You know what all of this downhill means? That we have to go back up it.”  He laughed at me, and muttered something in agreement.  We came to the end of an out and back section, and I was able to count the women in front of me.

There was only one.

I was in second place and feeling strong.  But it would turn out that the out and back on a single track trail at a race where most people aren’t familiar with trail racing etiquette would get a little messy.  In theory, you move to the side to allow the front runners to pass when coming in the opposite direction.  This wasn’t happening, but there was no time to care.  I started running off trail, praying to the trail running gods that there wouldn’t be any giant rocks, logs, or holes hidden under the long grass that would cause me to meet my demise…at least for that race. 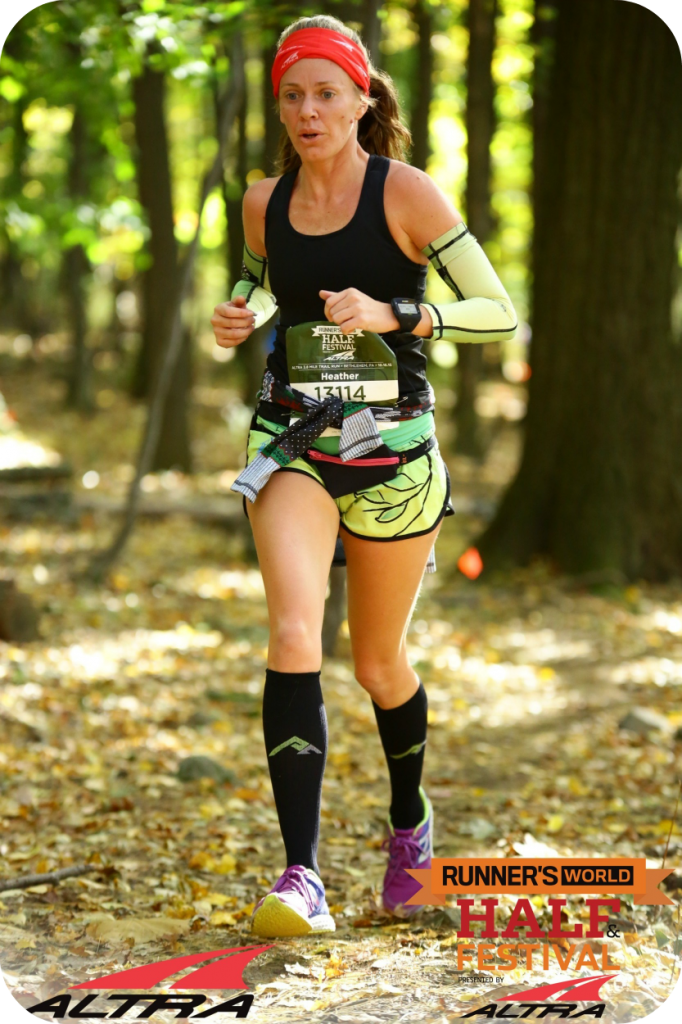 Another out and back section (we have now run what essentially is a “T” shape) and we turned to head back UP the mountain.  I really disliked the out and backs simply because of the crowding (probably my only complaint for this race) but it DID allow me to see all of my blogging friends. Their cheers certainly pushed me to hold strong.

Big uphill.  Short, tiny walk breaks to catch my breath.  I certainly wasn’t alone here.  While none of the trail was painfully steep, there were sections that were incredibly hard to climb when you are holding a 6:xx pace on a trail (at least for me).  But this is where the third place woman caught me.   She was much stronger on the uphills.

But I was much stronger on the downhills.

A long downhill section finally gave me a significant lead on her once again.  During this downhill section I found myself sandwiched between two guys.  I contemplated how annoying I must have been to the guy in front of me as I was hot on his heels for quite some time.   The terrain in this section was even gnarlier than before, rocks everywhere.   I also contemplated how much faith I have put into myself as a trail runner, in knowing that my body has the training and proprioception to know where to step, and to compensate for all of the twists, turns, and crazy terrain without falling.   Seconds after having these thoughts,  I heard the tell tale sign of the guy behind me tripping…but catching himself before falling.

“NICE SAVE!” I yelled back, without even turning around.  I could still hear his footsteps behind me, he was fine.

We came back down through the start line.  We were somewhere nearing the 3 mile mark of the race.  I had entered the land of “hold the f*ck on, you are ALMOST there” physical discomfort, when we turned to make the last big climb.

And that’s where I lost it.

THREE, count em, three women passed me.  3.1 miles in, and though I was alternating walking and running up this hill, I couldn’t hold their pace.  So close, yet so far away, I was so pissed.   But what can you do? The stronger runners win, and clearly I was not one of the strongest at that moment.   If only it had been a 5K, ha!

We finally crested the hill, and I saw that the last woman to pass me was not too far ahead.  I knew this last stretch was completely downhill, so I mustered the last bit of willpower and energy I had and put it into these long legs.

I passed her with maybe 300 yards left to go and barreled into the finish line, probably looking like I wanted to die.  The finish line announcer was saying something, but I couldn’t tell you what, as I was focused on a) not getting passed and b) not puking…as demonstrated in the photo below: 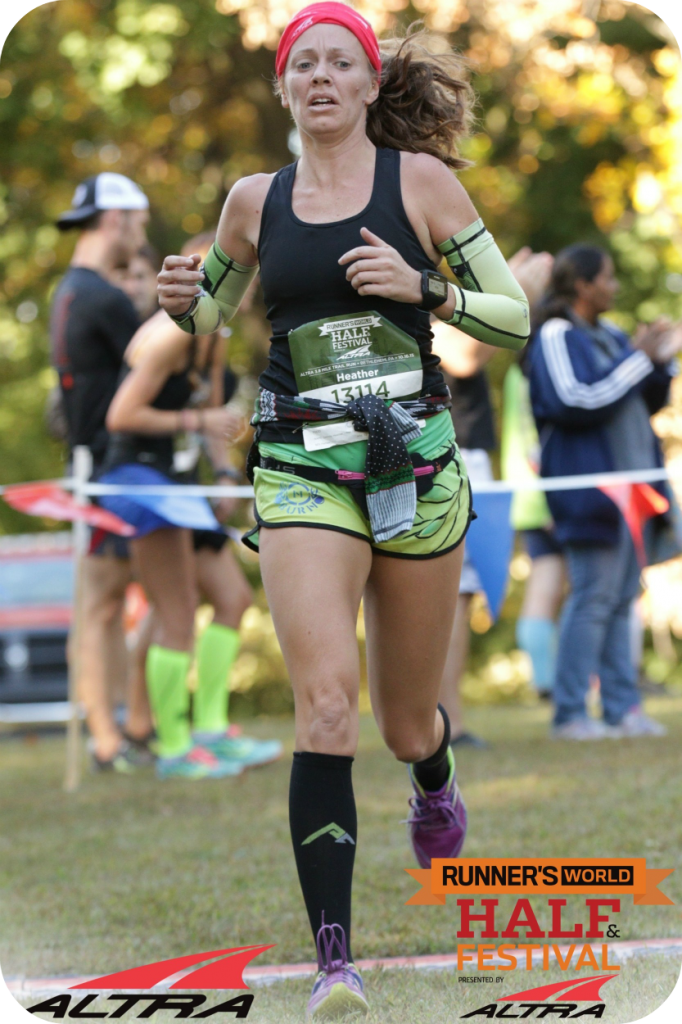 The “clear the way, I might puke!” face. So flattering.

It wasn’t a win, not even close, but considering I truly didn’t train to race, I was really pleased with my results.

Once, of course, I got over the whole “I can’t believe you let them pass you at the very end” bitterness. 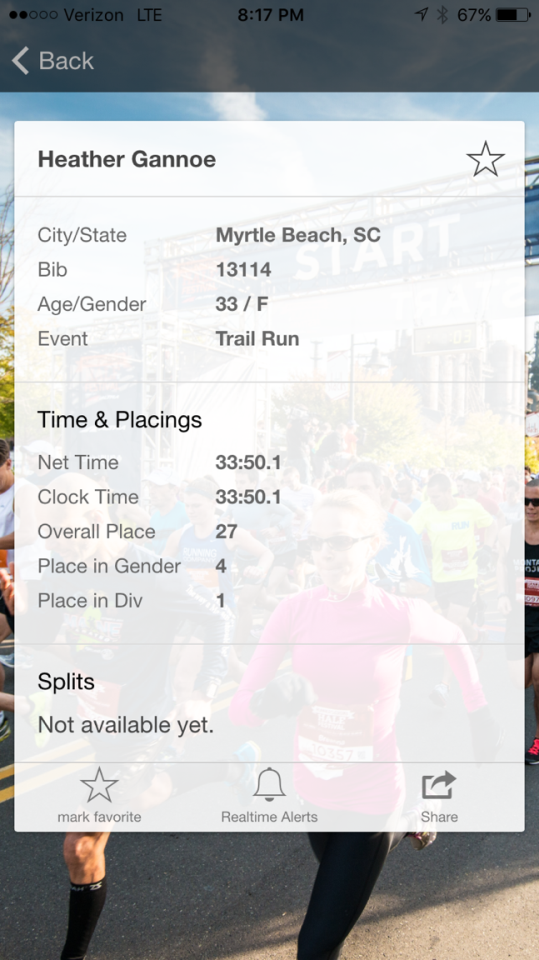 At the finish line we were given water, Ultima electrolyte drink, PIZZA (!), Clif Energy Foods (you know, the pizza gel?), a really nice REI Klean Kanteen, and a reusable REI shopping bag. 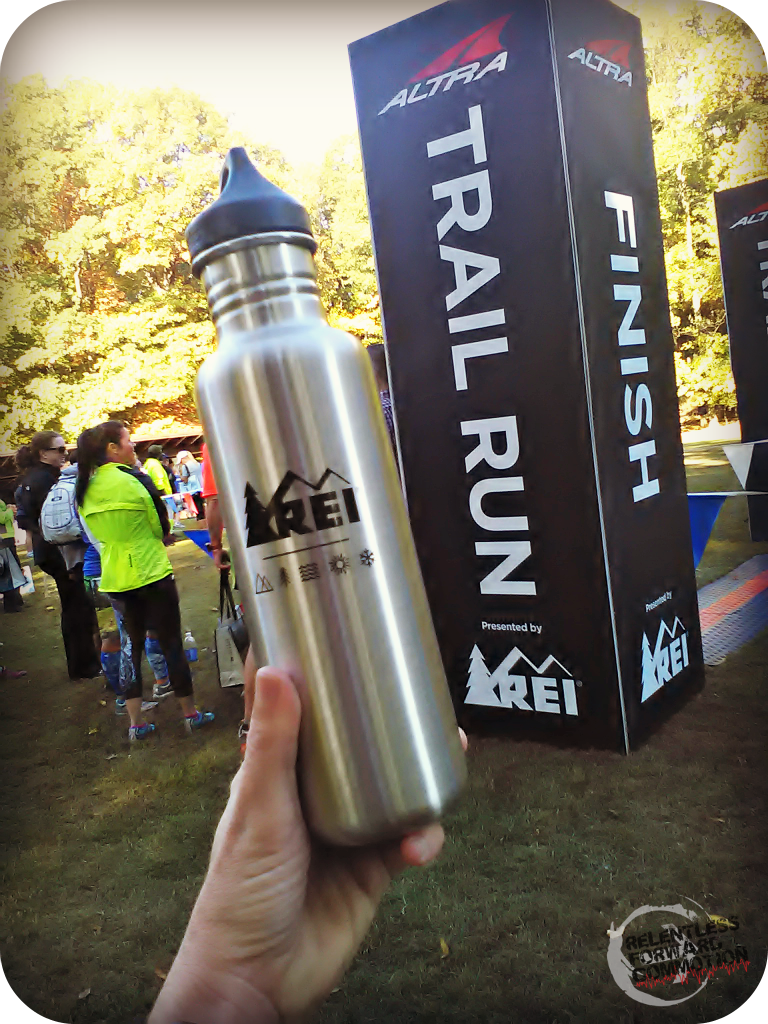 No medals this year, which made me a little sad.  The practical adult in me thinks the water bottle and bag are FAR more useful finishers gifts, but the perpetual 6 year old in me covets shiny new medals to hang on the medal rack.  Regardless, we made due with our REI bags. 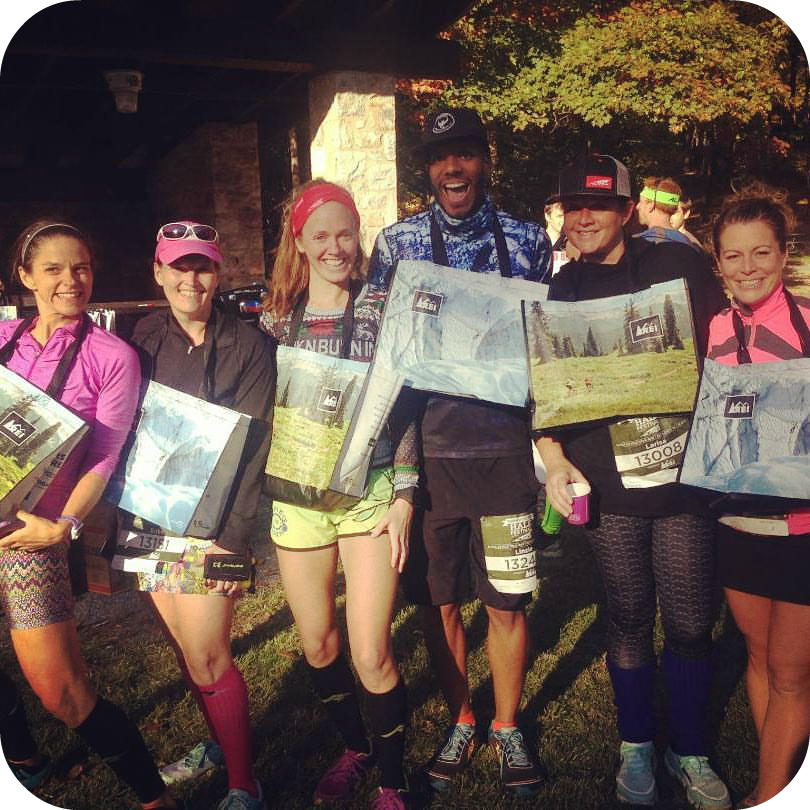 -GORGEOUS trails (the leaves were just starting to change color!)
– Technical footing, which made for a fun challenge
– Just enough people for a true race, not enough to crowd the trails (the good news is, they will limit the field in 2016 as well to prevent crowding).
– FREE race day pictures
-PIZZA!
-Great finish line atmosphere

Cons:
– Single track out and backs were hard to race on, as mentioned earlier, forcing you to go off trail if you wanted to maintain any speed while avoiding the runners behind you coming in the opposite direction.
– This one is totally subjective, but I hope they add a medal for 2016.

The Runner’s World and the Altra crew hit a home run with the inaugural trail race.

If you are coming to the Runner’s World Half & Festival weekend in 2016 (registration is already open!) I would absolutely encourage you to add this race to your list, both trail runners and non trail runners alike.  I hope to be back next year…maybe REALLY gunning for first place this time.