Fact: winter in Vermont is long and cold.  You absolutely must find ways to entertain yourself, or you will succumb to the dreaded condition known as “cabin fever”.  Personally, one of the main ways I prevent winter burnout and depression is by staying active.  Obviously heading outdoors isn’t always an option,  and there are times I want to stay active without an actual workout.

Not what you were expecting?  For a long time I would have agreed with you.  But last year, our family discovered the hilarious fun that is the Wii U.  Like most little boys these days, my sons are pretty hooked on video games.  As a fitness professional, I won’t lie, this makes me cringe.  Our society as a whole sits far too much, and the last thing I like to see kids do during their free time is sit and stare at a TV screen or game console.  The Wii U, however,  incorporates the fun of video games combined with physical activity.  Win-win.

Recently I was asked by Clever Girls Collective if I would review a copy of the new Ubisoft “Just Dance 2015” game for the Wii U.  Now, I’m not a video game aficionado, but if there is one thing I love to do horribly, it’s dance.  Every now and then I like to feature something out of the ordinary run/OCR/adventure box, because believe it or not, sometimes we just like to stay home too. 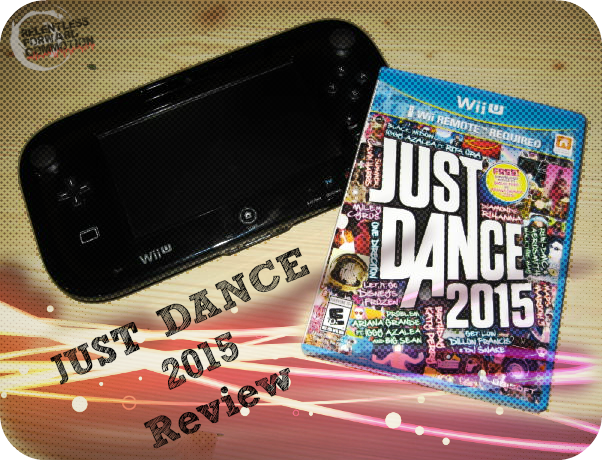 For those of you not-so-into video games like me, let me assure you that Just Dance 2015 is simple: you put the disc into the Wii U, create a profile (easy enough even for my non-gamer-self), pick a song, grab a controller in one hand, and follow the dance moves on the screen.  It really is that easy.  (Though the dance moves aren’t necessarily easy…the Wii does not guarantee dance skills. )

Just Dance 2015 can be played with 1-4 players…but take my advice, and make sure you have plenty of room to move when playing with more than one person.  I’m surprised we didn’t knock each other out with last night’s rendition of Lady Gaga.   With a new tracklist of more than 40 of the current hottest hits and throwback tunes, there’s something for everyone…even those with insanely picky tastes in music.  (Like Geoff.)  Players can dance along to hit songs like “Problem” by Ariana Grande ft. Iggy Azalea and “Happy” by Pharrell Williams, or classic favorites like “Walk This Way” by Run DMC & Aerosmith.  Or my favorite…”What Does the Fox Say?” 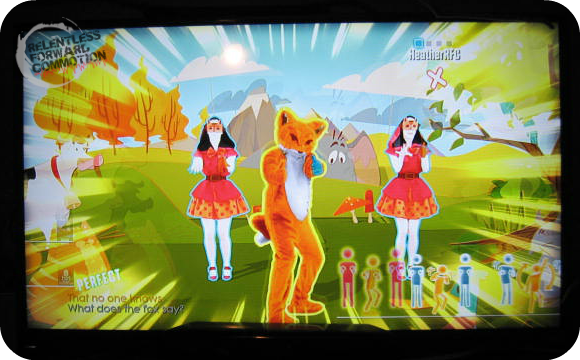 What does the fox say?

While some of the songs are choreographed with dance moves worthy of a professional music video (as opposed to my living room), many of the others include wacky and hilarious moves that are exactly the ones I would truly use if you were to throw me on stage and say “do something”.  Think: the running man meets out-of-control-arms.  I think I laughed about as hard as I danced at the silly moves and hilarious animation.  As it turns out, this was done with purpose: the choreography in Just Dance 2015 was designed to encourage kids and teens to let loose and be themselves.   In fact, to bring awareness to National Bullying Prevention Month, Just Dance 2015 and Stomp Out Bullying have partnered to show people everywhere that “it’s okay to dance to your own beat!”

And dance to our own beat…or off beat…we sure do. 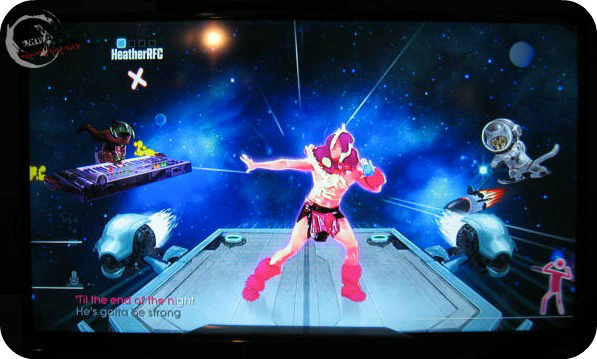 Bonnie Tyler’s “Holding Out for a Hero”.  Please note the outer space cats in the background. I couldn’t stop laughing at this one.

In addition to the 40 songs, the game allows you to “unlock” tons of variations of choreography for the songs, including some “sit down” versions for family members who may not be able to stand for longer periods of time.   It also has a variety of ways to play, including “challenge mode”, where you can have a dance off against players all over the world.  My favorite  is the “playlist” option, where you can pick a certain amount of time to continuously dance (such as 10, 20, or 40 minutes) , and the screen even keeps track of how many calories you burn while dancing.    The great thing about dancing is you can truly get a killer workout out of it if you put forth the effort. 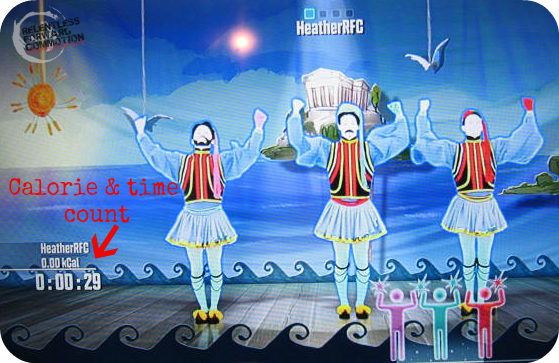 I ended up burning 16 calories during this fun dance.  That’s about 320 calories an hour.  Obviously, there are a number of factors that go into each individual’s unique caloric expenditure, which in turn means the calorie count on Just Dance 2015 isn’t 100% accurate, but it is still a really neat motivator to get your body moving!

The downside:  if kids are involved, you might want to take a good look at the song lists.  There are most certainly some kid friendly songs, such as that “Let it Go” from Frozen (which I still haven’t seen), but there are also some that are mildly suggestive, and while some of the more offensive words are censored…they still might not be deemed appropriate from family to family.

In conclusion: I once again will give the video game world credit where credit is due and say that this game is not only fun, but truly can encourage healthy physical activity in our technology driven world.  Just Dance 2015 is available on all of the major home consoles: Wii™ and Wii U™ systems from Nintendo, Kinect for Xbox 360 and Xbox One, and PlayStation Move for PlayStation®3 and PlayStation®4.    Retail price varies based upon gaming console, but appears to be in the $20-$40 range.

So, let’s hear it, my active (probably an understatement, I should say fellow endoprhin junkies) readers: thoughts on active video games?  Chime in on the comment section below!

I was selected for this opportunity as a member of Clever Girls Collective and the content and opinions expressed here are all my own.