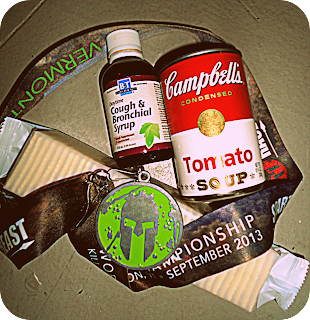 Nothing in life is promised nor guaranteed.  As Benjamin Franklin once famously said: “In this world nothing can be said to be certain, except death and taxes…and Heather getting sick after a big race.” Typically, the general population cuts that last part out when quoting Mr. Franklin, as it doesn’t pertain to them directly, so you’ve probably never heard the entire statement until now.

But it is true.

I’ve been notoriously known for a crappy immune system ever since I was a little girl.  Antibiotics and that gag-inducing strep test swab were year round regulars in my life.  You can ask my family: it wasn’t a Christmas if Heather didn’t have strep throat or bronchitis. It was torture watching others devour the yummy holiday foods, while I could barely speak nor swallow.  And let us not forget the beginning of summer sinus infection: nothing is more heartbreaking to a young teen than being curled up on the couch eating soup and watching reruns of Judge Judy while your friends are celebrating the start of summer vacation with bikinis and barbecues.  Now as an adult, I find it wasn’t a truly epic race feat if I’m not showing off my race medals while holding Kleenex and some Dayquil.


Needless to say, when I felt that little tickle in my sinuses on the Friday BEFORE the Spartan Beast, I knew exactly what I was in for.  As I hoarsely whispered to the cashier at the grocery store this morning while I bought saltine crackers and tomato soup, I appreciate the well wishes, but require no sympathy in this current fight against the sick germs that plague me: I brought it upon myself.

Now of course, I am not alone in this scenario: it has been scientifically documented time and time again that while general exercise is good for boosting the immune system,  prolonged endurance events can trigger the release of stress hormones, which in turn may suppress the immune system. (source).  Of course, proper pre, during, and post race nutrition, as well as adequate rest, can help counter and possibly even avoid these effects…we are not all doomed to sneeze onto the sleeve of our finishers t-shirts.

This morning as I woke up out of my cold-medicine-leukocyte-fever induced coma; disheveled, couldn’t breathe, and likely had dried mucous on my face, Geoff looked at me, laughed, and said “you are adorable”.  You’ve got to be kidding me.  “Why?” I replied, wondering how on earth this look was adorable.  “Because you look like sh*t.” he replied.   Ah yes, there it is: true love.   But I had to laugh too. As miserable as I feel, and as sadistic as this sounds: this past race weekend was absolutely worth the headache and swollen sinuses I feel right now.   I’m certain that the majority of my friends who were at the same race, and have admitted to also suffering the post-race “ick”, would absolutely agree.  We are a sick bunch (pun totally intended).

Anyway, enough mocking my misfortune in the post-race-immune system ordeal, I’d like to hear from all of you:

Do you get sick post-big-race?  What steps do you take (pre, during, and post) to try and prevent catching a cold (or worse) after sustained endurance events?)