In 2010 Saucony released the very first version of their minimally constructed running sneaker, the Kinvara.  It won a ton of awards and runner’s hearts, and has since evolved to include four more versions of the shoe.  This April, Saucony released the Kinvara 5 to the masses.  The biggest change between the Kinvara 5 and the Kinvara 4 appears to be material of the upper: while previous Kinvaras featured a mono-filament mesh that was great for its lightweight and breathable characteristics, the Kinvara 5 has a new mesh that, while still lightweight, offers more flexibility and durability than ever before.

Now, I personally haven’t run in the Kinvara since the very first version back in 2010 (you can check out my original Kinvara  review here.  On a related note, my shoe reviews have evolved as well. )  Not because I didn’t enjoy the first Kinvara (I did, and still have it kicking around) but because I simply fell into other shoes that I really enjoyed.  All of that said, I was very excited to get my hands on the most recent update of the Kinvara 5 to see what has changed over the last 4 years. 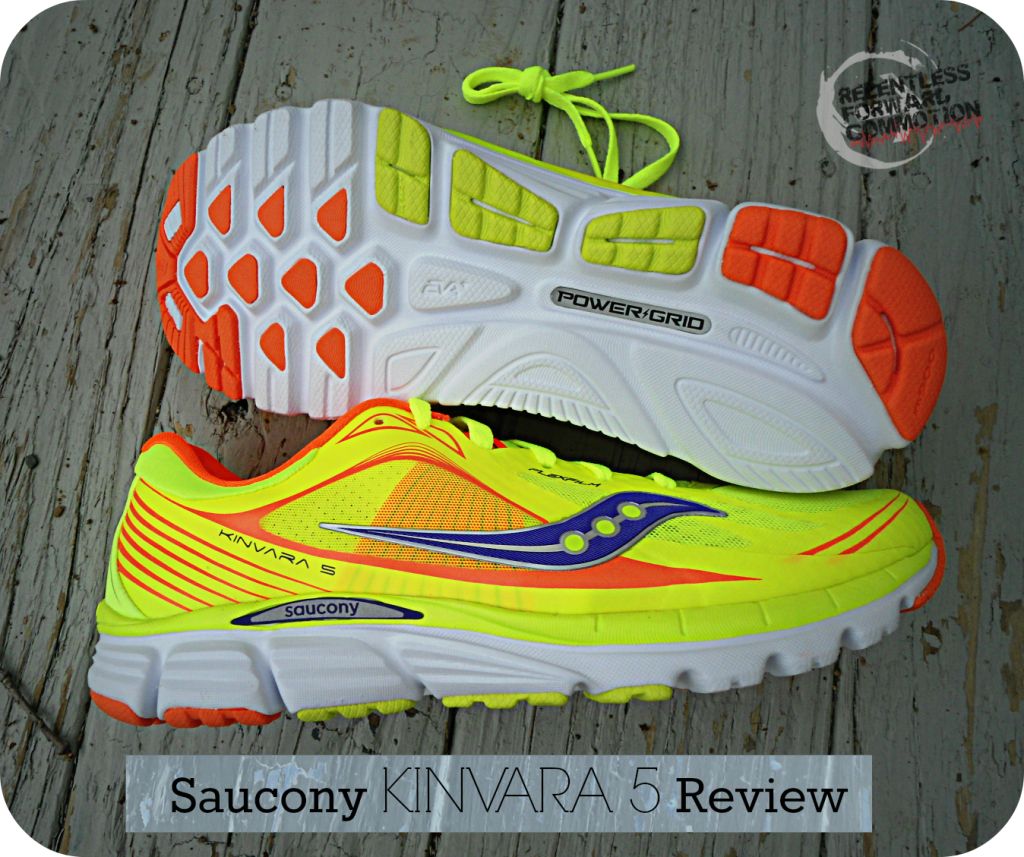 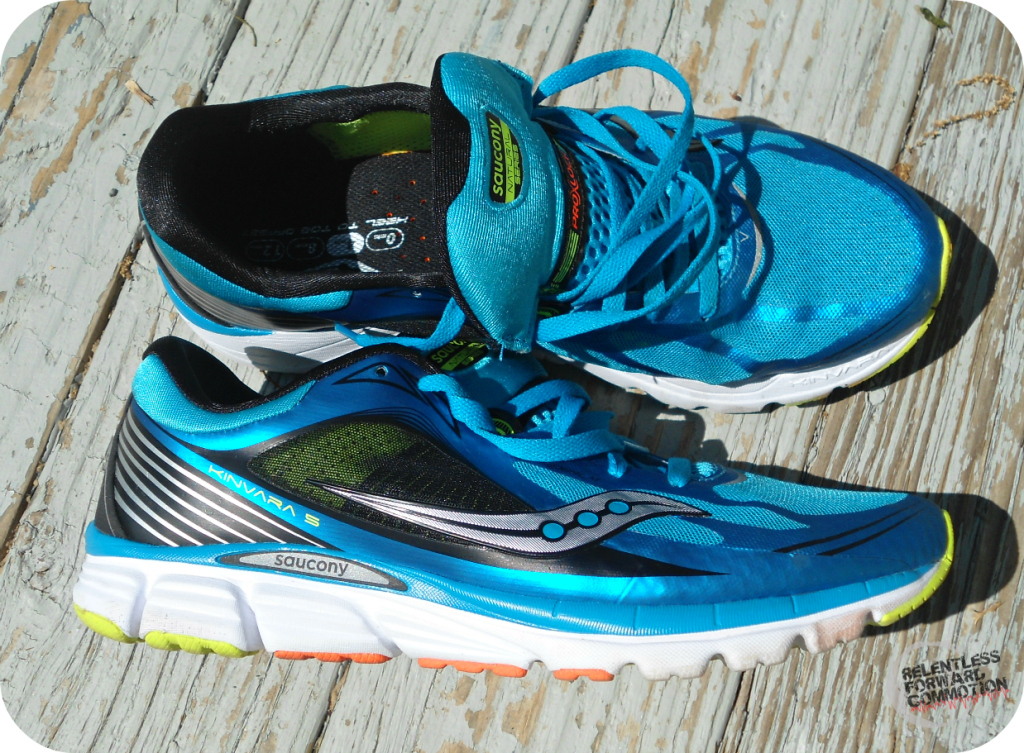 The womens: Citron / ViZiORANGE / Purple.   To quote a woman from my gym: “Do those things come with a battery pack to keep them lit up”?  The pictures do not do the color justice.  They almost assault your eyeballs, which I personally adore. (Don’t worry, there are other color choices for those who prefer not to stand out.

But enough about the visuals, let’s get to the specs and the review.  From Saucony:

I had recently put in a bunch of miles on the Saucony Virrata 2, and was interested to see how the Kinvara 5’s would compare, as they are both part of Saucony’s “Natural Series”.

FIT: As mentioned in  numerous other posts, I have long, narrow feet.  This proves to be difficult in finding a shoe that comfortably fits and stays on my foot.   The Pro-lock lacing system helped keep the shoe tight around my foot, without compromising the fit or flexibility of the shoe in any way (causing gaps, slippage, hot spots, etc.).  Basically, the Pro-lock system extends from the sole as a separate piece between the outer shoe and the tongue, allowing the lacing system to better cradle the foot (as seen in the photo below).

The toebox is not overly wide, but wide enough that I feel my toes and forefoot can splay more naturally than a traditional shoe.  While I did not have a chance to run in the Kinvara 4, I have read a large number of people complain about the narrow toebox in that version, which seems to have been corrected this time around.   The upper has very few seams, and the ankle area cushioned with a spandex like material, thus I am comfortable wearing these without socks. 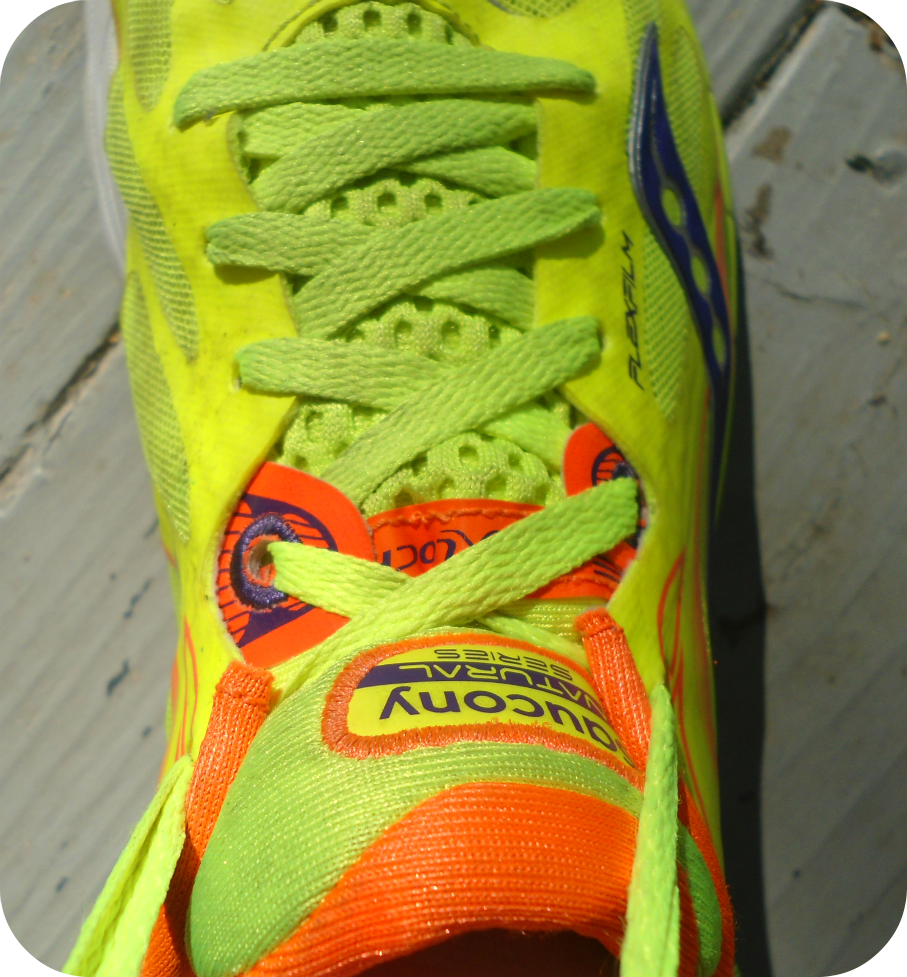 As cliche as the statement is, the Kinvara’s “fit like a glove”.  In my opinion, they fit true to size as well. 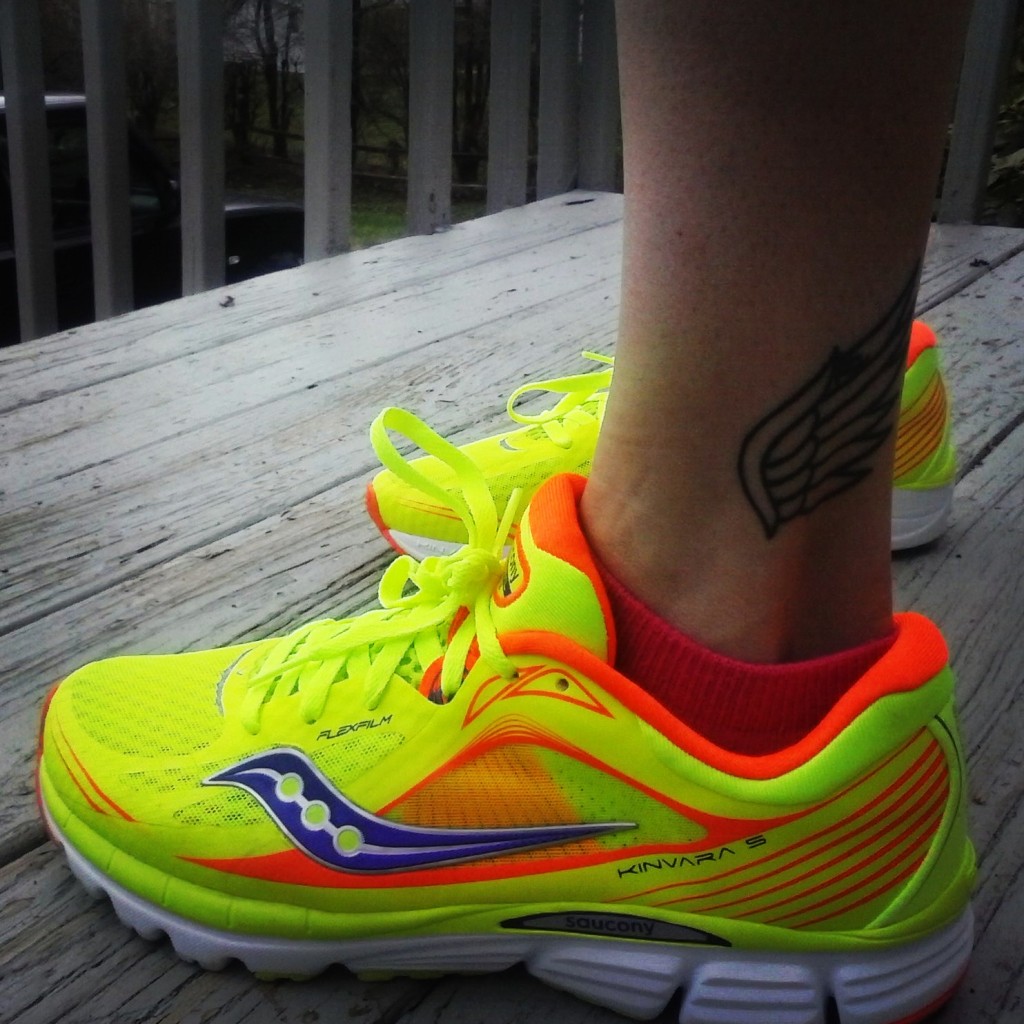 RUN:  Just like the Virrata 2, the one word that comes to mind here is “smooth”.  However, unlike the Virrata, I find the Kinvara to have a bit more cushioning.  While this did not affect my gait (the Virrata has a 0 mm heel-to-toe offset, the Kinvara 4 mm) I did find it to be more comfortable for longer runs as it provided just a touch more cushion and support.

Now, I put these shoes to just about every test short of running an entire marathon in them.

–  They put in numerous miles worth of treadmill runs (zero complaints).

-They put in numerous 4-5 milers on both pavement and packed dirt road (zero complaints).

-They put in a few miles on relatively technical trail (I would NOT recommend them for this- the Kinvaras are a road shoe and leave a lot to be desired as far as tread…especially on wet, debris covered trail.)

-They ran through soaking wet grass and played on an obstacle course (they aren’t OCR shoes, and I wouldn’t recommend them as such, but the point is they performed just fine while wet) 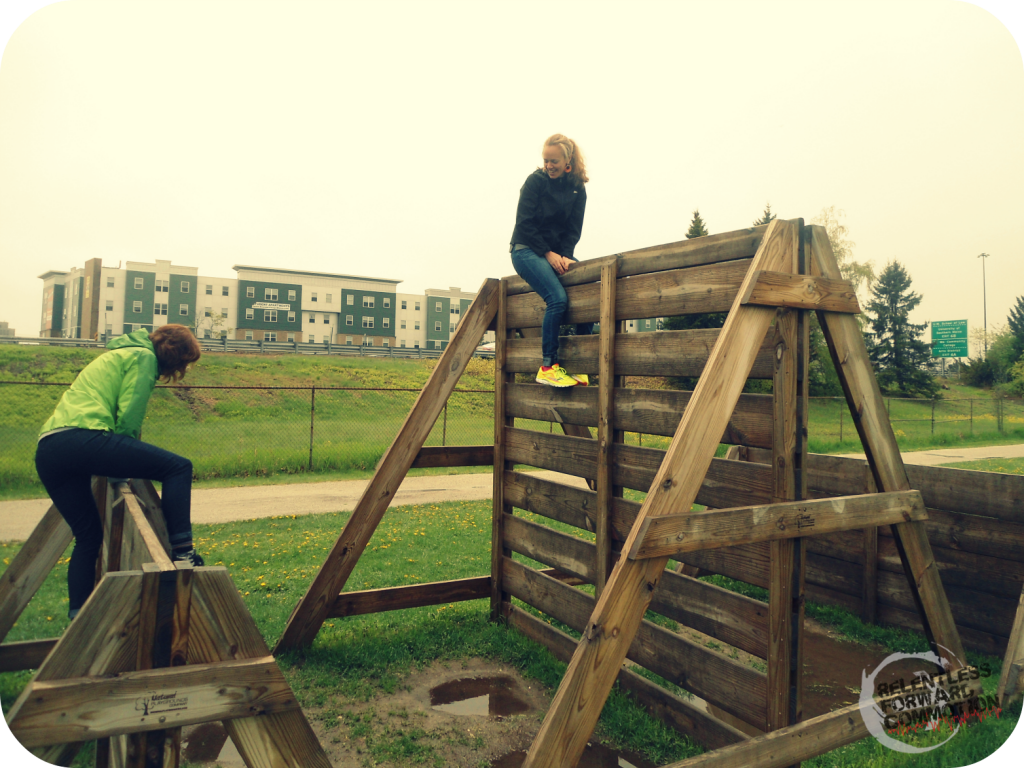 -Immediately after the above photo, I ran 6+/- miles of road.  The shoes dried incredibly fast and breathed very well due to the large amount of mesh.   Still no hot spots, no issues, no complaints. 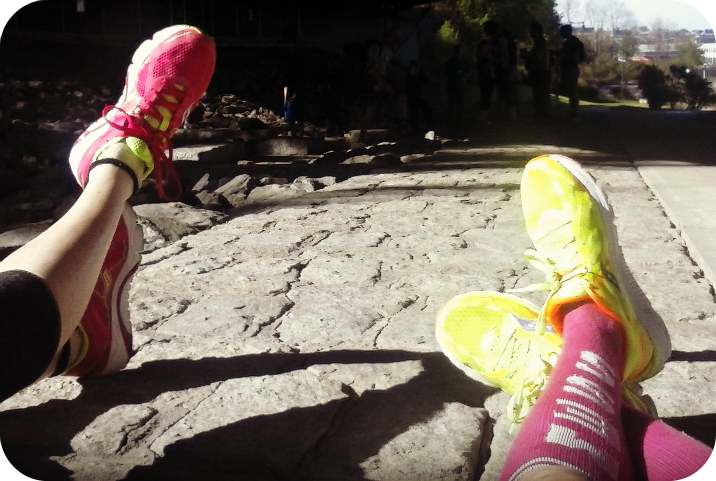 While now not nearly as bright as they were when I first got them (I have a hard time staying away from mud puddles), there is no visible wear, tears, or snags on the shoe.

Bottom line: these are an incredibly comfortable shoe; the kind you simply forget you are wearing (which is why I feel like I don’t have a ton to say about them…they naturally blend right into my run).  If you are a fan of the Kinvara series, then you will love the Kinvara 5.   If you are in the market for a lightweight, minimal shoe with just a touch more support and cushion than “barefoot” series shoes, then you will love the Kinvara 5.  I personally have so much confidence in these shoes that I plan on wearing the Kinvara 5 for my Runner’s World Heart Break Half Hat Trick (5K, 10K, & 1/2 marathon in 24 hours) this weekend.   I will update after the race.

QUESTIONS regarding the Saucony Kinvara 5? Comment below and I will try my best to answer them!

*disclaimer* Saucony provided me with a pair of Kinvara 5’s for review at no charge, however, all opinions stated are my own.