When I was in my 20’s, I used to tell people that I refused to abuse tequila.  I really, genuinely liked the taste of tequila, and wanted to keep it that way.  It was a lesson I had learned the hard way from my previous favorite liquor,  vodka,  in the form of way too many lemon drop shots on the night of my 22nd birthday.  Of course the night ended with my head hanging over a toilet seat, followed by one of the gnarliest hangovers I’ve ever had to this date.  Needless to say, it was YEARS before I could handle even the sight of vodka, never mind stomach the taste.

Therefore it was my genuine LOVE for donuts that prevented me from throwing my name into the ring for the 2016 unofficial Myrtle Beach Krispy Kreme Challenge. 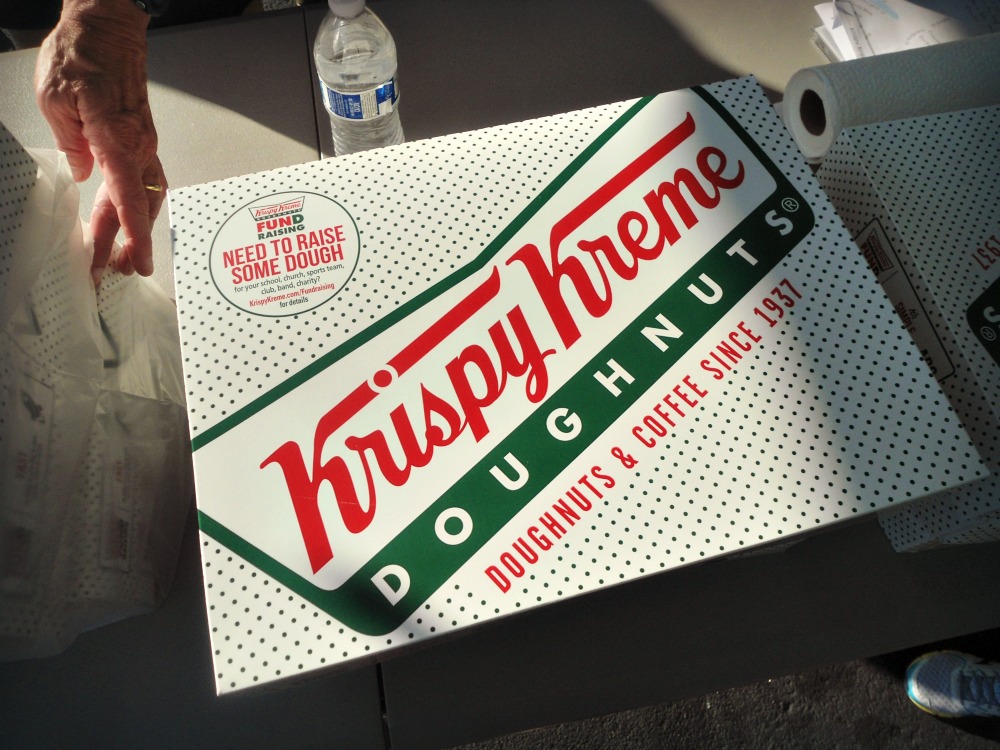 Sure, it sounded fun in theory.  A ridiculous running challenge, totally up my alley.  But the now semi-responsible adult that has gained a tiny bit of foresight as I age envisioned a night ending with my head hanging over a toilet seat (or more likely, a bush on the side of the road), a gnarly sugar crash and sugar hangover, and years before I could stomach the sight of a donut again.

And did I mention how much I love donuts?

This, of course, did not stop me from heading down to cheer on Geoff and my other local running friends while they partook in the glaze filled shenanigans. 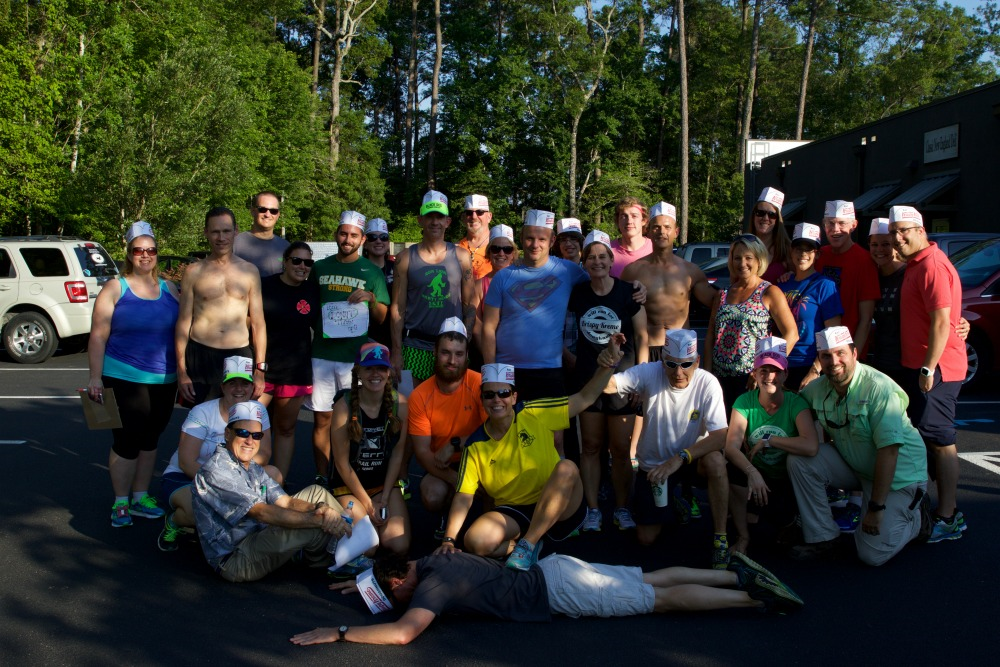 The first ever unofficial Myrtle Beach Krispy Kreme Challenge started as a good natured rivalry between two local runners, and ended with 9 participants toeing the start line.   The rules really were simple enough: run two miles, eat 12 glazed Krispy Kreme donuts with no outside assistance while staying in the “Donut Zone”, then run 2 more miles.    There would be two winners: fastest overall time, and fastest donut eating time. 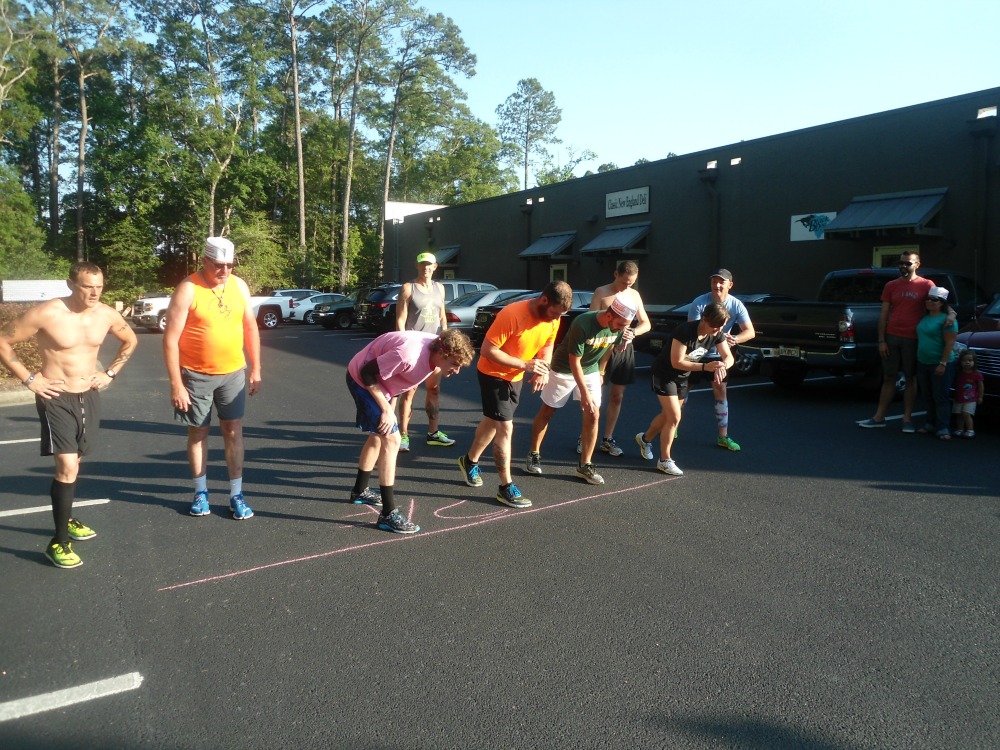 Yeah…they are really starting their Garmins. We have a competitive bunch here.

How does one recap such an event?

There were a ton of jokes, such as “Will this be like a Gallagher show, do the spectators need ponchos?”, “Are you guys gonna want to go out to dinner after this?” and “are these donuts gluten free?”, but mostly it was a few dozen of us cheering on the competitors, all while swearing we would never participate in such a thing.

The health professional in me cringed, as I could nearly feel my arteries crying just watching the donut carnage.  The humanitarian in me scoffed at the gluttony and wastefulness of a food challenge. But the inner 6 year old in me couldn’t stop laughing.  I’m not afraid to admit that sometimes she wins these internal debates.

As to not embarrass my running pals by publicly sharing pictures of them stuffing their donut holes full of Krispy Kreme, I’ll give you pics of just Geoff.  Because as we all know, he has zero shame. 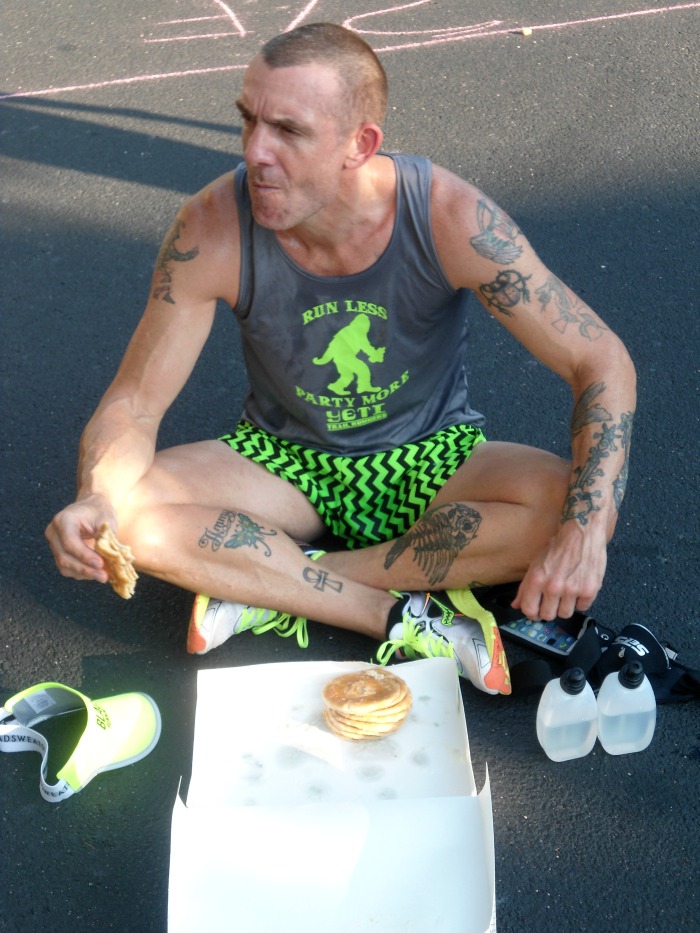 His strategy was the “donut smash”, or, make all 12 donuts into two or three compressed super donuts.  Here’s a video recap:

(For reference, the fastest donut eating time was 6:16 and the winner of the race completed the entire challenge in 32:09.) 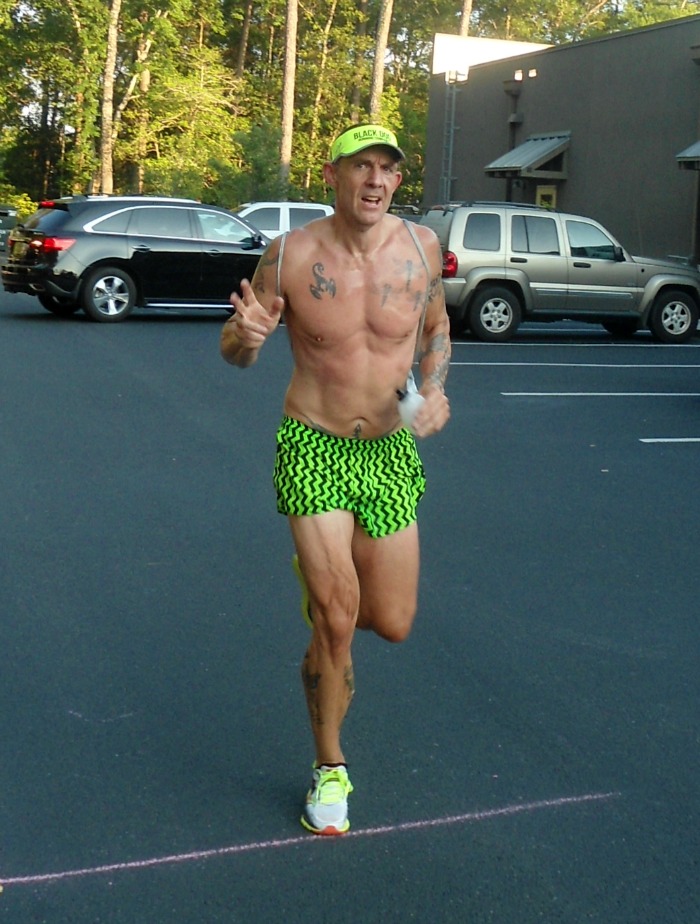 It was gluttony at its finest.  Gluttony and fun.   And then after an official finish, he puked in the woods. 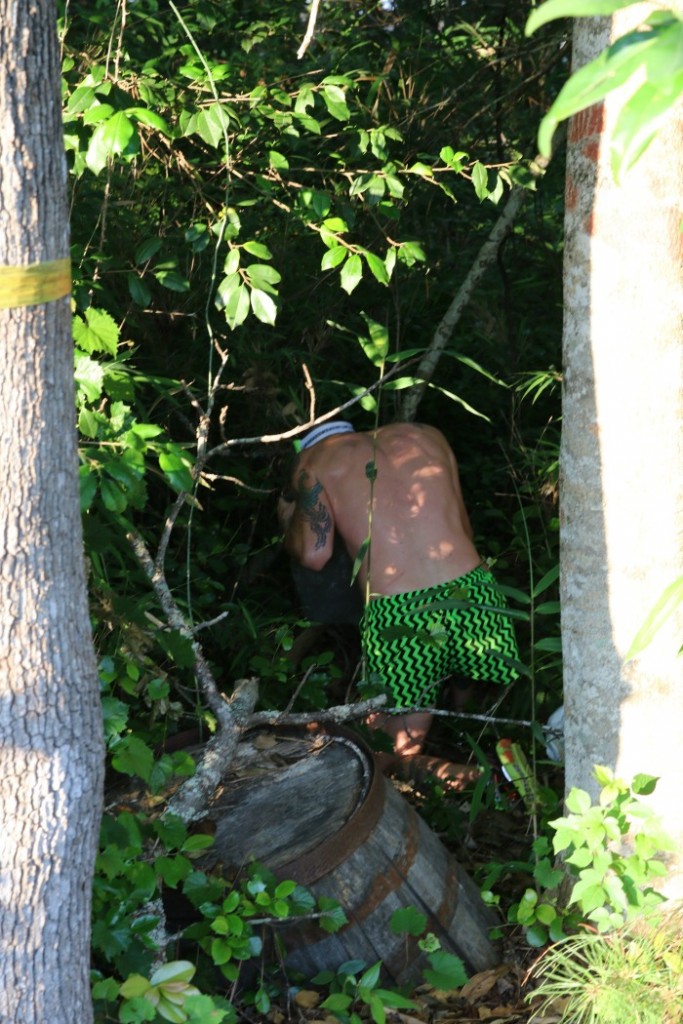 But have no fear…Geoff was fine. Just left questioning another one of his many interesting life decisions. 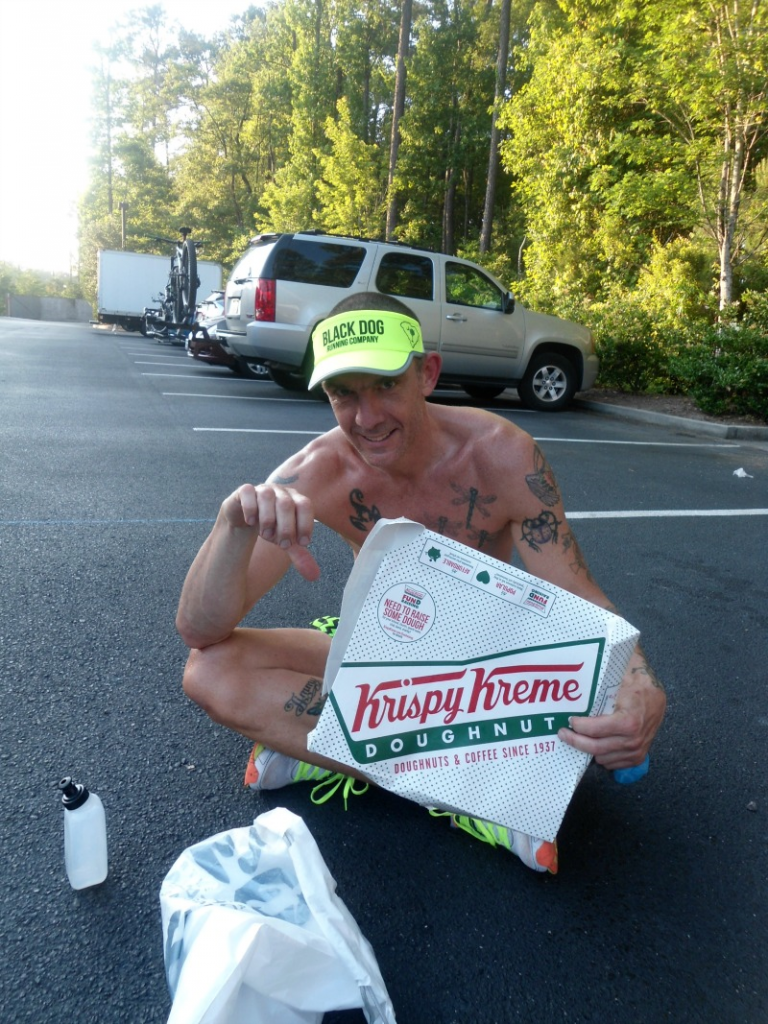 Watching the first unofficial Myrtle Beach Krispy Kreme Challenge reaffirmed the fact that I love donuts far too much to ever abuse them in such a manner.  But that said, it was a fantastic way to bring a group of runners together on a Wednesday evening to bond over some light hearted shenanigans….and about 2,400 calories per person. 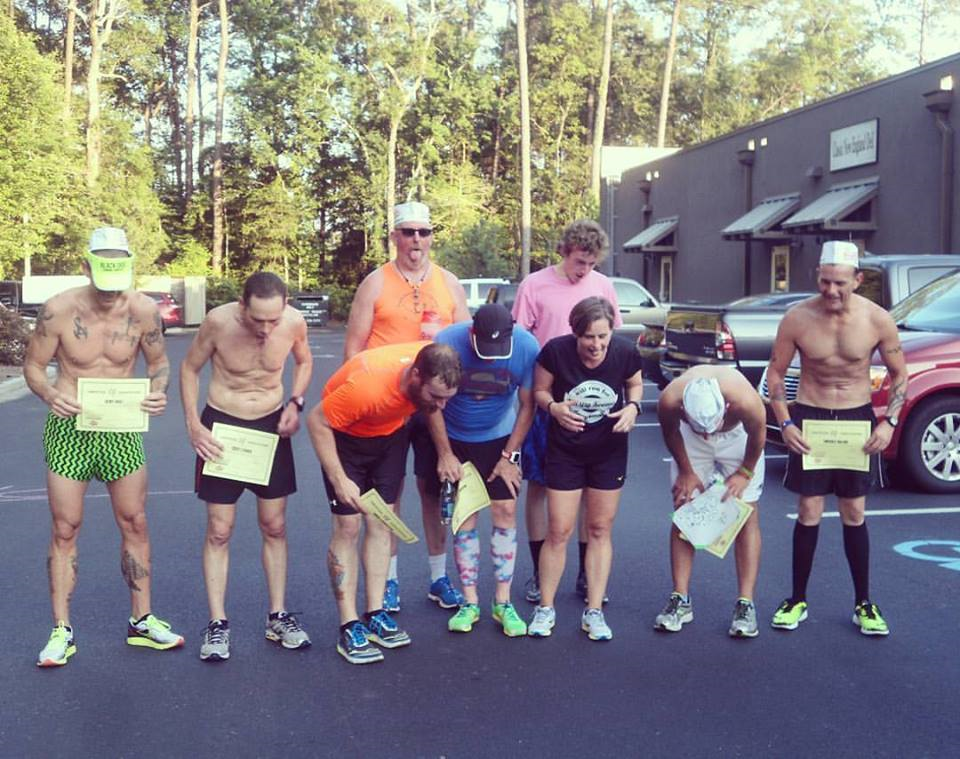 The official finishers of the unofficial Krispy Kreme Challenge!

Oh, and incase you were wondering who won the long standing rivalry? 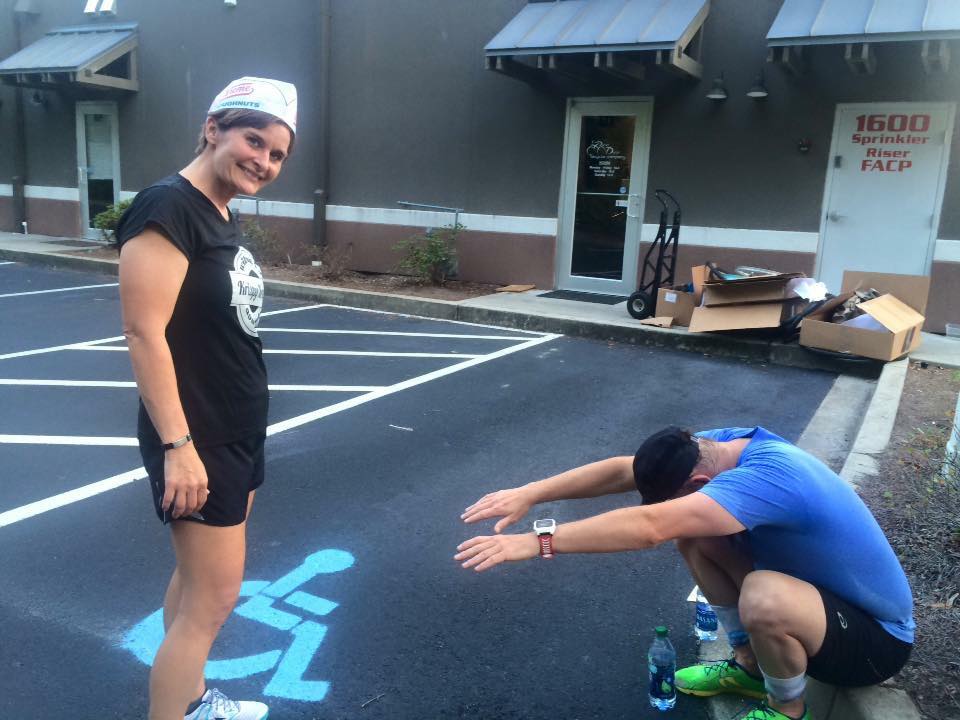 Congrats Dawn.  And thank you for organizing this fun (and funny) event!