Thursday afternoon as we checked in to Tuck Fest at the U.S. National Whitewater Center, we are stopped by some USNWC employees at a table in the lobby asking if we want to sign up to be a part of the guided whitewater rafting race that evening, down some class III & IV rapids.  One of my Tuck Fest goals for this year was to whitewater raft.  I’ve eyeballed, timidly, the whitewater for the last two years at Tuck Fest, and decided this was going to be my year to tackle that fear.   I figured I’d pay the $60 for a day pass and go on the hour long guided tour, the one that starts you off on the calmer side of the man-made river, then eases you into the bigger scarier rapids and waves of the competition channel.  Yet here was an opportunity to bypass all of that – the day pass fee and gentle easing into this semi terrifying adventure – and I was intrigued.

“But I’ve never done this before” I told the guy with the signup clipboard.

“Not a problem” he replied, not even batting an eye.

And just like that, I’m signing my name on the list to be on a racing team. 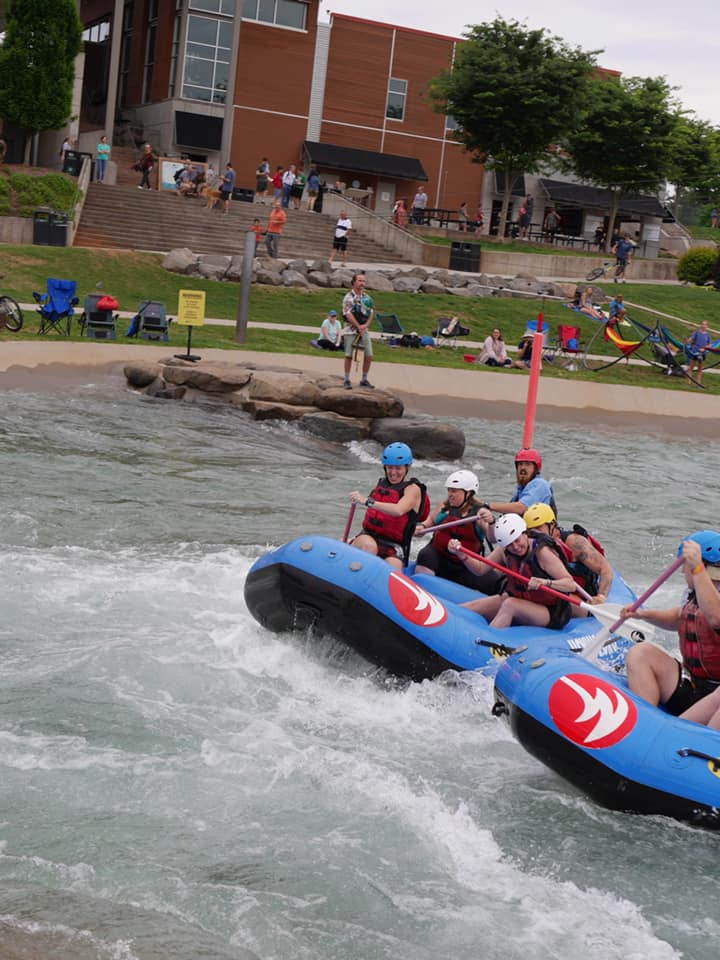 There I am. Yep, eyes are probably closed.

An hour later we’re at the safety briefing with a couple dozen other willing participants, and a handful of rafting guides that we are assured are the “best, most experienced guides at the whitewater center”.   The idea was this: your raft would race down the channel,  having to slalom around two specific poles, and make it to the bottom as a team (i.e., all in the boat).  The competition was elimination style, so if you didn’t lose your heat, you keep going.

The one guide in charge of the safety speech makes no attempt to disguise what we are about to do: we’re going to race.  A cutthroat race at that between some good natured but competitive guides who go up and down these rapids dozens of times a day.  “This isn’t your average guided tour” is mentioned multiple times, as is “you’ll probably fall out of the raft.”  While many people around me are giggling at the bluntness of this altered safety speech, I won’t lie: I’m terrified. 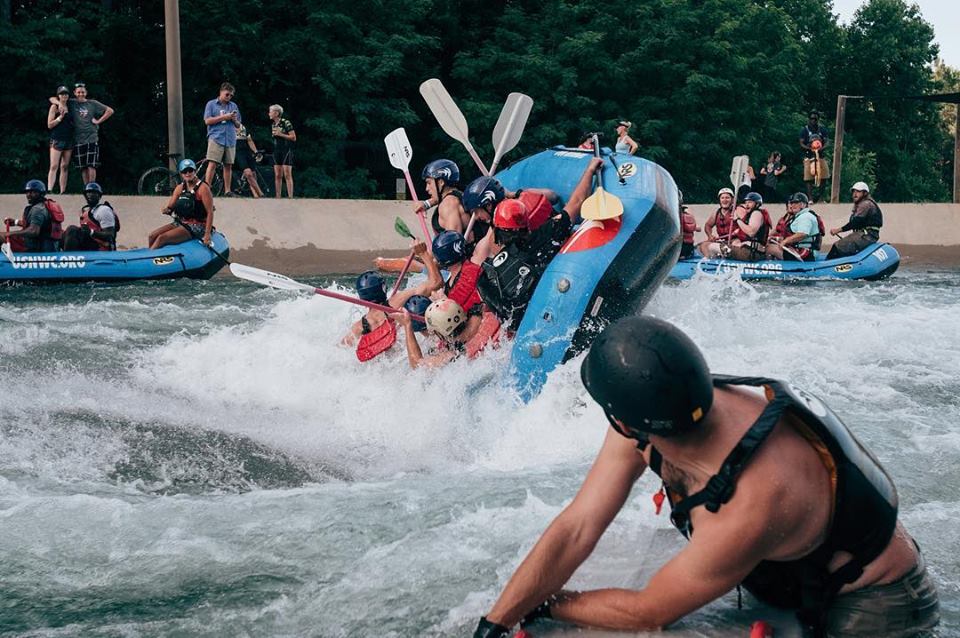 Not me, not falling out of the boat. Photo credit: USNWC Facebook page

You see, I was raised with a healthy fear of water, combined with a little bit of bad luck.  When I was 6, the next door neighbor’s older kid held my head underwater in a kiddie pool long enough to terrify me from ever putting my face in the water again.   When I was 11, I jumped into a friends pool, not realizing it was over my head.  My friend had to pull me out of the pool,  and even though I was choking on water and absolutely terrified, we weren’t allowed to tell her parents for fear of getting in trouble.  I was 12 before I finally learned to swim (so I wouldn’t be the only one at a pool party who didn’t know how), because I downright refused to even try before that.

I was taught to canoe and kayak by my father who loved the water, but didn’t know how to swim, so water safety was stressed to a fault.  As an adult, I taught myself how to surf, and despite becoming somewhat proficient at it, perpetually had the crap beat out of me by the crashing waves.  It never became less scary.  My triathlon days were inhibited by the fact that I never felt comfortable in the water, no matter what I did or who tried to teach me.  So needless to say, the thought of flying out of a giant raft into raging water with the possibility of getting smashed against rocks, and perhaps even being caught underneath said raft, made me want to jump up out of my seat and run.

Which was exactly why I knew I needed to do it. 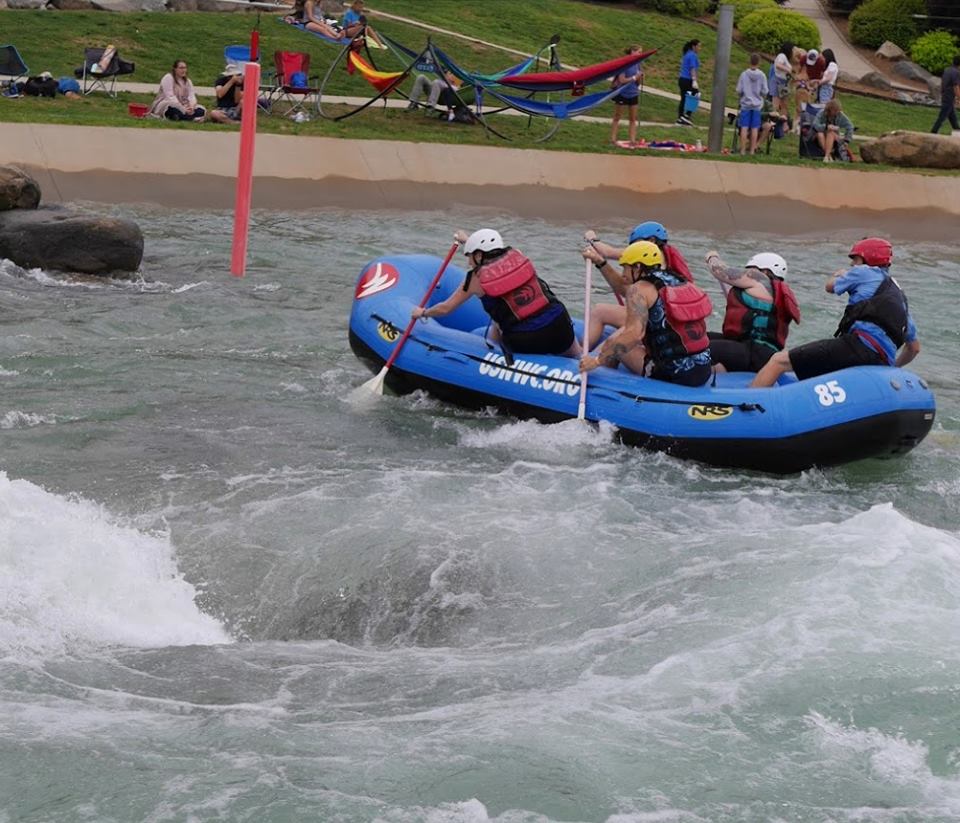 I’d like to put a disclaimer, saying that these amazing pictures taken by my friend Sara, are TOTALLY TAME compared to what the rapids look like in real life. YouTube search the U.S. National Whitewater center to see for yourself.

Instead, I’m trying like hell to push the fear aside and remember all of the information presented to me.  “Toes to nose” and float when you fall out, as to not break your legs on a rock feature.  Unless someone in charge tells you to “swim”, then you swim like hell to whatever direction they are telling you to go.  If you’re trapped under the boat, Spiderman crawl in one direction only, eventually it will spit you out. Don’t let go of the paddle no matter what, it is the most dangerous thing out there and it will break your teeth.  And if someone throws you the rope, throw it over your shoulder and turn around (but don’t wrap it around your neck), so you don’t take in a face full of water.

Oh my god I’m going to fall out of this boat.

Before I know it the speech is over and we are getting fit for helmets and life vests.  I put my vest on and pull it tightly – almost too tight.  The snugness is comforting, kind of like a whitewater thunder blanket.  What’s also comforting is that we are paired with Elijah, a really laid back and happy guide, as opposed to one of those “throw paddles, bump boats, we’re going to win come hell or high water (literally)” cutthroat guides.  Not that I can blame them, of course, there was a WWF-esque championship belt at stake.  Elijah assures us that we probably won’t actually fall out of the boat, and takes the time to teach us how to paddle, since 2 out of 4 of our teammates (myself and our friend Hannah) have never done this before, and the other two (Geoff and our friend Lori), only once.   I’m placed in the front, exactly where I didn’t want to be (don’t most people bounce off the front?) but I keep my mouth shut.  I’m not talking myself out of this.

We line up with two other rafts, facing backwards.  I hear someone yell “go” and then there’s this blur of paddles and white water.  I have no idea what the hell happened, other than I paddled when I was told to, kept my head down, got absoltuely soaking wet, and eventually it was over.  I finally looked up, my heart rate through the roof like I had just sprinted 200 yards, and realized happily: I didn’t fall out of the damn boat. 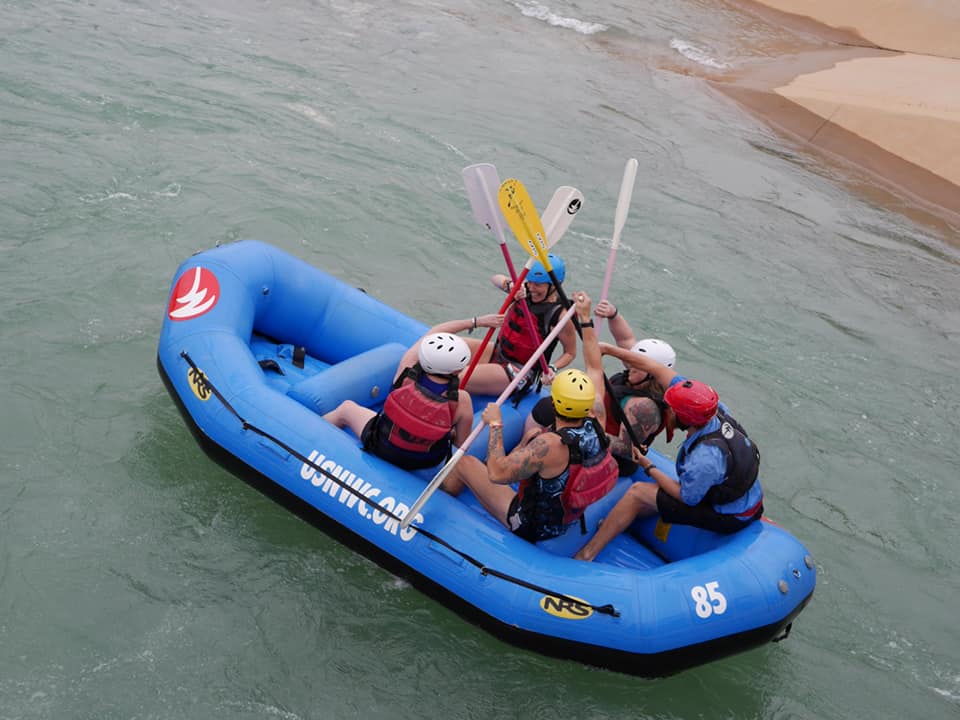 This one is me (blue helmet). Paddle high five for not falling out of the boat!

But there was no time to be excited about that: we came in second place which meant we advanced to the next round.

Have you ever heard a parent say, jokingly of course, that if their second child was their first child, they’d only have one child?  That’s how I felt about run #2 down the competition channel.   It was pure chaos.  At least, it felt like pure chaos to me, I’m sure our raft guide would say it was just another trip down the river. Regardless, I bounced hard out of my seat, thankfully landing inside the boat and not outside.  We bounced off the other boat about half a dozen times. 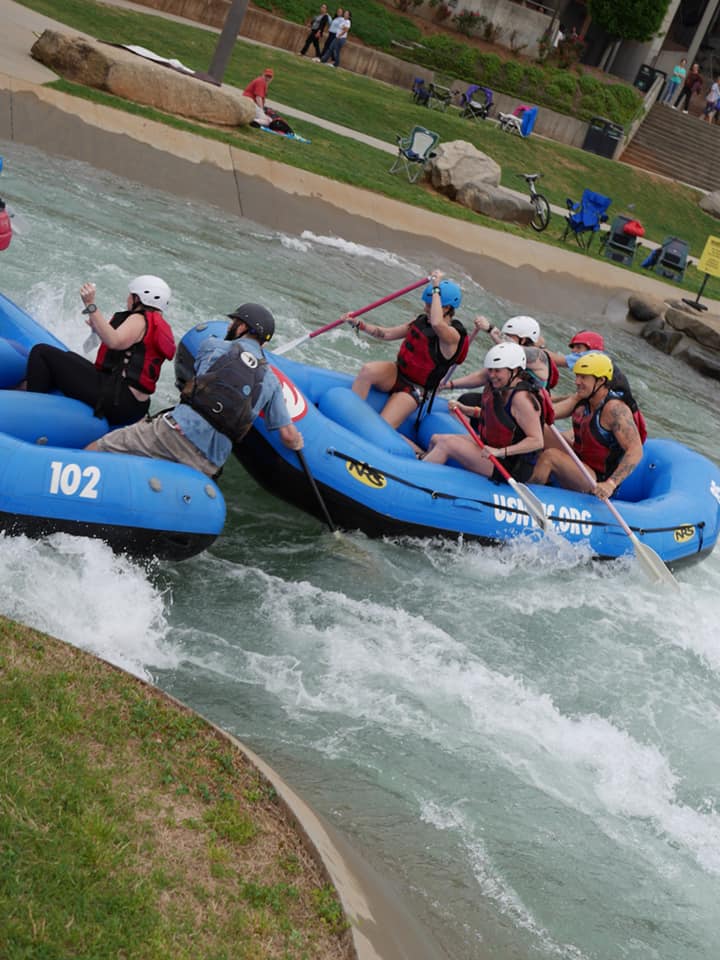 At one point, as we unexpectedly spun sideways as headed into the biggest Class IV drop of the river, our guide said something totally unreassuringly, like “oooooh boy, here we go!”.  I fall into the boat again, and then we’re spinning, stuck in an eddy that we cannot paddle out of. 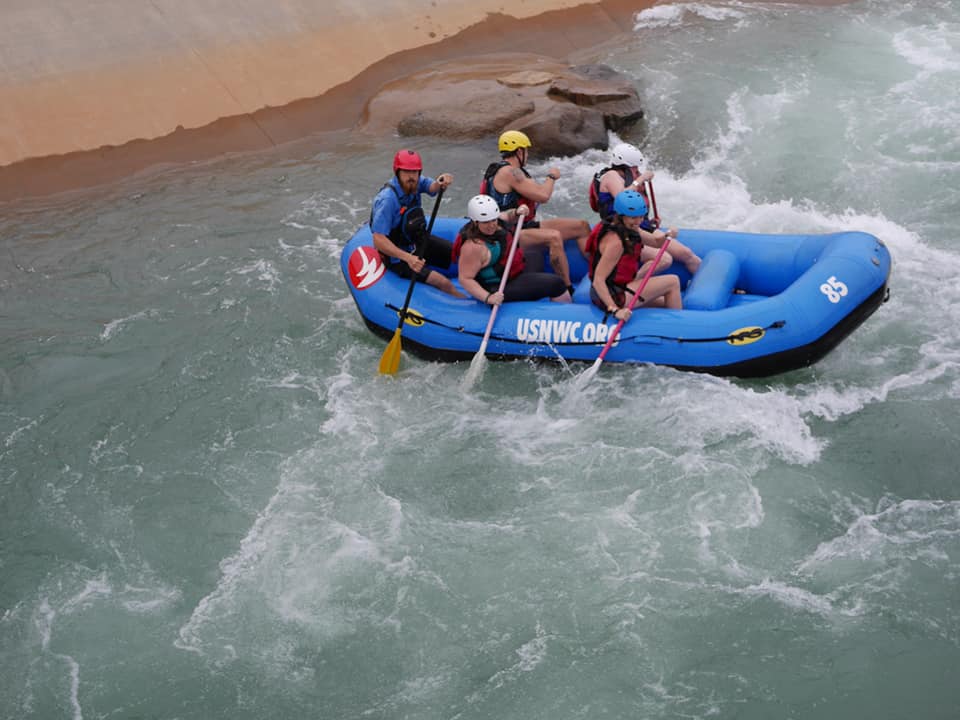 Not the big drop.

And then it’s over.  We didn’t win the second heat, and do not advance to the finals.   Also: I did not fall out of the boat.  And even though the last 15 minutes or so have been a total blur, I’m stoked beyond words that I got in that damn boat.

Moral of the story (or, point of me sharing how I was a big chicken in the white water):

Not everyone is born with the fearless, adventuring gene. I certainly wasn’t.  The list of things that I’m afraid of, daily is occasionally overwhelming.  Just ask my husband. In no particular order, and far from a complete list, here is a sampling of things I’m afraid of: jumper cables, millipedes, tornados, driving down the road with bikes on the bike rack, fire, my kids not being happy, alligators, roller coasters, the Blair Witch actually being a real thing when I’m running ultras in the middle of the night,  hitting trees with my handle bars, never being successful, VO2 max testing, drowning, and as it turns out, whitewater.

We all have things that stop us in our tracks, that increase our heart rate, make our stomachs turn, and put doubt, or worse – fear- in our souls.  But if you live your life in fear of the things that scare you, you might miss out on some incredible experiences.

Do the thing that scares you.