My oldest son will be the first to tell you that it wasn’t him, but his pesky little brother (age 6)  that caused mom’s stomach to be all wrinkly and disfigured.  The youngest takes zero offense to this accusation, in fact, when reminded he often laughs and then grabs at the extra skin that surrounds my belly button.   Yes, in a quite literal labor of love, my second born transformed me from owning a standard issue smooth skinned stomach to something disfigured enough that it makes many people do a double take.   I gained just over 70 lbs during the 9 ish months of that pregnancy, and proceeded to lose it nearly as quickly.   Even the best of genetics couldn’t help me there, the skin was stretched for good.  Add in the fact that my collapsed belly button (thank you again, kid) now has a horizontal scar running through it from a recent umbilical hernia surgery, and it’s safe to say that aesthetically speaking, my stomach is a hot mess. 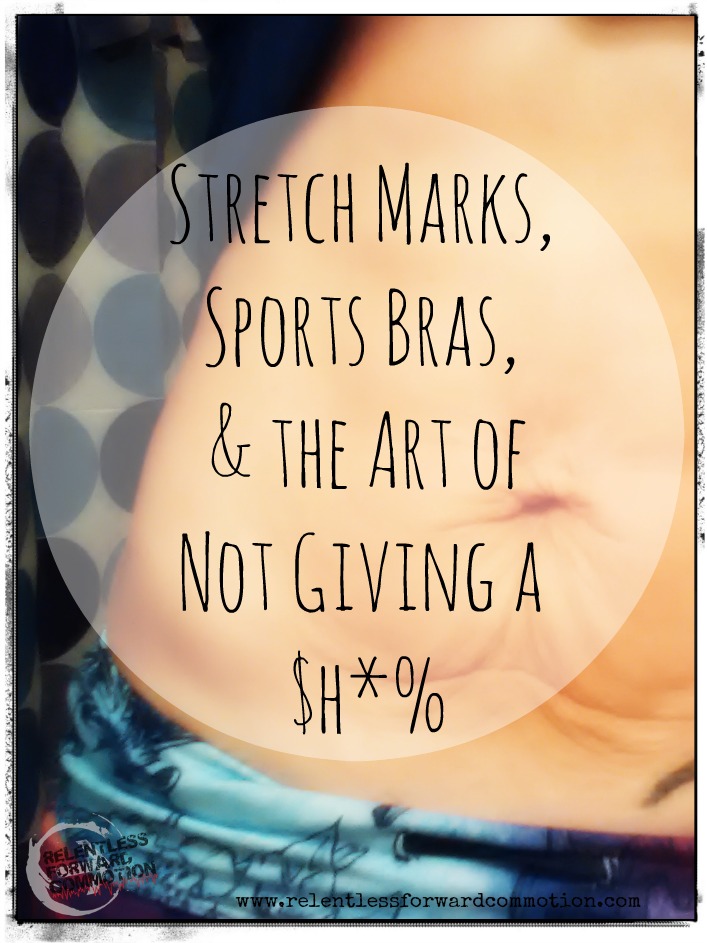 I’m going to stop right here and let you know that this isn’t another soapbox post where I tell you to f*ck the photoshopped norms our society has come to expect and embrace your “mom bod”.   Because I’d be lying to you.    The truth is, I’m super self conscious of my stomach, and I feel like a giant hypocrite because of it.

My job as a fitness professional is to not only teach people how to properly lead a healthy, active lifestyle, but to teach them how to appreciate, cultivate, and love the body they have.  I will be the first to tell a client to not focus on the number on the scale, or the way their thighs look in shorts,  and instead revel in the fact that they can now run 20 for minutes when last week they could only do 10, or celebrate a new bench press PR when months ago they couldn’t lift the bar, period.   Our bodies are capable of such AMAZING things, running really long distances, lifting incredibly heavy weights, GROWING HUMAN BEINGS,  and they should be celebrated, not shunned because of something as trivial as aesthetics.  And I truly try to abide by the same philosophy myself…

…except a lot of times things are easier said than done.

Only ONE TIME perviously in my entire running career have I run in a sports bra…and nothing else.  The 2012 Quincy Half Marathon.  I was at a low weight & low body fat percentage due to a gnarly breakup, I was feeling edgy (or numb, I can’t remember),  and bought myself an entire new INKnBURN outfit simply to muster up the courage to run without a shirt.   I somehow managed to overcome the self consciousness by running really fast and obliterating my previous half marathon PR by something like 11 minutes.  But when the pictures came back, I cringed at the sight of all of that extra skin in motion.  In fact, I was so embarrassed by the picture below, the picture of me hauling along at mile 12 still rocking a sub 7:30/min pace and passing that dude to my left, that I purposefully kept the picture out of my race recap (and off of Facebook, or twitter…you get the idea). 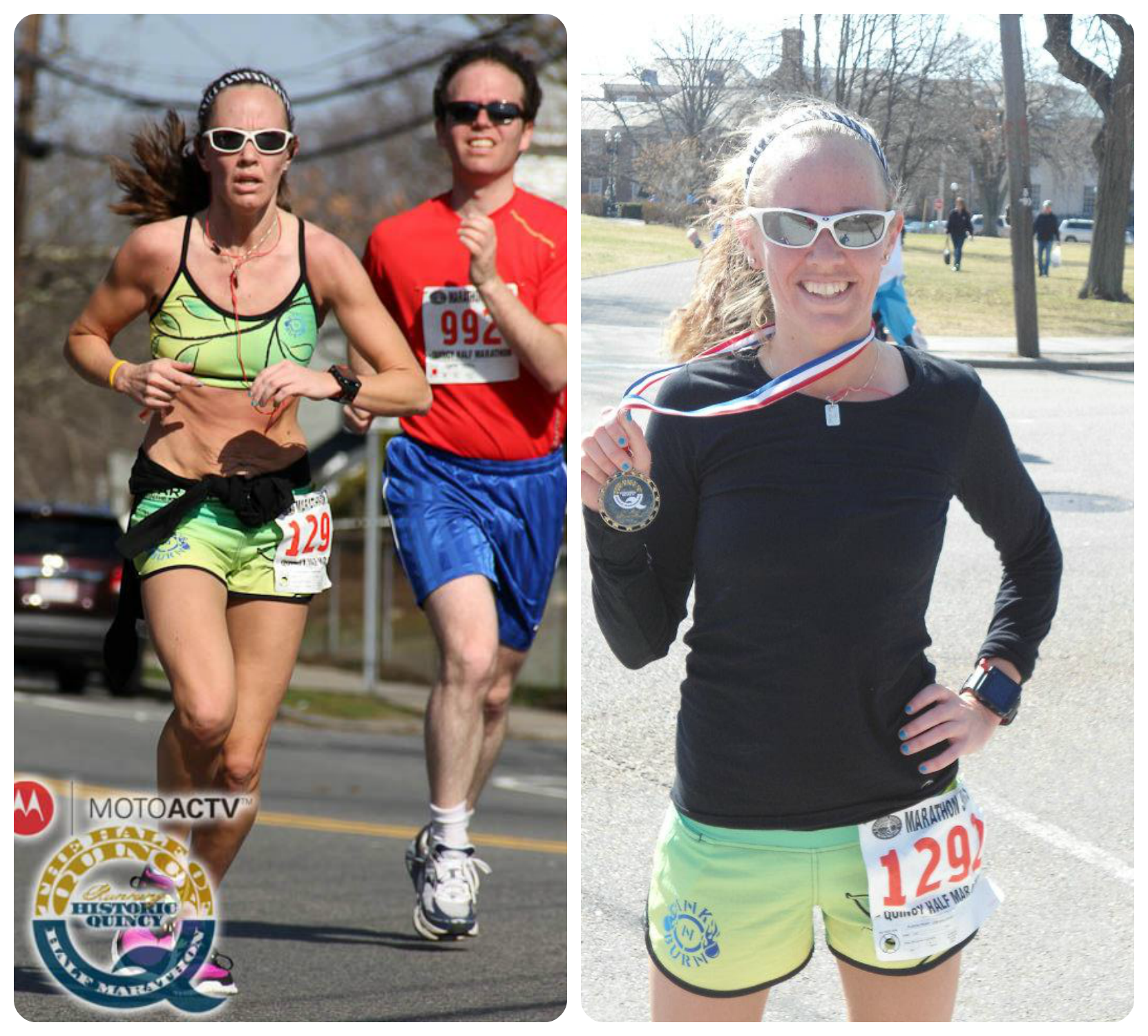 Yes, I realize that is stupid.  But aren’t most of our aesthetic insecurities pretty ridiculous?

As you all know, we recently moved from ice-tundra-Vermont to hot-humid-swampy-miserable-South Carolina.  Okay, miserable is an unfair stretch, I’m actually enjoying my time here thus far.  But it is HOT and humid (as it should be in the South during the summer), so much so that breathing is hard and sun stroke is imminent.   Staying cool is no longer a trivial comfort factor, it’s a life or death necessity.  I suppose that sounds somewhat extreme, but technically speaking, it isn’t far from the truth.  You HAVE to stay cool or your run will come to an abrupt, painful end.

It took me about two weeks of sweating my ass off to work up the courage and simultaneously not give a flying $*@% to finally strip off my tank top before strapping on my hydration pack.   Geoff was mid conversation with a mountain biker in the parking lot, when I came around the corner, ready to run, in nothing but shorts and a sports bra.   He said something along the lines of “woah, you’re running in a sports bra?”  to which I braced myself and defensively (for no reason other than I’ve become accustomed to apologizing for the sight of my stomach) started to spew off  explanations.   Something along the lines of  “well there aren’t that many people out here to see me, and it’s really hot, and so and so has the courage to do it and she has stretch marks like me and …”

He stopped me mid sentence.

I’m not sure I believed him, in the classic partner case of “do I tell her the truth or say what she wants to hear?” but it was disgustingly hot in the midday sun.  So I ran. 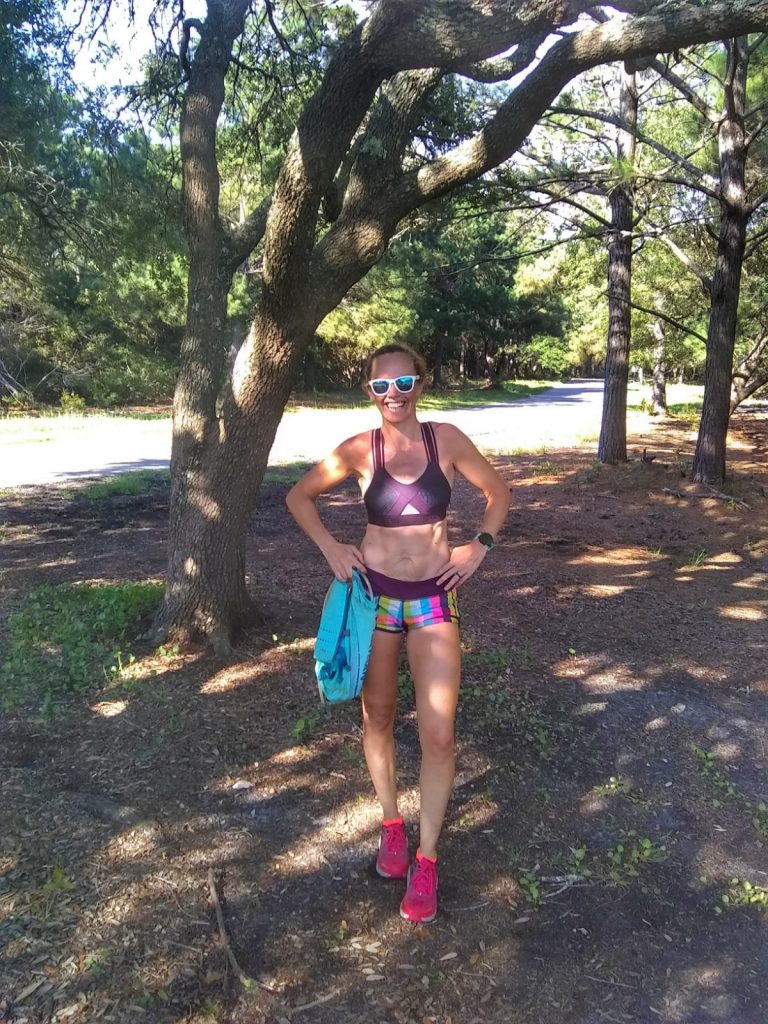 And I realized as I powered down the trails faster than I had the previous few weeks that my embarrassment and fear of other people seeing my “less than perfect” stomach only perpetuated the belief that we should be ashamed of our flaws.  How can I, someone who works in the fitness industry for the sole purpose of helping others, possibly preach the importance of fitness and health over aesthetics, or the importance of loving yourself (physically AND mentally), when I don’t practice what I preach?

Besides, my body is pretty freaking badass, and I mean that in the best way, not the “Maxim” magazine way.

Yes I have stretch marks and scars and extra skin, all of which no exercise nor cream, nor anything short of surgery will ever fix.  No, my stomach will never grace the cover of Shape or Fitness magazine, regardless of my budding 6-pack status.  But this stomach has stretched to accommodate the growth of two human beings.  Clearly with the overpopulation of our planet, we’ve come to take that feat for granted as it happens everyday.  But think about how amazing the not so simple act of creating life actually is.   I’ve always disliked the reference to stretch marks as “badges of honor”, but in a way, they kind of are.   “Check this out, I battled childbirth…and won! Twice!”

This stomach has taken me through a 50 mile ultra marathon, 8 marathons, 25+ half marathons, and so many shorter distance races, obstacle course races, and triathlons that I lost count.   This stomach has scaled 12 foot walls and army crawled under hundreds of feet of barbed wire. This stomach is working on building enough strength to successfully complete a toe-to-bar in CrossFit, when just 4 months ago it was cut open with a scalpel and subsequently stitched back together.

One day it’s going to take me through a 100 miler (edit: done, twice.), and some muscle ups, and whatever other adventures I find myself on.  Maybe I’ll even roll a kayak or climb Mt. Everest.  The possibilities are endless, but you know what won’t stop me? The fact that my stomach doesn’t look like it once did.

I want to clarify that this isn’t a post about modesty; by all means do whatever makes you feel comfortable.  This post could apply to so many of the self esteem issues that many people struggle with.  But the key message here is “what makes YOU comfortable”.  YOU.  Don’t let yourself feel shame from the superficial judgments that others may or may not even have in the first place.   (As I mention in this post to new runners, most people are cheering for you, not jeering, despite what our inner voices might be saying.  We truly are our own worst critics.)

I didn’t mean for this post to turn into a soapbox rant, but here I am shouting:

Push yourself to be better every day, but also love yourself for exactly who you are in that very moment.  Nothing is more badass and beautiful than self love.

(edit to add: I ran the naked 5K.  Read that race report HERE)