Ignorance is bliss.  Never has this sentiment rang more true than it did at yesterday’s race.

I’ve got this crazy group of friends, the New England Spahtens, who have a race calendar that could make your head spin. Every single weekend there are a handful or more races listed that some, if not most, members plan on attending.  When my NES friend Tara (you may remember her as this bada$$ mom) mentioned the 7 Sisters Trail Race about an hour south of where we live, I thought to myself “hey, that should be a great training run”…and nothing more.

IGNORANCE: Sure I briefly looked at the website. Yes I saw the bold disclaimer of “twelve very hilly, rocky miles” at the very top of the page. But I honestly didn’t think twice about it. I mean, Massachusetts isn’t exactly known for it’s brutal mountain trails…or mountains, period. And I’ve tackled some pretty big trail races and steep climbs in the past. Further, when I fell ill a few days before the race, but felt significantly better (though still not 100%) on race morning, I again didn’t think much of it. This was just a training run, it was OK if I wasn’t feeling fully well, I’d just take it easy. It was just a small, local, trail run through the “hills” of the Holyoke Range.

BLISS: I’m glad I had no idea prior to this race that Runner’s World Magazine had not only heard of the 7 Sisters, but has named it the “Hardest Up/Down Race” on their “America’s Best Trail Races” list. I’m glad I had no idea, until moments before the race, that parts of this technical trail would include hands and knees climbing. And I’m CERTAINLY glad that I missed this sign at the registration tent:

RACE DAY: The weather was simply beautiful.  Geoff and I made the quick drive down, registered, and met up with some of the aforementioned New England Spahten crazies.  As we prepared for the race, I still had no idea what I was up against. I had seen the finishing times from years past (some upwards of 6 hours). I had read about the 3700 foot elevation change over the course, and while it certainly seemed challenging, I still had no idea how much of a challenge it would be.

We meandered down the hill towards the start, took turns taking care of “business” in the woods (three porta-potties for 400 ish runners with minutes until the start? You do what you’ve gotta do), and then lined up, ready to tackle all seven of those “sisters”.  I wasn’t nervous, not even the tiniest bit.  Just ready for a nice, relaxing, training run.

The 7 Sisters, however, had another idea.

The starting line? It was on a hill.

And then we continued to climb uphill.  And not only uphill, but over basalt rocks that meant trying to run or dodge the trail was a futile, or simply utterly dangerous task. 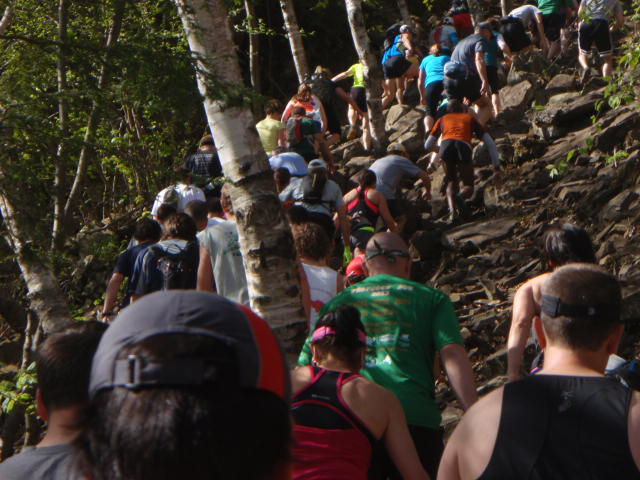 The crowd was thick for the first three miles of the race, but to be quite honest, I didn’t particularly care.  When people ahead of me were walking, it was because walking was pretty much necessary for all except those maniacs (I say that out of jealousy and awe) in the very front of the race pack.  If you needed to pass someone, it was typically not an issue to do so.  I’ve come to learn that while runners are indeed a special breed of their own, each individual race typically has a different atmosphere.  7 sisters seemed to be comprised of trail running enthusiasts, as well as athletes and health seekers who wanted a true challenge.  EVERYONE I encountered was friendly and enthusiastic, even when utterly sucking wind. 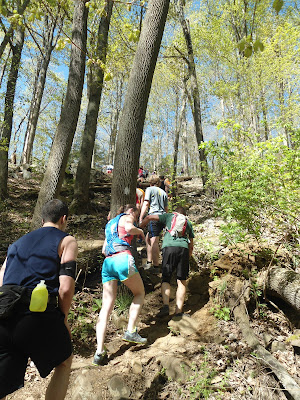 2) My “take in nutrition every mile” running buffet approach of race day nutrition would NOT apply to today’s race. The first mile of intense climbing took just over 15 minutes, and that would be my fastest mile of the day. Somewhere around mile two I almost started crying for some ridiculous reason, I think Geoff had run ahead to pee in the woods somewhere and didn’t mention why he was taking off. I, already delirious from my blood sugar crash, thought he was leaving me to “embrace the suck” (this race was already killing me) on my own, and became offended.   Here’s the thing folks: I race by myself and for myself 99% of the time, and honestly wouldn’t be bothered in the slightest if he wanted to race at his own pace. Thankfully I recognized the “bonk” induced drama, and started stuffing my face full of nutrition. Once the calories and sugar hit my bloodstream about 15 minutes later, I was a new woman. 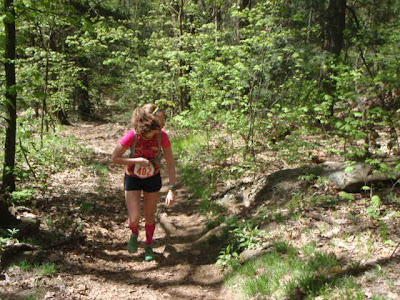 We climbed and climbed, with the occasional relief of a downhill.The race was an out and back course, and I joked with Geoff “watch, I bet the lead runners pass us when we are around mile 4”.  I couldn’t fathom how anyone could “race” on a course this rugged, but sure enough, these guys were flying.  Part mountain goat, no doubt about it, and I am in awe of their abilities.  Sure enough, at mile 3.8 , the first 3 lead runners passed us.

By this point, the crowd had significantly thinned out, which was fortunate, for the next mile and a half we would half to share the single track trail with runners that had already reached the turnaround and were headed back towards the finish line.  The mile (give or take) headed into the turn around/aide station was almost entirely downhill, and at that point, it felt AMAZING.  I felt bad for all of those who were headed in the opposite direction, as their faces were all pained with the burn of the climb, while I cheerily shouted encouraging words to them.

Somewhere around an hour and forty minutes later (note, 1:40 is my half marathon PR, just for a reference of how difficult this particular course is) we had arrived at the turnaround aide station.  One of the volunteers said to me “wow you look great for having just run 6 miles!” to which I replied “don’t be fooled, that last mile was all downhill!”.  And that’s when it hit me: the last mile was all downhill. The next mile will be entirely uphill.

With the help of the awesome volunteers, I refilled my hydration pack.  It was already starting to heat up, and I couldn’t believe I had chugged almost the entire contents of my pack.  I took an endurolyte capsule, and refueled with some pretzels and my new favorite go-to: mango-banana buddy fruits (those pureed fruits in a pouch designed for little kids, adored by endurance athletes).

And then we headed back up the hill.

The long uphill wasn’t as horrible as I thought it would be, however, it’s effects would be felt soon enough.  In fact, the first real pain I started to feel was on the downhills.  Not only were my knees and muscles crying in pain, but navigating the downhills proved to be far tougher than they were on the ascent.  Steep rocks and cliffs are much easier to climb up than down. 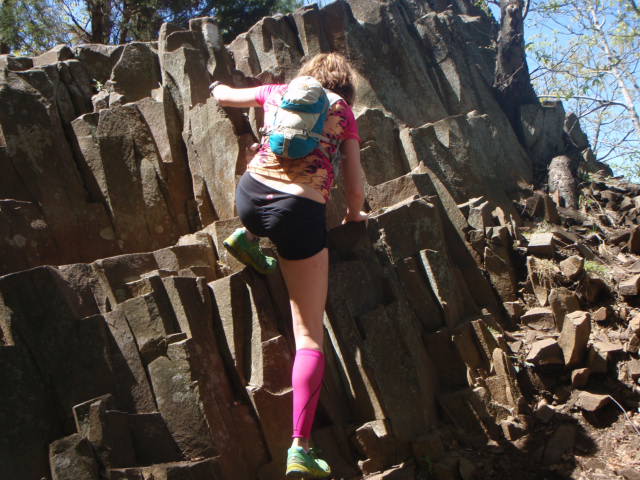 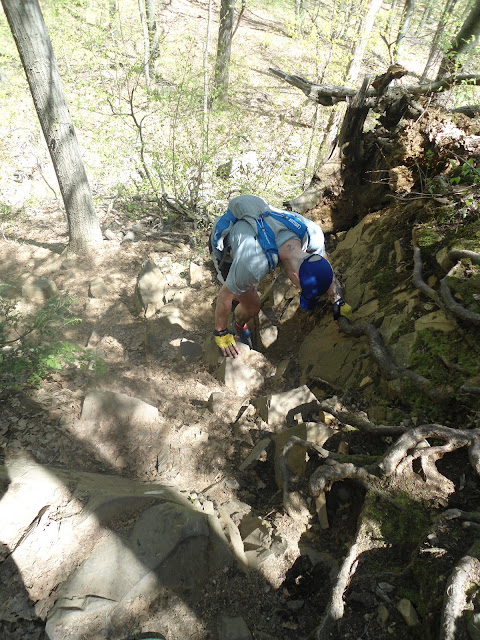 Despite trying my best to keep up nutrition and hydration, by mile 9 I was simply spent.   My legs hurt in places I forgot was even possible to hurt.  My lungs were tight and a deep breath was hard to come by, a sharp reminder of the cold virus still lingering in my body.   I went into survival mode which proved to be a help and hindrance at the  same time.  Completely zoning out of the pain I was feeling absolutely helped me keep moving forward.  Reminding myself that I love what I do, that this was making me stronger, and that it was a beautiful day on a beautiful course kept the “this really sucks” voices in my head at bay.  And when all else failed, I counted steps.  30 paces up a hill before I could stop and rest.

The hindrance of this method came on the flats and downhills. As soon as the trail allowed, I forced myself to run. The lack of focus resulted in me falling flat on my face not once, but twice, while tripping over rocks and roots that my tired feet just didn’t want to clear during their shuffle.  One fall was a clumsy stumble into the bushes.  The second, a sharp and quick fall where I hit the ground hard.  Blood was shed, but I got up and kept moving forward.

Finally, we hit the last, and probably most painful, downhill, and could hear the cheering of the finish line ahead.  I was never so happy to be finished with a race.  These 11 ish miles (seems everyone’s GPS recorded a shorter course than advertised) were far more painful than any full distance marathon I’ve ever run.  In fact, I felt more beat up than I did after the first loop of the Spartan Ultra Beast.  Certainly, some of that may have been due to my less than stellar health.

HUMBLED:  My finishing time 3:57:56.  Over two whole HOURS than my best time at a race even longer than this distance. I placed 333 out of 386 runners.  As a normal mid to front of the pack runner, this was a slap in the face to my ego, no doubt about it.   I train hard, I’m in good shape, I have the ability to run quite fast.  But, to quote Robert Bonazoli,another fellow NE Spahten who took on 7 sisters yesterday: “there is no way to train for brutal hills & technical trails EXCEPT doing tough hills and trails, and if I want to improve on those things I goddam well better start working them in seriously.”   He speaks the truth.

IN SHORT:  The 7 Sisters race was absolutely beautiful, and wonderfully organized.  Aid stations at mile 2, 4, 6, 8, and 10 with plenty of water with friendly volunteers.   As I hobble around the house today, dreading any activity that may require me to navigate stairs, I realize I am so thankful that we showed up to the 7 Sisters Trail Race yesterday. Sometimes a humbling, eye opening race is exactly what you need to light another fire in your training.  And 4 hours or 40 hours, I’m pretty proud of myself for running such a tough race, period.

I’m just glad I had no idea what I was getting into at the start.