“Run when you can, walk when you have to, crawl if you must; just never give up.” ~Dean Karnazes 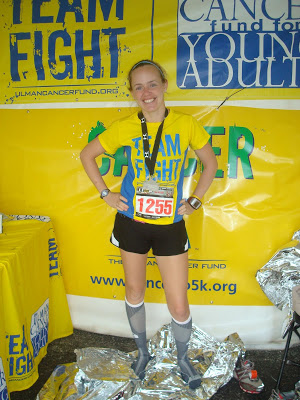 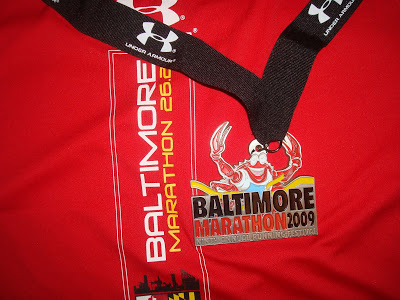 For those of you simply interested in my review of the Baltimore Marathon itself, here you go: I would recommend it. Hilly, and not always the most scenic route (i.e. we ran through numerous neighborhoods with broken and/or boarded up windows) but the spectators and crowd support were AWESOME. Way better than the VA Beach Rock and Roll half last month. Under Armour tech tees (ladies fit for the ladies, which I really appreciate!) and great medals. Plenty of water stops, Power Gels, bananas, oranges, potato chips, and gummy bears, all on the course. I would certainly do it again (if I was ready for the hills!)

Now for the “Heather’s race” review. As you have probably gathered by now, this race did not go as planned. I’m still trying to figure out exactly what went wrong, and still trying to deal with my disappointment.

I had a great morning pre race. I woke up, ate a normal pre race breakfast, and walked to the start (about 20 minutes) with Holly. I was well hydrated, and ready to go. I never felt nervous for a second, I was just excited to tackle this distance once again. I felt 95% trained and ready to go. I seeded myself in the middle of the 4:00:00-5:00:00 group, hoping to beat my PR of a 4:37:00. When the gun went off…off I went, with a big smile on my face.
Mile 1-3. UP HILL. Remember those Baltimore hills I was worried about? Yeah they weren’t a myth. (Keep in mind I live in F-L-A-T South Carolina, the only hills we have are tiny sand dunes) I swear mile 3 was and entire mile straight up hill. I had t

o stop and walk partway up the last hill. Walking, at mile 3 of a marathon. I was beginning to wonder what I had gotten myself into.

Somewhere around mile 3.5 I fell right into the 4:15 pace group pack. There were 4 pacers and about 15 followers. I stuck behind them for a little bit, and was instantly amused with the pace leaders themselves (one carried a horn he trumpeted at each mile marker) and felt completely relaxed at that speed (around 9:10-9:30/mile-ish). I decided I would stick around.

I ran mile 3.5 -15.5 with the pace group. I felt fantastic, and most importantly, I had a BLAST! I recalled some of the most AMAZING advice I had been given, just the day before (on this blog!) from my running mama friend Anne: “If you’re not having fun, slow down!” . I was having fun. I met some great people, had some awesome conversations, and joined in on the group rendition of “Jingle Bell Rock” (one of the pace leaders picked up some bells along the way). I forgot I was even wearing the darn Garmin, and before I knew it, I had run 12 miles straight without stopping once. I even learned to perfect the art of filling my amphipod, adding nuun tablets, and taking a GU while on the run. I really never thought that was possible.

I passed Holly, who was on the sidelines, at the halfway mark. She told me I was looking fantastic, and I told her I FELT fantastic. I was having such an amazing race. 2:08:11 half marathon time. Certainly not my fastest, but considering I was only halfway done, I was pacing myself well. Or should I say, the pace leaders were pacing me well! 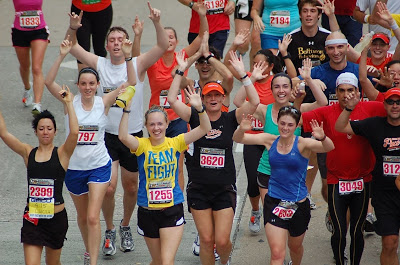 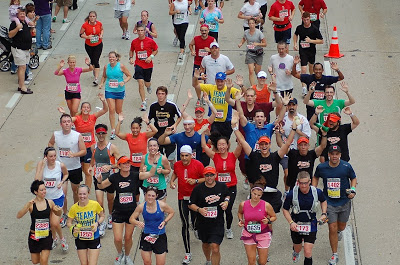 And then it happened. Somewhere around or right before mile 15, my stomach turned. I had just taken my 3rd GU, on schedule. I was drinking my nuun, just as I had done on all my training runs. But there was that tell tale stomach turn. I tried to run through it. I lasted about a half a mile before I literally felt as though if I went any further, I would quite possibly poop all over my pace team.
Disgusting, I know.

I walked to the next porta-potty and proceeded lose it (the contents of my stomach that is). Felt a bit better, came out, and tried to run again. Suddenly I had the most insane feeling of pressure in my abdominal cavity. Like if someone stuck me with a pin, I would pop. I walked that off, only to have the turning stomach come back. To spare you a long miserable story about my digestive and excretory systems, I pretty much walked the last ten miles of the race, and visited somewhere around 5 separate porta-potties.

Ten miles. Seems like nothing when you are running. When you are walking, in the drizzling rain, with insane stomach cramps, completely disappointed, ten miles feels like an eternity. Oh, and did I mention, I started going back up hill again? Good stuff.
I was terrified to take in more GU, or nuun for that matter. So I didn’t . Probably another mistake.
Somewhere around mile 20 I lost it, emotionally. Every crazy thing that could have crossed my mind probably did at that point. I had this amazingly overwhelming need to just hug my babies, right then. Impossible, considering I was at mile 20 of a marathon, hundreds of miles away from home.
I didn’t want anyone to look at me, I didn’t want anyone to cheer for me. I just wanted to walk as fast as my little legs would take me and get there already. I didn’t want any finish line “glory”, i didn’t want my medal, I didn’t want the bananas and pretzels. I just wanted this race behind me.
When I had a downhill, I tried my best to run. I usually made it about 30 seconds before I had to stop because of the stomach pain, but I kept going. Through all of this, I never thought of quitting. OK, that’s a lie, I thought about it all the time, but I knew I’d never actually do it.
The last mile into Camden Yards was mostly downhill. I ran/shuffled as much as I could.

I don’t really remember the finish line. There were a lot of people, someone put a medal in my hand and someone else put a space blanket around me, and a third person put a bottle of water into my other hand. I didn’t stop for any food, I just headed in the direction of the Team Fight tent. I was a mess. Before I knew it, I heard Holly calling my name. I headed in her direction and fell into her arms, a just cried. She sat me down on a chair in the tent, and some guy helped her wrap probably 5 space blankets around me. I have no idea who that man was, but he must have asked me 10 times if I was ok. I know he didn’t believe me every time I said “I’m fine”. I don’t think I would have believed me either. 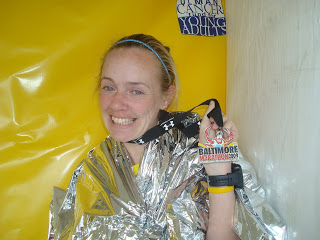 The entire day and all of the emotions I felt came pouring out. I was doing so well, I was well on my way to a P.R. I didn’t start out too fast. I was right on with my nutrition (but apparently I wasn’t). I had trained, I had found my happy pace.
But it didn’t matter. It just wasn’t my day. Then, the guilt I had been feeling all weekend about leaving my kids AGAIN for another race came pouring out, and I cried even more. Eventually, I had stopped crying long enough to take my medal out of it’s plastic bag , and put on an incredibly fake smile for a picture.
Holly then helped me put on my Sugoi Race + Recovery Socks, we helped clean up the Team Fight tent (everyone else was long gone), and we left.
So here I am now, not quite sure what to think about all of this. Yes, I know it happens, whatever. I just felt so ready for this race, and this was the LAST thing I expected to happen. This was going to be MY race, my turn for a good marathon. It wasn’t going to be a BQ, but it was still going to be good. And it wasn’t. So I’m disappointed.
I’m looking forward to the Beach 2 Battleship relay in 4 weeks, as a redemption race. But at the same time, I’m terrified to do this again. Maybe I really do have too much on my plate. Maybe I’m just not meant to be a “marathoner”. I don’t know.
I’m sure you will hear me ramble on and on about this for the next week or so, but for now, that’s all I’ve got.
OH, but I did want to mention, I ADORE my recovery socks. My calves and feet feel fantastic, usually they are the worst post racer. Funny thing is, my quads and butt are on fire (the compression socks only go up to my knee), so it appears I need to save up my $$ and find myself a pair of compression tights!!