A common theme I’ve noticed down here in the South in the summer is runners regretting signing up for fall races.   I can’t necessarily say that I blame them.  At some point during the cooler winter months, you sign up for a September or October race.  At the time you are aware, on some level, that training for this race will require you to put in your highest volume weeks and longest run during the peak of the summer.  But as you are sitting there in front of ultrasignup.com (or whatever road runners are using these days), cozied up in a hooded sweatshirt and wool socks, the idea of sweating in the sun for 3+ hours on a long run seems novel, and potentially not so bad. 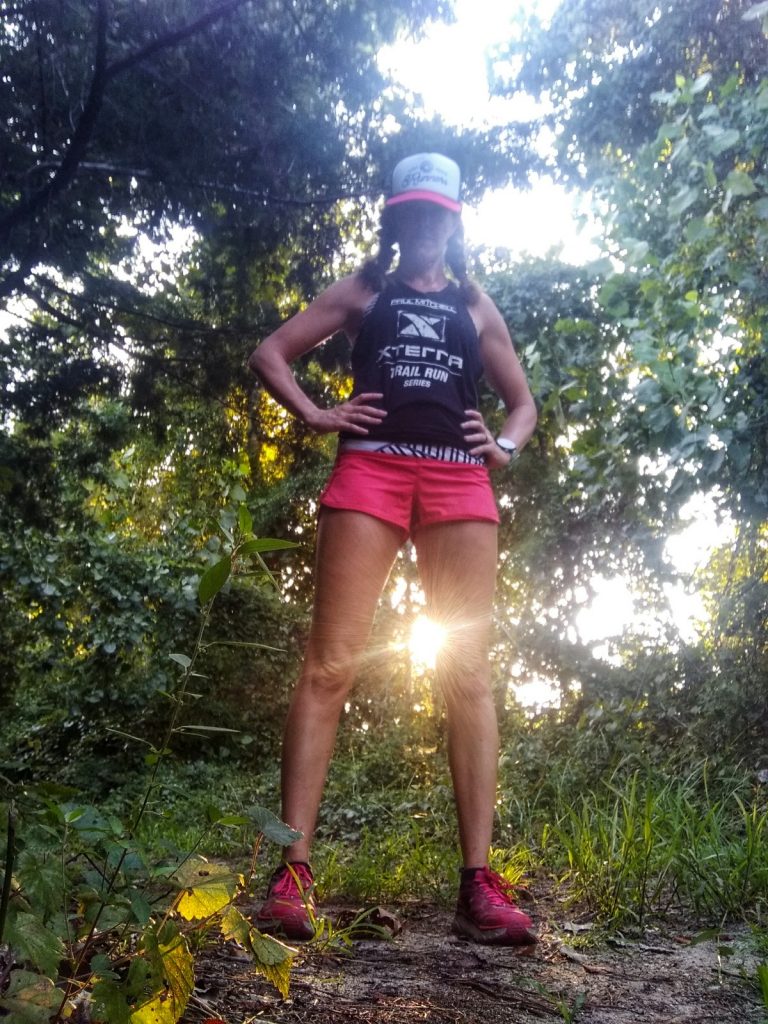 Summer running…where you stop to catch your breath under the guise of posing for a photo.

Then actual summer hits, you remember how oppressive and suffocating a dew point of 80 feels.   You’re convinced the 9:00 am 90 degree sun is literally melting the skin off your body.  And despite all of the best intentions in the world, you find your training runs not always going as planned…not because of a lack of discipline or willpower, but because no one likes heatstroke.

Yes, my friends, training for fall races here in the South, in one word, SUCKS.  But we make the best of it, just like I’m sure our friends up North in the frozen tundra do all winter.  Because you can’t sit around waiting for perfect conditions to train for your goals.  Plus, doing something is always better than doing nothing: you have to keep moving forward, no matter how small those steps may be. 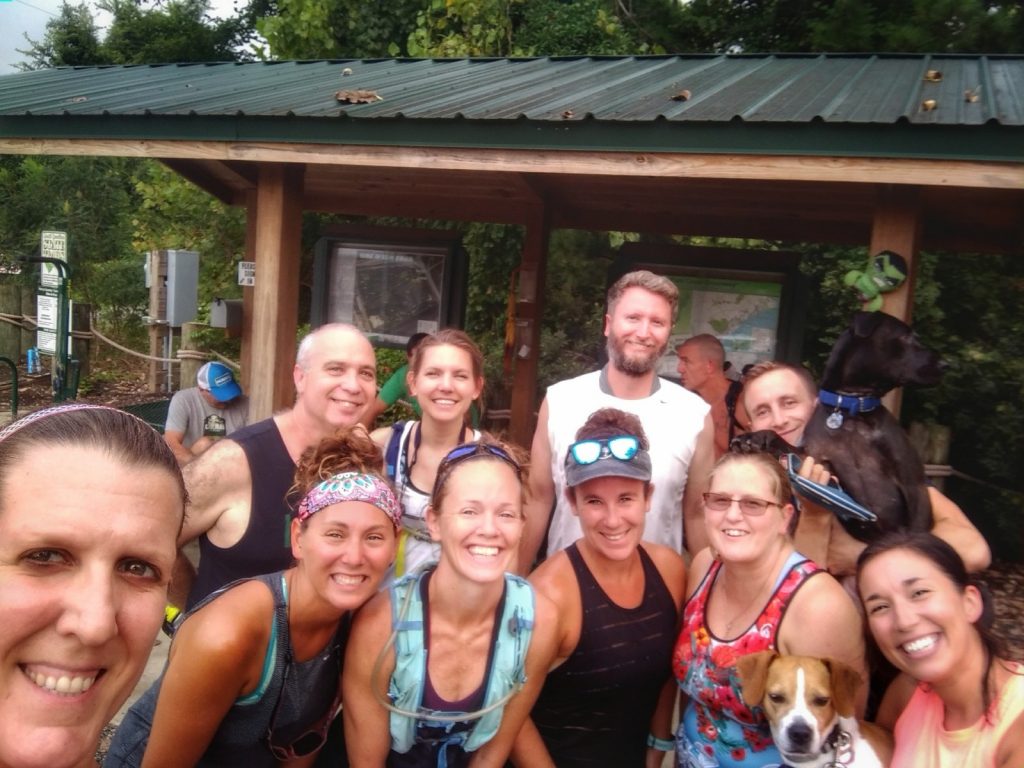 And so goes summer training.  To be honest, I don’t really mind the heat and humidity.  Two summers ago, Geoff and I trained our tails off for the 2016 TransRockies Run 6 day stage race in the brutal mid day heat, partially because we were told it would help us prepare mentally for the altitude, partially because that’s simply what our day to day schedule allowed.  Since then, I’ve found that I don’t necessarily hate the heat, though my body doesn’t always respond to it the way I hope it would.

I haven’t mentioned Barkley Fall Classic training in a few weeks, but not for lack of training.  More due to “life” and a lack of finding the time to sit down and chronicle every workout I’ve been doing.  The important thing to note, is that I’ve been doing them. 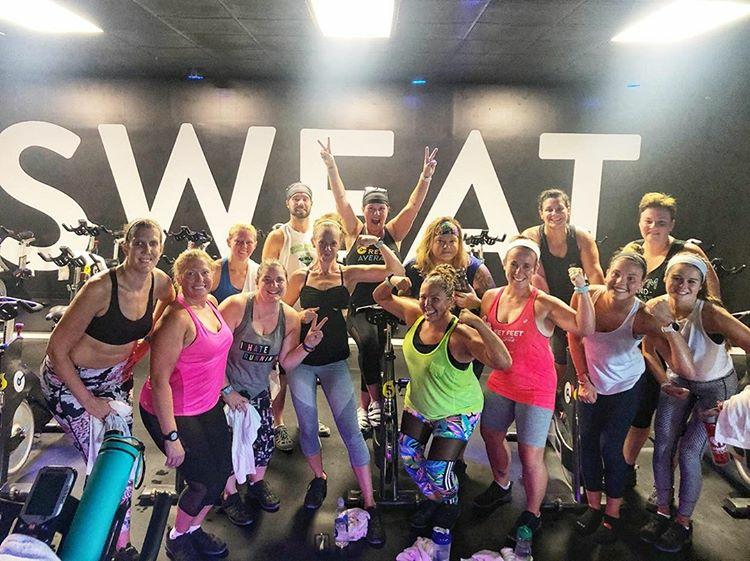 Hot spin. Did you know this was a thing? Neither did I…until I sweat my ass off in a class. Note the pattern on my pants: that’s from sweat. Gross and awesome.

Though, as previously mentioned, summer weather is certainly not helping.  I’ve been completing my long runs by trying like hell to stay in my aerobic zones (Z1 & Z2) in order to try and prevent the onset of heat exhaustion.  It works, but the result is a turtle slow pace, and not hitting as high of mileage as I would like.

Which is ironic, because I don’t actually know how long this race is.   The website says 50K (31 miles) but word on the street is it might be closer to 40 miles.    What we do know (maybe?) is this:

– The course map is not revealed until the night before the race, and the course changes yearly.

– GPS watches are explicitly NOT allowed.  So any mileage, check points, aid stations, cutoffs, are guesses, rumors, underestimations or exaggerated bravado at best.

– You absolutely cannot use the aforementioned information to help determine a minimum pace to make cutoff, because I’ve read some of the climbs will slow you down to a 45:00/mile pace.  Yes, you read that right.  FORTY FIVE MINUTES PER MILE…and that came from a race report of someone who finished top 10 overall.

– Speaking of finishing, average finisher rate is around 30% of those who started. 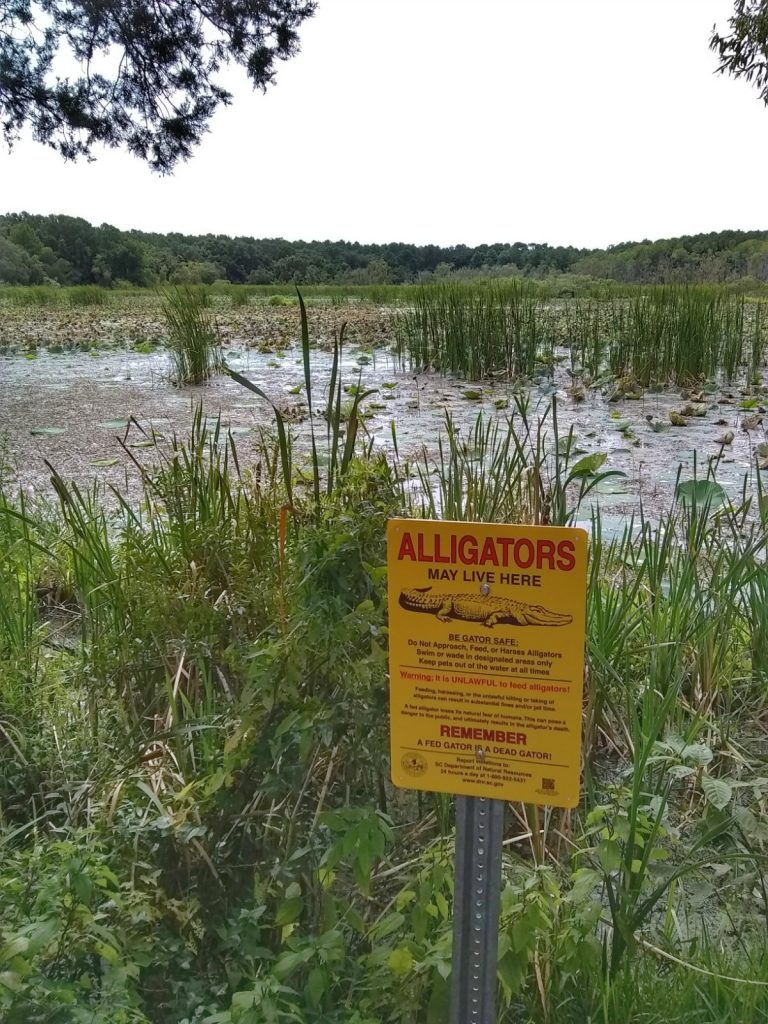 At least there’s no alligators. (Just rattlesnakes. And angry wasps…)

If nothing else, I know this race is going to be potentially the hardest physical challenge of my life thus far.  Harder than completing 100 miles with my intestines hanging out.  Harder than that time I cried while climbing hands and feet up a mountain at 11,000 feet on day #4 of the TransRockies Run .  Harder than 7 Sisters, the wildly unassuming race in Massachusetts, that barely peaks at what would technically be considered a “mountain”, yet will absolutely destroy your legs none the less.

“Everything here is physically possible, but the course is designed to prey up on our weaknesses”.

Though not scared in the way one would expect.  I’m not afraid of the physical pain.  I know it’s going to hurt.   I’m more afraid of my emotional reaction to the difficulty.  Something I’ve realized over the last few years is that it’s not my physical ability that fails me during races, it’s my ability to push through the extreme mental lows.  Hell, I recently quit a 100 mile race at mile 90, while I was in second place, because I “didn’t want to do it anymore”.   I love pushing my body to extremes.  I love pushing through physical pain.  But for whatever reason, over the last year, I’ve been virtually unable to get out of the deep, dark, emotional hole that athletes tend to fall in during extreme endurance events.  The best of them can always dig, claw, and climb out of that hole.

It’s always been easier for me to just quit. 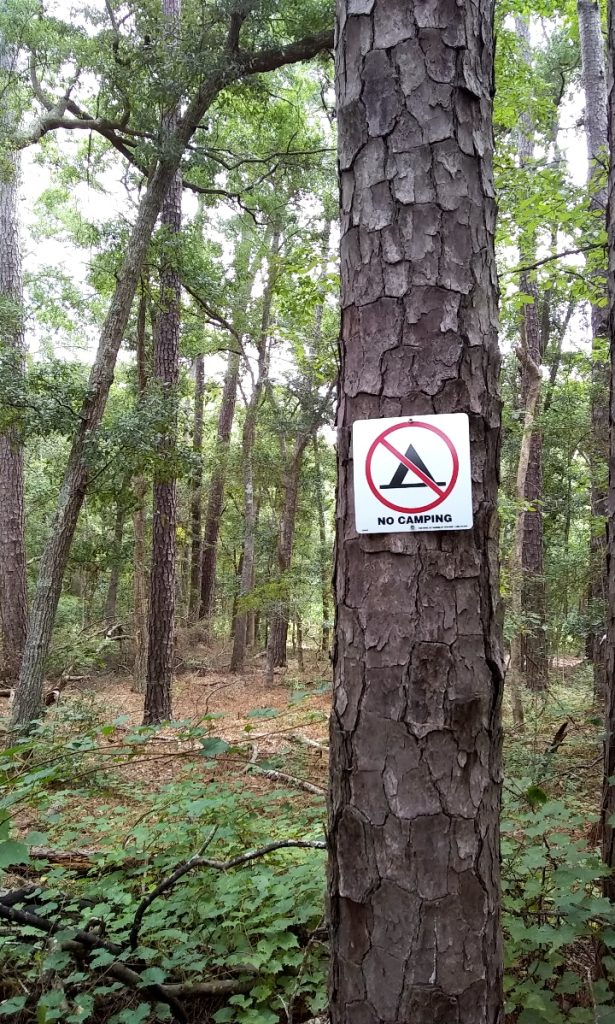 But I don’t want to be that person anymore.  I don’t want to quit when things get hard…especially in this, one of my biggest “bucket list” races of all time, one that I fought tooth and nail (and three internet capable devices) to get into.

Throughout my running career, my modus operandi has always been to confidently bite off more than I can chew.  I have signed up for races I had no business being a part of, and boldly toed the starting line, head held high.   For whatever reason, the Barkley Fall Classic has me shaking in my Hoka Challenger ATR’s.   I fear my sea-level, zero elevation to train on status will be a painful disadvantage.  I fear that all of my training was not enough. I fear I’m going to have a random allergic reaction to the aggressive wasps, like a Facebook friend of mine did last year.  I fear I’m going to get into that dark place when the going gets extra hard, and I’m not going to be able to claw my way out. 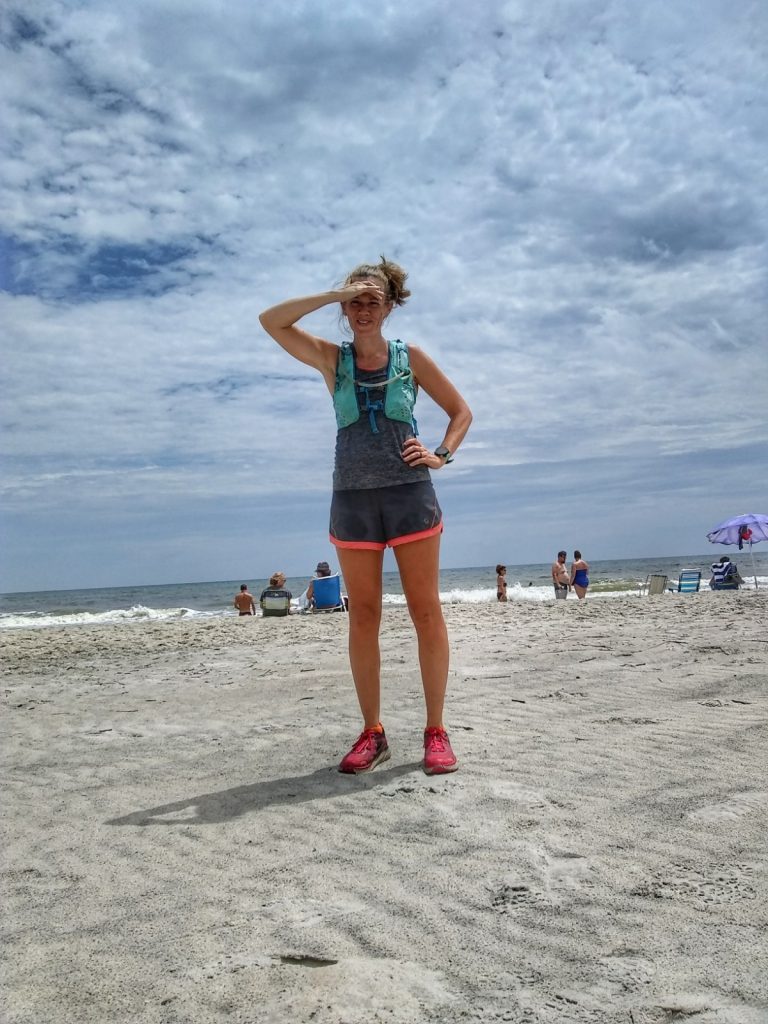 Looking a hot mess post 10 mile mid day, 90 degree run. Bonus: it ended on the beach. So I got in the ocean.

Fortunately, I’m having this freak out with twenty eight days to spare.  I’m hoping to get it out of my system, and get my game face on as soon as possible.  The plan for the following week includes: