My views on religion are very complicated.  My thoughts on the ways of the “universe” often muddled.   But there are a handful of things, beliefs, and occurrences that I wholeheartedly believe to be true.  One of them is the idea that every single being that enters your life, no matter how briefly, shows up with a specific purpose.

Seamus showed up on a Tuesday night at my front door, in the hands of my huge-hearted husband who was sporting an apologetic face as he said “can you take this for a few hours until I figure out what to do with it?”  It was a rabbit, in a cage.  A rabbit.  When Geoff started this job, I knew there was always the possibility that he would one day show up with a stray animal, but I always imagined it would be a tiny kitten or a wayward dog.  Not a rabbit.

So without question (but probably with an audible sigh), I took the cage, put it on the kitchen table, and now once again alone in the house, contemplated what the hell we were going to do next.  The rabbit was abandoned by his previous owner who decided to skip out just before she was served with an eviction notice.  Apparently, this happens often around here, but typically only extra clothes, pots and pans, and maybe a rogue area rug are left behind.  Never pets.

I stared at this animal, who seemed completely unfazed over the fact that he was now on a strange kitchen table.  Having owned a barn rabbit or two when I was younger, I always knew these creatures as the timid, jumpy (no pun intended) “fight or flight” type.  But this one seemed more casual and relaxed than the two lazy house cats that were now cautiously staring over my shoulders from the other room at the unfamiliar beast on the kitchen counter.  I cautiously opened the cage door, expecting an escape attempt by the rabbit, or even a bite.  Much to my surprise, all I received was a very welcome response to the scratch behind the ears that I gave him.

And that’s when the stupid little bastard first stole my heart. 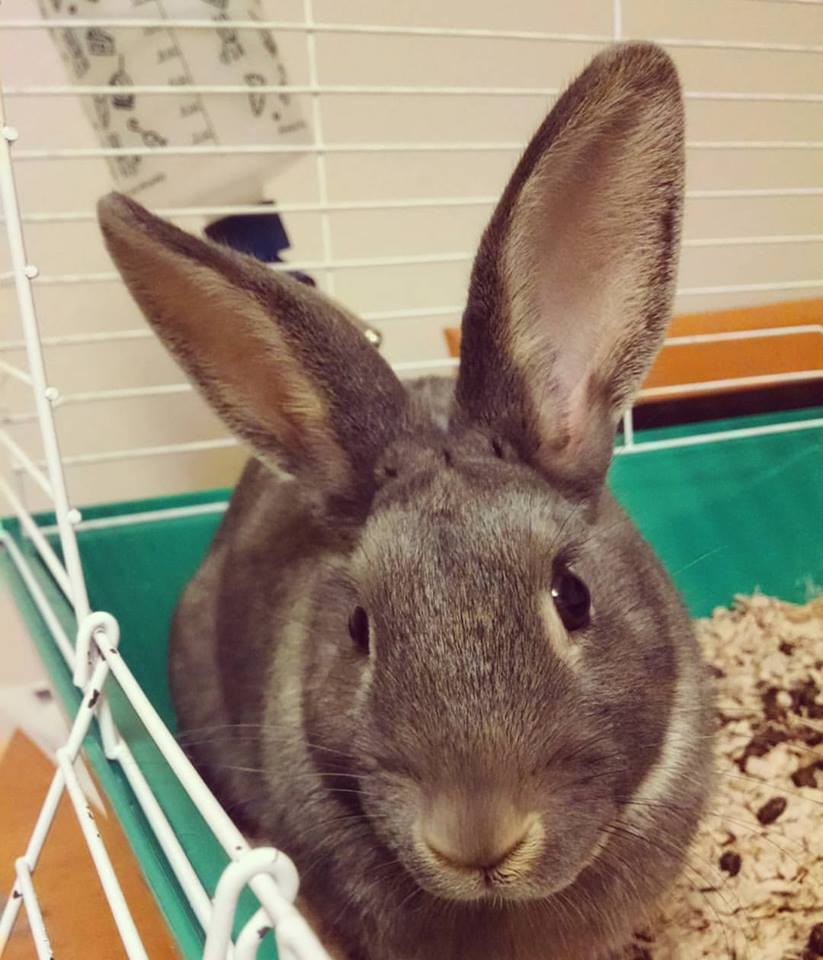 Our first encounter, on the kitchen table.

Over the next 30 minutes before Geoff came home from work, my “attempt” to find the rabbit a new home more closely resembled a social media bragging of the newest love in my life.   I sent my mom pictures. I sent my sisters pictures. I sent my trail family pictures.  I sent my neighbor, a rabbit owner herself, pictures, as well as a half hearted attempt to see if she wanted a friend for her bunny.  She did not, but instead convinced me that WE should keep the rabbit, and offered up an extra cage and supplies we could have to get us started.

So that’s when I named him.  Wee Bunny Seamus, an ode to “Wee Baby Seamus” from the TV show Archer. 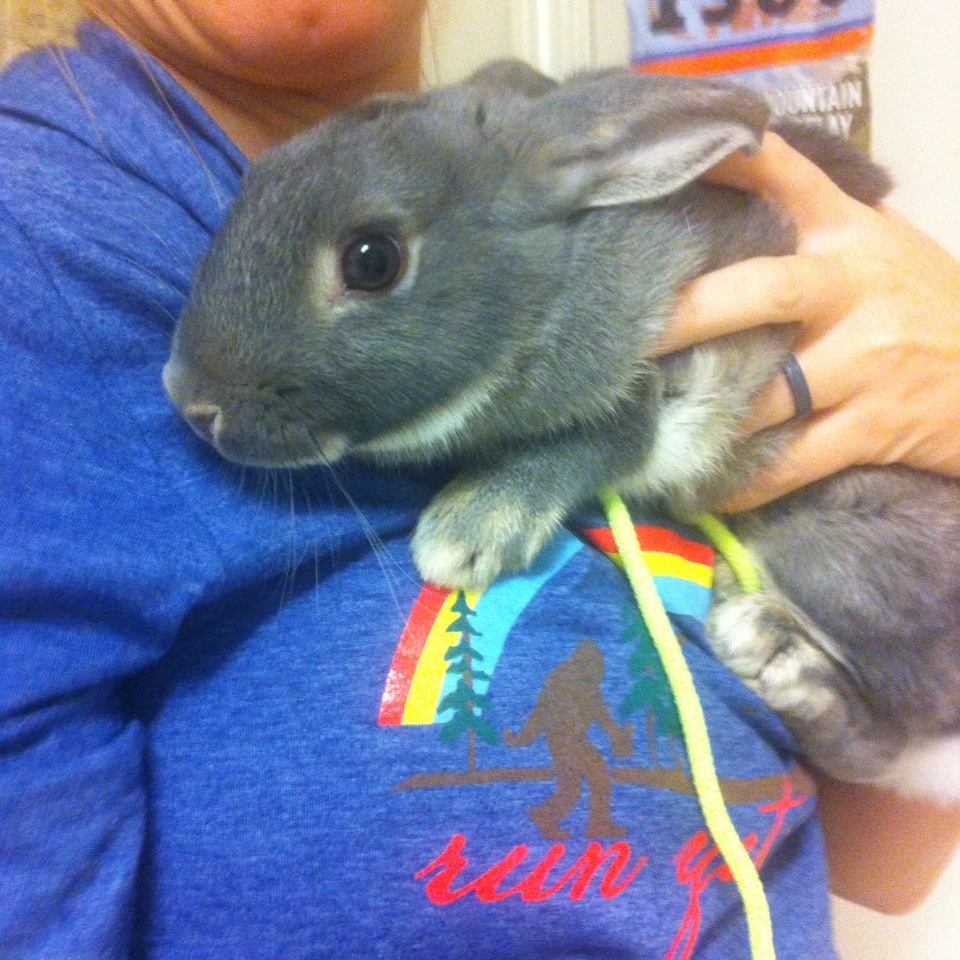 We never planned to have another pet, much less a rabbit.  Our hearts suffered a few blows over the last few years with the loss of two cats, and we had vowed to not take in any more pets, with the long term goal of being able to take the two cats we already have in the RV that we dream of living in.   Plus, I was starting a new job, away from home almost every night, and Christmas was just around the corner.  The last thing we needed in our lives was another pet, never mind such a high maintenance one.

Yes, as it turns out, owning a rabbit can be a giant pain in the ass.  Or, perhaps Wee Bunny Seamus was simply a pain in the ass rabbit.  I was constantly calling him “that jerk” as I chased him away from whatever chaos and destruction he was currently creating.  Regardless, he was ours, a part of the family, and we gave 100% to making sure he was as happy and as healthy as the rest of our family members.  Despite chewed laptop cords.  Despite the destroyed corners of the wall (we are NOT getting our deposit back on this place…)  Despite the fact that he chased the cats incessantly.  Despite the fact that he was impossible to catch when it was time for him to return to his bunny condo. Despite the time he ran across the room, tackled my 10 year old for no apparent reason, and bit him. 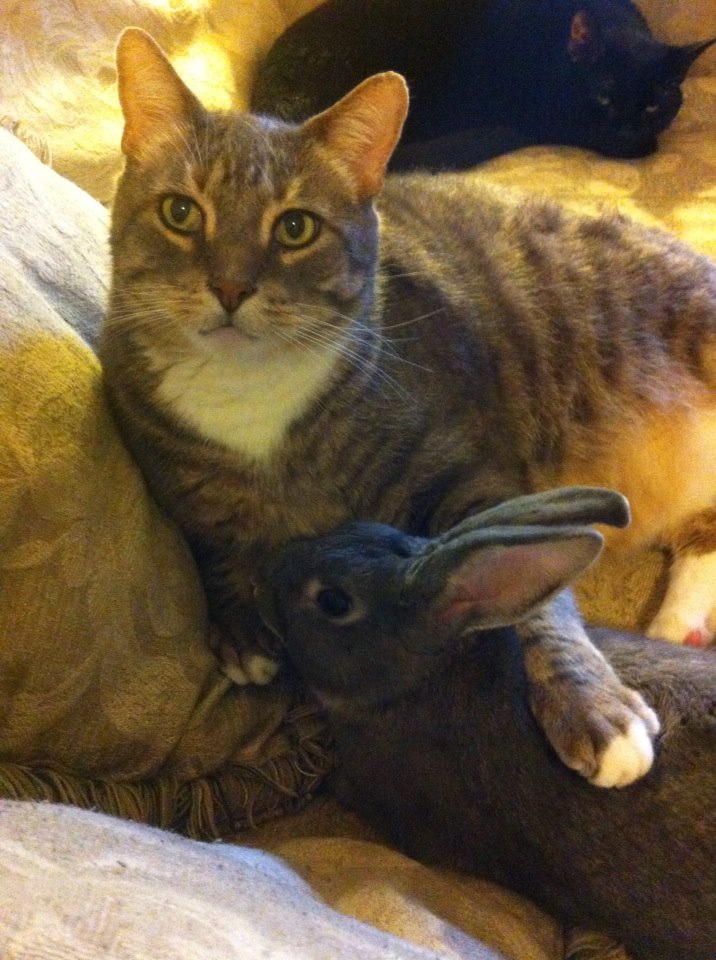 “What did I ever do to you guys to deserve this?” – Donut the Cat

But it also turns out that owning a rabbit can be incredibly rewarding.  The way he would spontaneously jump high and kick his feet in the air always made me laugh.  The way he would sprint across the room and shove his face into mine when I called him made my heart melt. His hops onto the couch were never carefully planned out, like that of a cat or a dog, but instead happened quickly and recklessly, and often ended with rabbit feet in someone’s dinner plate.  His flops on the floor where he would stretch his legs out to relax were so sporadic and unpredictable. 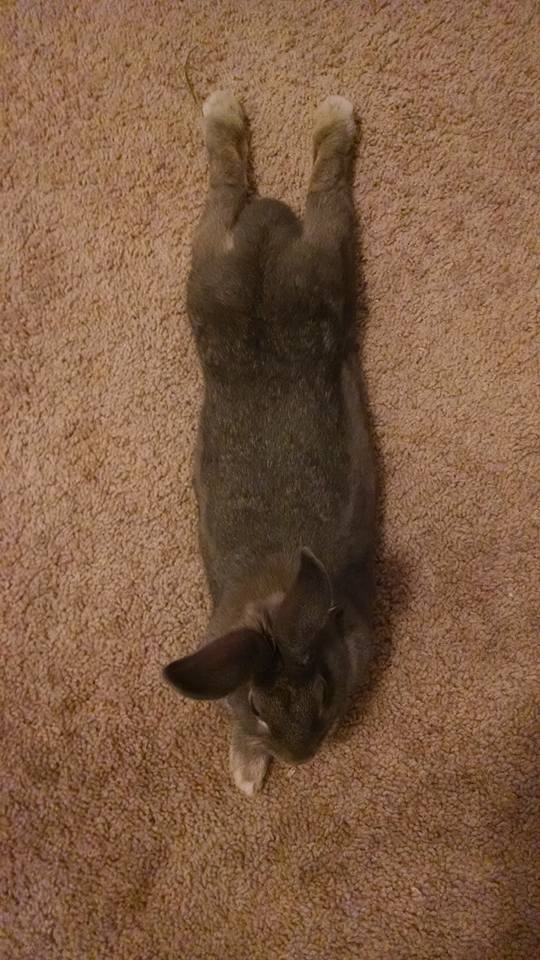 His little face was always so focused when he ate, with a mouth and whiskers that chewed faster than one would imagine possible.  Daily, Geoff and I would say to each other “I still can’t believe we have a RABBIT.”  It was more than a feeling of novelty, it was a feeling of something we finally had in our lives that we never knew we had been missing in the first place. 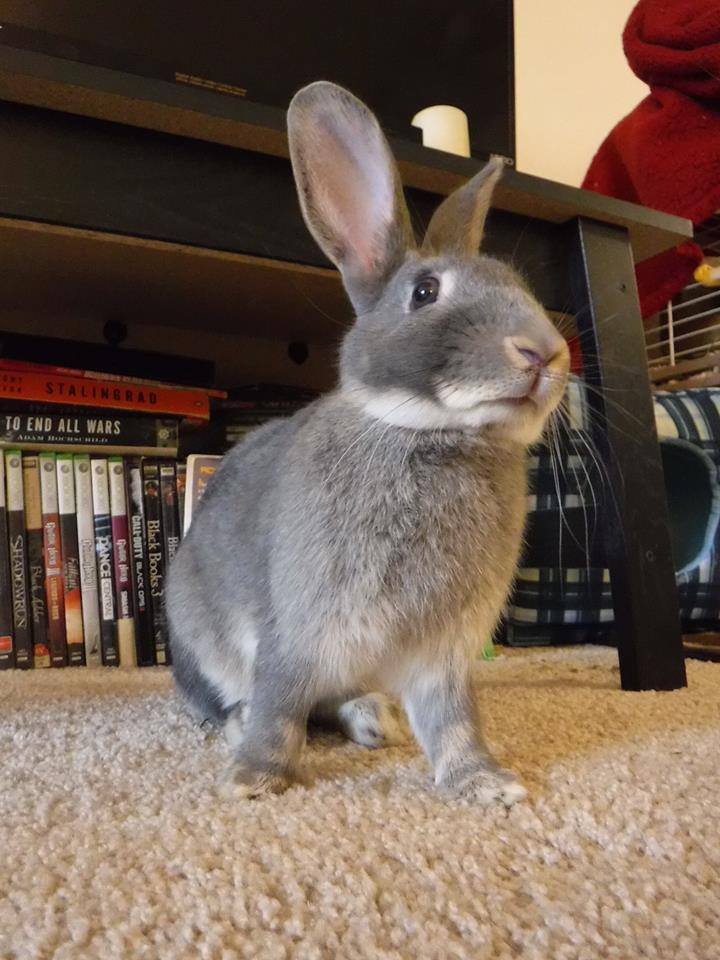 I’ve been meaning to write about this fuzzy little bunny for about 2 months now, but figured I would get around to it eventually.  In two months time, that pain in the ass rabbit carved out a huge part of our hearts…so it is no surprise that when he unexpectedly passed away this weekend, a huge part of our hearts is suddenly and blatantly missing.  I never imagined I would be forced to write about him for the first time as a means of grief, and so very painfully soon.

Two months is a devastatingly short time with a pet, and I can’t help but feel like it is completely unfair.  I also can’t believe how upset I am over this loss.  I’m usually the strong one, the rational one, the “we love our pets like family, but they are only pets” one.   Yet I find myself utterly heartbroken.  Over a RABBIT.  It feels so silly, but the pain is very sharp and real.  Kind of like that little jerk’s teeth.

And so while I grieve, I try to remember my belief that every being that enters my life, no matter how briefly, shows up with a specific purpose.   Seamus was no exception to that rule.

In two short months, Seamus taught me to be patient.  Gaining the trust of a skittish creature with razor sharp teeth and claws is not an easy task, but it is incredibly worth it.

Seamus taught me to eat more vegetables.  Kind of funny, seeing as we are already vegetarians.  But having him around meant that I made almost daily trips to the grocery store for something green. The kids and I always got a kick out of finding something new for all of us to try.   I’ve actually lost a little weight and feel much better about my diet since that rabbit showed up. Who knew.

Seamus taught be to be more mindful of my stuff and actually put things away.  Care about your GPS watch or those new sneakers? Then don’t leave them laying around, for his aforementioned razor sharp teeth will tear them to shreds in a microsecond.   I know this thrills my husband, who can’t stand my haphazard messiness.

Seamus taught me that, unbeknownst to me, I am a rabbit person.  I like cats well enough.  Dogs are alright.  But that silly little rabbit meant so much to me.  And perhaps, Seamus was showing me that there is plenty more room in my heart for another bunny in need.

But most of all, I believe Seamus showed up to remind me that showing selfless compassion and love to another soul in need, no matter how much it may hurt you in the end, is always, 100% worth it.

Wee Bunny Seamus is currently in his final resting spot, a beautiful field at our favorite trail where we often see wild bunnies running freely.    A place where I will be able to visit him often, and thank him for the love and chaos he brought into my life, even if only briefly.

Hop free, little bunny.  I hope there are endless cats to chase and cords to chew in rabbit heaven. 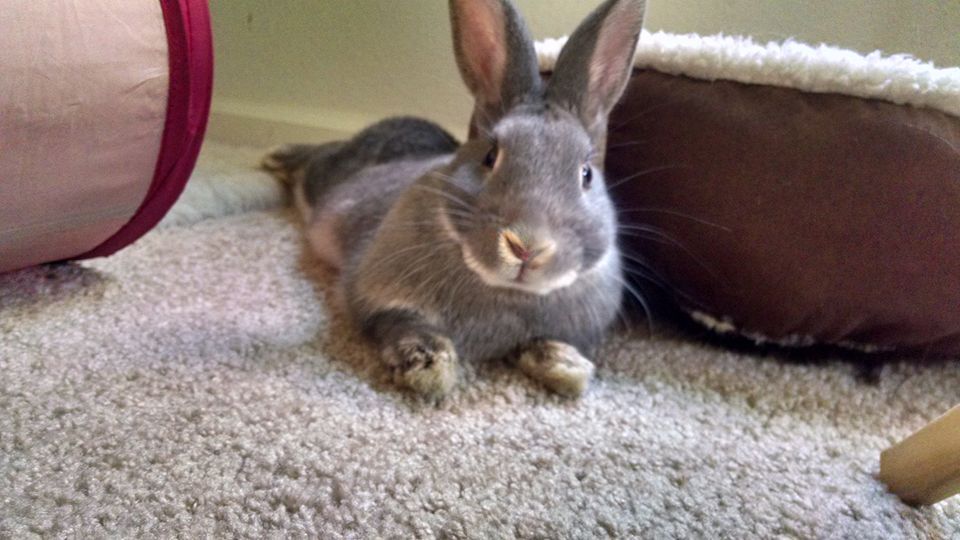