Race day ailments seem to be a (painful) rite of passage for new runners; and an unfortunate recurrence for forgetful running veterans.  There is nothing quite like finishing your first race, only to step in the shower and wince in pain as the hot water discovers all of the places your sports bra or shorts chafed your sensitive skin.  Though easily preventable, often times new runners (and sometimes even the seasoned pros) are so focused on the race itself that they overlook potential ailments that could totally ruin the race they trained so hard for.    Here are six common race day ailments experienced by runners, and tips on how you can prevent them from ruining your race.

(Disclaimer: I initially hoped to post pictures of said ailments, but decided I’d spare you guys. You are free to eat lunch and read this post simultaneously.) 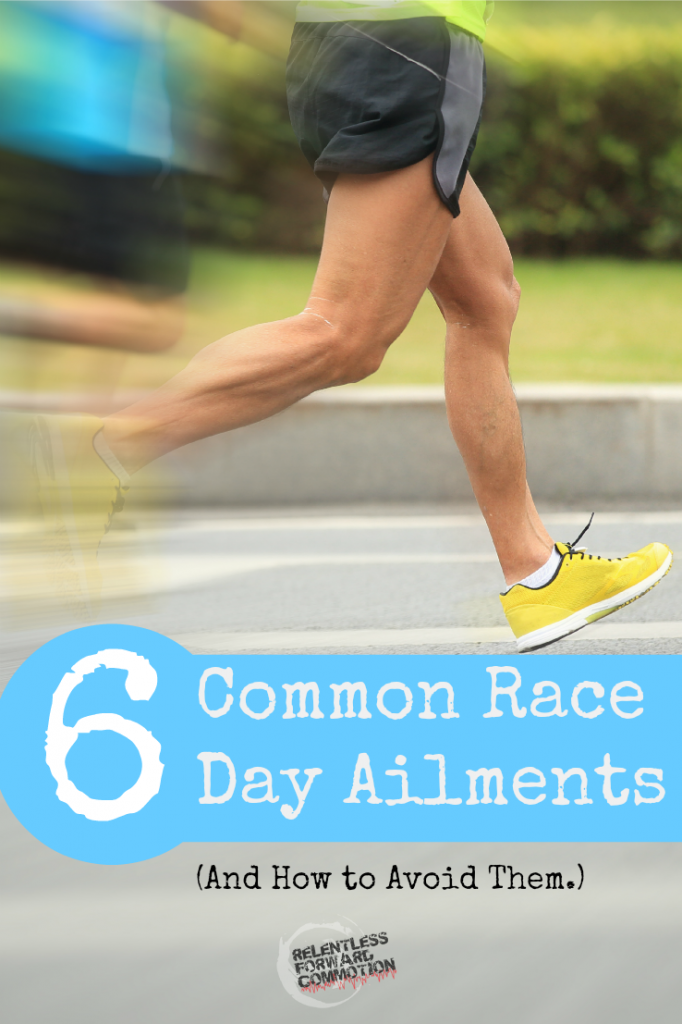 A runners nemesis: blisters on your feet can be incredibly painful, but are often preventable.  Wear the same sneakers that you have trained in; avoid wearing brand new shoes on race day, as they may have what is known as hot spots, or areas that have yet to be broken in and may cause irritation. Be sure you are wearing the appropriate socks, with proper fit and sweat wicking fabric. Lastly, help avoid chafing by covering your toes in anti chafing cream such as Trail Toes

, or sprinkling some anti-chafing powder such as Anti Monkey Butt Powder

on your feet before putting on your socks.

Trust me and the Baltimore Marathon of 2009: nothing will ruin your race like having to stop for port-a-potty breaks due to an upset stomach.  DO NOT try any new foods the night before, the morning of, or during the race.  This is not a friendly avoidance suggestion, it is a warning to NOT try new things.  Instead, stick with foods that you know your stomach can easily digest, and you have had success with during your training runs. If you are sensitive to high fiber foods, it is recommended that you avoid them the night before and morning of a race. Instead, try foods such as bananas, pasta, or plain bread and bagels, that tend to slow down your digestive system. Stay properly hydrated, and avoid alcohol consumption the night before a race.

Chafing can occur in numerous places on a runner, typically anywhere that continuous rubbing of clothing, accessories, or even skin to skin contact occurs. Common sites of chaffing include between the thighs, on the shoulders under sports bra straps, or in the armpits. To prevent chaffing, first ensure that you are wearing dry-wicking, technical fabric. Avoid cotton, as it is more likely to absorb sweat and irritate the skin. Second, generously apply an anti-chafing lubricant, such as Vaseline, or a sport specific product such as Body Glide to the areas that are most prone to chaffing.  To avoid any surprise hot spots, race in clothing that you have previously trained in and haven’t experienced any issues with.

Yes, this is actually a thing.   One that I’m happy to report I’ve yet to experience, but I hear is incredibly painful.   Because women typically wear tight fitting sports bras, this ailment typically only affects men. I’ll spare you a photo in this post, but if you are oddly intrigued, visit this flikr album.  Over the course of a race, nipples constantly rubbing against a shirt can cause irritation, and even bleeding. There are a number of ways to prevent this condition. First, avoid wearing cotton shirts, as they are more likely to chafe, and instead opt for a dri-wicking technical fabric. Apply some sort of lubricant directly to the nipple area such as BodyGlide or Vaseline. Lastly, if necessary, a Band-Aid, or a product designed specifically for this purpose such as NipStrips

, can be applied over the nipple to protect the sensitive skin.

Another gross, yet common ailment especially among longer distance runners, is the bruised or lost toenail.  To avoid such toenail injuries, be sure to wear properly fitting shoes. Often, runner’s feet swell during longer races, or toes bump against the front of shoes on courses that contain a significant amount of downhill. For these reasons, it is often recommended to size up one half of a shoe size in your running sneakers. Also, keep your toenails short to help prevent pressure on the toes from the impact of running.

During the anticipation of an upcoming race, or during the excitement of running a race, a runner may find themselves drinking too much…or too little water.  This is not only an ailment, but a situation that could quickly become dangerous to the health of a runner.  Hypernatremia (dehydration) or hyponatremia (due to low levels of sodium, or too much water) can not only ruin your race day experience, but can potentially become life threatening.  Though these situations are more common in longer distance races, they can affect any athlete at any time.  To prevent drinking too little…or too much… water, practice your race day hydration during training situations.  Account for changes in climate on race day (such as really high temperatures) but don’t go overboard.  If your hydration plan worked well during training, stick with a similar plan on race day.

While some race day ailments may simply be bothersome, others may start out small, such as a blister, and eventually become debilitating over the course of the race. Keep in mind the simple suggestions listed above to help prevent these ailments, and you’ll be able to focus simply on running your race.

What is the worst ailment/injury that you’ve experienced during a race?  In retrospect, was it preventable?