Today I ran the Fun Sun Run 5K at Huntington Beach state park in Murrells Inlet, SC.  Joining me on this adventure were my two babies, and my mother in law Jan, and sister in law Hope (Hope was also running)! We arrived nice and early, and then stood around for quite sometime! According to the director, in 2007 there were a hand full of racers….in 2008 maybe 80…..today, hundreds (final count still out). The line of traffic to get into the park was unreal, so they delayed the 5k start time by about 30 minutes.

It was a little overcast, but in the 60’s…absolutely PERFECT weather for a 5k! We finally lined up, listened to the director talk for a bit, and the gun went off signaling the start. My initial goal was to keep up with Hope. She ran a 26:-something last race, so i knew this was in theory feasible. Well, she took off without me. It’s hard not to get caught up in the excitement of the start of a race. Maybe 50 yards in I looked down at my Garmin 7:03 pace. YIKES! I was hoping to average an 8:30 so I knew i better slow waaaaay down so I don’t crash. I slowed down to what felt to be a comfortable pace. A few minutes later I looked down at the Garmin again….7:30! What? I felt like this might be bad news. I have learned the hard lesson too many times about going out too hard. But if it felt good…why stop now?

We hit the first turn around at the one mile mark.  It was somewhat motivational to see that there weren’t TOO many people ahead of me. For the second mile I followed closely behind a dad and his 8 year old sun. They were booking, and the kid was all over the road. He was complaining the whole way, but he was still running very fast (and took first in his age group in the end, I’m sure he wasn’t complaining then!) Around mile 1.5 the dad pointed out an alligator that was just off the side of the causeway! Probably only about 4or 5 feet, but a gator none the less. I made the comment of “well that’s a first, seeing a gator on a run”. The dad said to me, very matter-of-factly “well maybe you were just too tired to notice gators during other runs”. I chuckled to myself , thinking of where I do my training runs. Sorry buddy, but I don’t think there are alligators roaming my neighborhood. 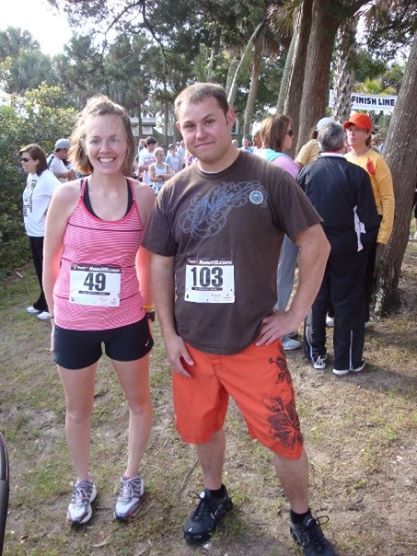 Me & Lonnie, my competition for the morning.

I think I startled him, he certainly wasn’t expecting me, haha. At mile two there was a water stop. I still maintained a pace in the 7:40 range, which is VERY fast for what I’ve been doing lately. My head started playing games with me. I didn’t need the water, but I started thinking about the appeal of wanting to stop (and having a reason to). The more I thought about it, the deeper/harder my breathing became and next thing you know, i was walking with a cup of water in my hand. DARN IT!! Lonnie passed me again, and I wish he would have yelled at me to hurry my butt up. LOL!

I’m not going to lie, I struggled the last mile. The stopping to walk hurt my momentum and really messed with my mental game. i had to walk for a few seconds a few more times. I probably didn’t *have* to , but in my head I thought I did.

The last half mile of this race was killer. A straight away. I’m talking straight as an arrow straight away, i could SEE the finish line, half a mile away. If that doesn’t mess with your psyche i don’t know what will! I put my eyes to the ground…about a foot in front of my shoes, and just ran with everything I had. It made me a little dizzy and I couldn’t help but think “I hope I don’t pass out! ” But the alternative was seeing exactly how far I had to go, and at that moment I couldn’t deal with it.

Before I knew it, I heard cheering on either side, and looked up to see the finish line was almost there. AND that Lonnie was literally 20 feet or so in front of me. If I had anything left, anything at all, I would have sprinted to pass him right before the finish line, thus evoking gloating rights until the next race (haha, sorry Lonnie). But he beat me, fair and square. (until next time…) 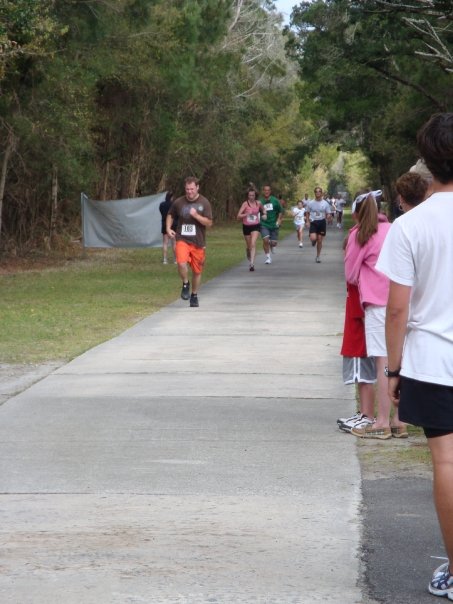 I obviously did end up going out too fast. My legs felt great, I felt that THEY could go even faster, but my lungs were screaming at the end. I guess that will come with training, and a lot of speed work 🙂 But, I made an almost 5 minute improvement from my last race 4 weeks ago. 5 minutes is huge! Training has been paying off, and I’m looking forward to getting more and more miles in each week. Tomorrow’s long run is 6 miles, and I’m hoping to have a nice, easy, steady pace.