While running aimlessly through the woods, sticky watermelon juice running down my chin and on to my shirt,  I found myself wishing someone would carry me.  Since no one was around, and chances are they wouldn’t carry me even if they were, I instead contemplated laying down right there in the middle of the trail to take a nap.  It was at that moment the thought occurred to me: 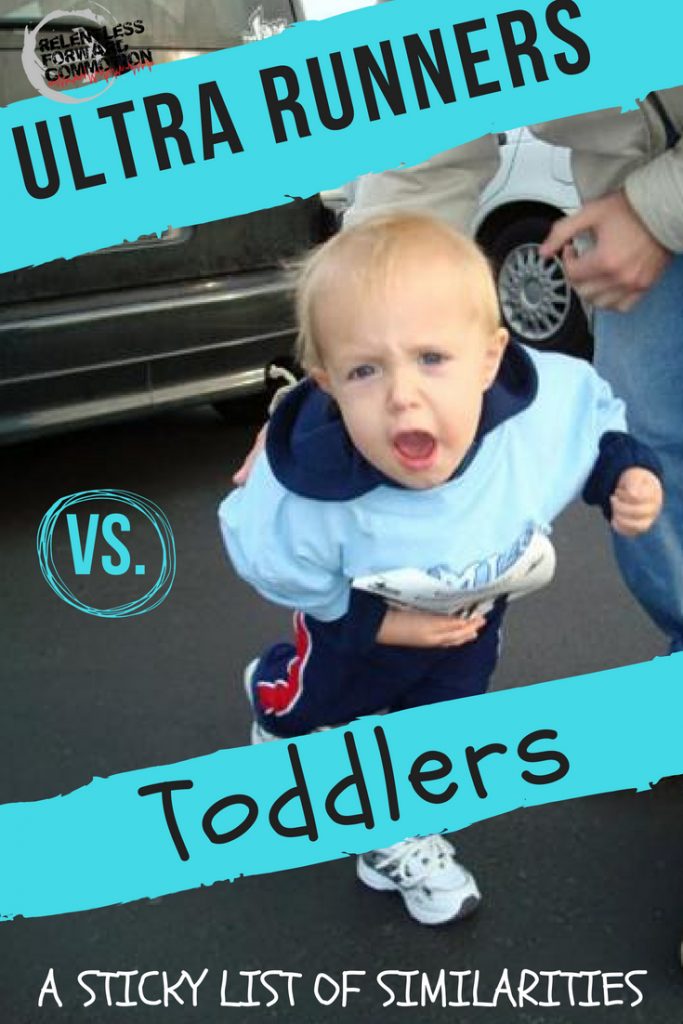 No toddlers were harmed in the making of this Pinterest friendly graphic.

Ask any parent who is currently in the throes of toddlerhood, and they will confirm: toddlers are hilariously unpredictable, messy, and stubborn as hell.  Raising toddlers is a circus act of trying to stay one step ahead of unpredictable chaos, and praying that everyone makes it to kindergarten mostly unscathed.

Ask any runner or crew member who has survived the throes of an ultramarathon, and they will confirm: ultra runners are hilariously unpredictable, messy, and stubborn as hell.   Crewing for an ultra runner is  a circus act of trying to stay one step ahead of unpredictable chaos, and praying that everyone makes it to the finish line mostly unscathed. 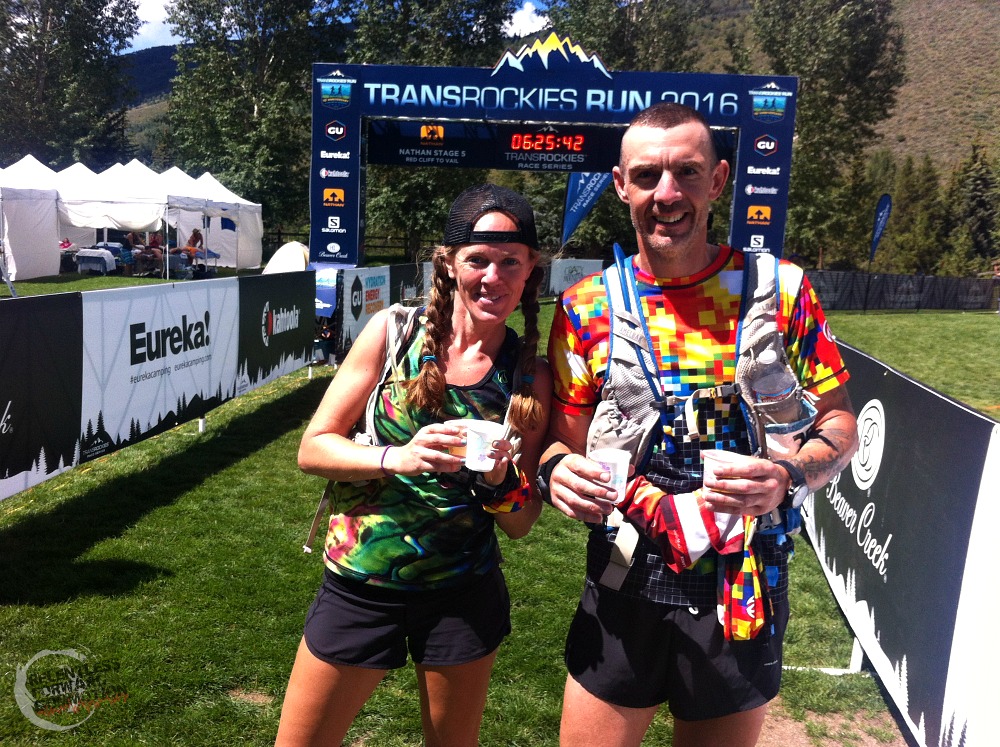 Let us count the ways ultra runners and toddlers are so similar:

Both toddlers and ultra runners understand that utensils simply slow down the process of getting food into your mouth, so don’t bother using them.  Besides, you were born with a perfectly good fork and spoon of your own: they’re called your hands. 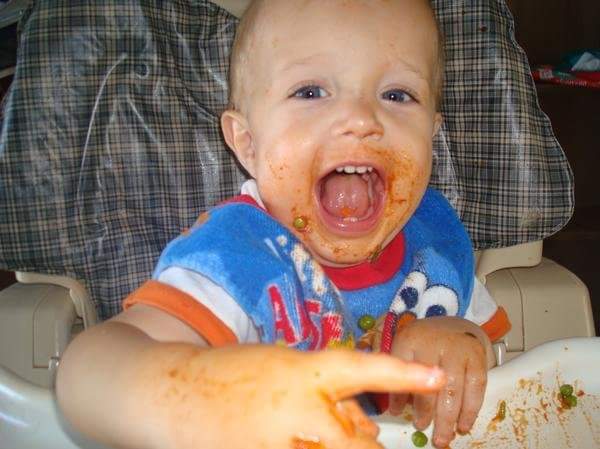 “Heeeeeey aid station volunteers! You guys got any of that Tropical Buzz Tailwind?”

Speaking of food, let’s talk about favorites among both crowds: 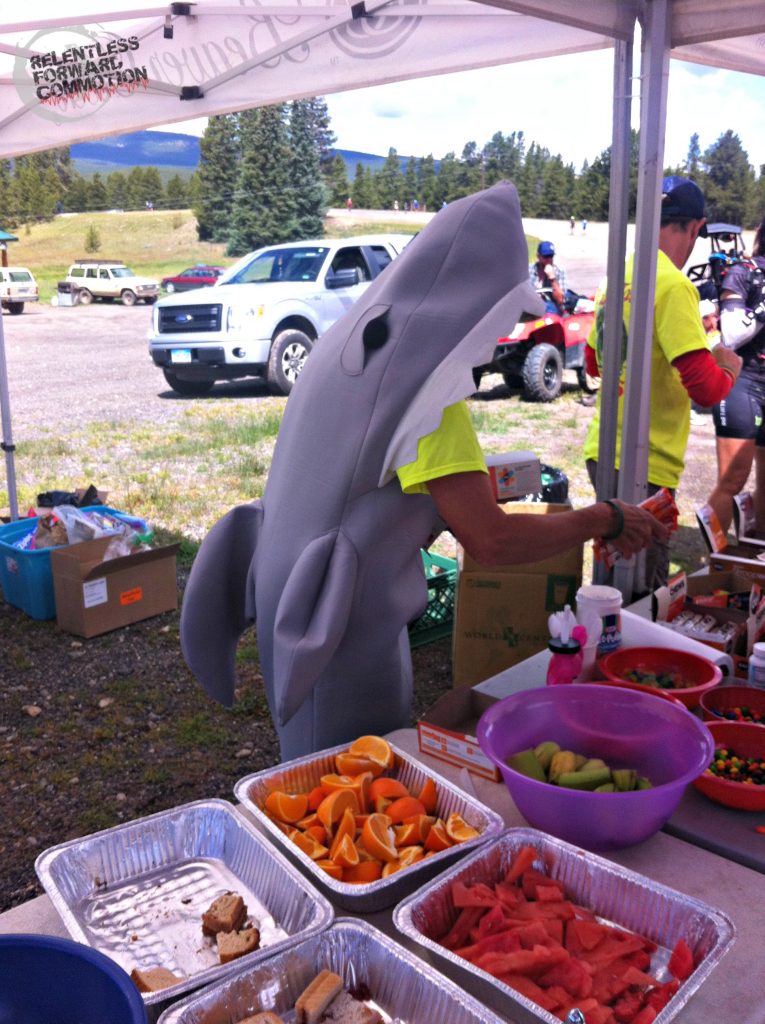 Whatever your choice of snack foods, chances are you’ll have some sort of sticky mess running down your chin and forearms.  Unfortunately, ultra runner bibs don’t clean up the mess as well as toddler bibs.  Perhaps they should start making them (the runner bibs) out of terrycloth.  Come on race directors, this is a million dollar idea…

Your crew (or your mom) might tell you that you should lay down and take a quick nap.  You’re probably going to scream “NO” and insist you are fine to keep going.  Mom (crew) knows best, of course, because you’re probably getting pretty cranky…not to mention they are tired of listening to you whine and could use some peace and quiet.  But do everything you can to resist! 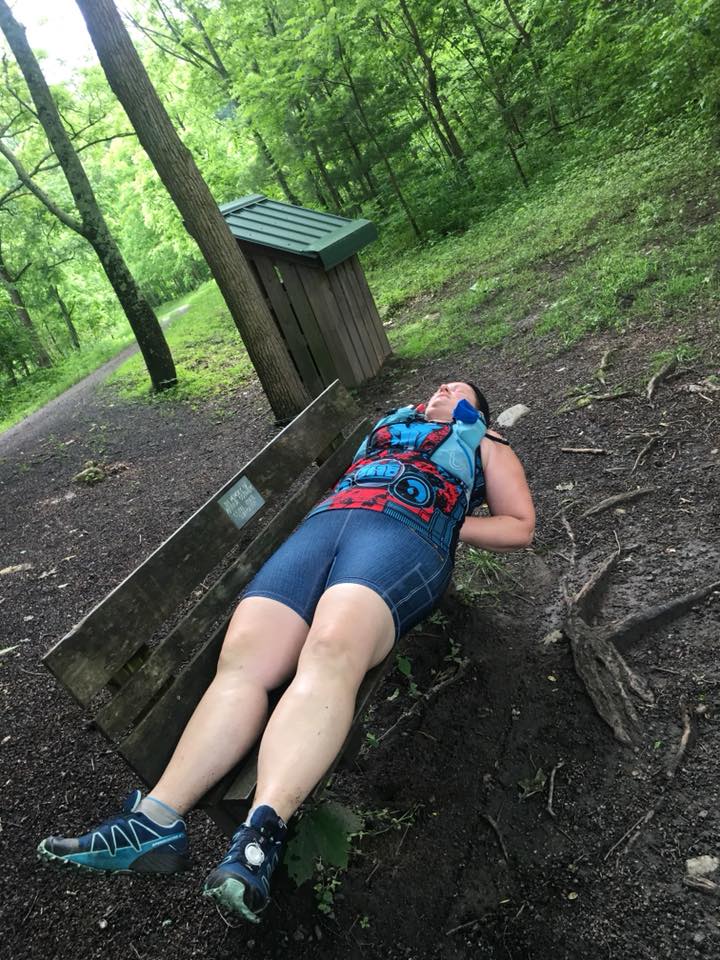 Andrea Webb just needed to “lay down for just a minute…”

And instead, take a nap when you want to, wherever you are, no matter what else you’re doing.  Don’t announce it either, just doze off with that hilarious “I’m falling asleep/no I’m not/yes I am” head nod, preferably with food in your hands.   In a chair, mid sandwich bite.  On picnic table while trying to drink your Tailwind.  On the ground, under any tree.  Don’t forget to whine when your pacer grabs your hand, refuses to carry you, and says “come on, you need to walk like a big girl!” 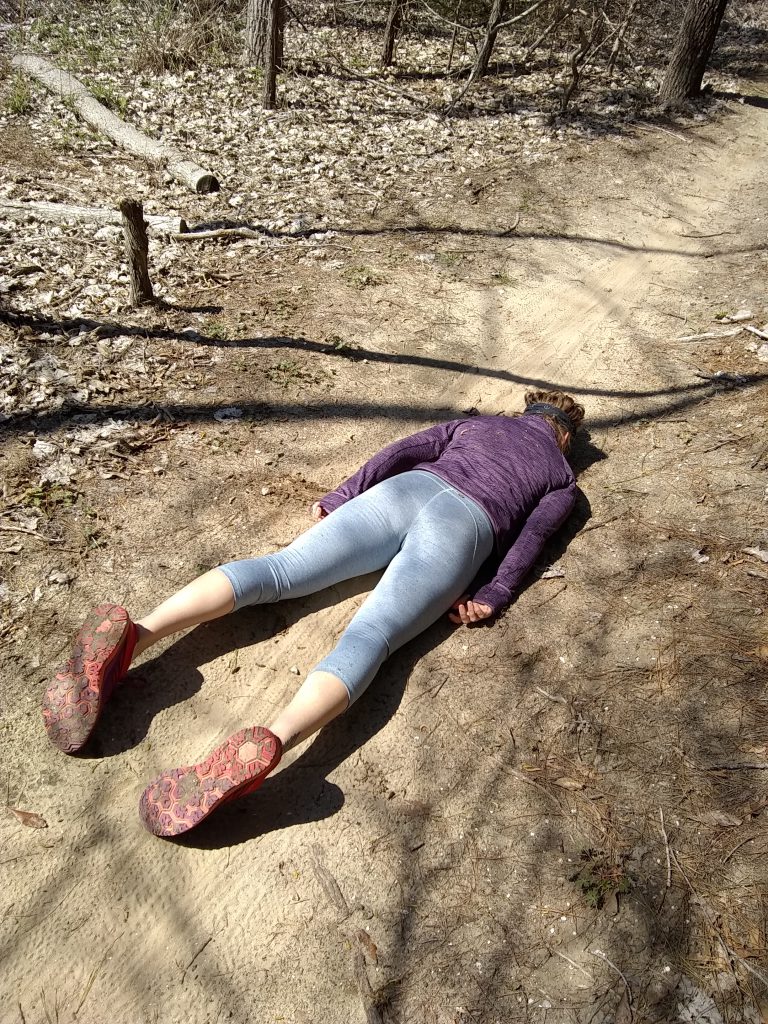 Let’s clarify this one: crying over things that make no sense.  Like the fact that you’ve been craving pink Starburst for the last 12 miles and the aid station only has red, orange, and yellow Starburst, so clearly everyone else hates you.  Or maybe you accidentally misjudged the depth of a puddle and got your left big toe wet, and now your life is ruined.  Or the tag on the back of your shorts feels funny, and you just don’t want to wear them anymore, but no one wants to agree to let you run around pantless. 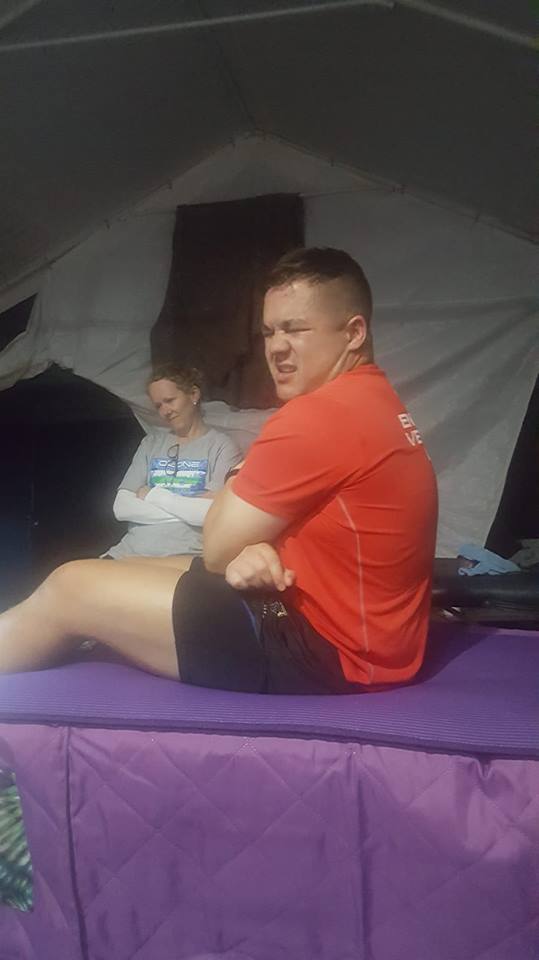 “I’m not pouting, YOUR pouting!” (Eric Brumbalow , 2018 Ozone 48 hour…and to give him credit, he was actually getting a blister worked on in this photo. But it looks like a pout. )

Just like a toddler, ultra runners will come through transition (the playroom) and it will appear a small tornado has hit.  “Where did you leave your shoes?  How is one trekking pole over here and the other 25 yards away? Whose sock is this?” As a crew member, it will be your job to try to make some sort of organization out of the chaos, only for your runner to show up later (or at the next checkpoint) and tear everything apart all over again.

The further along you are into an ultra, tying your own shoes becomes probably one of the most difficult tasks on earth. So just like a toddler you eventually let someone else do it, for fear that you’ll get stuck in this position forever: 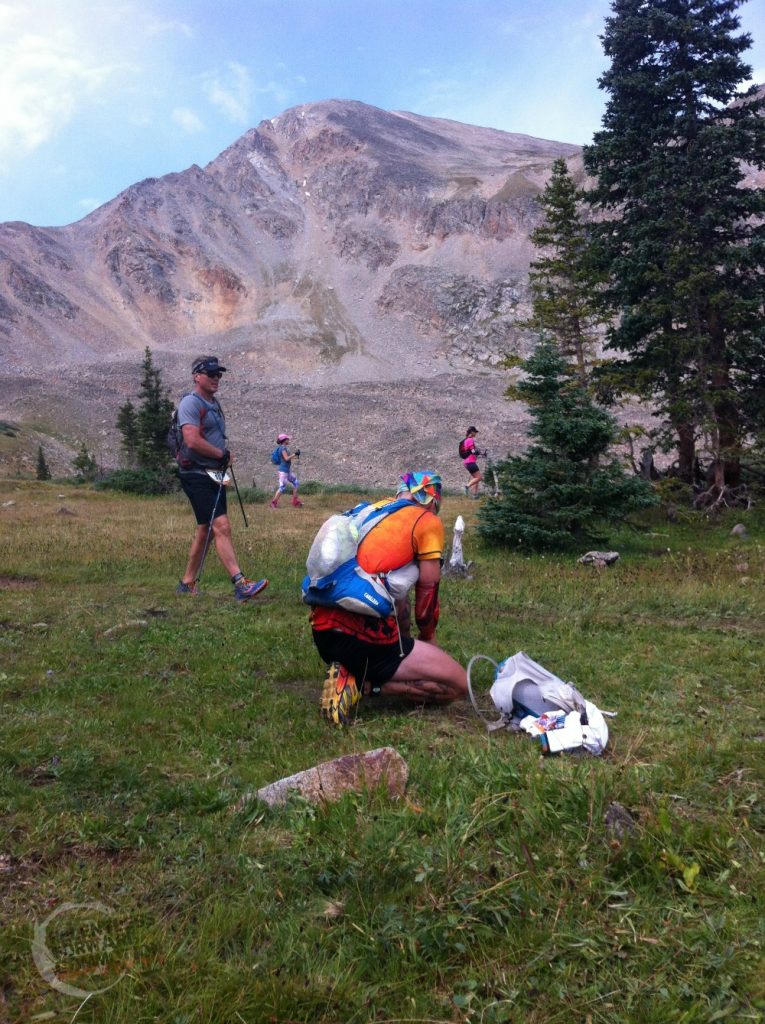 Hey, when you’ve gotta go, you’ve gotta go, don’t be shy about it.  Toddlers don’t need privacy when it comes to using the bathroom, and neither do you.  In fact, in addition to not so subtly pooping just behind a bush, you might want to update your crew and let them know that you’ve done so.  Hell, they might even track it on a chart…peeing during a race is absolutely cause for celebration (versus not peeing at all).  GOLD STARS ON THE POTTY CHART FOR EVERYONE! 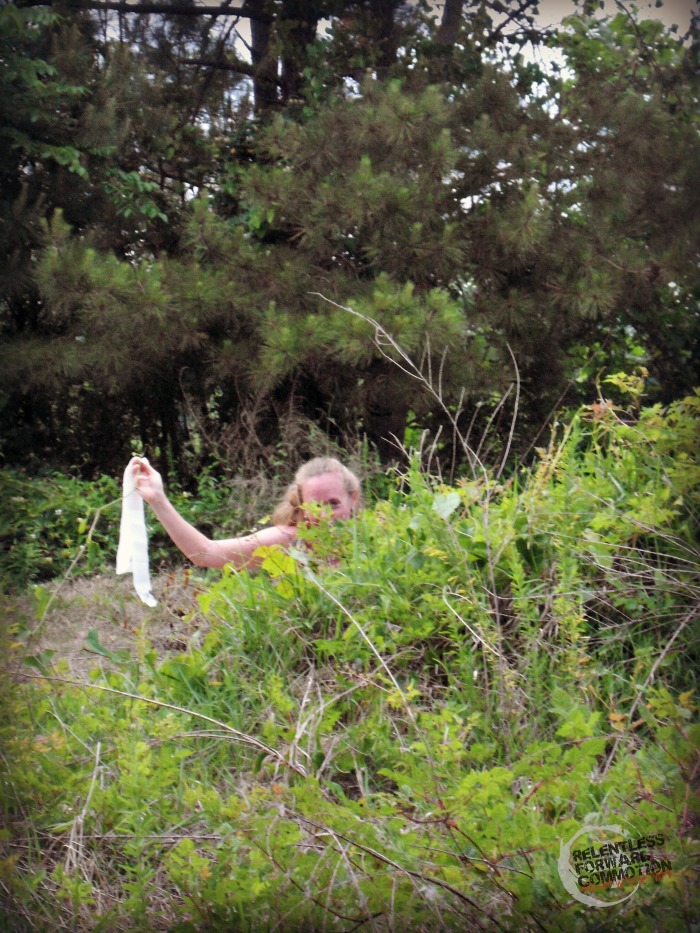 I once wrote an entire blog post about pooping in the woods.

Oh, the magical and wonderful things your imagination will come up with in the sleep deprived hours of ultra running!  This past weekend, I had the pleasure of watching an incredible athlete finish first place in a very difficult 100 miler.  When we complimented him on how strong he looked running into the finish line, he told us he had sped up to try and catch that ” guy in blue” that was always ahead of him. He could never seem to catch him.  (Spoiler alert: there was no one in front of him.)

But don’t limit your childlike imagination to fellow human beings.  Hell, if you’re tired enough, even the trees will come to life and keep you company. 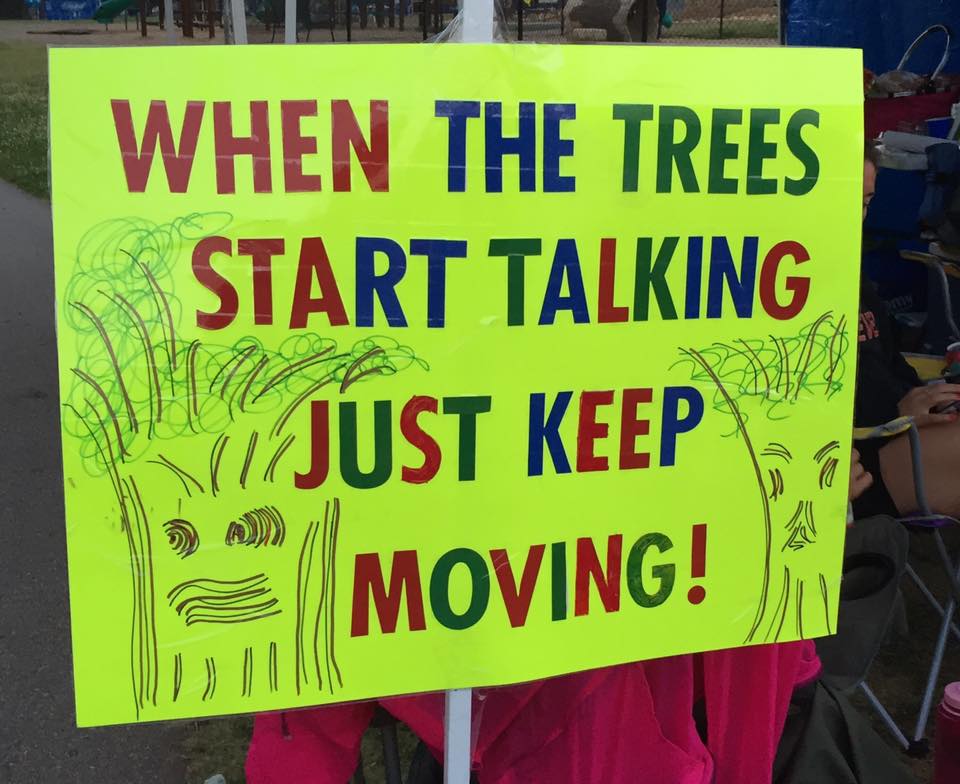 So as you can see, the similarities between toddlers and ultra runners are uncanny.  Classier, more mature adults may scoff at the notion of reverting to such toddler ways.  But personally, I’ll stick with the words of Peter Pan: “Don’t grow up, it’s a trap.”