In the past few years of writing, I’ve put together a number of posts for various publications about the importance of NOT running with a GPS all of the time.  Namely, to ensure you don’t become dependent on the thing, but also to learn how to really listen to and read your body and pace based on effort, not simply relying on a digital readout.

Coincidentally, last week I realized that GPS watch or not, I still have absolutely no idea how fast I’m running, ever.

The last few years I’ve strayed away from wearing GPS watches for the most part.  As I gradually shied away from the roads and hit the trails, I realized pace is a completely subjective crapshoot anyway, so why bother keeping track.    You may run 8:00 minute miles on a flat, non technical trail, and then 9:30’s on more hilly climb, and then 23:00/miles if you are LUCKY on the face of a ski mountain.  Pace means nothing in these instances, it is completely relative to the terrain you are facing.

Last week the local running shop here in Myrtle Beach decided to put a twist on their weekly Wednesday night group run, and made it a four mile “prediction” run instead.   The idea is this: you guess how long it will take you to run 4 miles.  You are not allowed to carry a watch, a GPS, a phone, an iPod, or anything that might clue you off to how fast you are running, how far you’ve run, or how much time has elapsed.   The winner of the prediction run is not the person who finishes first, but instead the person who comes closest to their predicted time. 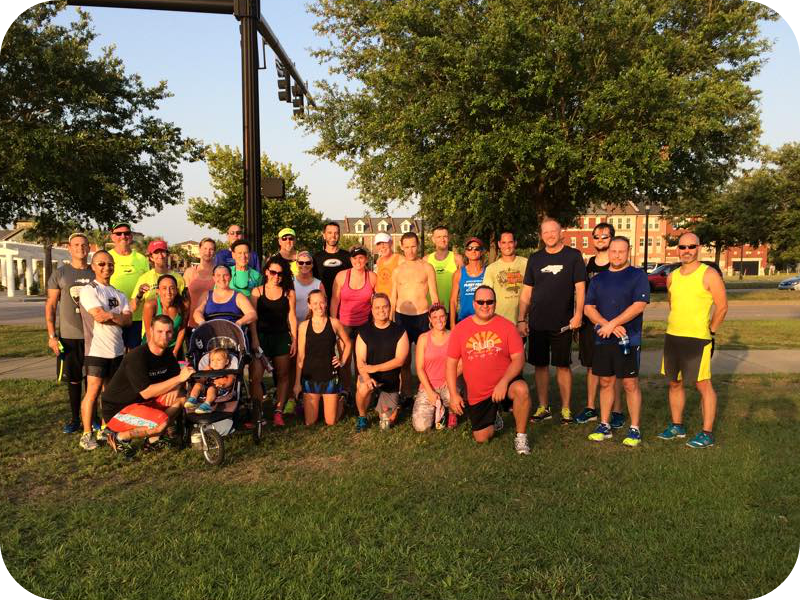 I figure there are three ways to run a prediction run.

1) Pretend it is a race.   What is your current (and recent)  PR for that distance? Predict that…then run your ass off.  Chances are you have a current pace “ceiling” that you aren’t going to surpass.  I mean, if your last recent 5K PR was 20 minutes, it’s not very likely that you are going to bust out a 16:30 simply because you don’t have a watch to reference.

2) “Happy Pace” it.  Give your best estimate to your “happy pace”, you know, the pace your body naturally goes into when you are out for an easy run.  Multiply that by the number of miles you are running and voila, you have a prediction.    Run “happy” until you are done.

3) Wing it.  Realize you have absolutely no idea how fast…or slow…you run at any given time.  Throw out an arbitrary number and then run like an idiot.

I opted for #3. I’m sure none of you are surprised.

It’s been so long since I have run on roads and simultaneously paid attention to my pace that I genuinely have no idea how fast or slow I run.  I opted to give myself a generous 9:00/mile “happy” pace, and thus predicted 36:06 (the 6 seconds for good measure.)

We lined up, were given directions on exactly where the course would go, and took off.  I made it what I would guess to be an entire quarter of a mile before that alter ego of mine started trying to take over.  “Look at this group you are running with, surely this must be a race!  RUN FASTER!”   As if the universe could sense what was happening, and wanted to taunt me a little further, Geoff picked that very minute to say “I need to stop at the port-a-potty…you go on, I’ll catch you.”

I was left to my own devices.

Somewhere between 0.75 and two miles, I started picking people off one by one.  My inner, sensible voice was simultaneously shouting “You’re going too fast!” while the obnoxious runner side of me retaliated with “NEVER!  No such thing! RUN HARDER!”  The obnoxious runner voice convinced the sensible side of me that the reason my heart rate was so high and I was sucking wind was because we aren’t used to running in this heat and humidity. Obviously.  It made perfect sense, always blame the weather.   In fact, it was so hot that day, I actually wore a running skirt.  That never happens. 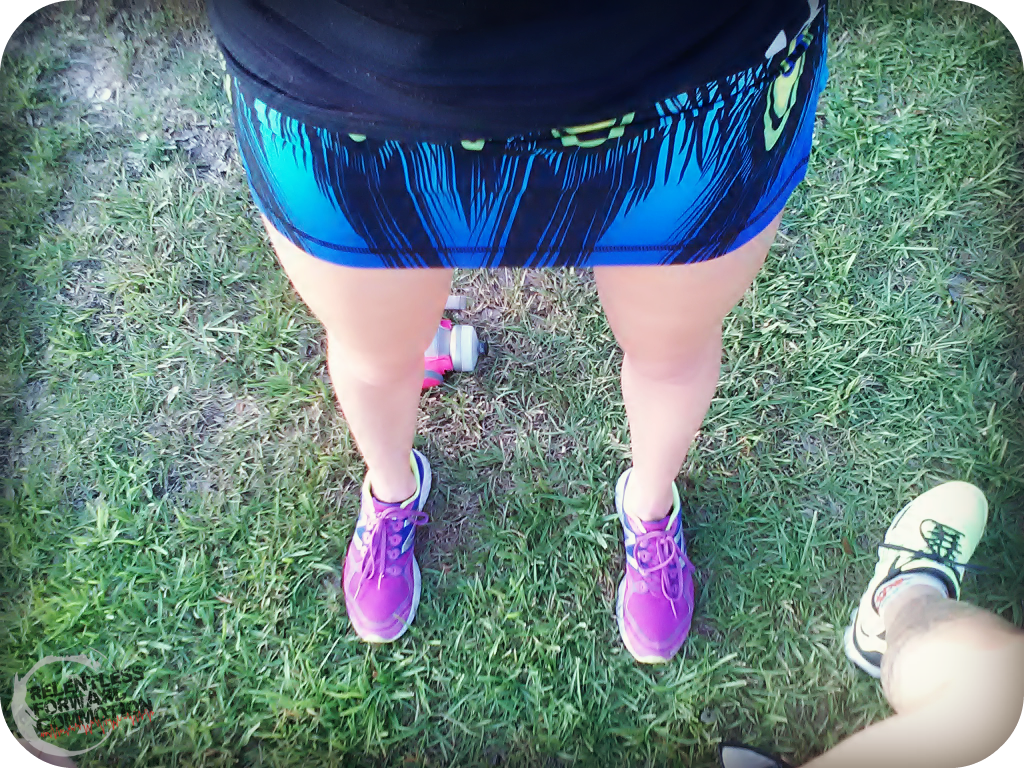 My photographer has completely slacked lately at taking photos for blog posts, so here’s what you can call a “skirt selfie”.

And for some reason, despite the fact that it didn’t matter whatsoever,  I didn’t want anyone to pass me.

I hit the 2 mile turnaround (a giant fighter jet on display in the park), ran a few feet in the opposite direction, and stopped dead in my tracks.  I saw Geoff running at me, visibly tired, and shaking his head.  My pacer, my level head in the racing world, gave me the all-knowing look when I sheepishly said ” do you think I’m running faster than a 9:00/mile?” And just like that the sensible side of me returned.

So I stood still for a good minute and waited for Geoff to make his own round trip to the fighter jet and meet back up with me.

And then I took off running again.  The next two miles consisted of Geoff and I disagreeing with how fast we were actually going.  He would tell me it was too fast, so I’d slow down.  Then I’d tell him it was too slow, and we’d go faster.   This happened for the next 1.5 miles until I finally caved and said “Fine.  Let’s run this last half mile at a recovery pace.”

And that, my friends, was the final straw in the wrong way to run a prediction run.

I crossed the finish line shouting “I ran too fast. And then I ran too slow.” without actually knowing my finish time. 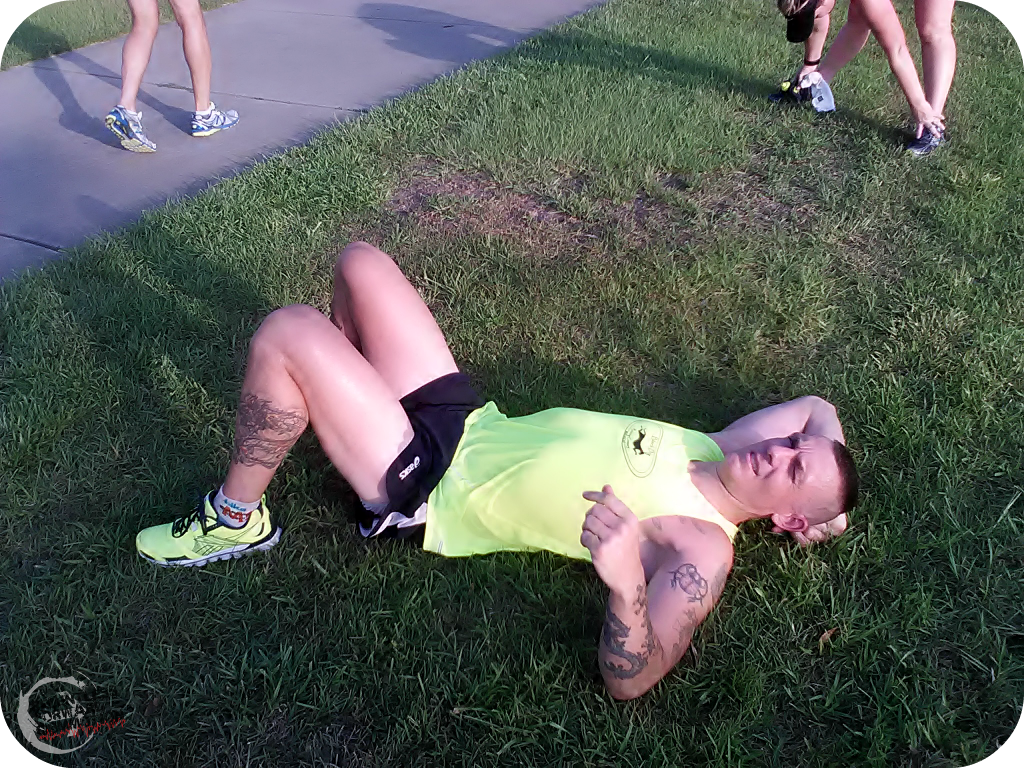 Turns out our final time was 36:46 (or something like that).    I suppose 40 seconds isn’t that bad if you average it out over four miles.  Regardless, a great , albeit hot, run was had that night.  Come fall when I need to start concerning myself with marathon training and pacing again, I’ll consider wearing my GPS watch more often.

But for now, it’s back to having no idea what I’m doing.  Otherwise known as enjoying the run.

Do you know your “Happy Pace”?  How in tune are you with your running?