It was with very little notice that Reebok and Spartan Race announced to the general public that they would be hosting a one of a kind event at the Reebok headquarters in Canton, Massachusetts on April 27th, 2014.  The Reebok Spartan Race Invitational would be the first ever “Olympic” distance Spartan Race, and would be held as a part of the Reebok Fitness Experience festival.  A 1.5 mile course with over 30 obstacles, limited entry (only 800 spots available), and a ton of giveaways at the finish line; many Spartan enthusiasts were excited to give this new distance race a try.   Geoff and I were fortunate enough to gain entry to this race, and since Canton is just about a 2 hour drive, happily made our way over for the event. 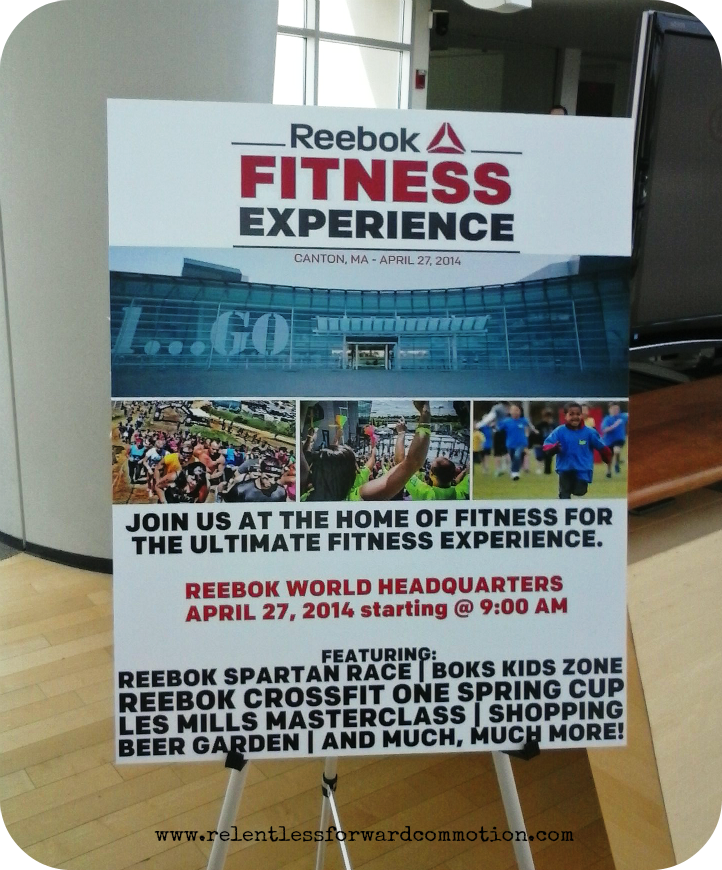 Being that the race was held ON Reebok property, parking was not an issue, as there were multiple parking garages and security/staff directing traffic.  In fact, there was so much available parking that they were even able to close off parts of the parking garage for the race itself (as we ran through them).  Parking was free for this event. 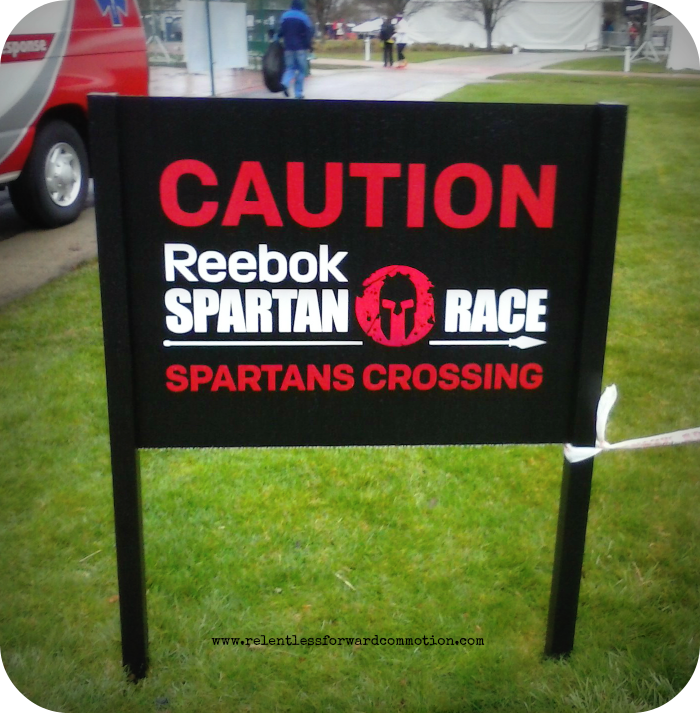 The course utilized a lot of sidewalks and walkways on the Reebok campus.

Registration was quick and easy, bag check convenient and again, free for this event.   (When you become accustomed to paying $10 for parking and $5 for bag check, the occasional freebie totally makes your day).   Walking towards the festival area from the parking garage, I immediately said to Geoff “this feels like a mini version of the CrossFit games!”  There were vendors everywhere selling their Paleo goodies as well as other CrossFit inspired goods, and a ton of incredibly fit athletes in bright neon clothing…a stark contrast from all of the Spartans who all wear black (including yours truly, haha). 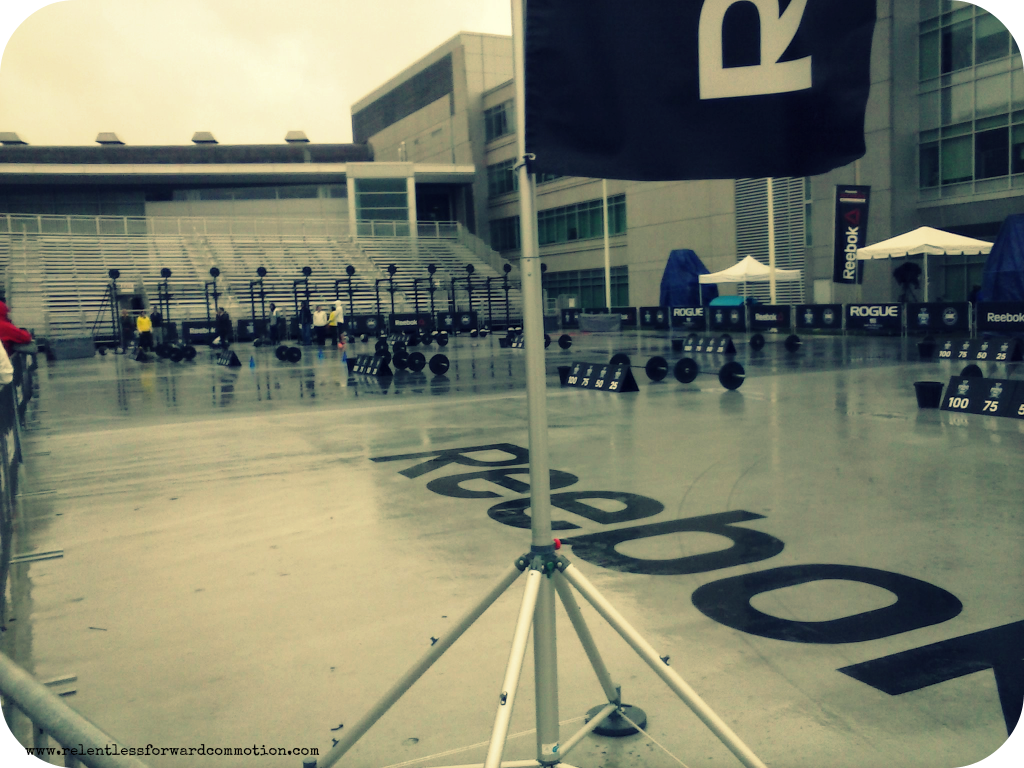 Waiting for the athletes…

My major complaint for the day:  the freaking weather.   I know, I know, neither Reebok nor Spartan has control of such issues (though I did file an official complaint with Don Devaney).  It was 40 degrees, overcast, and damp.  Good ol’ spring in New England.    After a team photo… 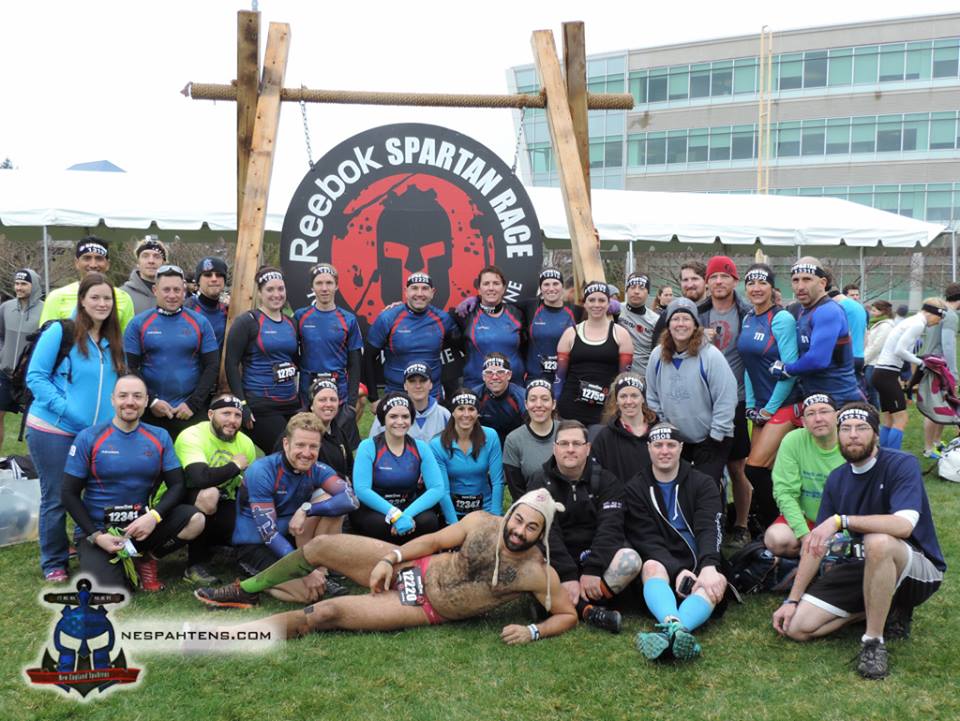 …we checked out bags and headed to the start line.  As this was a short course, waves went off every minute for five participants.  This actually spaced participants out perfectly in my opinion, as I didn’t wait in line at any of the obstacles.   However, because of the wave start, we greatly misjudged our own starting time…what was supposed to be 10:00 ended up being much later while we waited in the start line.  I, in only a tank top and arm warmers because I was overly optimistic for warm weather, froze my ass off.  Thankfully I had a big warm boyfriend to bear hug me all the way to the start line.  While this prevented hypothermia, it certainly was a horrible pre-race warm up strategy.     My muscles were locked up and tight, thus I decided I would enjoy the course, and not all out “race” for time.

Finally it was our time in the starting corral.  A quick chat with Spartan emcee Dustin, including Geoff asking if there were any port-a-potties on the course, to which Dustin replied “dude…it’s a mile and a half” (sadly, Geoff wasn’t kidding, haha)   And then we were off.

A few small walls, and then we immediately hit the pavement and turned into a parking garage.  FYI: the Reebok All Terrains aren’t that great on pavement, but I’m guessing you probably assumed that.

I’m not going to bore you with an entire play by play (sadly, even of a 1.5 mile race…but THIS VIDEO does a good job showing everything), but here’s a general summary: the course itself was incredibly obstacle heavy, which I really enjoyed. I love running, but it was a fun change of pace to always see the next obstacle in front of you (and to not worry about any ski slopes).   The MAJORITY of obstacles were tame by Spartan standards.  The rope climb was half of i’s normal height.  There were bungee cords to crawl under instead of barbed wire.   No spear throw, no fire jump.    Some obstacles, however, were certainly a bit harder: the sandbag carry was a standard 50 lbs across the board for both male and females, and was a true sandbag…not the neoprene “pancakes” we have become accustomed to (which are far easier to hold).    And the traverse wall, which I’ve never failed, kicked my butt.  The blocks were ridiculously far apart and just covered in slippery mud.  Thus, they resulted in my only set of burpees for the day.     In no particular order, a few of the obstacles: 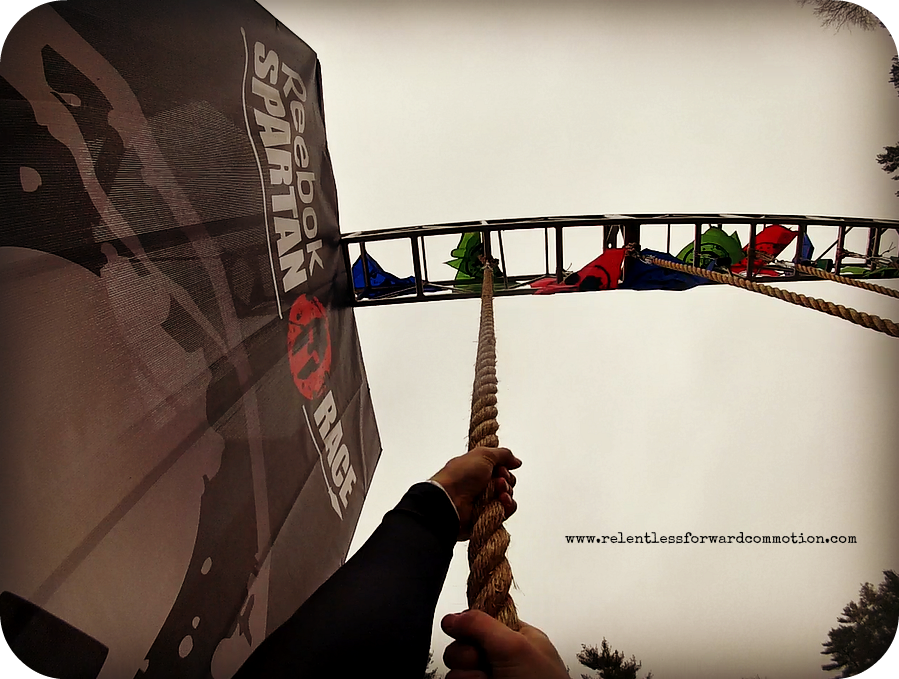 View from the …bottom. 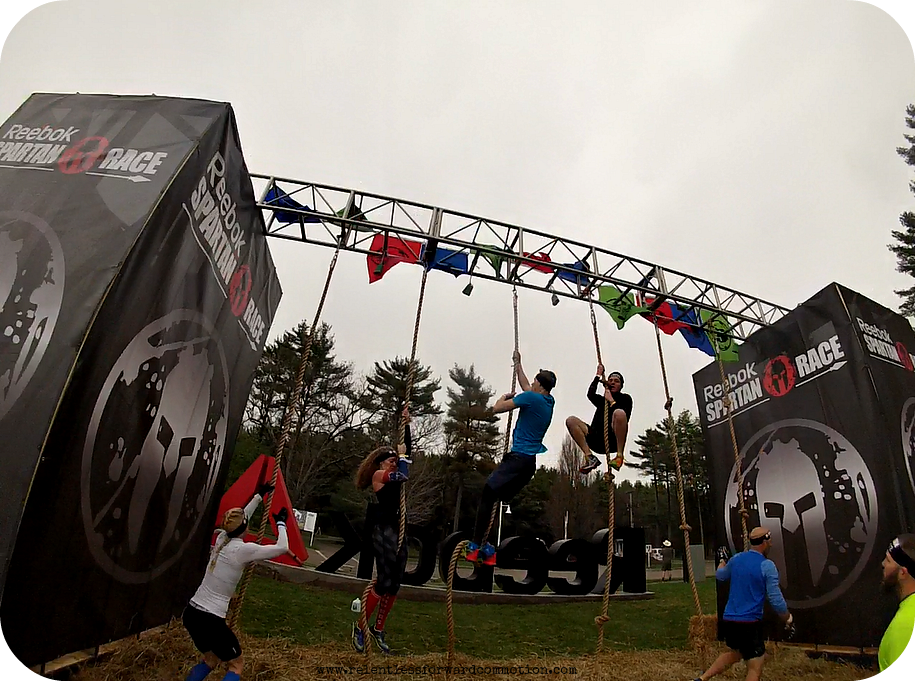 On my way back down. 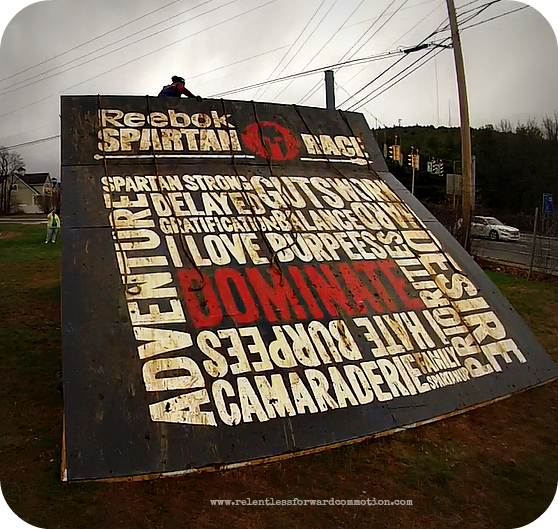 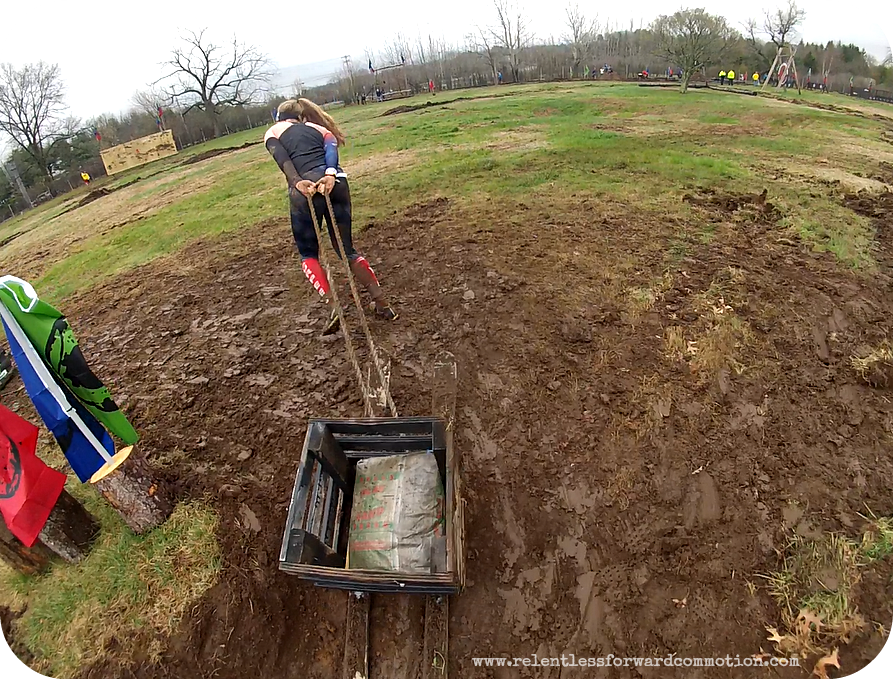 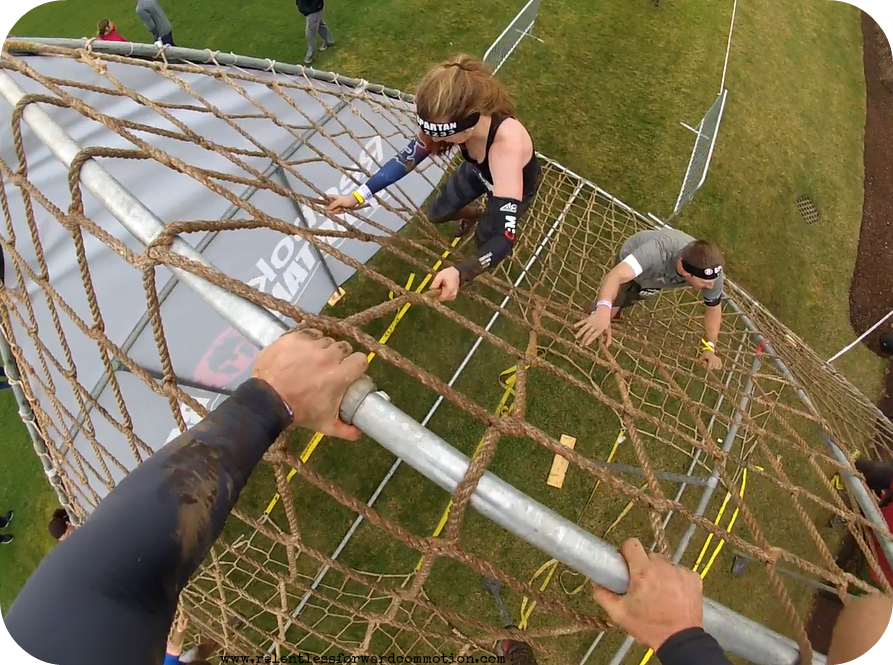 Up and over this cargo net twice. 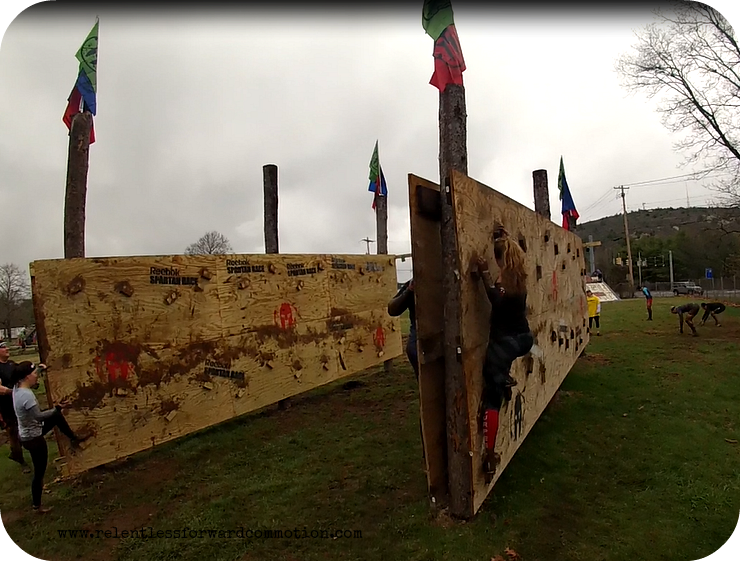 The hardest traverse wall I’ve ever encountered. Note, the one to the left facing the picture? I’ve conquered that very wall. Should have stuck with what I knew, haha.

– I got caught in the camouflage netting that we crawled underneath.  It was covered in tiny little metal rings, and somehow I managed to knot one up in my hair really good.  Truth be told (and I’ll spare you the gopro video) I threw a minor freak out and told everyone to stop moving, which confused and probably irritated a handful of other racers who were pretty certain I was having a diva moment (I was.)  I honestly feared I might be scalped, it was so far tangled in my hair.  Geoff finally freed me, and I kept running. After the race I found the medal ring still stuck in my hair. I put in my medal as a memento of that time I almost (but not really) got scalped at a Spartan race. 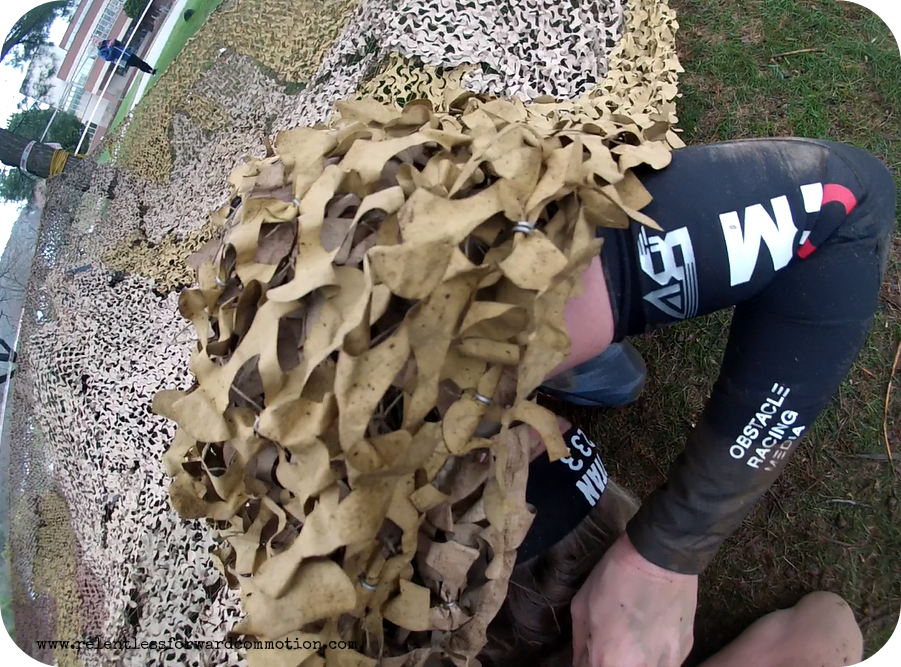 Still shot of me freaking out, and Geoff coming to my rescue. Not the sort of race injury I would have ever imagined…

– I beat the freaking monkey bars.  They were uneven, decently spaced apart, and some of them spun.  It was a HUGE personal accomplishment for me, those monkey bars have haunted me for years (especially after I broke my hand last year.) 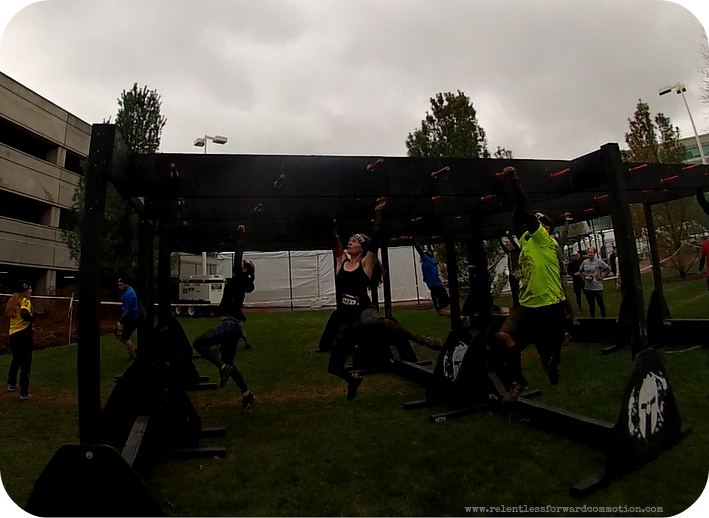 I absolutely swing my legs like a monkey on these things. I suppose that is appropriate…

– Seeing Jenny (Geoff’s sister) on the course.   She took some pictures and cheered us on! 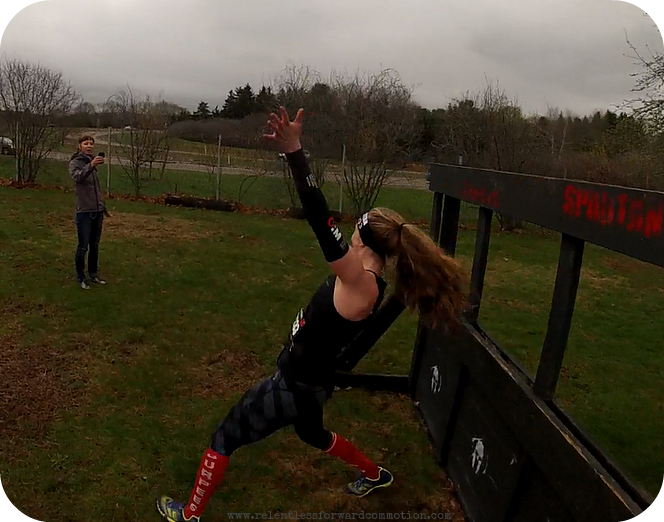 1) The proper way to exit the “through” of the “over, under, through” walls.
2) I win first place for spirit fingers.

– Just enough mud to get the point across, not enough to freeze my butt off.  Don’t get me wrong, I love mud, but it was really cold out, and we’ve already established that I’m a “fair weather racer”. 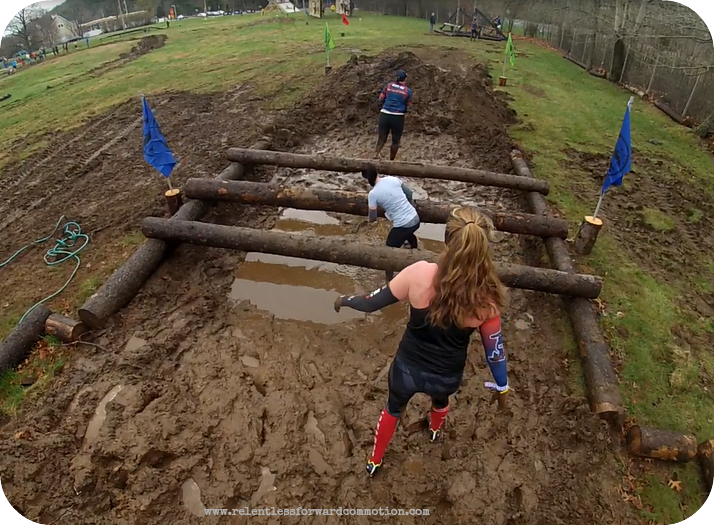 The finish line came before we knew it (36 minutes), and we were handed a ton of goodies at the finish line.  Special edition shirts, dog tag medals, an advanced, unedited copy of Joe DeSena’s book Spartan (the f*ck) Up, and the full line of Spartan Fuel. 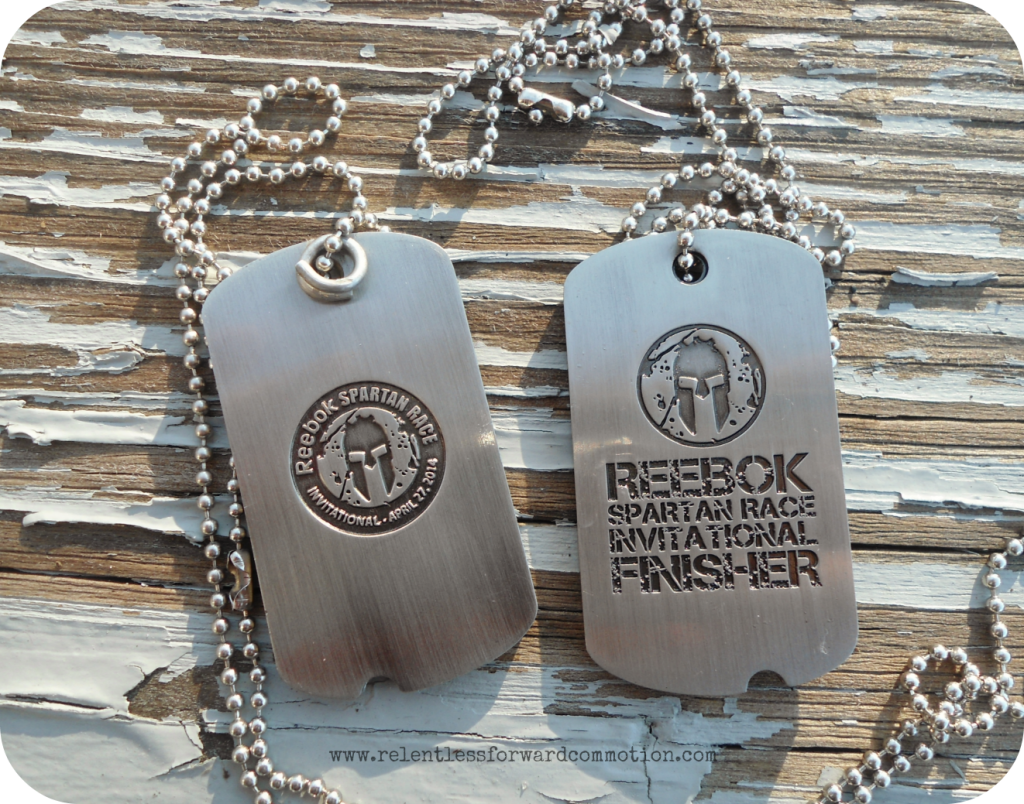 On the left medal you can see the tiny metal ring that lodged itself in my hair. 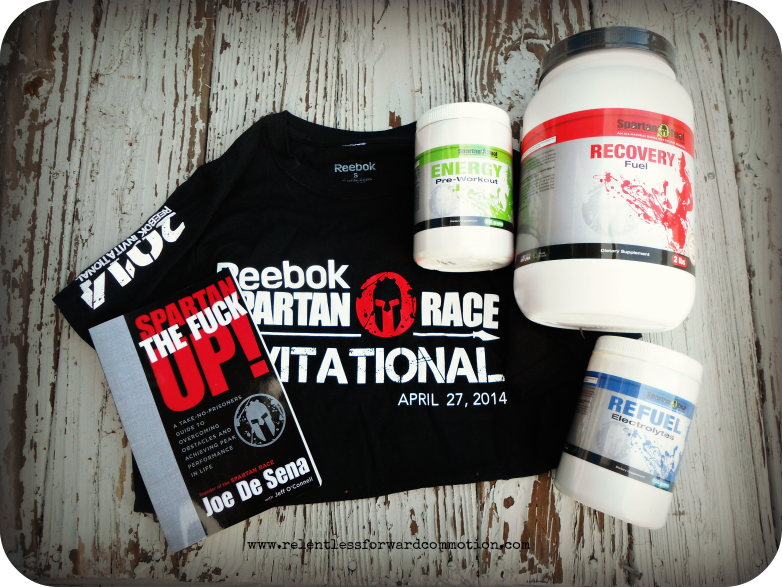 In addition to all of the goodies, we were given a free beer coupon, a free meal coupon (they had veggie burgers!), and a coupon valid for 40% off of everything in the Reebok retail store, which was open to the public that day. 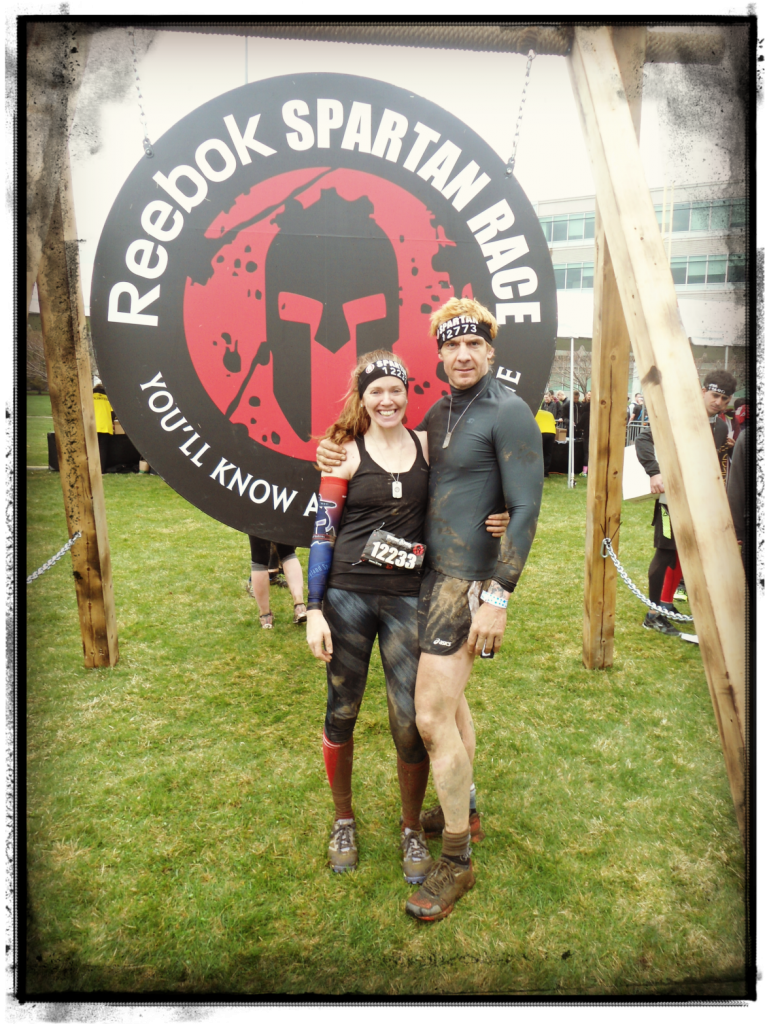 The race itself was an interesting concept.  I felt as though it was designed as an “intro to Spartan racing”, which I suppose it was, as it was a part of the Reebok Fitness Experience.  It wasn’t as grueling as Spartan races typically are, and that surely has to do with the lack of ski mountain face for us to trudge relentlessly up and down, haha.  But also with the scaled down versions of the obstacles, it felt like a great way to give people a little taste of what Spartan racing is all about.  Now consequently, the day was also a great introduction to Reebok in general for those who aren’t familiar with the company, as there were numerous other events going on, such as a Les Mills master class, BOKS kids events, and the Reebok CrossFit spring cup competition .

On the other hand, the idea of such a short, yet obstacle heavy, course was very appealing. It truly tested your physical strength more so than your cardiovascular endurance (and mountain goat legs, I’m just saying, I’ve begun to notice a trend.)  I’d like to see more races similar to this one come up in the future, but perhaps with full size obstacles.

After changing, Geoff, Jenny, & I checked out the campus and did a little shopping, then settled in with our post race beer and veggie burgers as we watched the CrossFit competitors do their thing.

Eventually we were shaking too much in our bleacher seats (did I mention how cold it was?) so we decided to head out for the day.  But before leaving, for laughs, I checked my results: 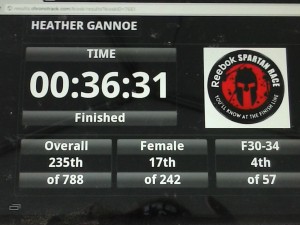 Huh.  Who would have thought I’d do THAT well without actually racing.  That’ll teach me to:
a) pose for too many photos
b) spend more time talking and less time running, and
c) waiting around for Geoff to do his buprees because he failed the log hop and I didn’t (Just kidding Geoff. But seriously…work on that balance).

THANK YOU Reebok & Spartan Race for an incredibly fun experience!