I don’t remember the exact context of the conversation.  We were about 25 miles in to our run, and my friend Raquel was discussing parties.  “I don’t go to parties anymore, I’m too old and tired for that” I quipped.  “Unless…does this count? Friends, music, junk food, beer, and fun…well at least my kind of fun? That’s a party, right?”

It was around 2:00 in the afternoon, and Raquel, Geoff, and I, along with about 100 other runners of all ages and abilities were part way into our 8 hours of running 1.8 mile trail mile loops around the Coleman Retreat in Jamestown (or maybe it was Shulerville), South Carolina for the first ever “Retreat Repeat“.   What had started off as a fun idea by local ultra runner Nathan Dewey to share some trail miles and fun with friends and family, had turned into a full-on event with timing chips, live tracking,  swag, prizes, and more.

The “fun idea” part definitely still reigned as the theme of the day. 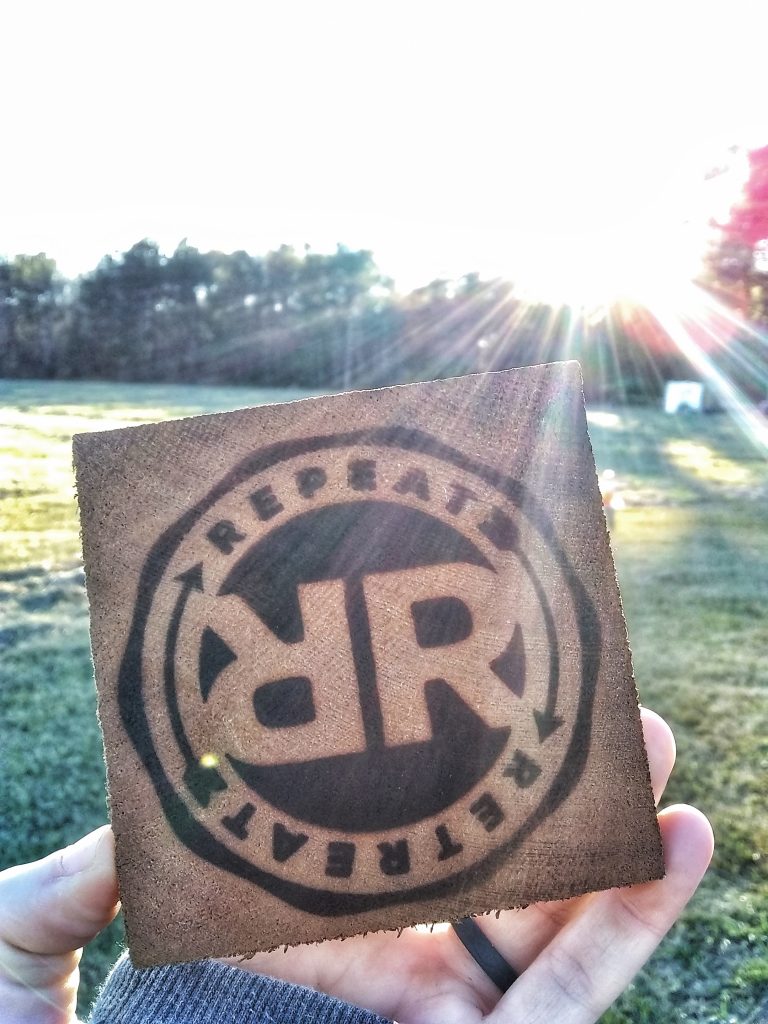 Geoff, the kids, and I drove down to Jamestown Saturday morning. Geoff had wanted to camp the night before, but after a week of sleepless nights for me, and incessant rain from mother nature, I wasn’t in the mood for camping, with kids, in torrential downpours.  Fortunately the drive to Jamestown was smooth, and less than an hour and a half after departing our apartment (and after one Dunkin Donuts stop) we arrived to a section of the Francis Marion swamp…err, forest…that we had never visited before.

Upon arriving we checked in and received our bibs, chips, a really warm embroidered beanie, a pair of Feetures! socks, and threw our names into the raffle box. 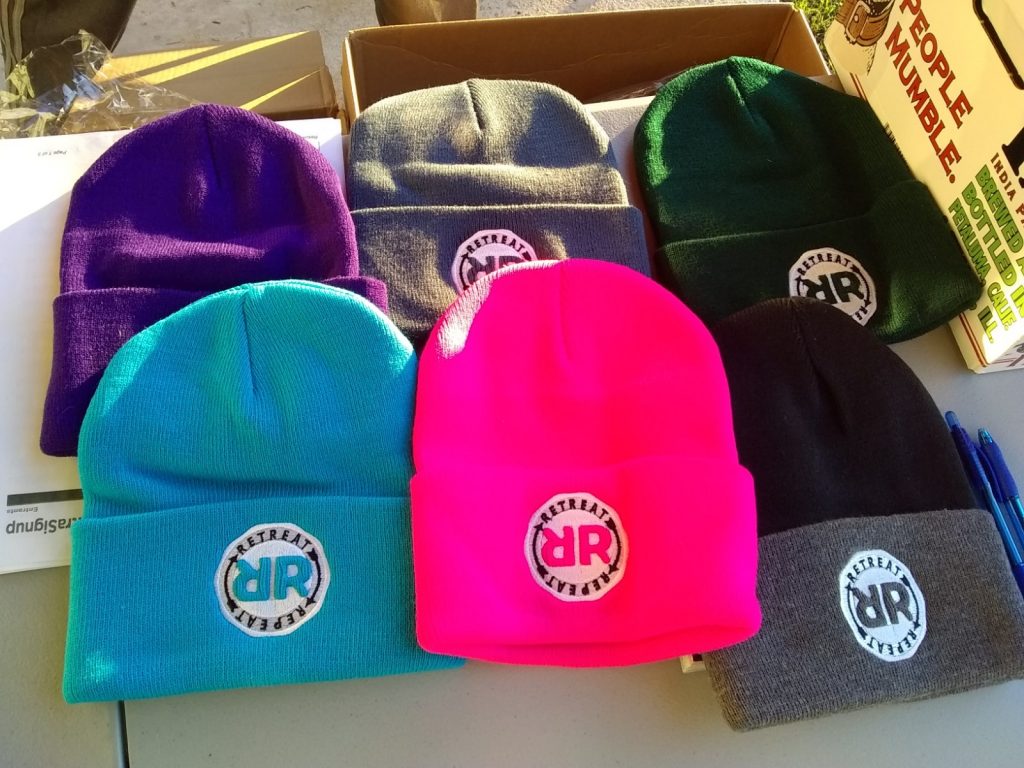 Did I mention yet that this race only cost $20 to enter?  Nathan’s goal was to simply cover costs…everything else was donated by his family, the local community, and awesome sponsors.  It truly was a labor of love, and you could feel how the community stepped in to help Nathan make it happen. 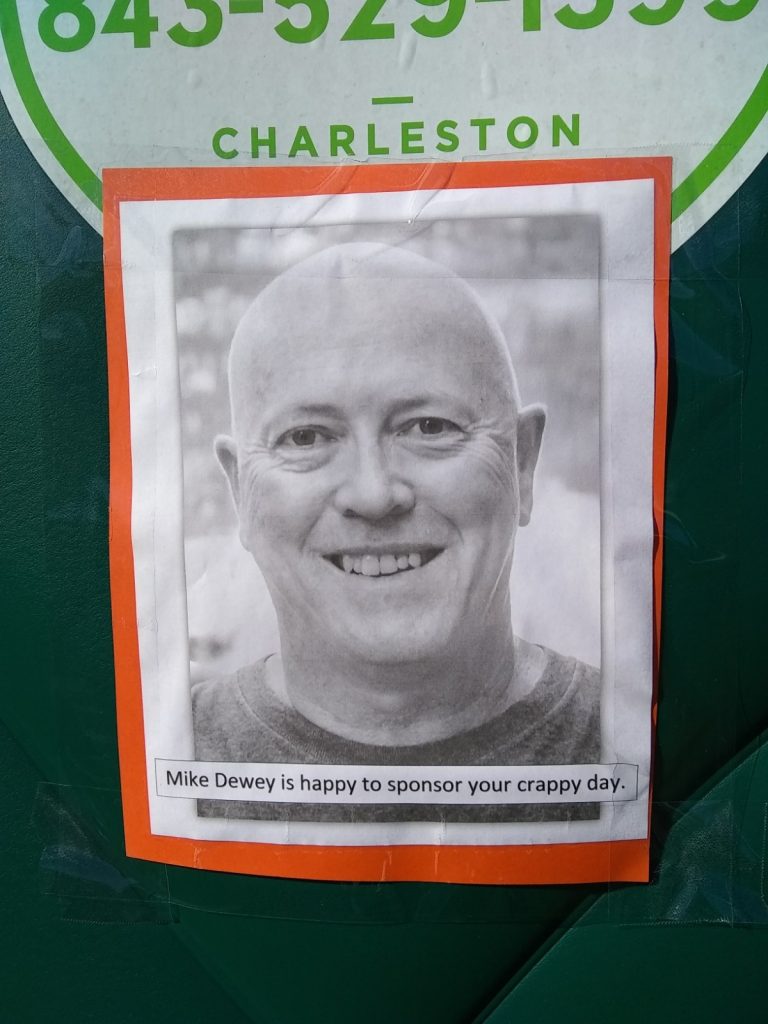 His dad even sponsored the port-a-potties.

We parked ourselves in the corner of the field with everyone else that was starting to set up. As of late, our Myrtle Beach trail crew has been growing by leaps and bounds, and we’re slowly taking up more and more space wherever we go.  A few tents and a ton of chairs later, Team Trail Weenies camp had been built. 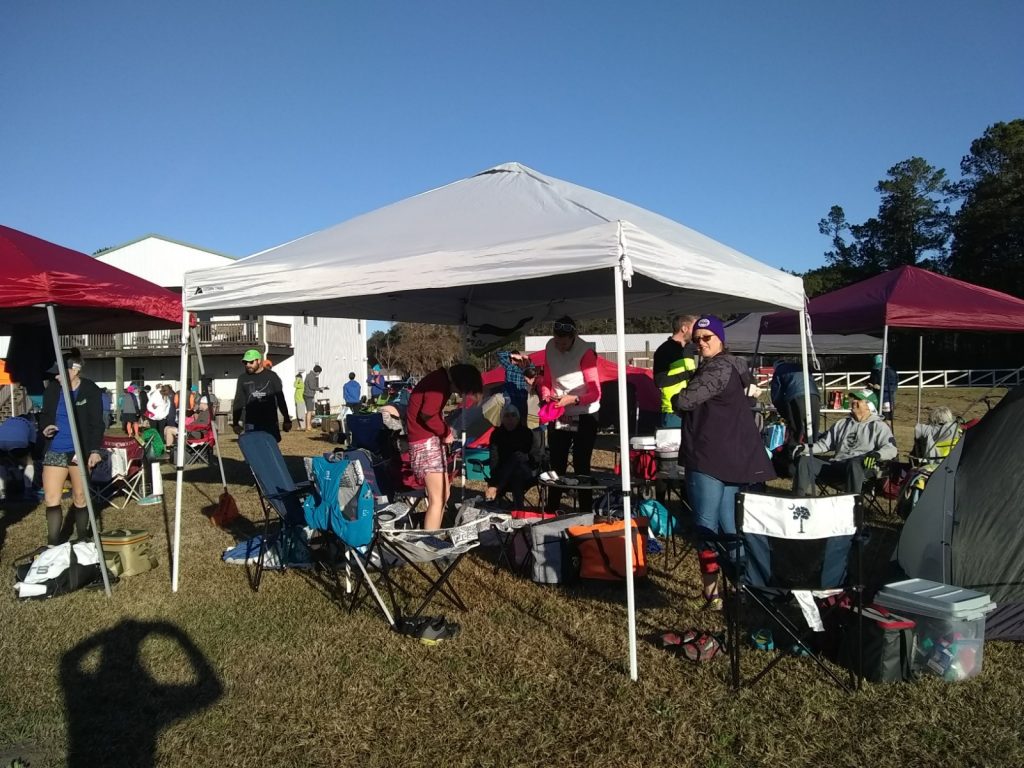 My kids were excited to participate in this family friendly event, so of course I stayed busy before the race getting them ready. From pinning chips to their hips, to double knotting shoes as only mom can do, to reiterating no short of what felt like 100 times “if you need anything, you stay RIGHT HERE AT THIS TENT and one of us will be back around momentarily”.  The boys are now 10 and 12, and this is not their first trail race rodeo.  But, I’m a mom, and chances are I’ll be worrying about them following the correct trail markings and making sure they eat and drink enough until they are well into their 40’s. It’s what moms do. 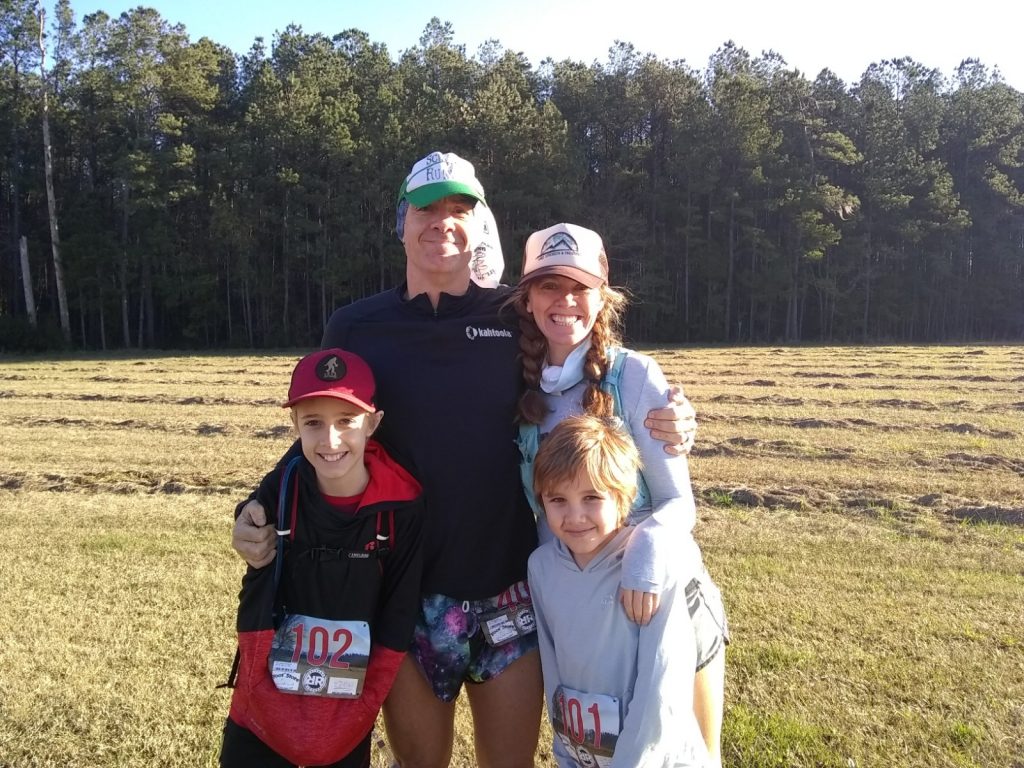 9:00 am arrived, and the group took off for the start of our 8 hours of fun. Immediately, all of the little kids in the crowd, including mine, took off sprinting. It never fails to make me smile.  I had decided to use this race as my last long training run before my next 100 attempt in two more weeks.   As such, the theme was slow and steady.

Fortunately, the course would make sure that “slow” was my only option. 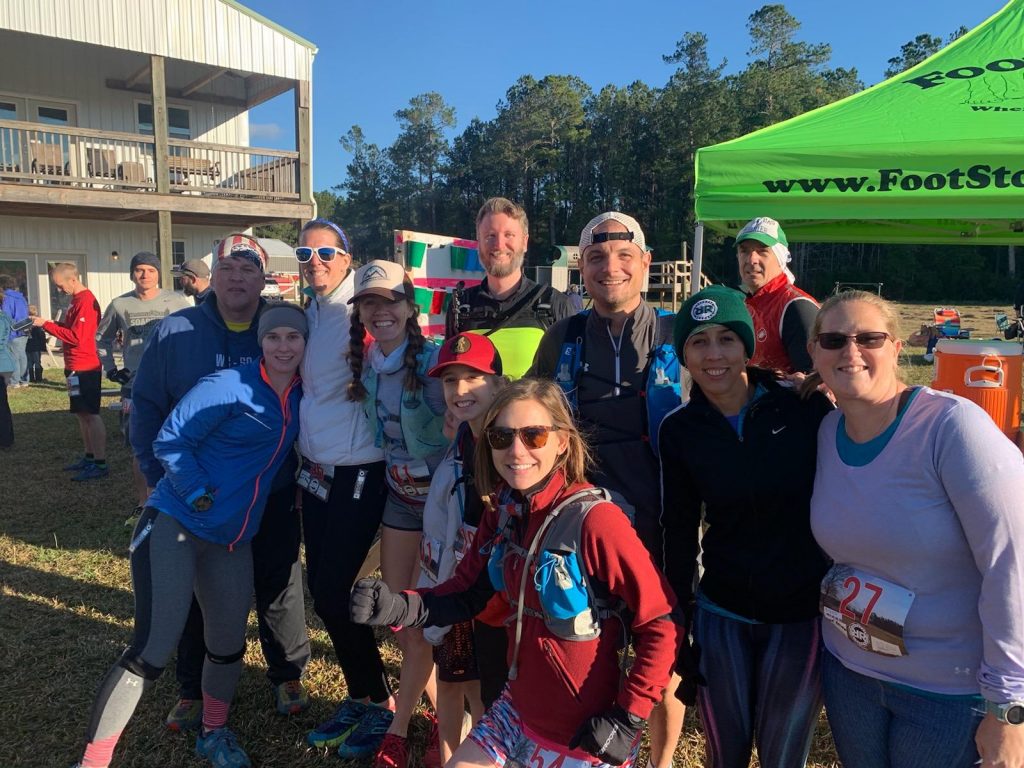 Remember the incessant rain I mentioned earlier?  Well the course, which wound through fields and the woods, was muddy, mucky, and wet.  At least 50%, if not more, of the course was a sloppy mess.  Now, please don’t get me wrong, “sloppy mess” is not necessarily a bad thing, in fact, I’d argue the challenge made the course that much more fun. 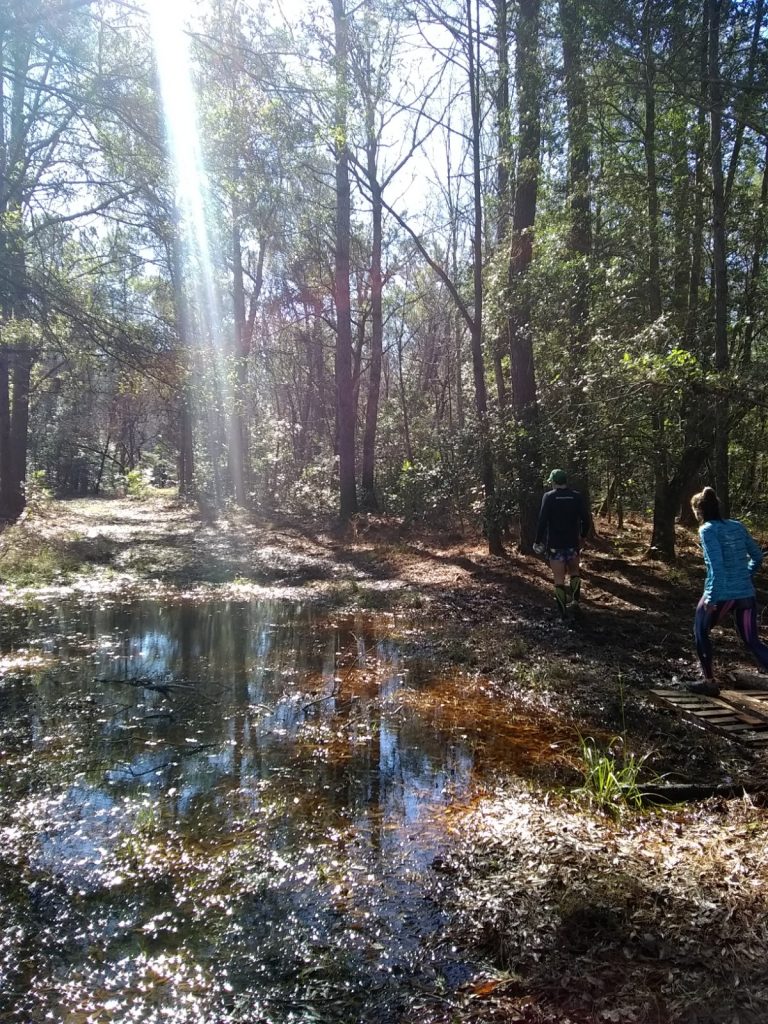 Halfway through the first loop, I caught up to my oldest son who was already struggling.  He was out of breath (could it have been the initial sprint) and was complaining that his hands hurt because it was cold.  Keep in mind, it was 50 degrees out at the start, but my boys were born in the South, so I’ll give them a pass on this one.  I let Geoff and Raquel continue on without me, and I ran/walked with my son for the rest of the loop.  He struggled, and as I encouraged him to finish that first 1.8 mile loop, I reminded him that he didn’t have to run another step if he didn’t want to. He could plunk himself down in the warm tent and play on his phone, go play on the playground with his brother, whatever he wanted to do…but he had to finish that lap.

He did finish, and as I took off for loop two, I thought for sure he was done for the day.

I was wrong.  But we’ll get back to that.

I take off on loop two.  The first loop had taken us 24:50, and I was determined to a) make up a little time, and b) catch Geoff and Raquel.  So I did what I knew I’d regret later: took off at a far too hard pace.  I knew Geoff and Raquel would still be maintaining their easy pace with some run/walk intervals, so I figured if I hammered out a few hard miles, I could catch them…right? 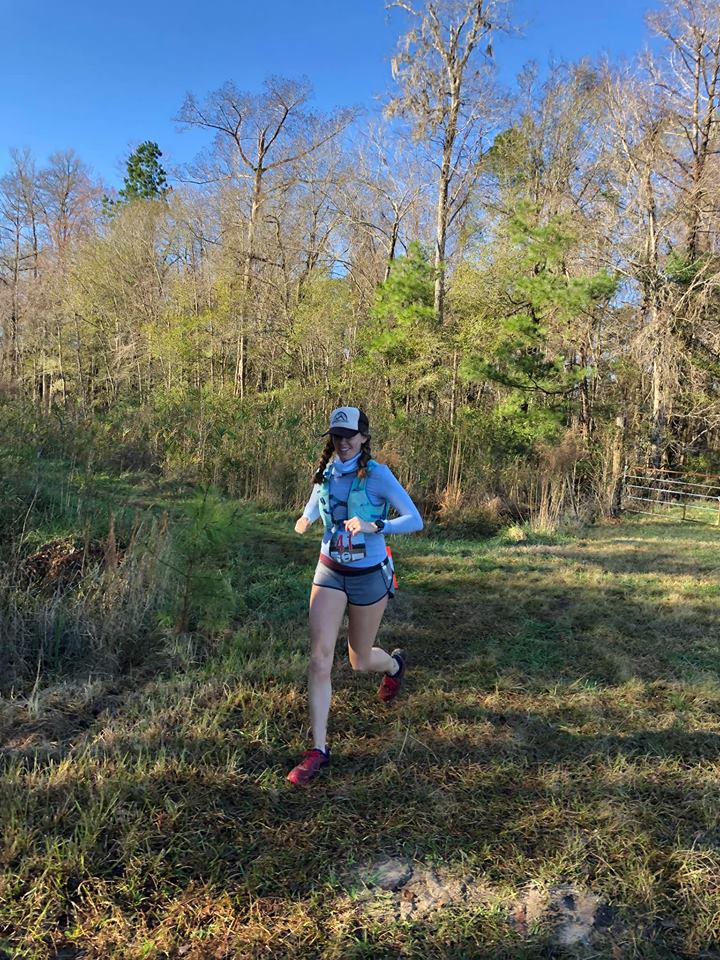 I blew past people on the course, wondering how many were thinking to themselves “silly woman, we’re not even an hour in and she’s sprinting, she’s gonna blow up real soon.”  They wouldn’t be wrong.  As I rounded the corner to the finishers chute to finish loop #2, 1.8 hard miles later, I spotted Geoff and Raquel by the food table. I figured if they stayed there long enough, I’d catch them.  If not, I’d take a short break, slow my roll, and enjoy the rest of the day by myself.  Thankfully, they stopped long enough for me to breathlessly catch up to them.

This day was just for fun, so no shame in my unconventional race tactics. 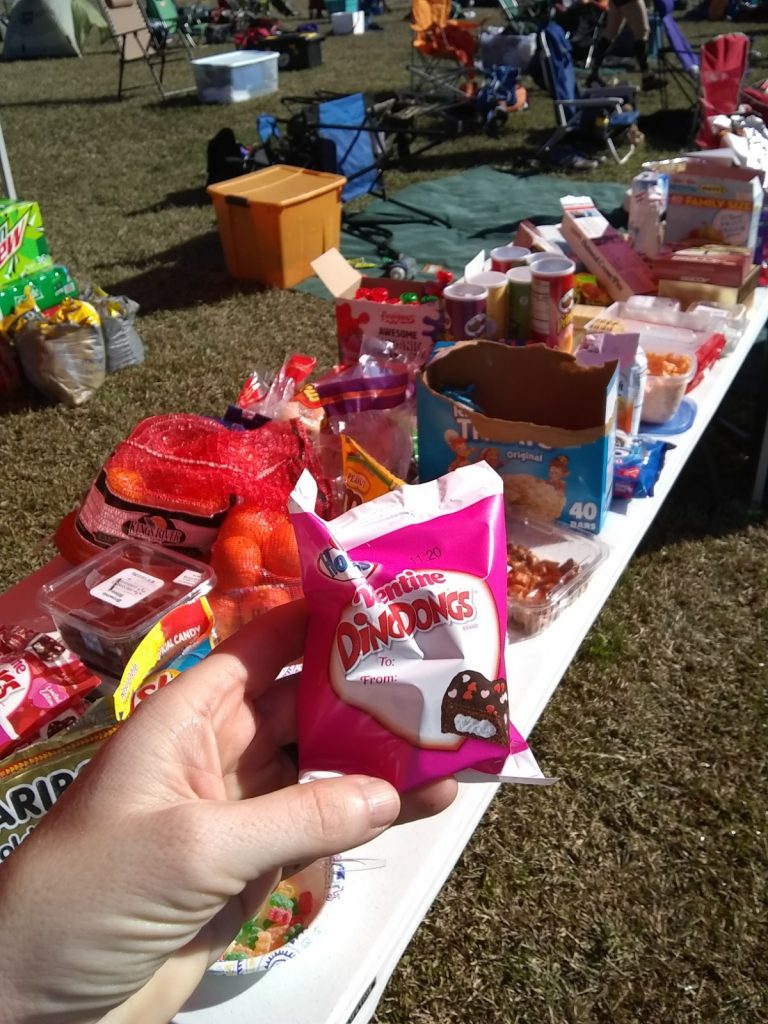 Before we head out again, I swing by our tent area to check on my kids.  I’m told by friends that one is on the playground with new friends, and the oldest…who struggled through loop 1…has already gone out for a second loop.  You could have knocked me over with a feather, I couldn’t believe it.  Proud mom moment.

Essentially, the next 15 loops consisted of Geoff running way too fast, the rest of us (Raquel, myself, and whatever other friends may have joined us for a lap or two) bitching at him that he was running too fast, and Geoff insisting that he wasn’t because his Garmin said so. We decided that whomever owned the most expensive GPS watch got to be the pace keeper, and that wasn’t Geoff  (it was Brian, with the Fenix 5X,  who confirmed that yes, Geoff was running significantly faster than he claimed he was).

It didn’t stop Geoff from trying to run…and even super fast walk… our legs off. 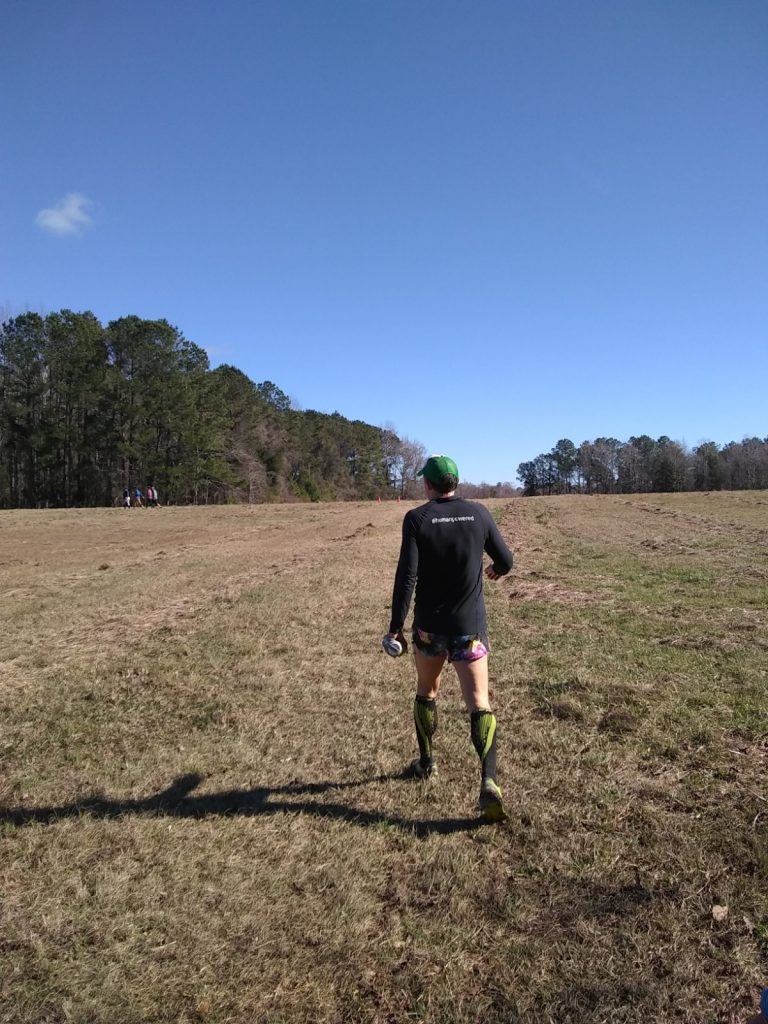 As the day progressed, the mud became deeper and more slippery, my legs became more tired.  I decided early on that 50K was going to be my stopping point, no matter how many hours I had left on the 8 hour race clock.  Frozen Hell Hole 100 is my “A” goal, and for once that inner competitive voice shut the hell up and agreed to do nothing stupid. We (me and the voice in my head) had nothing left to prove. 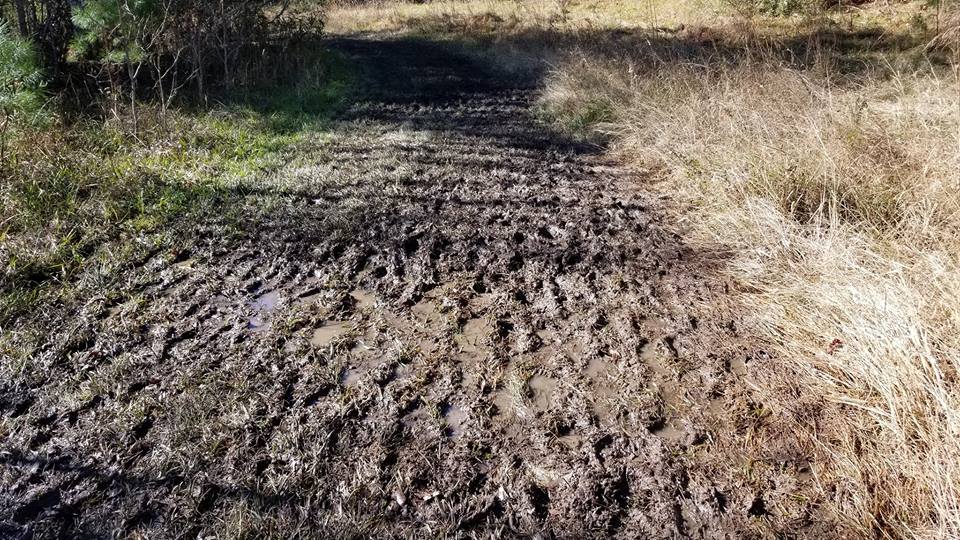 I’m not going to lie, the last handful of loops hurt, a lot.  The combination of a rough, slippery course, a week of really poor sleep, a 2o mile long run on Tuesday, and oh yeah, those 17 days I took off over the holidays due to my surprise ankle sprain (where I ate a ton of cheese and cookies and did zero physical activity), left me feeling more tired than I should have for a 50K.

During our last loop, we caught up to another group of Myrtle Beach friends who were running with my oldest son.  The kid who complained his way through the first loop was now finishing his 8th loop, to completely his first 15 miler EVER.  I was ecstatic, not simply because of the distance, but because he had motivated HIMSELF to do it, and had completely many of those miles solo.  I nearly cried as we crossed the finish line together. 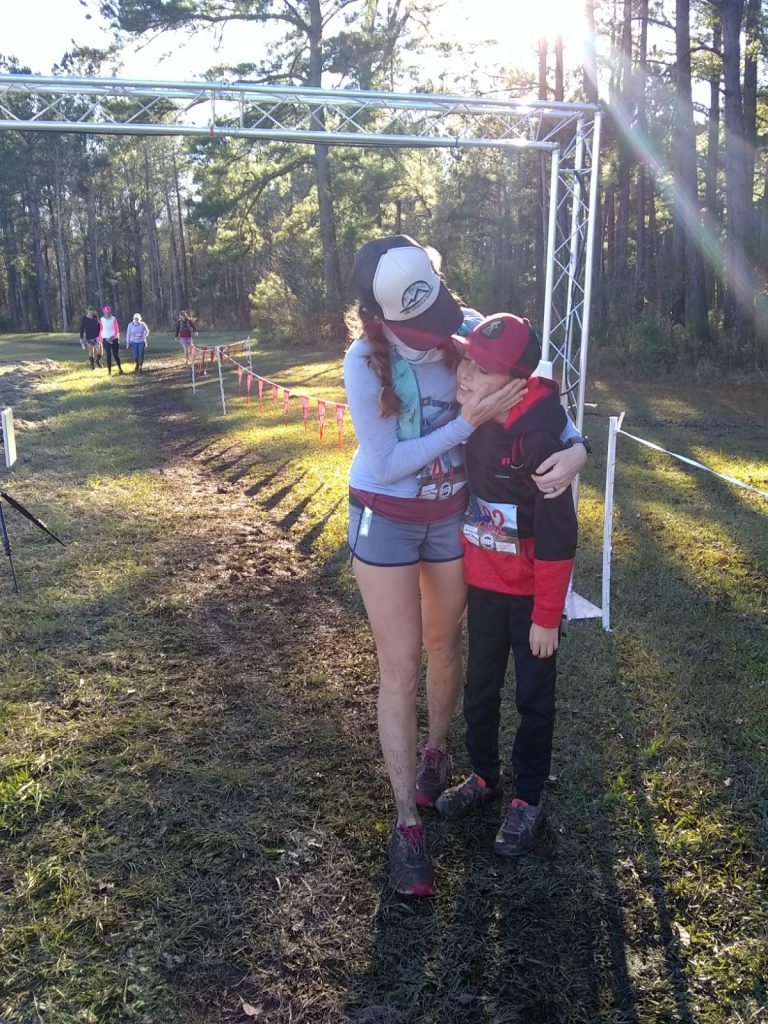 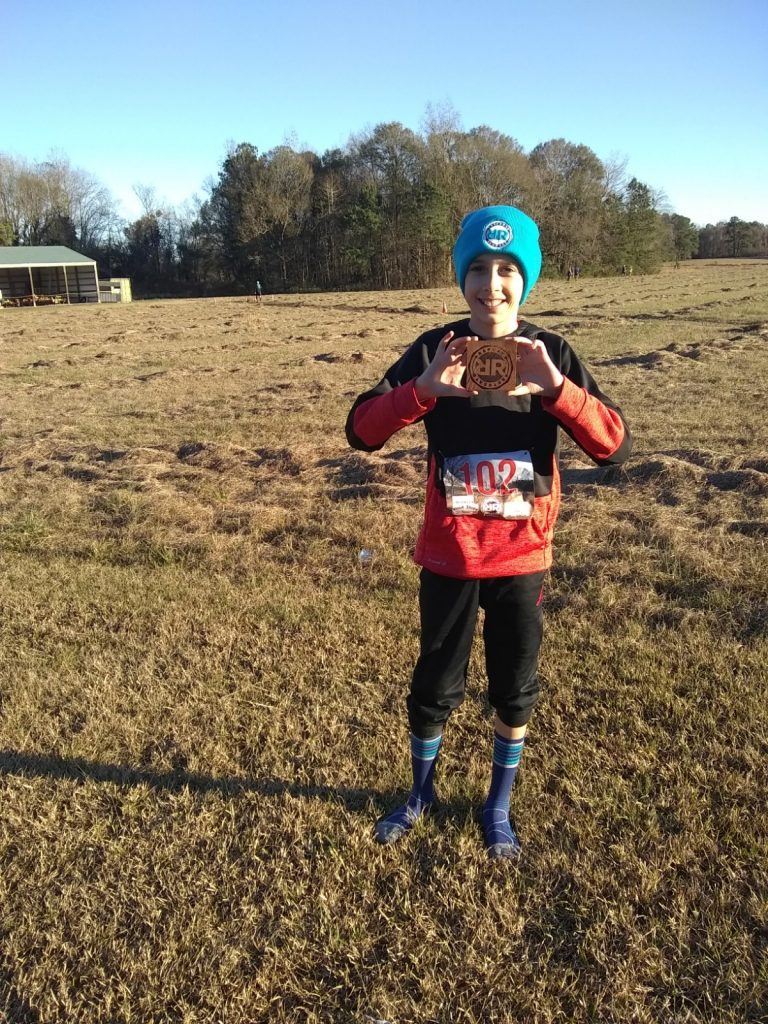 Next, I made a beeline to our camp area to ditch the shoes covered in what felt like an added five pounds of mud, and found out I was just in time for veggie burgers.  Of course, there were plenty of real burgers and hot dogs, but virtual high five to Nathan for hooking up the Myrtle Beach crew (we’re 99% veggies) with some killer chipotle bean burgers.  They were amazing. 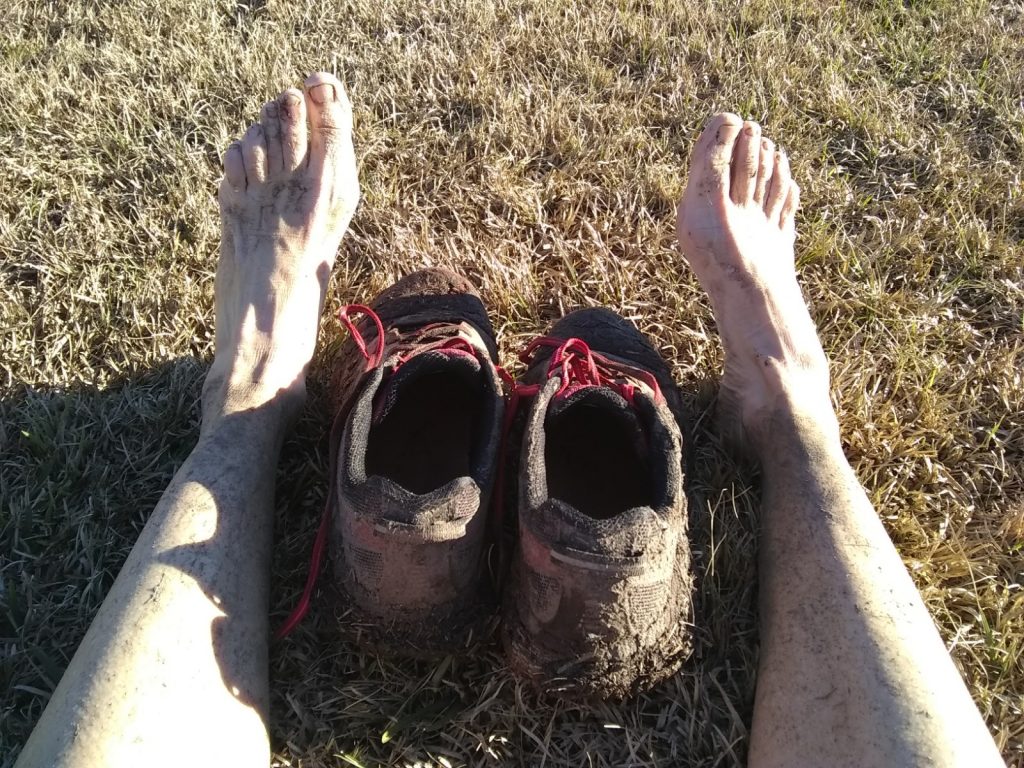 8 hours came to a close, and we all gathered for finishers awards and a raffle. I won a Trigger Point Grid STK handheld roller,  Geoff scored a pair of wireless headphones, and one of the boys won a Road I.D.  We hung out with friends for a few more minutes, before packing up our stuff and making the trek back to Myrtle Beach. 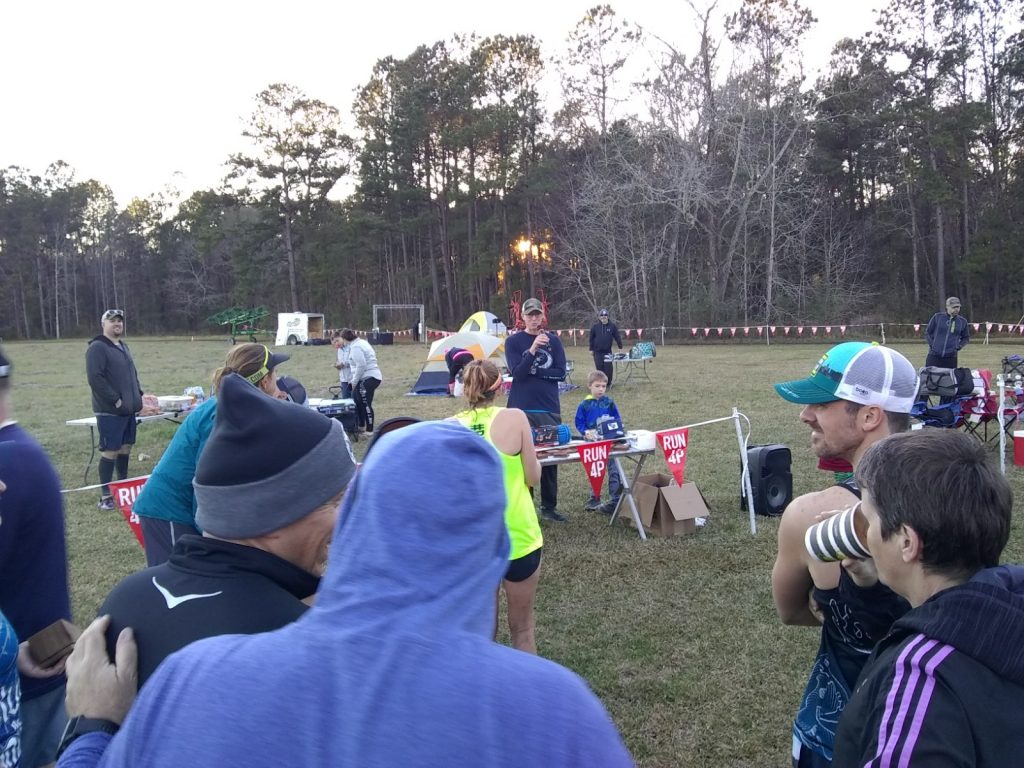 All in all, Retreat Repeat was absolutely everything I love about the ultra and trail running community.   Running, mud, laughter, friends, good food, family, and fun.   If you wanted to run hard, you could, if you wanted to have fun, you could do that too.  It was a fantastic way to start off the new year.

Thank you to Nathan for putting this idea into motion, the Coleman family for donating the gift of their retreat, Grounded Running of Beaufort for the timing, and all of the other sponsors who helped make this happen.  The running community truly appreciates you!

And a huge thank you to Raquel and Geoff for the company, my Eagle Endurance / Lowcountry friends for sharing laughs and miles, and my Myrtle Beach /Team Out of Bounds family for being so awesome, from hanging with my kiddos to feeding us potato soup.  You all are one of the reasons why I love this sport so much.

Here’s to 2019, may the adventures continue!