(Preface:  I wrote this piece last fall as a request for an upcoming book being published this summer by a friend.  Somehow in the throes of chaos and life, it was either forgotten or passed over, so as to not let 1631 words I put a lot of effort into go to waste, I’m publishing it here instead.  Hope you enjoy! ) 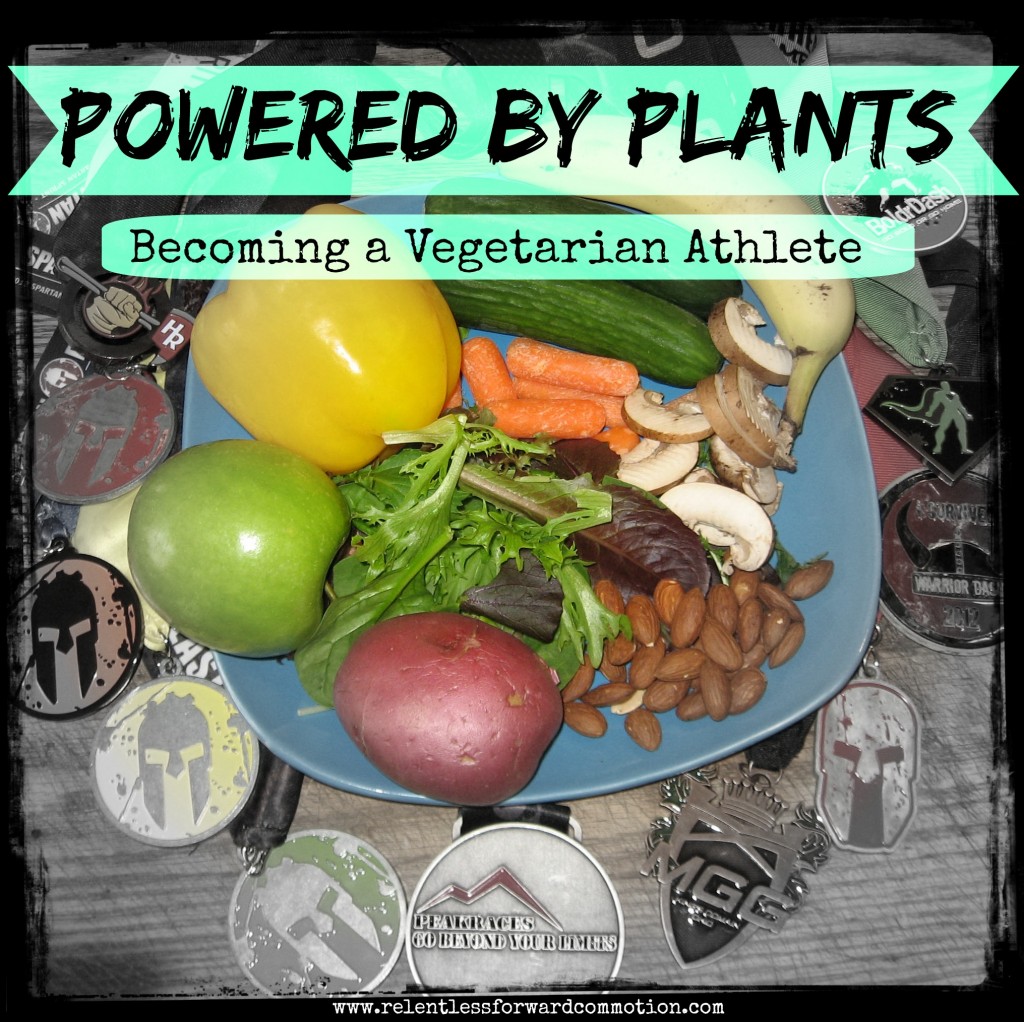 During the summer of 2012, it seemed the entire fitness world shifted its attention to the latest buzz word to hit the industry: the Paleo diet.   To “eat like a caveman” was touted as the best diet around;  grains became the enemy, and bacon became the new chocolate.   It was during that summer, when it seemed that every six pack stomach was built on grass fed beef, and every elite athlete was nourishing themselves on a hunter/gatherer diet, that I decided to become a vegetarian athlete.

Extensive personal research, combined with an increasing awareness of the shocking realities of our society’s meat industry struck a chord with my ethical and moral convictions, and I decided that I could no longer consume animal flesh.  After thirty years as an omnivore, this was no easy transition on my part.   To add to the difficulty factor was the fact that I was an athlete who was training hard, and constantly hungry.

Now, this chapter is not meant to convey an opinion that a plant based diet is superior to a diet that includes meat, especially where athletes are concerned.  I will be the first to tell you that consuming a vegetarian diet is not necessarily the best option for everyone, and that any personal concerns should be discussed with a physician or registered dietician.  I will, however, tell you how my experience of switching to a vegetarian diet has made me a stronger obstacle course racer. 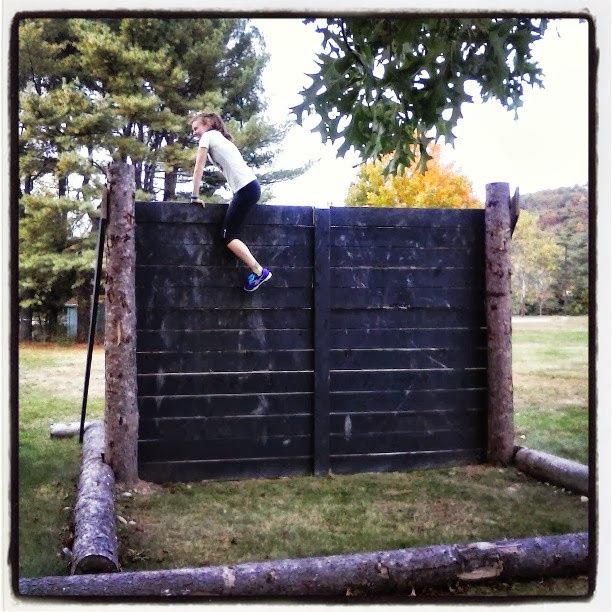 Navigating the walls at Reebok Headquarters

To put it bluntly, before I became a vegetarian, my diet was full of crap.  Sure, I thought at the time my diet was adequate, healthy even, compared to the typical American diet consisting of fast food and processed junk (though I won’t lie, I consumed my fair share of those things as well.)   Meat and grains were the majority of my sustenance, fruits and vegetables healthy compliments.   My diet was very unadventurous; I typically ate the same items over and over again.  I gave little thought to where my food came from, what it contained, nor why exactly I consumed the foods that I did.

And while the general outline of my diet seemed alright, my calorie intake well within the healthy range, I never felt very good.  Not a season would go by that I would be able to avoid whatever virus was going around.  One year, I remember a constant battle with strep throat: antibiotics would provide relief for a only a few days before my tonsils would swell back up again.   Further, for as long as I can remember, I suffered from frequent stomach issues that varied from mildly obnoxious, to sometimes crippling.  My blood sugar plummeted and spiked often, resulting in wild and frequent energy and mood swings.  Both of those issues, as you can imagine, were a significant hindrance to my athletic training.  My long runs were just as much about trying to figure out the timing of my nutrition, and how to avoid angering my gastrointestinal system, as they were training my legs and lungs to be able to handle the mileage.

When I finally decided to eliminate meat from my diet, I knew that I would have to put far more effort into the awareness of what foods I put into my body.  It is a common misconception that a vegetarian diet is always healthy.  The truth is, one could consume simply potato chips, pasta, and cookies while avoiding meat, and still be considered a vegetarian.  While my education and background is in exercise and fitness, I did have a few basic and sports nutrition classes under my belt, and realized that poor planning on my part could quickly result in nutritional deficiencies.

The first and most common question most vegetarians are asked is how we are able to consume enough protein without eating any meat.  I always have to laugh at this question, as there are numerous sources of protein that do not come from animals.  While I do still eat organic, locally and humanely raised eggs as well as the occasional dairy; there is plenty of protein to be found in nuts, seeds, grains, fruits, and vegetables.  So consuming protein is never an issue.  More importantly however, is the issue of consuming the correct protein sources. 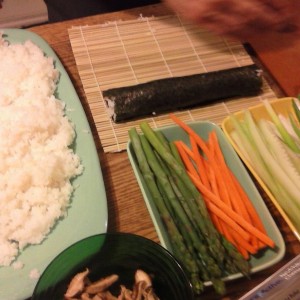 Other nutritional concerns that become present when eliminating meat from your diet are Vitamin B12, Iron, Calcium, and Omega 3 fatty acids, all of which are prevalent in large quantities from animal sources.  Of course, there are plant alternatives that are not hard to come by, as long as you are aware and actively consuming these alternatives.

But let’s leave the nutrition lecture aside and discuss the point of this chapter: how consuming a vegetarian diet has made me a better, stronger  athlete.  As mentioned earlier, during my days as an omnivore, little to no thought was given to what foods I put into my body, never mind the effects they had on my training and body.  Also mentioned earlier, was the fact that there are nutritional issues that vegetarians must be aware of to ensure adequate nutrition.    Now for the confession: when I first became a vegetarian, I initially did not pay attention to those nutritional concerns.  At first, and almost subconsciously, I replaced the meat in my diet with more grains and dairy, instead of more fruits and vegetables.  This of course resulted in a very quick weight gain of about ten pounds, as well as an overall lethargy and sluggish feeling. 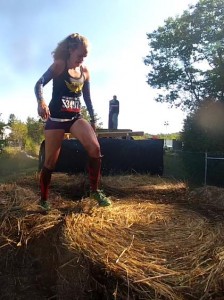 It was an eye opening experience, and a realization that it was time to become far more proactive about my nutrition.  Slowly I began to increase my vegetable and fruit intake, but more importantly, increased the variety of all non-meat foods in my diet.  In order to ensure that I was receiving all of the essential proteins, minerals, and vitamins my body required, I was forced to leave behind the monotony of the same food routine and meals I had consumed for years.  Instead, I branched out and began to try new grains, legumes, nuts, vegetables, and fruits that I had never ever heard of before.  Doing so resulted in a far more nutritionally well rounded diet than I had ever had in my entire life, even when meat was involved.

As my pallet for a variety of fresh foods increased, my taste and craving for much of the junk began to dissipate.  As the saying goes in the fitness world, food is fuel, and fueling your body with junk is not ideal.  As my diet began to clean up, it was more than noticeable in my training.  Not only have I been able to avoid getting sick for almost a year now, but my stomach issues have disappeared.  Because fruits and vegetables are often lower in calories, yet higher in fiber, I find myself eating more frequently throughout the day, and thus my metabolism and blood sugar issues, while not completely solved, are far more under control than they’ve ever been before.     In addition to no longer having those concerns to deal with while training, I personally have noticed increases in my strength, speed, and endurance, as well as a decrease in injury and recovery time.  All of which have allowed me to train harder, and become a stronger athlete.

Now of course it can be argued that these positive effects are not due to cutting meat out of my diet, but instead can be attributed to the fact that I have taken a more proactive approach to my diet.  I, however, take satisfaction in knowing that I am no longer consuming animal flesh that has possibly been contaminated with growth hormones, antibiotics, or even genetic modifications that could all have acute or even long term effects on my own health.  Further, research has shown that people who consume a vegetarian diet are at a lower risk for a number of health issues, such as obesity, cardiovascular disease, hypertension, type 2 diabetes, and cancer.  And of course, I rest easier at night knowing that I am no longer contributing to the senseless and inhumane practices of our meat industry.

Choosing to consume a vegetarian diet is a very personal issue, and may be done for ethical reasons or simply health benefits.  The bottom line is whether you consume meat or not, as an athlete, you should not only be avidly aware of what you foods you are putting into your body, but proactive in the choices that you make.   Physical fitness is only one component of our training; be sure that the fuel you put into your body is only helping you, not hurting you. 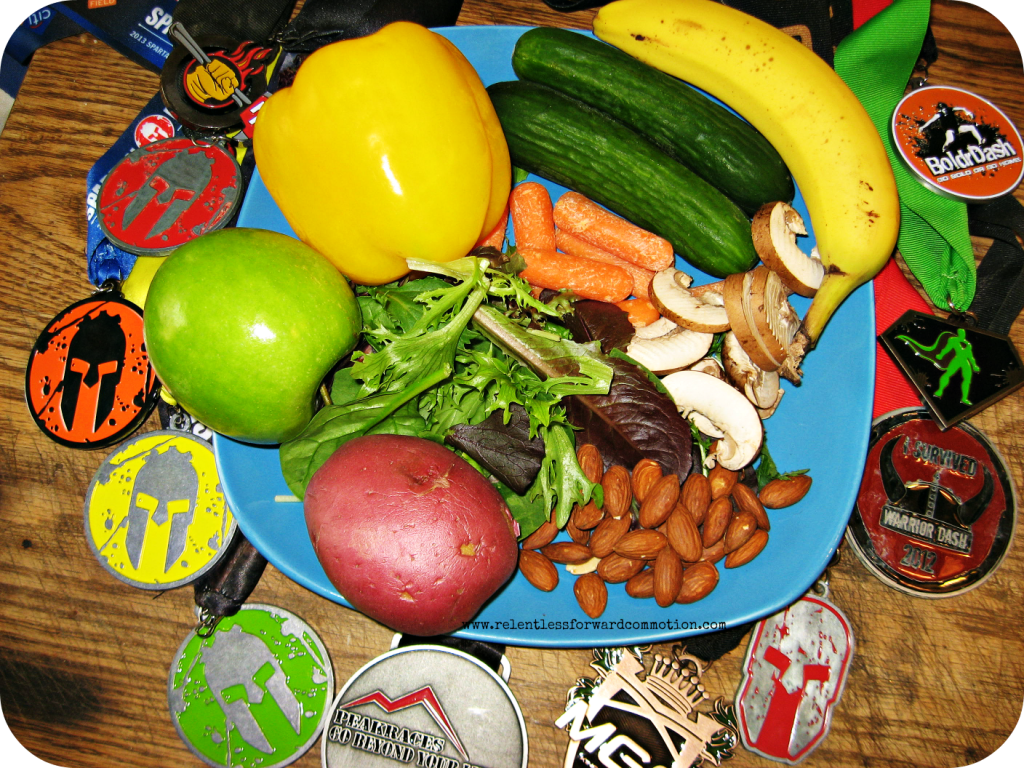