I have yet to blog about the adventures of almost two weeks ago as I ran around the magical world of Disney.  Though I am somewhat (OK, extremely) heartbroken that I was shot down in the very first round by the Disney Moms Panel for the runDisney spot (seriously, don’t they know that I am way too competitive for that kind of rejection? ), I can’t hold a grudge for too long when it comes to that Mouse and his race medals. 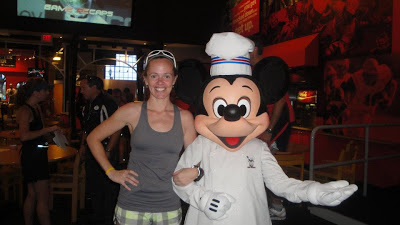 So as many of you know, my family took a trip to Walt Disney World during the last week of September.  On, oh, I’d say day #2, my sister Holly and I were driving to get some food when I read an email on my phone from the almighty runDisney PR guy-in-charge himself, Bob Hitchcock. I was informed that the Wine and Dine half marathon weekend Meet-up and Eat-up special event that I found out about, oh, 5 hours after it was opened for RSVP’s (and full about 2 minutes after) a week earlier, but I emailed with my info anyway, complete with a prayer and some pixie dust, had a cancellation, and I was in (did you follow that run-on sentence?).  Holly laughed as I jumped up and down in the car. I was SO EXCITED.

So 5 days in the happiest place on earth passed and Friday morning I met up BRIGHT and EARLY with a bunch of other runDisney fans at the ESPN Wide World of Sports Complex (after getting thoroughly lost trying to drive there, haha) After a brief intro from Bob, we were whisked away on golf carts to the track for the beginning of our session. 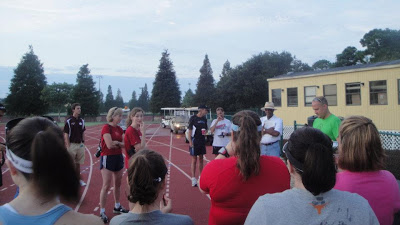 To start, we met Olympic Track and Field coach Brooks Johnson.  This guy was a trip.  Super funny, and incredibly knowledgeable.  It is very interesting for me to to listen to the pros in this field, as often times things I’ve been taught seem to contradict the things that seem to actually work.  Not so much the case with Mr. Johnson, however, as he handed out multiple pages of notes to all of us on the biomechanics of running. I was in Exercise Science nerd heaven.  And the highlight, for me, was Mr. Johnson’s firm stance on the fact that strong feet create a strong body, and that all of these over cushioned, over supportive shoes on the market these days are the root of all running pain evil. I couldn’t agree more. 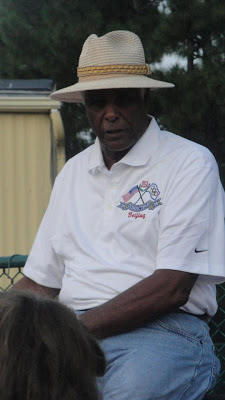 He next stood us up and put us through a few different drills on the track, demonstrating how things such as arm movement could have a significant impact on our speed and technique.  I felt like I was in high school track again, and could almost hear Coach Perry in my ear yelling “Heathaahhh, relax your shouldaahs!”  (any HHS alum out there?) but instead I got an “excellent form” rating from Coach Brooks. Wooo! 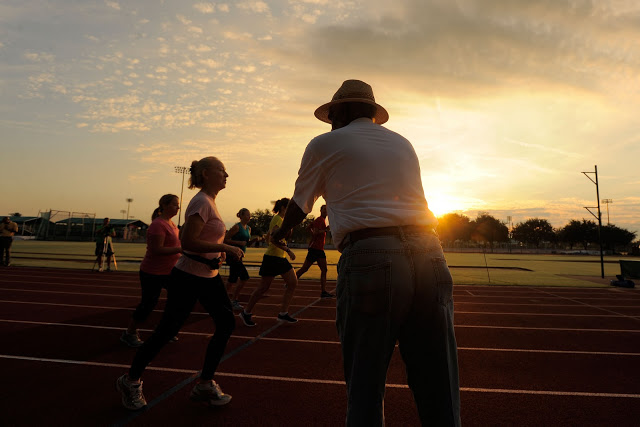 Next up, we met the 2010 Wine and Dine half marathon women’s and men’s overall winners, Melissa Wisner and Anton Van Zyl.  They were really down to earth which was really great to see. Not that they wouldn’t be, but I know I tend to hold these super fast runners up on a pedestal sometimes.  When in reality, they are just your average Joes….with darn good genetics and training discipline. 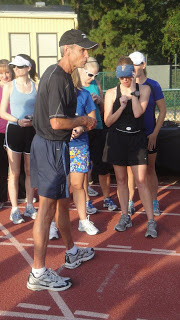 And then, came my friend and yours, Jeff Galloway, runDisney’s official training consultant.  If you’ve been around here for a while, you know that way back, I denounced the Galloway method for my own training, because a walk break messes with my head.  But besides my own insanity, I’ve got to say, Jeff Galloway is fantastic. Not only does he clearly know what he is talking about, but he is one of the most supportive, genuinely nicest guys I have ever met.   This was my third Mr. Galloway meeting, and each time he is as friendly as the time before. Anyway, he spent some time talking to us about training, a lot about eating before a night race (apparently the 2010 race was a bit of a barf-fest, lots of people are unaccustomed to racing at night), and answered questions.

And then…we ran.   And as much as I do love Jeff Galloway, I couldn’t do the Galloway method that day (or, as DisneyDeborah says, I couldn’t “Jeff”.  It’s a verb.  As in, I Jeffed, he was Jeffing, let’s Jeff together.)  So instead, I chose to run the just shy of 2 mile trail run behind the ESPN WWS complex with Melissa Wisner and Anton Van Zyl, (and race director Jon Hughes)  and prayed they weren’t going to run at race winning speeds.  Luckily they did not, and instead, provided great conversation and company!

Last but not least, we were brought indoors for some nutrition and cooking tips from the always awesome Disney Chef (and Ironman) Gary Jones.

If you remember, Chef Gary was kind enough to let me attempt to ruin our snack during the princess half marathon meetup (I’m horrible in the kitchen) and called me up for a repeat offense, haha!   This morning, we were making quinoa bircheruesli (don’t worry, I can’t pronounce it either, but I assure you it’s delicious…see recipe at the very bottom of this post) and I was in charge of apple and pear grating once again.  Once again, with Chef Gary’s supervision, I managed to not destroy the dish.

After the cooking was finished, everyone enjoyed the snacks that I slaved over cooking for them (I kid, I kid), while we were given a little insider info on the future of runDisney.  Apparently, while nothing is set in stone, there are ideas of an international runDisney event coming in the future. I don’t know about you, but that makes me want to get my passport, ASAP.
We posed for pictures, were given an AWESOME goody bag full of fun stuff, and snuck into the expo EARLY (amidst the glare of those standing in the incredibly long line waiting for the expo to open…I really did feel bad for skipping to the front!) to pick up our packets for the races that weekend (5k & half marathon for me)

It was a wonderful, informative morning hosted by runDisney.  What I just LOVE about their events is that they really, genuinely do care about their runners and their fans, and they clearly have SO much more to offer than your typical race venue.   And that is just one of the many reasons I will keep going back (among amazing bling and hugs from Mickey).  Thank you, runDisney, for a fantastic start to another MAGICAL race weekend I will never forget! (race recaps will be posted ASAP!)

Method of Preparation:
1.   Place the cooked quinoa into a 2 qt. bowl.
2.   Add the dried cranberries and the chopped nuts.  Mix.
3.   Squeeze and juice the lemon into the bowl and mix.
4.   Shred the apples and pear and stir into the mixture.
5.   Add the brown sugar and mix.
6.   Taste and adjust to your own preference.