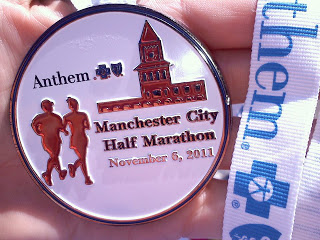 Well, I had heard a rumor or two that this was a hilly course.  I would beg to differ.  The course isn’t hilly…the course IS a HILL!

Saturday my mom, the tots, and I headed over to Manchester to the expo/packet pickup and to figure out where I was supposed to be early Sunday morning.  The expo was small but nice.  I found a few more local races I hope to run. The awesome volunteers at packet pickup gave my boys toy footballs.  They also scored some Cabot cheese and Stonyfield farm yogurt, so they were happy little guys.   I was given a packet with a long sleeve tech tee, gym towel, cowbell, and all of the important information regarding race day in a backpack. 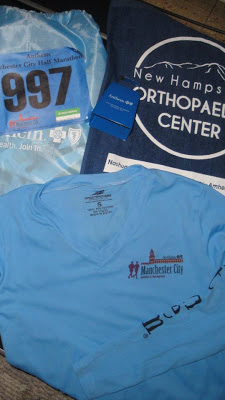 Let me just go ahead and air my one and only (slight) grievance with this race right now:  I understand the importance of sponsorship, really I do.  But the “Anthem” logo over EVERYTHING drowned out the actual race logo.  This goes for the shirt, the medal…the backpack doesn’t even mention the race.  I realize to most, this is an absolutely trivial fact.  The race course, the volunteers, the support, those are all things that make or break a race.  I race for plenty of reasons, but we all know I enjoy the shwag and am in LOVE with my medal collection, so these sorts of details are important to me.  Of course I’m not saying take away the sponsor logo….just make it a little less…obnoxious.  I realize that makes me sound like a total shwag snob.  My apologies!

Sunday morning, my awesome little sister volunteered to come to the race to cheer me on. I was stoked because a) it was freezing and b) she hates running (hates it so much my older sister and I have suckered her into 4 half marathons before…here’s hoping one day we will bring her over to the dark side and she’ll enter a race without sibling pressure!).   Our drive was totally uneventful (101 East in NH is beautiful this time of year though!) and I was SHOCKED that we drove directly up and into the parking garage half a block from the start/finish line.  AND parked in the first row.  There is something to be said for smaller races! (I heard somewhere about 1,400 between the half and full marathon, that’s not an official count though)

It was COLD that morning. I was shaking in my bridesmaid outfit.  Wait what?  Wedding?  Yes, my friends Shawn and Ron were married the same day at the Battleship half marathon in Wilmington NC at mile 3 DURING the race.  How amazing is that? The same race Ron proposed to Shawn at just last year.  I was honored to be invited to be a part of the running bridal party. However, the events as of recent that brought me all the way to NH, prevented me from getting back down to NC.  But I wasn’t going to let that ruin my support for the amazing couple.

So as I was saying, it was FREEZING. I couldn’t tell you how cold, because I didn’t want to scare myself by looking at the thermometer. Lets just say, at one point in the race, a volunteer with a bright orange flag was warning us to be careful on the ice.  Eek.  I shivered while consuming the rest of my pre-race breakfast. A meal I am too ashamed to share with you , but let’s just say, I bought it at a gas station. Nothing but high fructose corn syrup and chemicals my friends. I do *not* recommend this strategy.

Next we met up with some dailymile/twitter pals. Have I mentioned how much I LOVE the running community?  There’s always a friend to be found at a race.  And these new friends were awesome!

Alright, now to the race details.    Here’s what you need to know:

Hills. Lots and LOTS of HILLS.  I had heard from fellow tweeter  @iRunNewEnglad, who had driven the course the night before, that the first 8 miles were basically uphill.  But, I’m not sure I was prepared for how constant the hills were. They just kept coming and coming.  You’d get to the top of one hill, take a 90 degree turn and bam, more uphill. It was insane.

The good news is, long ago, someone taught me how to properly run downhill. I can’t for the life of me remember who, but I think it was before I ran Umstead.  The worst thing you can do when running down hill is to take little steps, to lean back to try and compensate for the hill, or to tense up. Nope, you need to take full advantage of the hills and just fly down them. I’m talking, a free fall where one misstep could cause an immediate face plant into the pavement.  I have long legs, so the downhills really work in my favor.  Every downhill for me was an opportunity to run a sub 8:00 pace while dropping my heart way down really low as if I was walking. And that in turn, gave me the momentum, and rest, to make it back up the hills again.

So anyway, the first 3 or 4 miles I took relatively easy. I had NO goals for this race other than to finish. No attempts at a PR, no time goals. And as a result, I hardly ever looked at my Garmin.

The race started in downtown, and within a mile or two ended up in residential areas.  Manchester NH, I give you many kudos. I was AMAZED at how much neighborhood crowd support there was at this race. I’ve run races 5 times this size and still haven’t seen as many spectators cheering the runners on.   People were camped out at the end of their driveways, some even having what looked like breakfast parties, with music, signs, cowbells, the works. It was truly awesome

Mile 5.6-6.2 was a wide trail. It was a great way to split up the middle of the race. Though it only lasted a half a mile, I loved it.  And when you left the woods, you crossed a wooden bridge into a SEA of spectators. I mean, it was an instant roar of a crowd, it was unreal. That must be what it feels like to be Kim Kardashian leaving Starbucks or something. OK horrible comparison, but you get what I’m saying. Peaceful forest and then instant crowd chaos.  It put a smile on my face for sure.

The worst of the hills for me seemed to be mile 7-8.  Perhaps this is because I knew in the back of my head that there would be some relief (turns out, only some) from the hills after mile 8.  This was also around the time my poor “I’ve run at sea level, flat, Myrtle Beach for the last 5 years” quadriceps started screaming at me.  3 miles out, I realized that even though I had been taking it easy, I was going to probably break 2 hours as long as I didn’t stop running.   There was one last big climb as we neared the 12 mile marker.

Then the coolest thing happened. We round the top of the last hill to see, I kid you not, a straight one mile downhill into the city and the finish line. I mean, who doesn’t love that?  But the coolest part for me, was the lady I stumbled upon at that moment.  As we neared that view, and the 12 mile marker clock showing a time of 1:48:xx, this lady screamed “I’m going to make it!!!!” and put her hands over her face as she started crying tears of joy. I’m not sure if this was an “I’m going to make it” as in her first half marathon ever, or an “I’m going to make it!” sub 2 hours. Either way, I just felt SO HAPPY for her.  This is part of why I love racing so much.

I booked the last mile in 7:52, the last 0.10 of a mile in 1:58 (7:47/mile pace). As I came around a corner to the last 100 or so yards before the finish line I saw my sister standing on the corner. I totally took her by surprise. I had told her to expect me somewhere around 2:15 as I really was expecting a slow, easy day, so needless to say, she didn’t have the camera ready 20 minutes early! 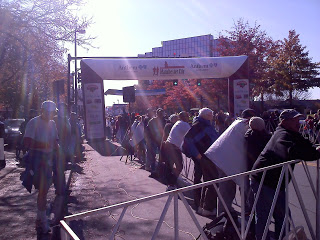 I crossed the finish line with a smile on my face, was handed a space blanket that the smiling volunteer told me was my “baked potato wrapper” and a medal.  Post race food included the usual: chips, granola bars, fruit, crackers… and the unusual: chili, warm bread, and some other HOT food that I wasn’t able to take inventory of.  Bonus points for you Manchester City Marathon! 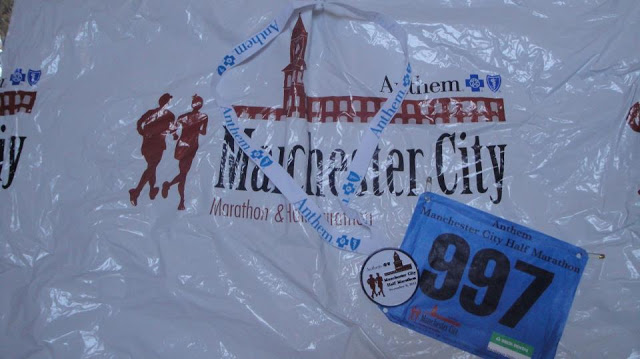 Looking back, I kick myself for not going all out from the start. I totally think I could have PR’d yesterday.  The conditions were perfect, my nutrition was spot on (hellloooo running buffet!) and I felt awesome.  But, rather have a good, non PR race, then burn out from the beginning if I were to have a bad day. Que sera sera!

All in all I’d give this race a 9 out of 10 rating.  The organization was flawless, especially considering this was only the 5th year of the race. The volunteers were amazing, always with a smile on their face.  The crowd & community support was like nothing I’ve ever seen, in all of the races I’ve run.   And those hills…they left me feeling that I’d tackled something more than “just another half marathon” that morning.

Oh, and rumor has it the race director called for that freak snowstorm for LAST weekend, and sunny without a cloud in the sky for race day….

If you want a challenge, I would absolutely recommend this race. I’ll see you there in 2012!