This weekend I had the honor to not only attend the inaugural Heartbreak Hill Half Marathon festival, but to do so at the invitation of Runner’s World for their blogger weekend.   And it was nothing short of amazing.

Following the same format of their event held in Bethleham, PA, the Heartbreak Hill Half festival is a weekend full of running & Runner’s World fun, including a kids race, a dog race, a 5K, a 10K, a half marathon, or even a combination of all of the above including the Five & Dime challenge (the 5 & 10K) and the Hat Trick (5K, 10K, & 1/2 marathon).  Peppered in between the running events is a great race expo, numerous presentations and guest speakers, and a pre race pasta dinner (whew!).  Because I have way too much to say about the weekend (no surprise there), my recap will be split into three separate posts: blogger weekend, the Five & Dime plus expo, and the Half Marathon. 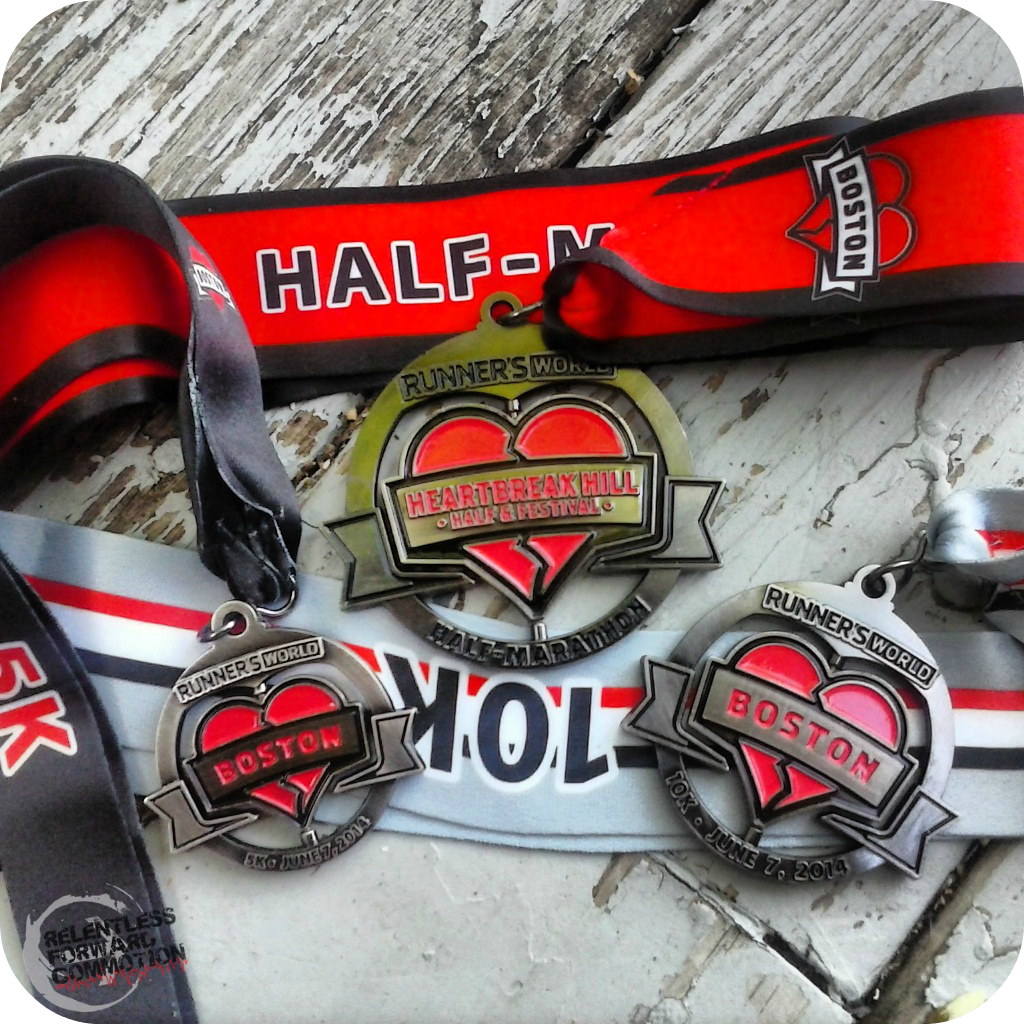 I arrived Thursday afternoon to the gorgeous Boston College campus and checked into my dorm room. Interesting accommodations indeed, but the college flashbacks were a small price to pay for staying onsite; the race expo and starting line were mere steps from my door.  There was no one in my dorm suite when I arrived, but I heard loud talking from just down the hall, so I entered a room that wasn’t mine timidly saying “Hello…bloggers?” (Note: this may have been my only timid moment of the weekend, as photographic evidence will prove. I have no idea when I turned into such a ham…a loud one at that.) I immediately saw a familiar face: it was Katy Widrick ready with a big hug.  With her were a bunch of bloggers I had never met before, but I would come to love before too long.

The weekend had officially started.

Katy, Presley from Run Pretty,  Amanda from Run to the Finish, and I headed down to the T to take the green line into dinner. We marveled at the fact that there were quite literally stops every 200 yards.  Apparently walking isn’t popular in Boston?   Eventually we arrived at some mysterious station underground, made our way to the Freedom Trail, made a pit stop at a Rite Aid for some soap, and eventually arrived at West End Johnnies for dinner.   (Note: this was excellent “Amazing Race” training for Presley and I.  Auditions TBD.)  Here we met up with the rest of our fellow bloggers, and some of our awesome Runner’s World hosts and hostesses.

We were fed an amazing dinner, and then treated to popcorn, candy, and a screening of Saucony’s documentary “Finding Strong”, an independent film documentary that captures the transformative power of running.  Produced by Saucony, in collaboration with Runner’s World, Finding Strong takes viewers on a global journey to spotlight how the simple act of running can create and empower communities.   You can watch the 22 minute film on your computer HERE.  FYI: a race on Mt. Fuji has just been added to my “bucket” list. 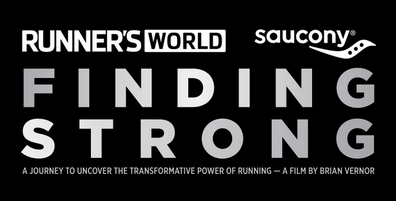 After heading back to our dorms, a handful of us decided to take a bit of an adventure around Newton and through the Boston College campus.  The adventure included many geese, a busted fence, locking myself out of my room and a bunch of well-over legal drinking age adults worried that the RA was going to bust us for the 6 pack of beer we brought back to the dorm lounge.  Some things never change. 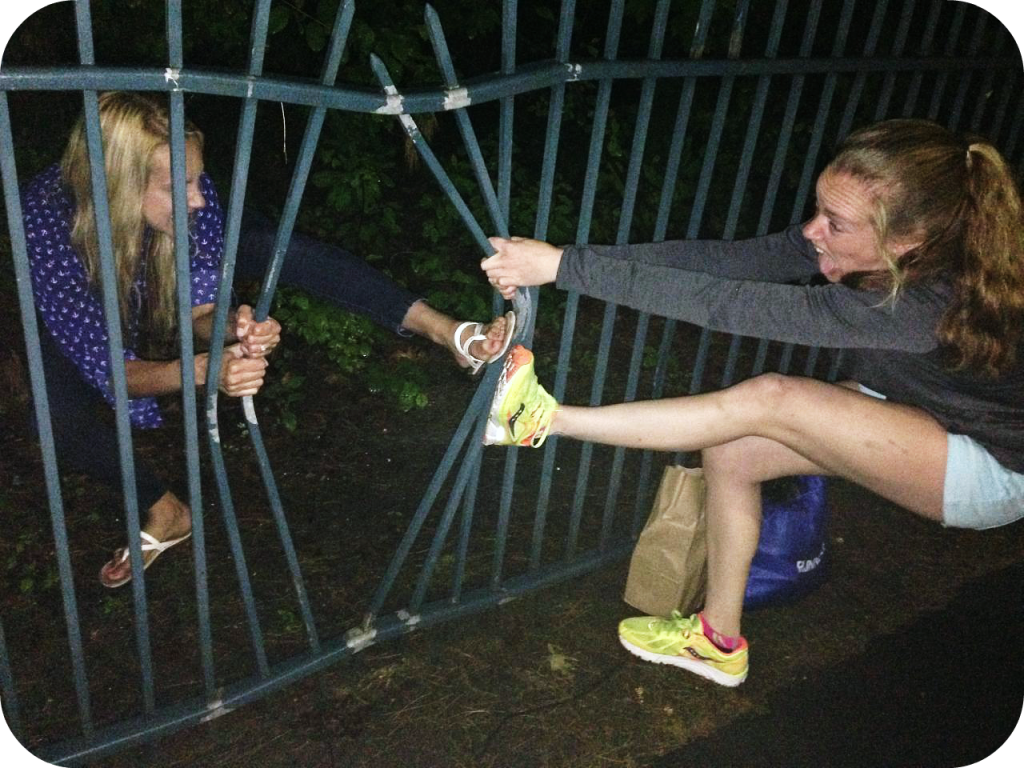 I’ll save you Presley!!

The next morning we were all up bright and early for a workout with November Project. Incase you haven’t heard of it before, November Project is a free fitness movement that was born in Boston as a way to stay in shape during cold New England months. Now present in multiple cities in across four North America, the movement is using a simple sense of accountability to motivate and encourage people of all ages, shapes, sizes and fitness levels to get out of their beds and get moving.  (Want to learn more? Read the Runner’s World article on the November Project.) We joined November Project for their hill running day, and it was unreal.  As we climbed off of our bus and started heading up the hill to meet the group, there were literally hundreds of people of all shapes and sizes heading up as well.

The group gathered at the top of the hill to whispered instruction from one of the founders, Brogan, who is incredibly motivating and loves to use the word “f*ck”.   We were in a residential neighborhood with a noise ordinance in place until 7:00 am, so we were told to kick ass…quietly.   Hugs to random strangers (that’s what you do at November Project) and we were off.  The workout consisted of a 0.75 mile downhill run  then back up again, take a right into the park, roll under or hop over a traffic fence, down a small hill, back up again…twice…and you’ve completed one loop.  The goal was to complete this circuit as many rounds as possible in the allotted time. I attacked the hill twice, walked once with the group, and adding in the first walk up to the start, I conquered the hill a total of 4 times. I would have loved to push harder, but knew it wasn’t a great idea considering I had not one, but three races to tackle that weekend.   It was an incredibly fun atmosphere and a brutal workout.  I’ve never gotten so many cheers, high fives, and hugs from complete strangers.  Thank you for a kickass morning, November Project! 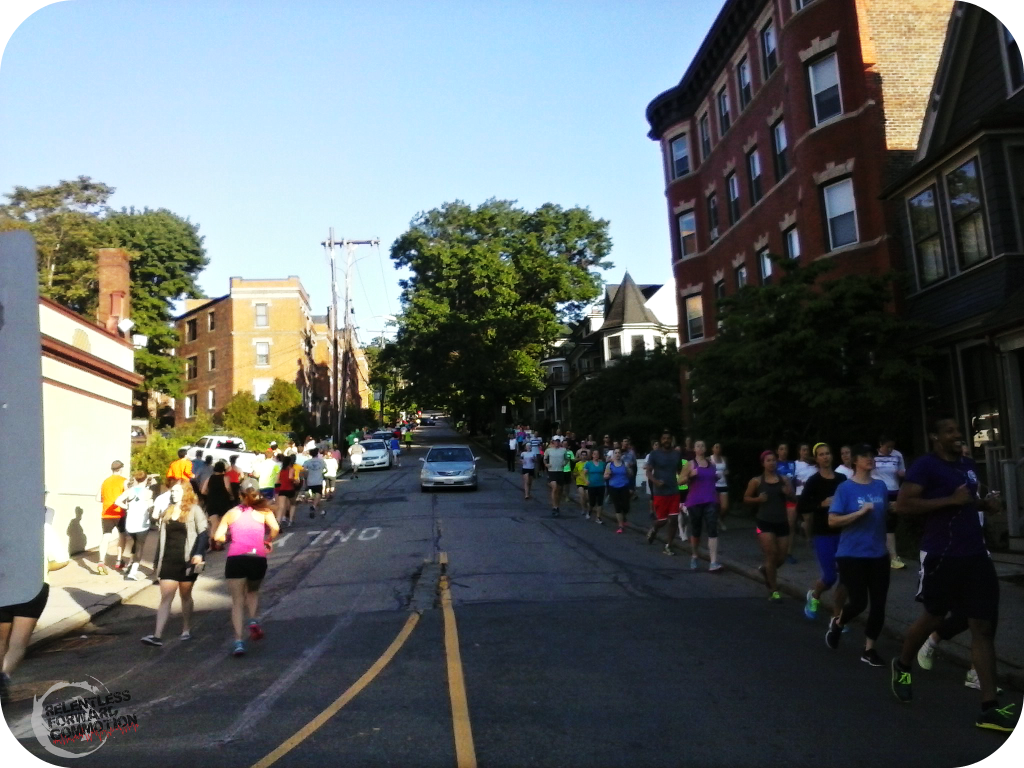 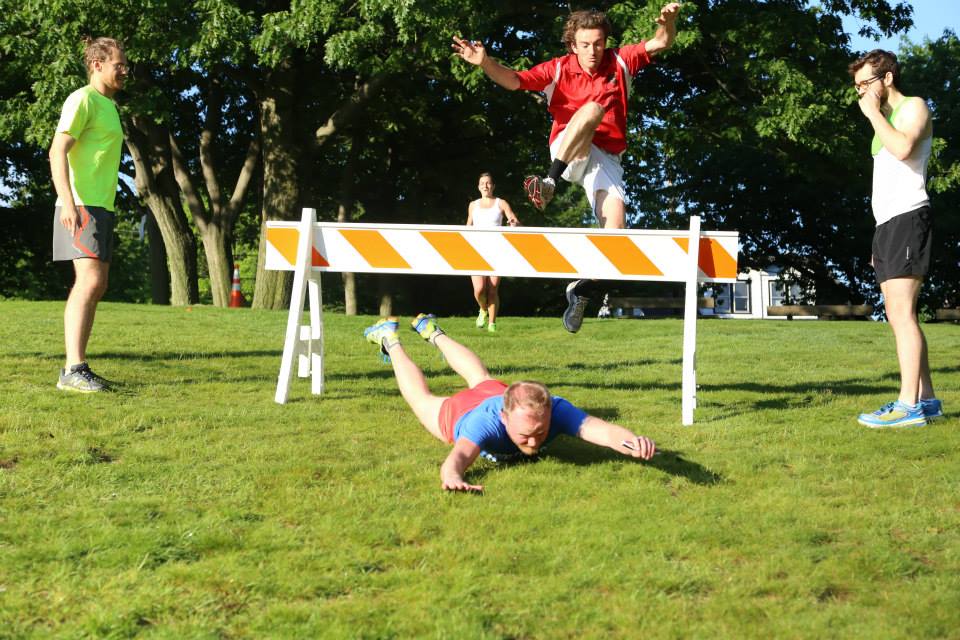 Over or under? photo credit: November Project 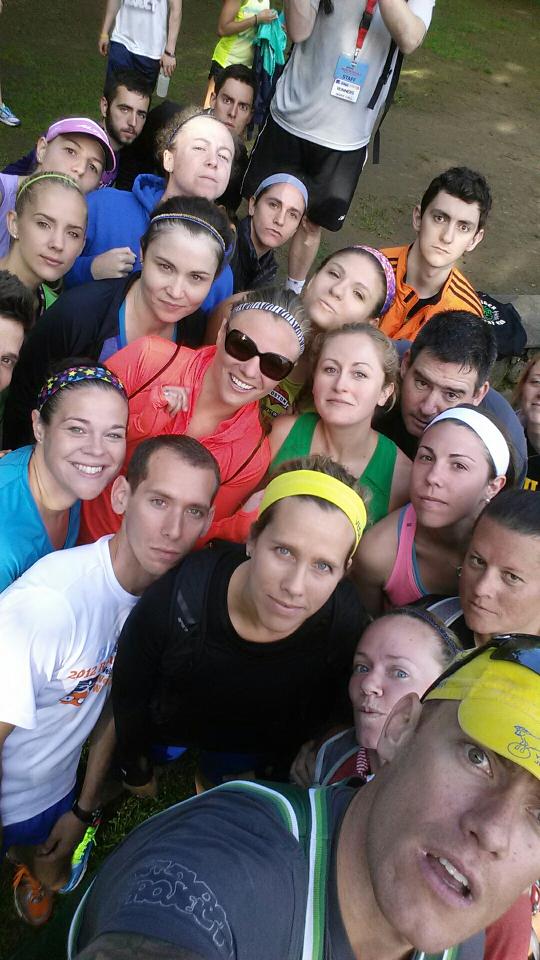 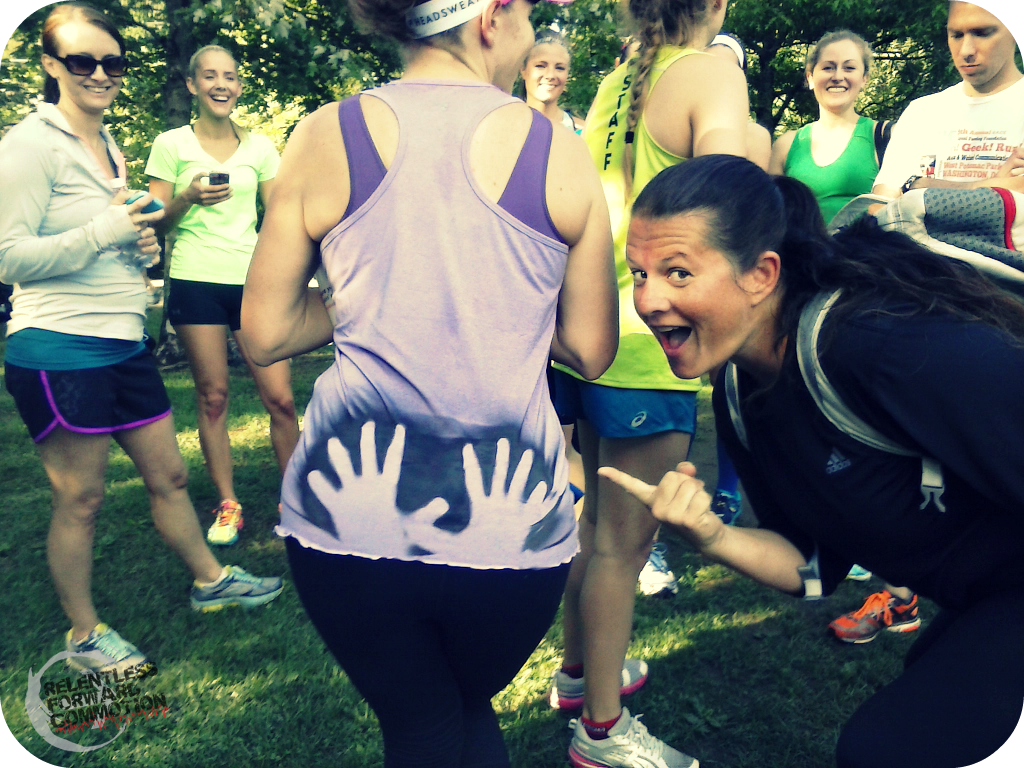 Want a November Project shirt? You’ve got to show up and earn your spray paint, as Katy and Larisa demonstrate.

After the workout we headed out for breakfast at a local favorite, Zaftigs.  Per usual, I didn’t take pictures of my food because I usually don’t hesitate to dive right in once the plate is put in front of me.  But I had an amazing omelet filled with Vermont cheddar and apples.  Perhaps I was subconsciously missing home.  Good food, lots of laughter, getting flak for having never seen the movie Frozen (am I seriously the only one?), and then we were off to shower and change before an afternoon full of events.

Next up was a meet and greet with two amazing athletes and women: Sarah Reinersten and Shalane Flanagan. Sarah Reinersten is a paraolympic athlete, triathlete, and the first female leg amputee to finish the Ironman World Championships in Kona, Hawaii. Sarah lost her leg at age 7 and has been running and inspiring almost ever since.  Her enthusiasm and spirit definitely makes you do a double take and think “what the hell are my excuses again?” And the goodness inside her is real:  one of our bloggers flew in to town and was handed a cardboard box at the airport that contained what was once her luggage…now in pieces.  Word on the street is that as soon as Sarah heard what happened, she gave the blogger HER luggage. It was truly an honor to meet her. 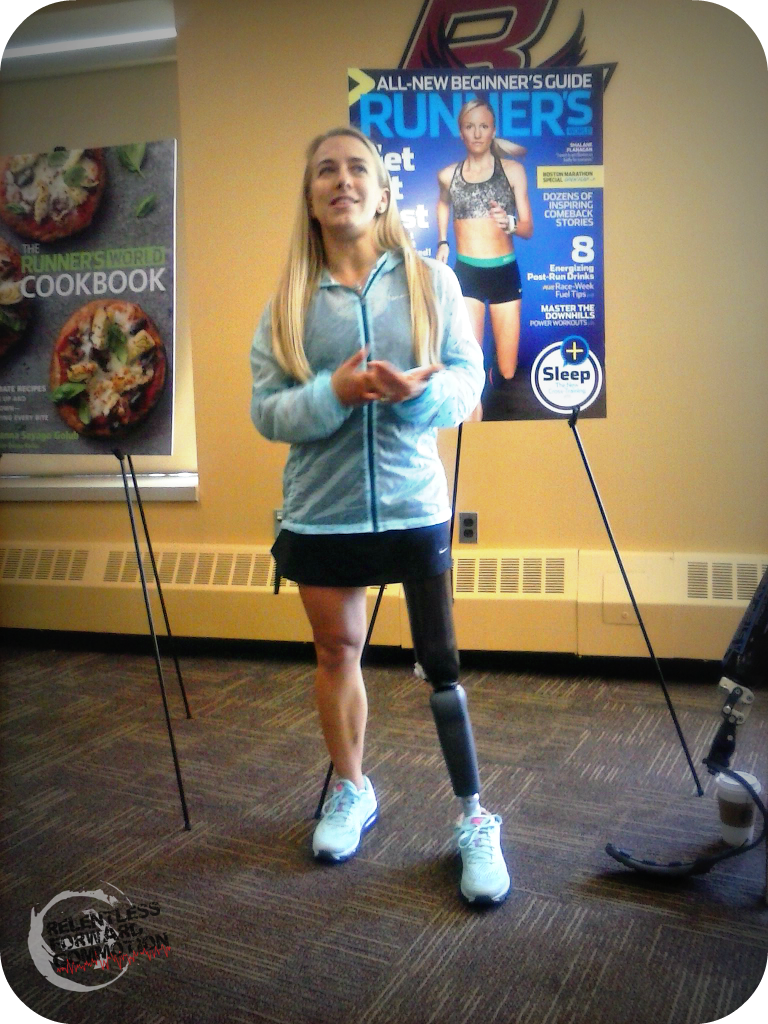 And then there was Shalane.   Shalane Flanagan is the current sweetheart of American distance running.  A bronze medal Olympian, she holds the American record times in the 3000 m (indoor), 5000 m (indoor), 10,000 m, and 15K road race, and is currently the 3rd fastest American woman for the marathon, with her recent PR at the 2014 Boston Marathon with a 2:22:02.  You know, no big deal.   She answered many “fan girl” questions from the bloggers, and totally won my heart by saying her favorite thing to do post marathon is grab a burger, french fries, and a beer.   Oh, and she humored me by cheesing in our photo when I told her serious shots were overrated. 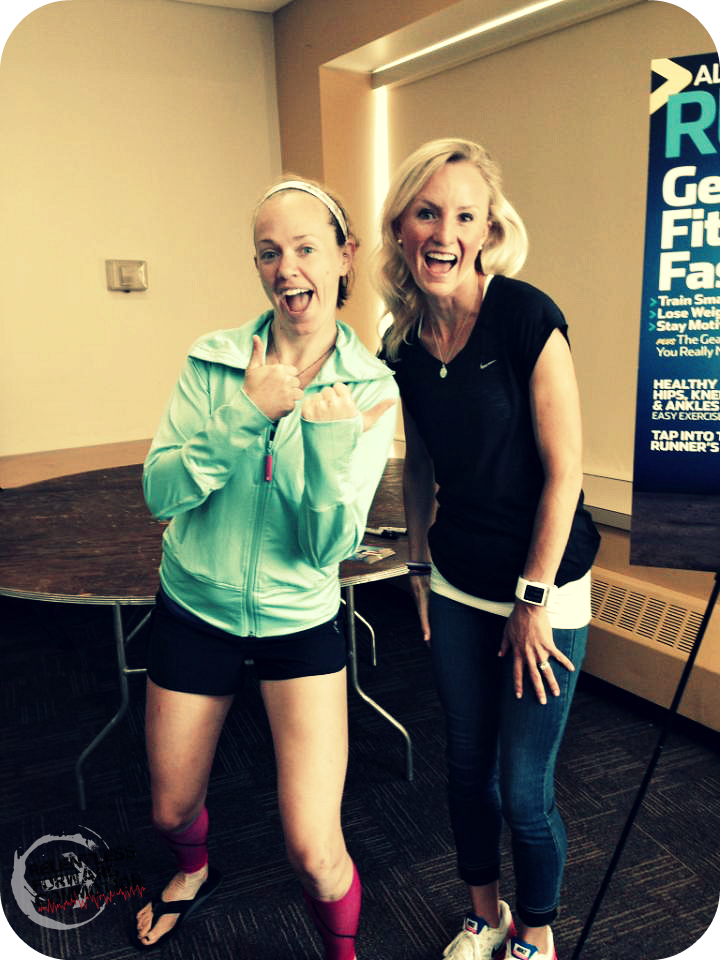 Me and Shalane Flanagan. Making Olympians uncomfortable is just one of my many talents.

In between the meet and greets was a fashion show with Running Skirts.  There are no words to describe said fashion show, so just watch this.   My abs still hurt from laughing so hard. Next came an amazing lunch once again from The Runner’s World Cookbook 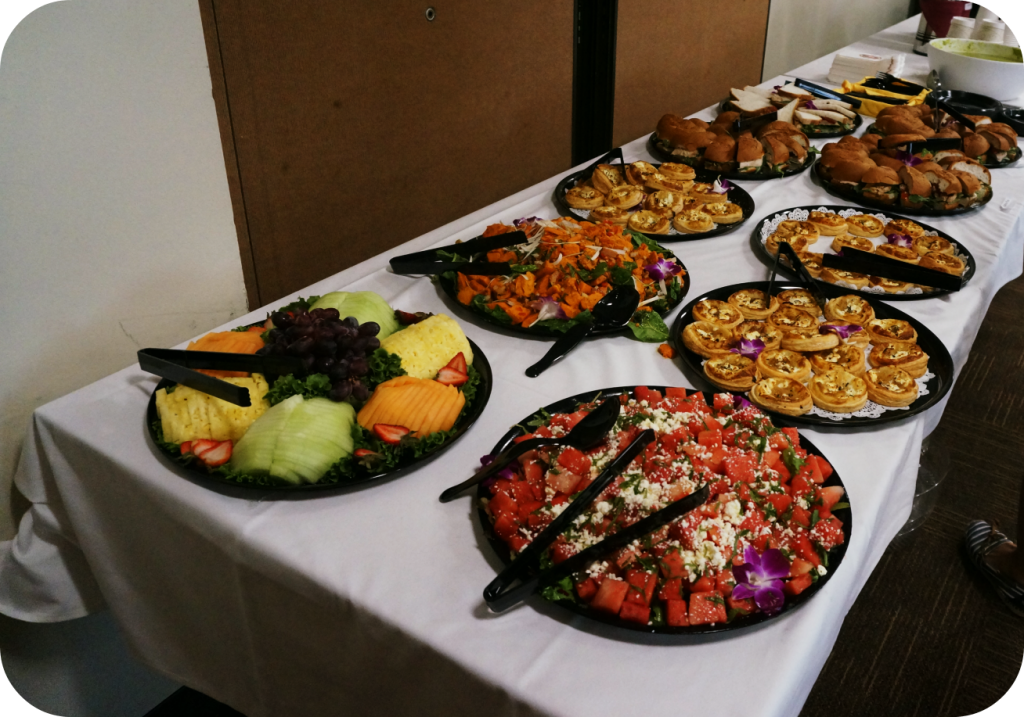 And following up lunch was a presentation from New Balance where we were shown their new line of Fresh Foam performance sneakers.  The concept was intriguing,  but the shoes felt pretty stiff, and looked pretty thick despite only a 4 mm heel to toe drop.  It is very interesting to see how the running shoe industry is changing daily; we have taken a quick turn away from the minimal boom of the last few years.  That said, I’ve never run in New Balance before, so I’m hoping to get my hands on a pair so I can truly review them.

At this point in the day I was just about as exhausted as you probably are reading about my weekend, so we headed to the expo and then settled in for the night.  More on the expo in the race review posts coming next. Once again, I cannot get over how lucky I have been to have such amazing opportunities come my way because of this blog, and this weekend was certainly no exception.   Though I’ll say it a hundred more times over the next few posts…thank you again Runner’s World for such a fantastic weekend!   Stay tuned for part 2 & 3!   Disclaimer: Runner’s World provided me with accommodations, race entry, and the blogger experience at no charge to me.  All opinions stated are my own.     * denotes affiliate link.