In case you are just tuning in, let me give you a brief recap: this past weekend I had the pleasure of attending the 2nd annual Runner’s World Half Festival in Bethlehem PA.  (links to the other posts of the weekend: Day 1, Day 2, Five & Dime recap)  The races offered over the course of the weekend, held at the Steel Stacks in Bethlehem, PA, include a kids race on Friday, a 5K, 10K, and dog run on Saturday, and a half marathon on Sunday.  In addition to the individual races, participants had the option to sign up for the “Five & Dime” challenge (running both the 5K &10K) or the “hat trick” challenge (the 5K, 10K, & half marathon).  I, of course, opted for the hat trick, because why run one race when you can run three, right? 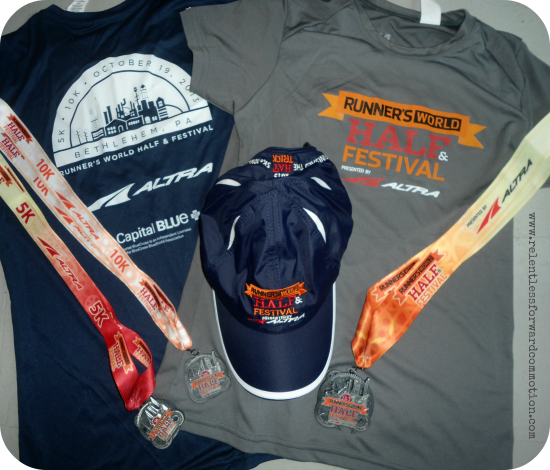 Now to catch up where we left off: Saturday night I slept better than I’ve slept in MONTHS.  Two tough races combined with a head cold will do that to you.  I woke up Sunday morning still feeling under the weather, but certainly not feeling any worse, and I felt incredibly rested.   I got dressed, packed my drop bag and spi-belt, headed to the hotel lobby for a hot cup of tea, and was on the first shuttle bus at 6:15 am.

Just like the 5K & 10K the day before, the finish line was at the Arts Quest center / Steel Stacks.  But for the half marathon, the start line was about a mile up the road.   We were told there were two bag checks available: one at the finish line (same location as yesterday) and one at the start line.   The start line bags would be shuttled to the finish line bag check, so you would be able to pick your stuff up after the race.   With this knowledge, the blogger group decided to hang out in the Arts Quest building (it was warm and had indoor bathrooms!) until about 7:30, then we would walk to the start for the 8:00 am race.

Now, here comes my ONE, SINGLE COMPLAINT about this race.  While the start line was about a mile away…the start line bag check was about another 1/2 – 3/4 of a mile BEYOND that…uphill (for what its worth)…with little direction or signage as to where that bag check was located.  This of course, resulted in much chaos and confusion. I was running around like an idiot, and long story short, made it into the starting corrals AS the countdown began. I was fumbling with my GPS,  trying to fix my ponytail, and trying to tie my shoes AS people were pushing towards the start line.   I will certainly take partial credit for only allowing myself 30 minutes to walk a mile, check my bags, and get settled into the start corral.  But with a field of about 3,200 racers, I didn’t think it was going to be that chaotic. I really don’t know what the logistics behind having the bag check so far away were, but my constructive criticism for 2014 would be to change that. 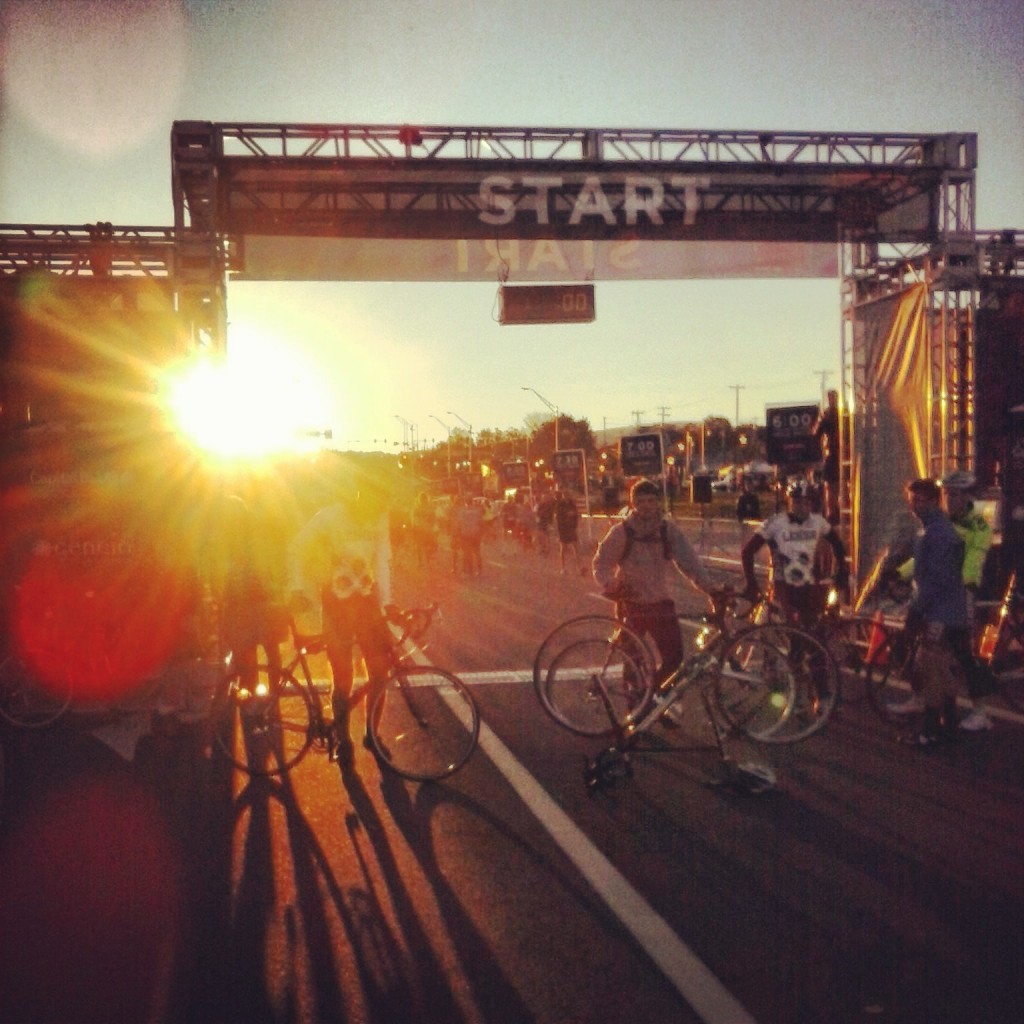 Moving on.  My current PR for the half marathon is a 1:40.  I knew that I wasn’t in that kind of racing shape coming into this weekend, as my fitness focus has been in the OCR world, and not fast(ish) distance racing.   Add to that the surprise cold, and I decided that finishing time wasn’t even going to be a consideration. I was just going to run and have a good time.

And that’s exactly what I did.

As I mentioned in the 5K & 10K report, I have never seen a course lined with so many spectators, short of the Marine Corps Marathon in D.C.  While this particular course wound through both downtown and residential areas, there were very few stretches where cheering spectators were not present.  It was so great to see countless people parked in lawn chairs at the end of their driveways, bundled up (it was in the mid 40’s) and cheering.

Also as mentioned previously, this course was HILLY.  I was surprised at how many hills there were, and though we started and finished in nearly the exact same location, I swear there were more uphills than downhills. I’m not sure how that is physically possible, but I’m pretty sure it happened.    I maintained around an easy 8:30 ish average for the first few miles….and then I saw this sign: 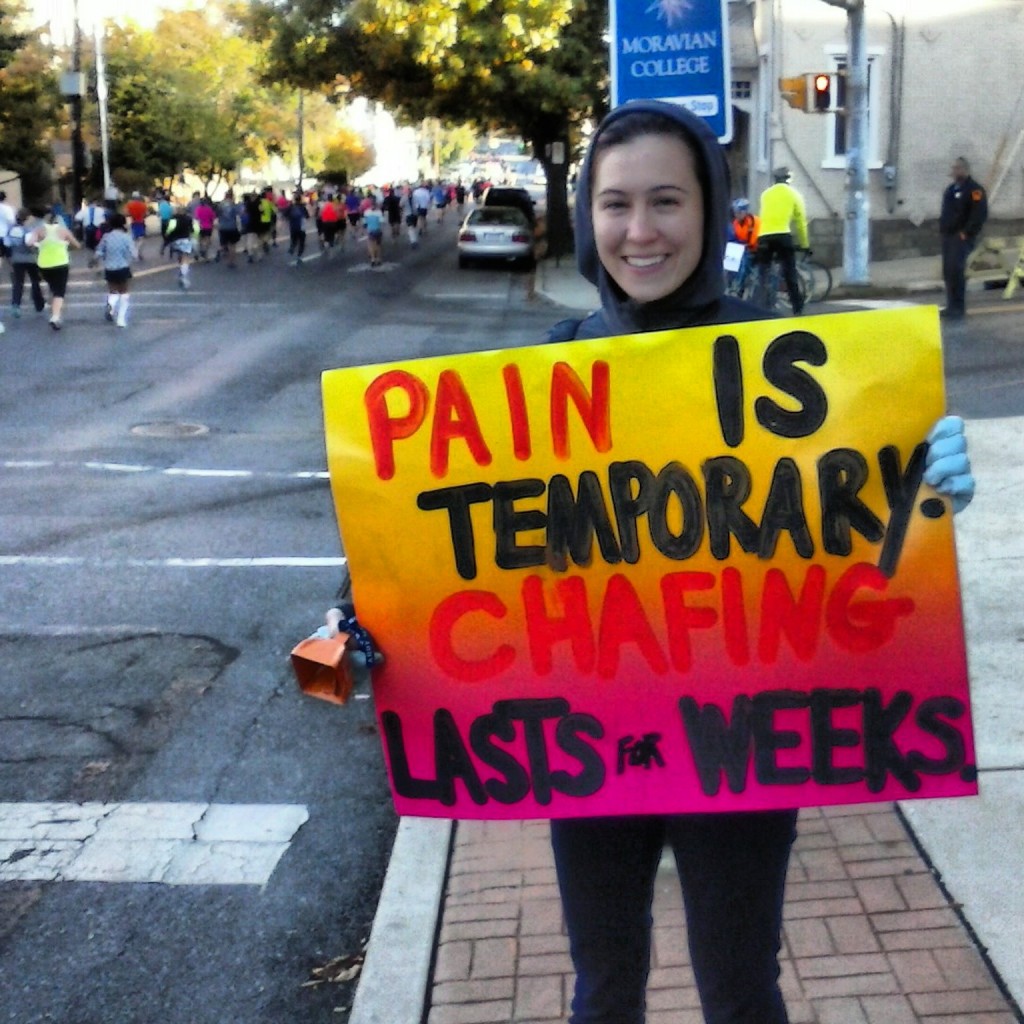 And I HAD to stop and take a picture, which reminded me of the twitter challenge/scavenger hunt we had been participating in all weekend. I had three posts left to go to complete the challenge, and I was still determined to win.  Crazy bloggers…”forget setting a PR, I’ve got a twitter challenge to win!”  So after I left this nice lady and her awesome sign behind, I ran to the next water stop and pulled over, for this photo counted as challenge #29: favorite photo of the weekend, and I had social media work to do.

Yes, I am somewhat ashamed to admit that I was THAT GIRL who stood on the side of the road with my face buried in a smart phone, while HUNDREDS of people ran by.  (Beachy, I totally sacrificed my race time for that challenge…do I get bonus points?).  About 5 minutes later,  I finished the challenge, tucked my phone back into my Spi-belt, and continued on my way.

A short distance later, we started climbing a pretty long hill.  As I approached the 3/4 mark, I looked up and realized it was one of those bastard tricky hills…you thought you were about to reach the top, except the road took a 90 degree left hand turn, then KEPT CLIMBING.   Once I took the turn, I started seeing a ton of pink, hilarious signs lining the street.  Things like “Got bunching and chaffing? Should have worn a skirt!”   And then at the top of the hill….this happened:

Running Skirts “Twerk for a Skirt”.  And incase you were wondering, YES, I absolutely did shake my booty for a free running skirt.  That’s me in the blue and yellow skirt at the 42 second mark.   This was such a hilarious water stop, and I was stoked to see how many MEN stopped to don a running skirt.  Watch out Miley.  Thank you, Running Skirts, for such an entertaining moment in my day, AND for the free skirt!

Onward and upward (literally, we kept climbing!).  Around mile 8 and 9 we passed through an amazingly beautiful neighborhood. Again, the streets were lined with people out in their driveways cheering. It was such a welcoming feeling, and another great reminder of the many reasons why I love running and racing so much.   Around this point, however, my feet began to rebel.   A combination of the 9 miles run the day before,  the fact that I’ve been running trails and avoiding pavement all summer, PLUS …I was wearing brand new shoes that I got the day before.  Yes, I realize this is probably the number one race sin, tied with trying new foods that day, but you know, do as I say not as I do.    Anyway, physically everything felt great other than the impact on my feet and lower legs…which ached in a way only distance running can do. 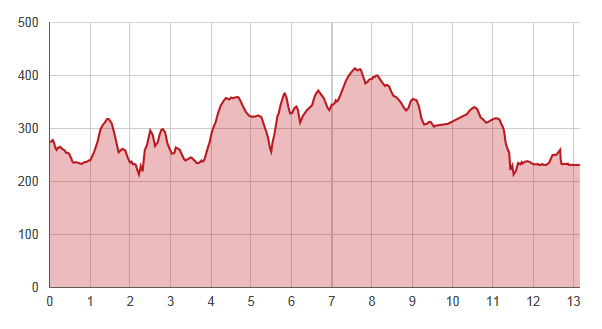 Half marathon elevation map. Not massive hills, just a lot of them…

And back into survival mode we (my legs and I) went.  Thankfully, the rest of the course was pretty much downhill (so they claim. My legs didn’t notice.).  I tried to maintain a decent pace but was really just hanging in there for the last 5k.  Once we reached the bridge, I knew we would finish the last 2.5 ish miles of the course the exact same way the 5K and the 10K finished.  Sometimes, familiarity frustrates me, I don’t want to know exactly how much longer I have to go in such a visual, relatable way.  But this time, I appreciated it. I knew this meant we only had one last hill to climb, and also that there would be hundreds of spectators lining the course. 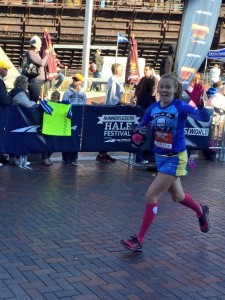 rocking the skirt I picked up at the 6 mile marker

The last 2/10ths of a mile of the course is a straight chute between the Steel Stacks and the Arts Quest building. It is awesome, as the spectators, music, and announcer are loud, providing a totally motivating atmosphere.  Unlike the day before, however, there was a killer headwind that just came barreling through the chute, which was so defeating when you can SEE the finish line, only yards away.

Hat trick: Done.  22.4 miles over three races in three days.   And a lot of great hardware to show for it. 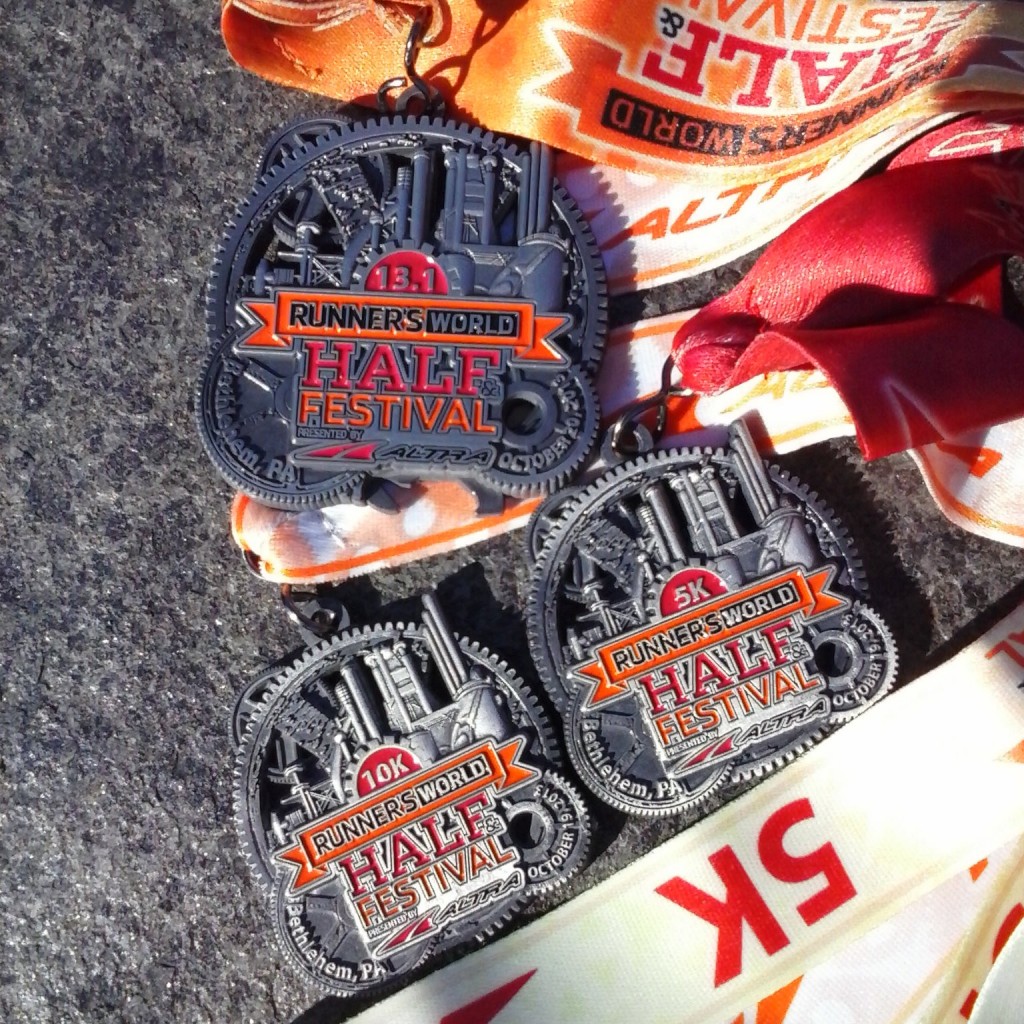 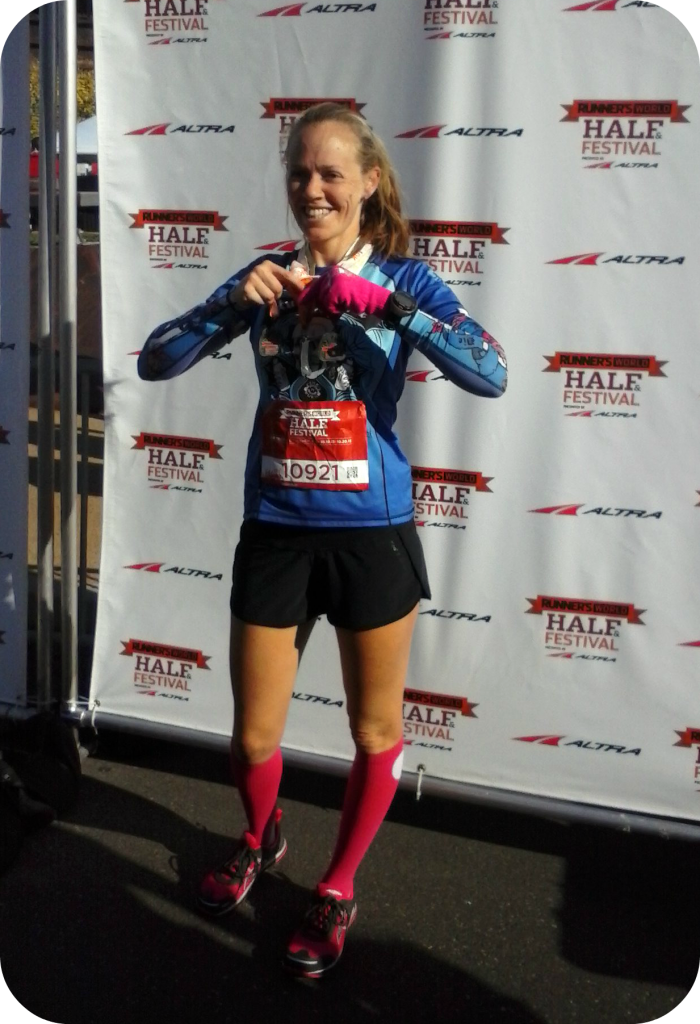 I actually ran with my 5K & 10K medals in my spi-belt so I could pose for this photo. #lame 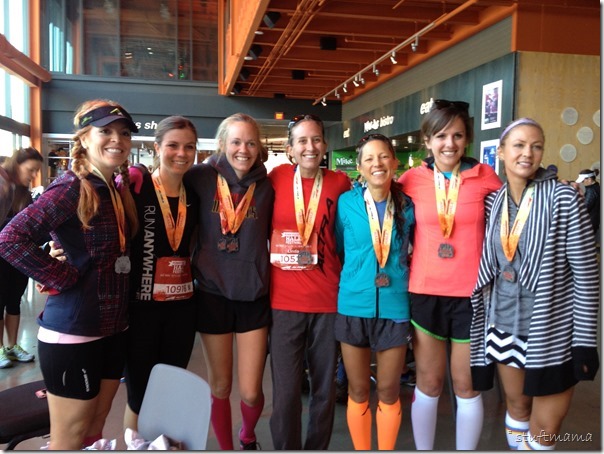 From a completely non biased standpoint : this race was incredibly well executed.  The course was scenic, slightly difficult but certainly doable, even for beginners.   The all around energy was fantastic, from the spectators lining the streets to the Runner’s World staff and editors ON the course, running with participants and cheering them on.  The swag: a shirt for 10K & 5k (gender specific fits!) , a shirt for half marathon, “Hat Trick” hat and three medals) was well worth the extra challenge.   Plenty of finish line food and drinks, easy access to bag check, and again, a WARM BUILDING to visit/use indoor bathrooms.   Warm shelter and plenty of bathrooms are priceless, in my opinion!  Other than the start line bag check snafu, I have zero complaints, or even constructive criticism to provide.  Great job, Runner’s World, you have my seal of approval.

ON A PERSONAL NOTE:

I can’t even begin to thank Runner’s World, and all of our sponsors that contributed to this weekend, enough.  I am absolutely honored and grateful to have been included in such a fun and fantastic opportunity. What’s more, I thank all of YOU, my readers, for your support, because without you, none of these opportunities would exist for me.

I truly enjoyed every second of this race, and am even MORE excited to have learned that this same format race will be held in BOSTON in 2014: the Runner’s World Heartbreak Hill Half.  You can bet that I will be there, and I’m bringing all of the family and friends I can convince to join me!

Disclaimer: Runner’s World paid for me to attend this event.  However, all opinions expressed are my own.

Have you ever run back to back races?
Do you enjoy the challenge, or prefer to focus on training for one event at a time?