Haha ok, now the Biggest Loser fans are going to have that stuck in their head for the rest of the morning. My apologies.

We all have our opinions on the show, from fantastic and motivating, to frivolous and completely unrealistic. I myself have ranted on this very blog about Jillian Michaels and her diet pills, er, I mean “supplements” (eyeball roll). I’ve heard others complain about how outrageous their thousands of dollars per week fitness retreat is, or how losing 10+ lbs a week is a horrible idea to put in the average at home weight loss hopefuls mind.

Yesterday, I was able to first hand personally witness both sides of the spectrum. As a volunteer at the first ever “The Biggest Loser 5k/1 mile challenge” here in Myrtle Beach, I got to see the reality of what “The Biggest Loser” truly is. I got to see the off camera version of these motivating people (they seemed very quiet and tired behind the scenes). I got to see that the final cut of these TV shows that make me shed happy tears, are actually made up of multiple takes and are very staged. (When Bob’s first “welcome to the race” speech didn’t generate enough crowd activity, we were instructed to do it again. And cheer much louder).

And then, I saw things like this. Standing near the finish line performing one of my volunteer duties, I watched this woman, Holly Oltroggee, finish her first ever 1 mile race. It took her 55 minutes. Almost an hour, to cover a distance most of us here in the running world wouldn’t even bat an eyelash at. She crossed the finish line, hands raised in the air, drenched in sweat and crying happy tears. And as the cameras swarmed her and Bob Harper put a finishers medal around her neck, I got tears in my own eyes. 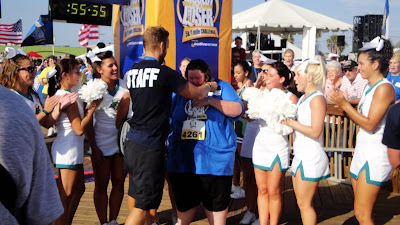 THIS is what it’s all about. Reality TV is often far from “real”, but what IS real is that obesity and inactivity plauges our nation. And at the end of the day, this is what matters the most to me about this show. That it can inspire people to believe that they can too change their lives like the contestants on the show, if only they believe in themselves and take that first step. Each of us are in charge of our own destiny. You want something? Go out and get it. The show inspired people like Holly to take that step yesterday. Holly’s struggles and accomplishments are very, very real.

And she wasn’t the only one.

Going into this I thought that the “reward” for me volunteering was getting a chance to meet Bob Harper and former contestants of the Biggest Loser. And as luck turned out, I was chosen as on of Bob’s handlers/escorts to keep away the hoards of people wanting to take photos and what not with him, when we had an agenda to stick to. But meeting Bob, Ali Vincent, Sherry Johnston, Pete Thomas, producer J.D. Roth, and a few others (I’m really bad with names and anything pre season 8) was far from the highlight of my weekend.

No, the best parts started Friday night. As I volunteered at the packet pickup to do late registrations, I had the opportunity to help people fill out their very first ever race registration form. I had the opportunity to ask people “what distance do you want, the 1 mile or the 5k?” and then as they looked at me , questioning what they were capable of, I convinced them they could run or walk the 5k. I PROMISED them they were capable of it, and I saw the glimmer of excitement in their eyes, as they began to believe it too. I got the pleasure of showing someone where to put their very first race bib on their shirt, and how exactly a D-tag timing chip worked (I’m pretty sure I was giving that speech in my sleep that night.)

I registered children as young as 4 years old, adults needing a T-shirt size of 5x (and even that was snug), and everyone in between. I saw a few Ironmen (that M-Dot tattoo gives it away every time). I saw grandmothers. I heard stories of those who had been wheel chair bound due to accidents just 6 months ago, now walking and ready to race. Cancer survivors. Brand new mothers with itty bitty babies in the strollers. All of these people, from all different backgrounds coming together to get moving.

The motto of the race was “Don’t Compete, Just Complete”, and that motto held strong throughout the next day. And while many were there to catch a glimpse, high five, photo, or autograph from Bob and the gang, they were all doing something so much more important, knowingly or not. They were being active. More than 2,600 people were MOVING . They were setting good examples for those brand new babies, or showing that cancer or car accident who is boss.

And as I watched time and time again people crossing that finish line, completely out of breath, sometimes crying, sometimes looking like they were going to puke or pass out, sometimes throwing their hands in the air out of victory, I said a little prayer for them. I prayed that this event was the first steps to a new lifestyle . A healthy lifestyle. One that will change their lives forever. And if the Biggest Loser, in all of it’s Hollywood-money-making glory is responsible for that…the spark that lit the proverbial fire under someones butt? Then a million kudos to them. We need more people, more shows, more influences in our modern society like you.

Congrats Holly O, you are an inspiration to many!

Ok and now for the nitty gritty details I’m sure you’re dying to hear: Yes, I met Bob, haha. I was actually assigned, with my kick butt friend/fellow running mama/awesome professor (and I’m not just saying that for a good grade) Christine to be Bob’s “handlers”. We were brought to the VIP tent to meet him before hand, and then basically, well, stood around. 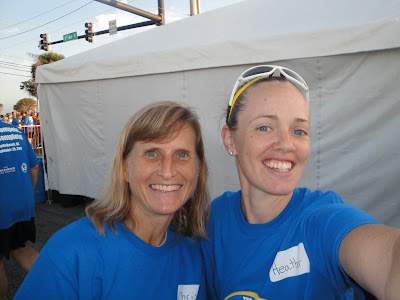 Our job was to walk with him and the production crew to the start, and then again at the finish line, to keep people from mobbing him for photos. They had a special to film and a race to start, so we were told to tell the adoring fans they could meet him post race. 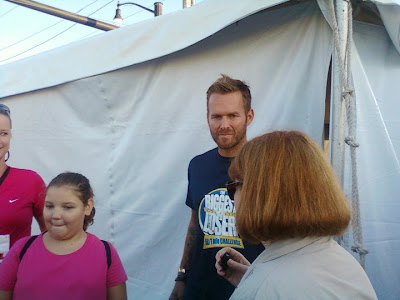 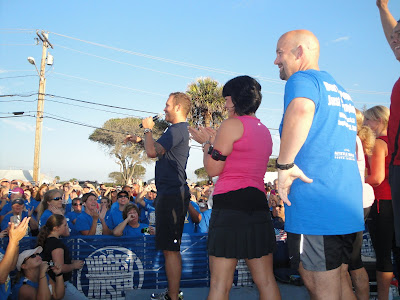 He was a nice guy, very receiving to his fans, but also kinda quiet behind the scenes. I imagine his life must be downright exhausting. At the start line, when being tugged in a million different directions by the production crew, I asked him if everyday of his life was this chaotic. He just gave a little laugh. I seriously don’t envy that guy, or anyone in Hollywood for that matter! 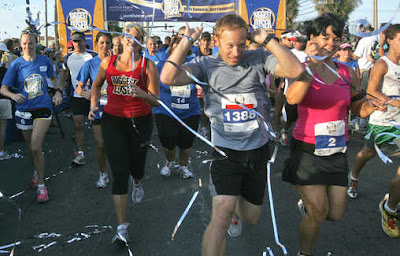 We started the race (can you spot my pink shoes?) and I took off with local runners Logan (The UnaRunner) and Murray. We ran with season 5 (I think?) winner Ali Vincent (pink tank top above). She was very sweet and seemed very genuine. Time after time, a runner would come up to her and thank her for all the inspiration she has given them, and then share their weight loss achievements. 40 lbs. 80 lbs. 100 lbs. 5k’s. 10k’s. Couch to marathons. It was amazing. And towards the end of the race, though Ali was clearly tired/struggling (the South Carolina humidity is nothing to mess with!) she still hugged, high fived, and cheered for almost everyone she could.

We crossed the finish line, and I went back to my duties of “Bob watch”. But after it appeared the production crew had everything under control and the other volunteers were successfully pushing people out of the finishing chute, we were released from our duties. I eventually headed back to the volunteer tent and marveled at the long line to meet Bob and the contestants. This picture is maybe a third of the line? 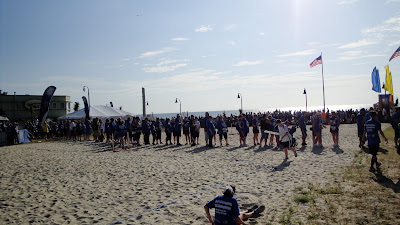 I headed back to my parents hotel room. They had been visiting that weekend and my mom and sister were awesome enough to walk the 5k, as Dad played camera man. 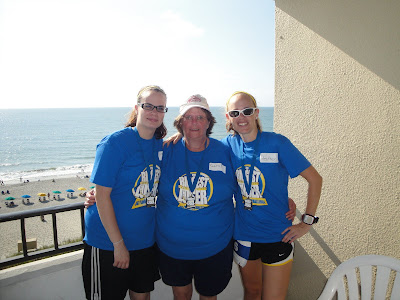 As I walked back, I marveled over the morning I had just had. A beautiful ocean front sunrise. Meeting some celebs from my favorite show. Spending the morning with friends and local runners alike. Running (that never gets old!) And witnessing people take those first steps. It was a good morning indeed.

The Biggest Loser 5k/1mile challenge is scheduled to make appearances in 16 cities (so I’ve heard) over the following year. I am not sure they have announced the other stops, but if it comes your way, do not miss it. Volunteer if you can. It is an experience you are sure to never forget!

(oh, and they give you race bling! You know I love my medals , haha ) 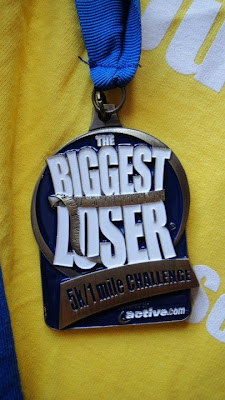 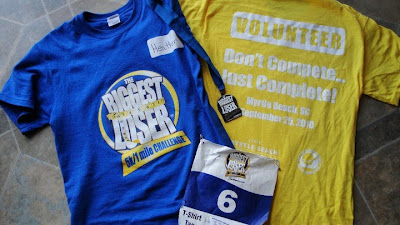