This past weekend I had the incredible opportunity to run the 2018 Ragnar Trail Relay in Fort Mill, SC for a second time…this time hurricane free, though still not without it’s muddy charm.   Over the past 8 years I’ve recapped a number of races and events from a first hand point of view.  I realized, however, that this is nearly impossible to do for an event where you only run 1/8th of the distance.  So instead of give you a blow by blow recap of each run, each beer, and each nap, I figured I’d share the top 8 reasons (one for each teammate) why I love Ragnar Trail Relays, and Ragnar Trail Carolinas in particular.  In absolutely no particular order, of course. 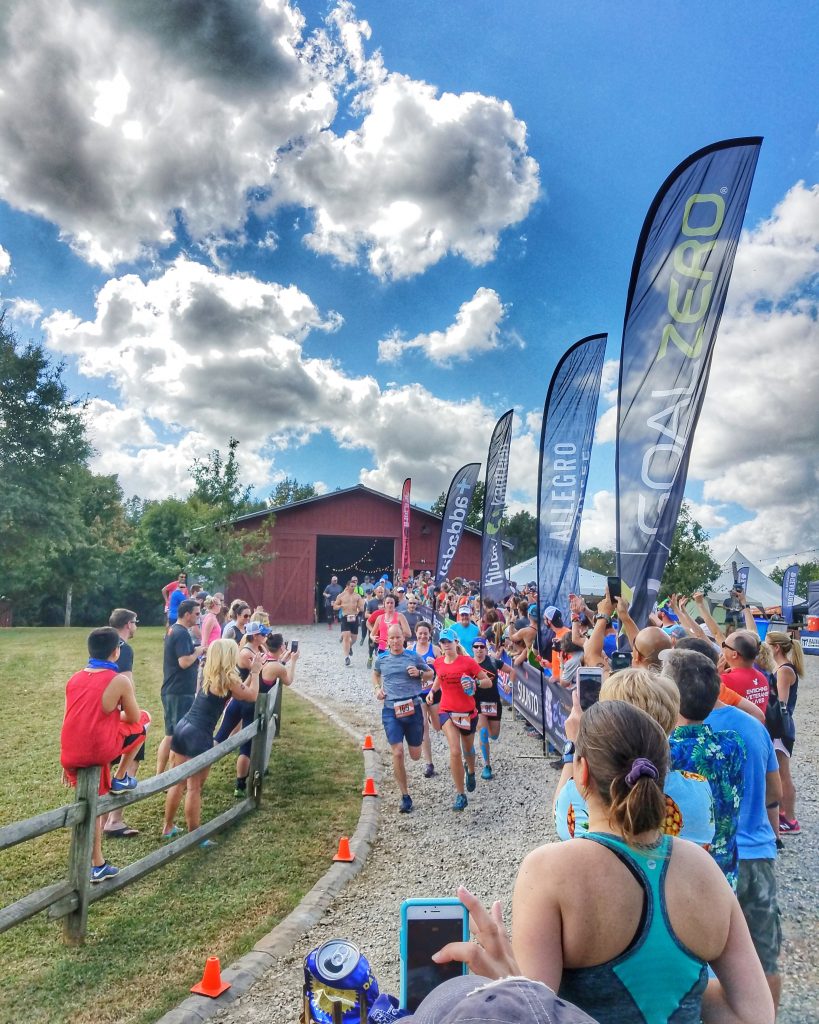 If you know me, you know how much I love to camp.

If you don’t know me, know this: I love to camp. 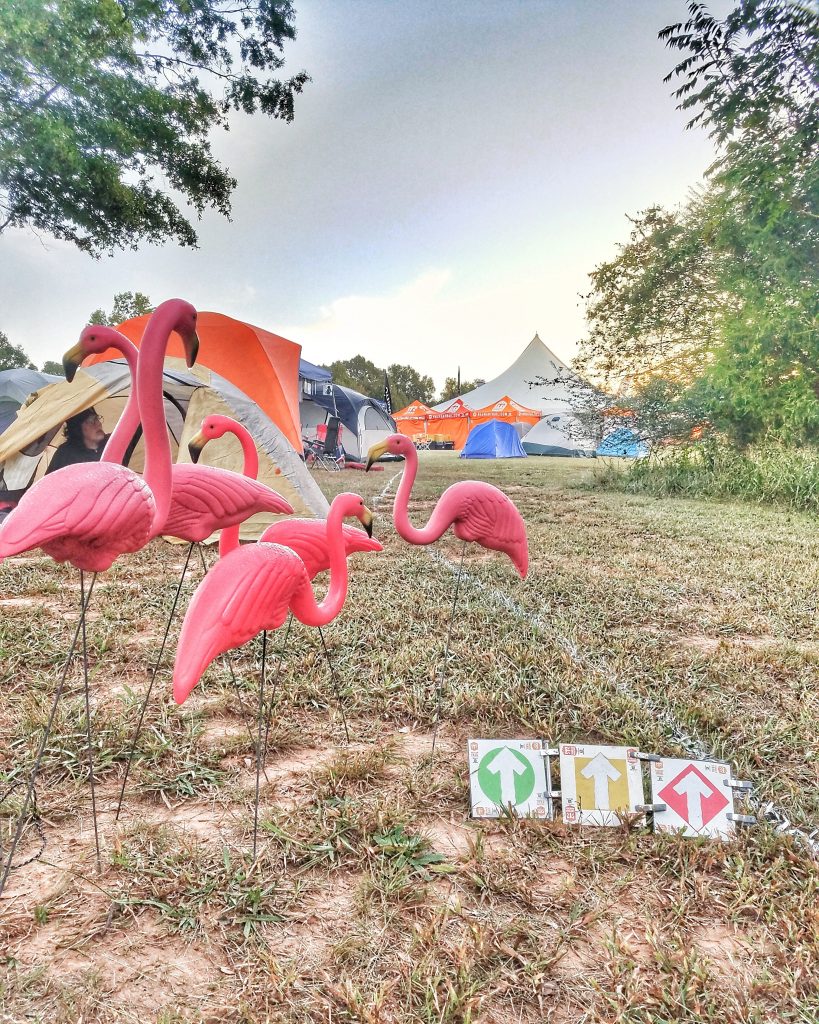 Tents. Flamingos. Trail markers. This is the life!

I never sleep indoors as well as I sleep in a tent, even though I still sleep on the ground at home (furniture is overrated).   I hear the road Ragnar Relays are fun, but if you ask me, sitting in a camp chair on a hill cheering strangers on and then being able to stretch out in your own tent is significantly more fun than being stuck in a van with smelly runners for 120+ miles.

I often joke that the trails are my church, but if ever there were proof that a higher power exists, it’s demonstrated in the beauty of some of the trails I’ve traversed in my life.  Anne Close Springs Greenway is no exception. 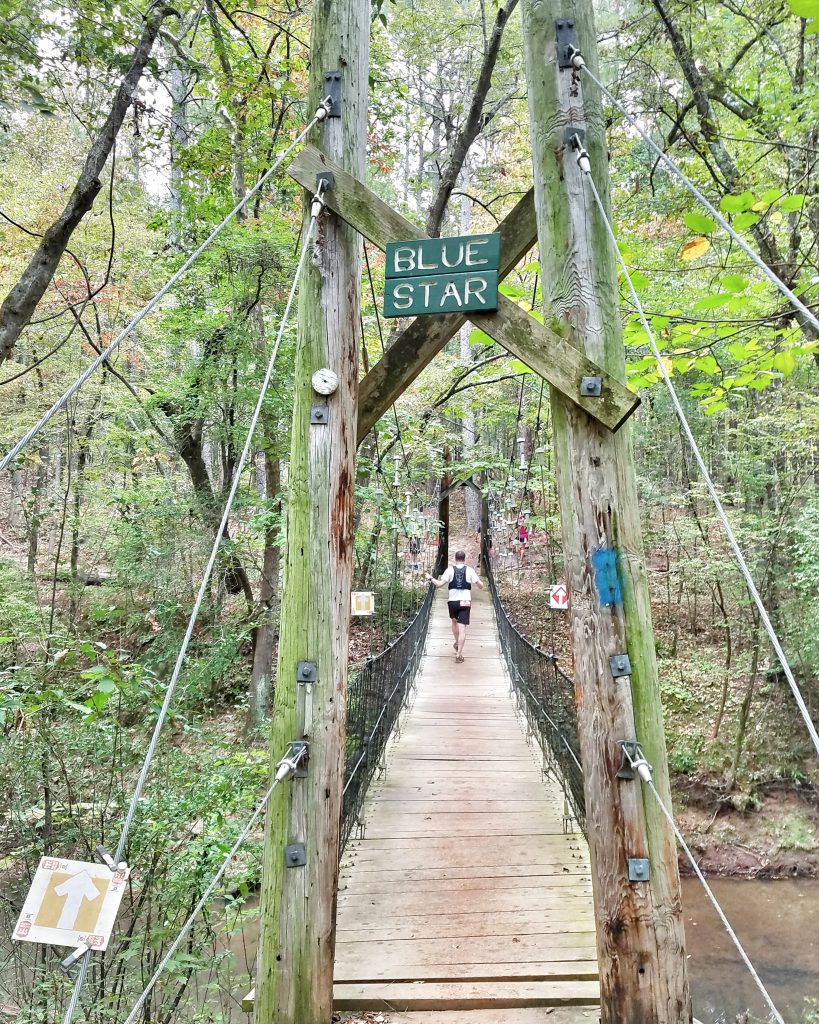 At one point during my last loop, I came around a corner and entered a trail that was surrounded by the most incredible shades of green, it literally took my breath away.  Pictures can’t do the trails justice (well, at least not my pictures.) I’m so incredibly grateful for any opportunity that allows me to experience new places and new trails, and Ragnar sure knows how to pick them. 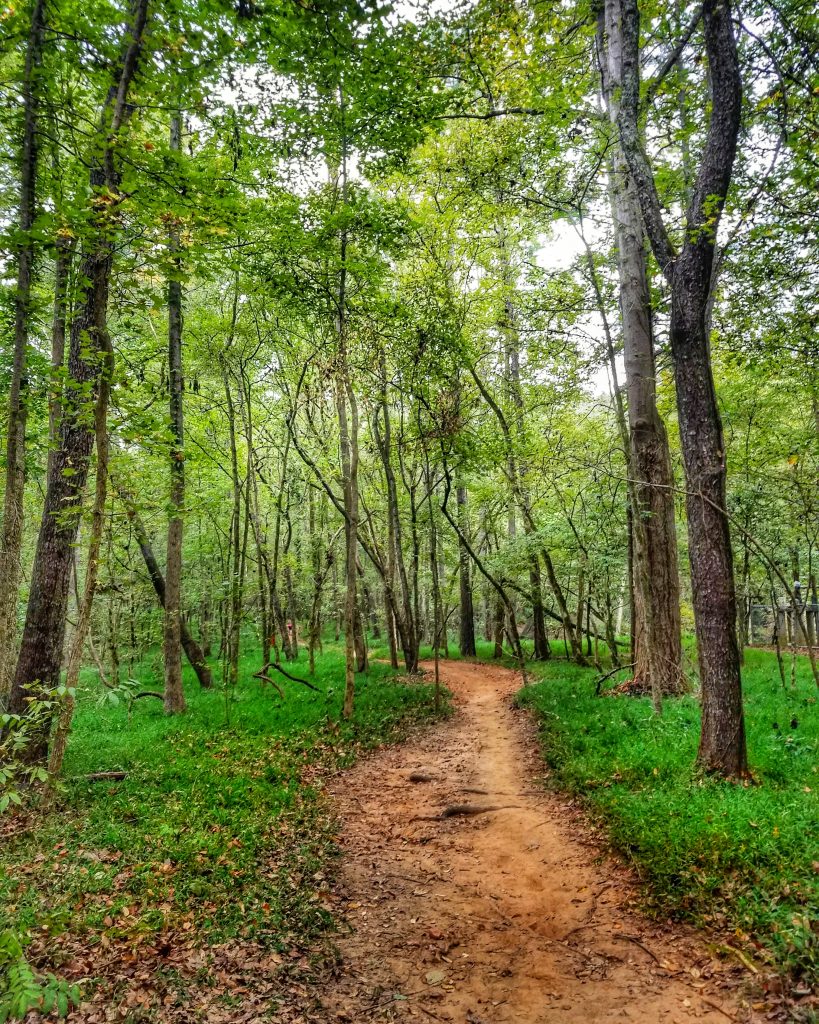 Have I mentioned I have found the best ones?  Well I have.  The kind of friends that will feed you vegan snacks and microbrews when your plan to go grocery shopping once you arrived at the race venue was thwarted by a killer parking spot that simply couldn’t be given up.  The kind of friends who will “knight” you with a light up Medieval Times sword before your leg of the race.   The kind of friends who put up with you when you start to freak out that you don’t have enough time to finish the race (even though you have plenty of time) and heed to your arbitrary team pace goals. 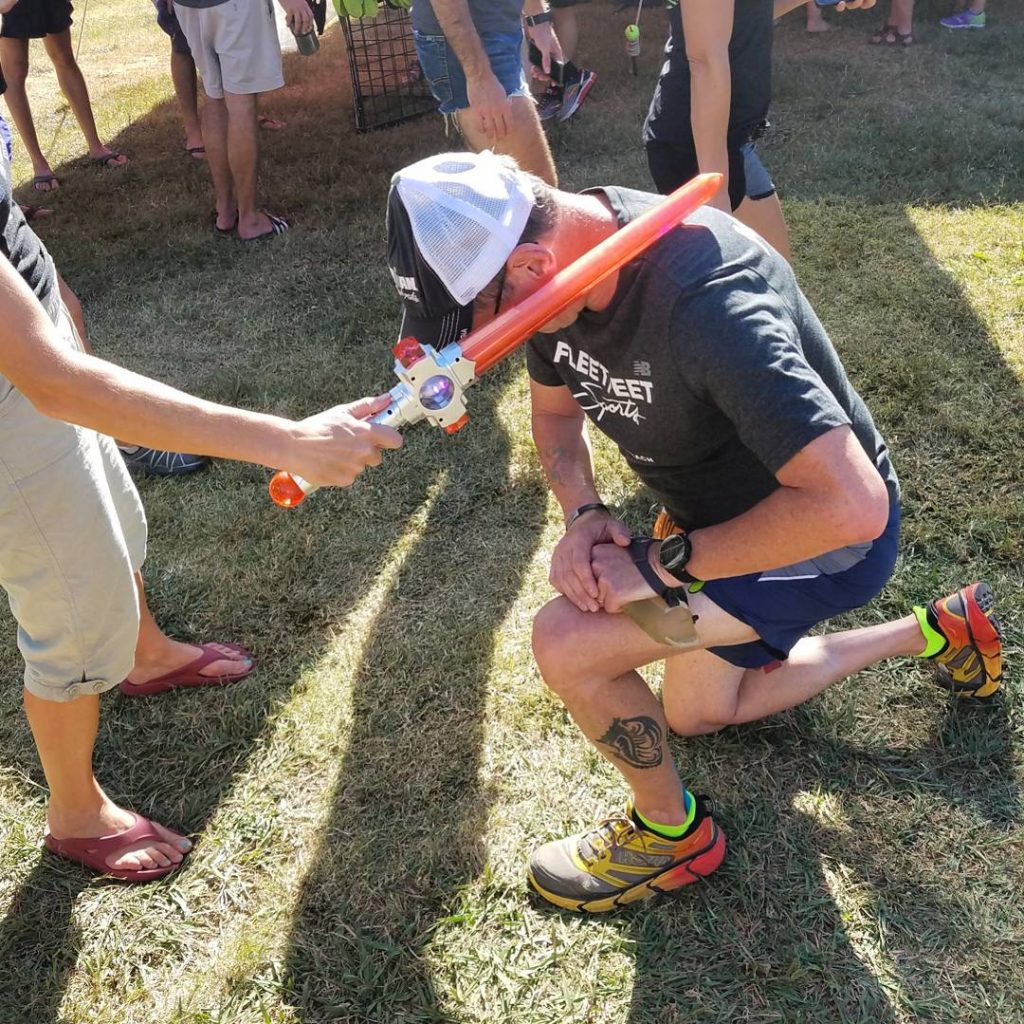 And lucky for me, the kind of friends also enjoy running on trails in new places, and don’t mind getting dirty or sleeping under the stars.   Ragnar Trail Relay gives us the perfect excuse to run, camp, drink a few beers, and bond over sleepless nights and a similar goal. 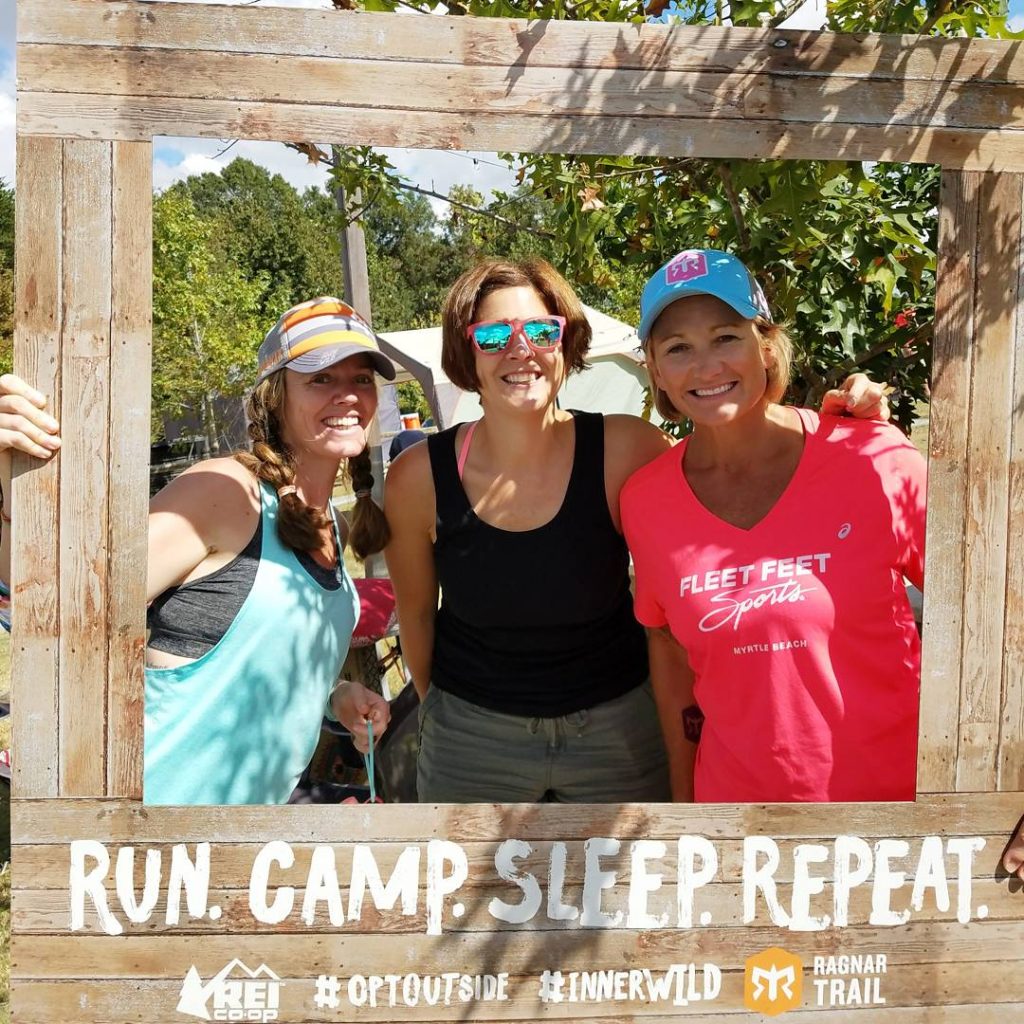 Have you ever been so incredibly exhausted that seemingly everything was gut busting hilarious?  When I’m with my amazing friends there is always a ton of laughter, but put us together after 24 hours of running and minimal sleep, and now EVERYTHING is funny.   Like picking up and moving your tent 20 feet down the trail just to confuse your last runner.   Or naming complete strangers as they run by, so you can cheer them on with a more personal feel  (“you’re looking amazing Steven, don’t quit now!!”).   The world is so scary and serious at times, so it’s always fun to be able to laugh over what can only be described as utter, delirious nonsense. 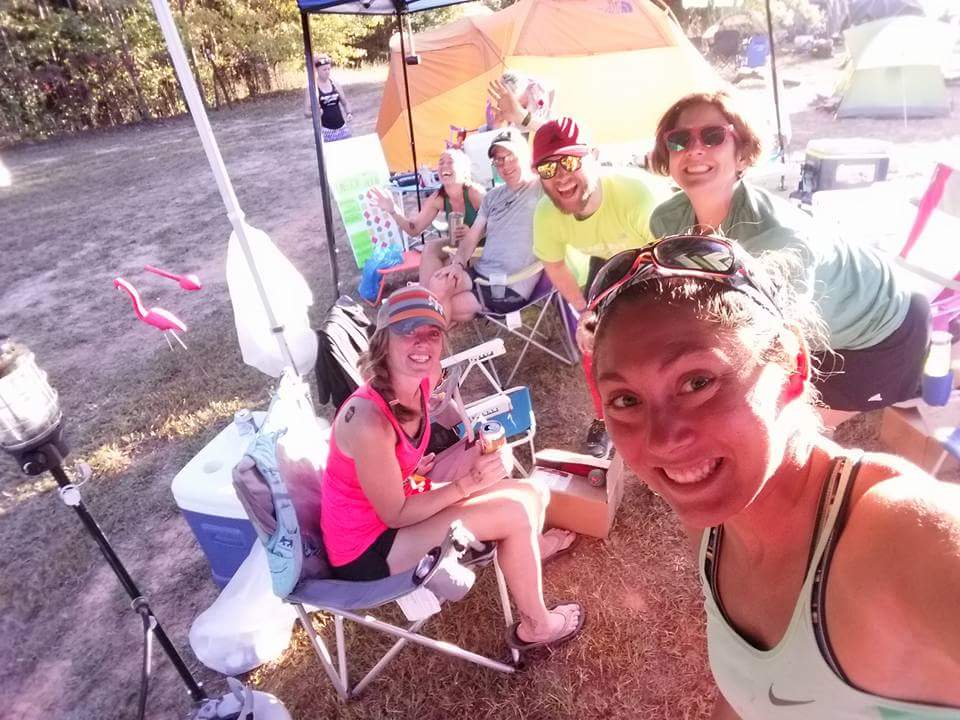 At this point you are probably thinking “but I can get stupid exhausted with friends in a tent on a trail anywhere!” and that would be true.   But let’s talk about where Ragnar comes in.   The campfire and endless free s’mores. A DJ that plays things like Joy Division and The Smiths instead of the normal overplayed top 40 hip hop hits you hear at every other race.  Comfy ENO lounge chairs and coffee table books about bigfoot. 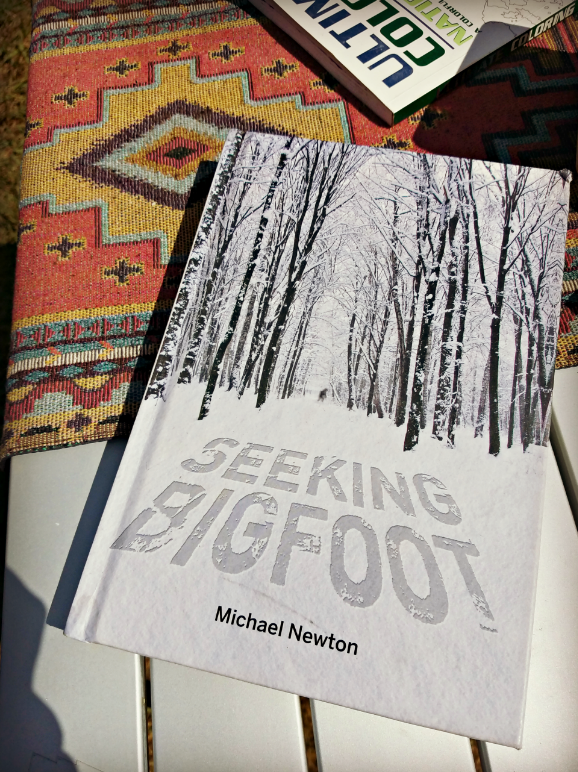 Top Gun on a big screen on repeat.  Food trucks.  Ladder ball.   And while it’s not up my alley, everyone else seemed to THRIVE on the free coffee.  A plethora of port-a-potties that were constantly being emptied and cleaned (runners will recognize how kickass this is).  Silly photo opportunities (and according to Raquel, a snap chat filter, although this old lady isn’t quite sure what that means still). 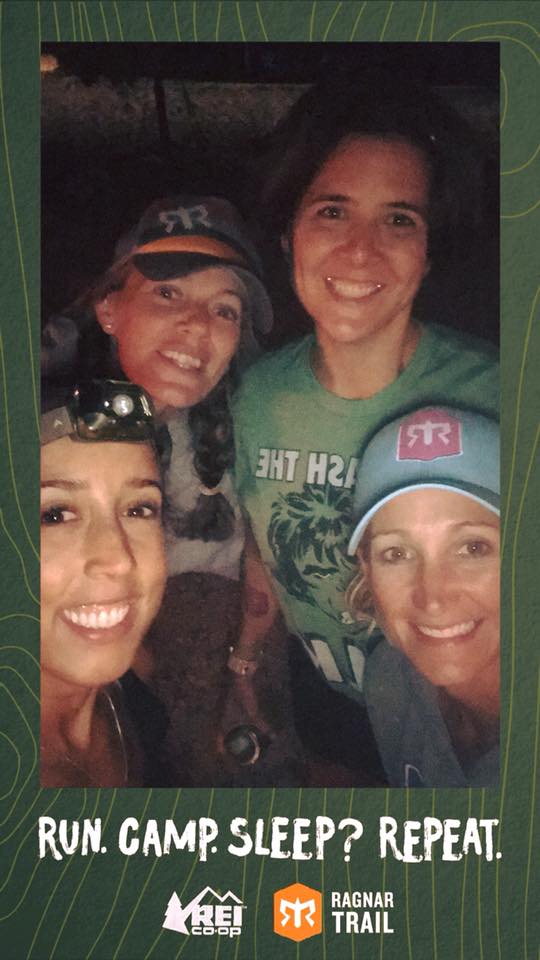 I think it means this…

A giant finishers chute that makes you feel like a rock star every time you run through it.   I’m usually one who prefers grassroots, local events where the race directors provides homemade chili and everyone contributes to the potluck aid station, but every now and then it’s fun to go to a real production of an event, and Ragnar knows how to do it right. 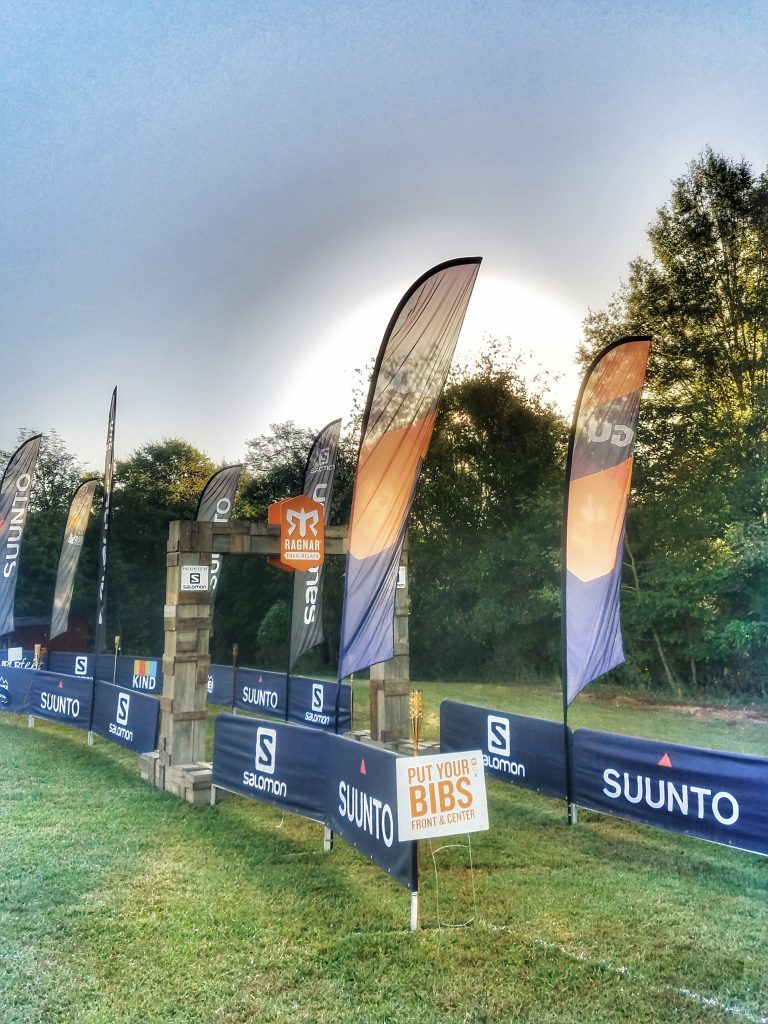 This is where I’d insert a picture of the race specific, super soft t-shirt, but I forgot to take one.  Maybe I’ll update later.  So instead, let’s talk about the medals. Last year our finisher’s medals were a multi-tool that was not TSA approved (seriously, the Ragnar Staff member told me to warn my teammates they would be unable to take them on an airplane).  This year we received a spork.  I joke that after another handful of Ragnar Trail Relays, I may become utterly self sufficient with this sort of tool collection.

THIS YEAR those of us who survived the Hurricane Matthew edition of Ragnar Trails Relay received a “Rock You Like a Hurricane” medal, which left me saying “Hello California, you are crazy, we are Scorpions, ROCK YOU LIKE A HURRICANE” in Sebastian Bach’s voices a4o la that one Trailer Park Boys episode.   It was a nice touch Ragnar, thank you for recognizing those of us that came back for more! 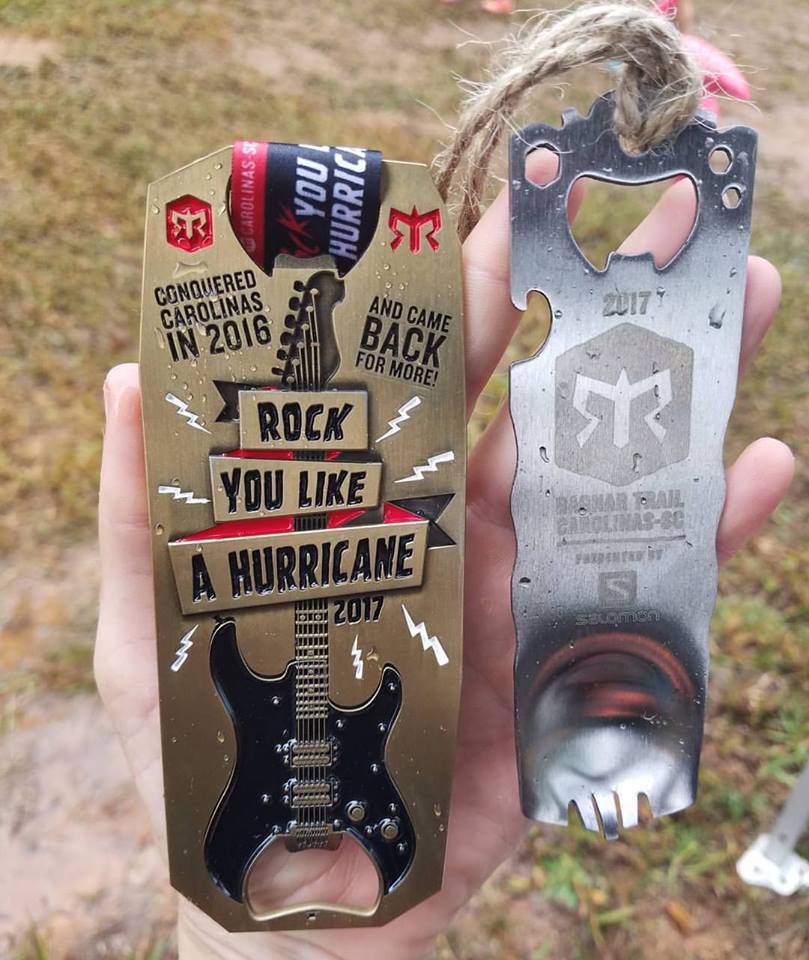 I’m sure there are some people there who are competing for time, but it seems the majority of teams are there to have fun.  This is demonstrated by the borderline inappropriate team names, costumes, and hilarious signs.  I saw a Tyrannosaurus Rex run by, twice. I saw a team where each member was dressed up like a different Forest Gump from different points in the movie.   There was a human-in-a-giant-inflatable-ball-rolling contest  (our guys came in second place, we are very proud).

You simply can’t be around this sort of fun atmosphere without it being contagious, and as such, everyone is wildly supportive of each other.

You already know my ultimate goal in life is to convert everyone to the “church of the trail”, but I’ll be the first to admit that trail running can be intimidating at first.  And trail running in the dark?  That can be downright terrifying.  Ragnar does a fantastic job at introducing people to trail running with gorgeous, yet not overly technical, incredibly well marked trails.  You might be able to get lost, but it’s pretty hard to do.  Not only are the courses marked with reflective, flashing signs, but the wrong trails are marked with “wrong way” signs.

Further, Ragnar keeps the energy high, even at night, with music and teams awake 24 hours of the day.  While you may be “alone” on the trail at night for small segments of time, you are never truly alone out there, as dozens of runners are also on the same course as you.  It’s a great intro to trail running, night running, and relay/multi day events.

Welcome to the dark side.

So, to conclude this love letter to Ragnar: if you’ve been considering signing up for a Ragnar Trail Relay, do it.  You won’t regret it.  They didn’t pay me to say that, I sincerely had a great time at Ragnar.  I know some people in the trail world aren’t huge fans of big corporate companies coming in and taking over trails for the weekend, but in this case I really think Ragnar does a great job and puts on a really fun event that is accessible for runners of all abilities.

And since we are talking trails, if you want more of my unsolicited opinion, save those stinky vans for the road runners.  Hit the trails instead!