I’ll admit, my obsession for racing 5k’s is partially to blame for the failed marathon training this spring. I kept sneaking the 3.1’s in on days when I should have been out running a long, slow, 15 miles or more. Here in Myrtle Beach, the running community is pretty small, so while my 5k race times may get me dusted elsewhere, here on the Grand Strand they more often than not earn me hardware. I love that thrill of competition, the possibility of leaving each race with a title, whether it be overall or age group.

I’ve come to realize however, that the thrill of running my heart out for coffee mugs and trophies will have to take a temporary back seat if I ever want to conquer this marathon beast that has been plaguing me.

The first person I told about my decision to back out of VT City marathon was coach Jeff, via email. I told him that I wanted a fresh start for Chicago; I wanted to start from scratch. He said we’d start Monday.

Monday…that leaves me the whole weekend as a training free-for-all. Which means…I can race a 5k! Wooohoooo!

While I didn’t head into this race in the best of shape, the Little River Blue Crab Festival 5k is by far my FAVORITE local race, so I just could not pass it up. It’s just a very pretty course, and believe it or not, has rolling hills. Tiny hills, but hills none the less. The entire course is lined with these huge mossy trees (I don’t know what they are called, my thumbs are far from green), and the start and finish are on the waterfront. Plus, it’s usually one of the last, if not the last 5k’s of the season, as it gets too brutally hot and humid, even in the early morning, to safely run races. 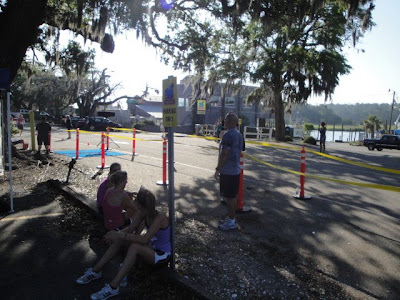 So, after telling Rich “all I want for Mother’s day is for you to watch the kids bright and early so I can run a race” (after all, it was his designated day to sleep in), I registered. Happy Mothers day to me.

This morning, I picked up Rich’s little sister Hope and we made the 30 minute drive to Little River. I told myself to go out there, run a good race, and have a good time. Zero expectations. I knew where I was coming from training wise, and not to mention, I had heard the weather forecast. 90 degrees, they kept saying, 90 degrees! Even the announcer at the start of the race was reminding everyone to stay cool and hydrated. Hope and I ran a 3/4 mile warm up, and I could feel every ounce of my body protesting. Oh yeah, this would not be a race to “race”.

Haaaaaaah! Tell that to my alter-ego, Ms. Crazy-Competitive-Shorts, who showed up right as everyone started to congregate around the starting line. All of a sudden I started eyeballing my competition. (Let me tell you, 25-29 is a very hard age group to spot. Especially in runners, because it keeps you looking young and pretty. Right? Right! ) The race director was trying to kill a few minutes while the timing guys finished setting up, and I thought I was going to jump out of my skin. As much as I hate it, I live for the pre-race jitters.

FINALLY, the gun went off, and we took off.

The start of this race gets me EVERY. SINGLE. TIME. The first 150 yards or so are downhill. Not a steep hill (because we don’t have those around here) but just enough of a slight grade to give you some serious speed. Combine that with the first 30 seconds of a race adrenaline surge, and the fact that I was sandwiched between all of the speedy men, and I end up with a Garmin telling me to slow the *beep* down, you are running a sub 6:30 pace. The one girl next to me took off, and I didn’t see her again till the finish line. About 2 minutes into the race I easily passed the other girl in front of me.
And so it went for the first two miles. It was hot, I was running, and man was I tired. But I held my own in the high 7:00’s/low 8:00s. I’ve worked really hard this spring (when I actually trained) on pushing myself through the physical, and more so mental pain of running. It’s so easy for your body to try and tell you “hey let’s take a walk break!” and even harder for you to tell it “shut up, keep those legs moving”. The mental struggle IS my biggest struggle. And I’ve gotten much better at taking control. That said, it’s pretty hard to push through when the sudden exhaustion symptoms include dizziness and slightly blurred vision. Believe me, I tried for a few seconds. But as soon as the chills hit, I instantly knew the heat had gotten to me already.

So I stopped and walked. Not for long, but long enough for the lady I had passed earlier to pass me back. The last mile was killer. I would run as long as I could until the double vision came back, then I’d walk. When I could see straight, I’d run again. I can hear my mom in New Hampshire scolding me as she reads this “HEATHER JEAN!!!” (moms use middle names when they are serious). Yeah, yeah, I realize it was stupid. Before anyone lectures, let me just say I know better, as we discussed heat exhaustion/stroke and dehydration in not one, not two, but three separate classes this semester, not counting my American Red Cross first aid certification course. Unfortunately, Ms. CCS mentioned earlier is more stubborn than I am. Had this been a training run, I would have stopped immediately. Had this been a race with “zero expectations” I would have stopped immediately. And at one point that’s what this race was. But now, here I was in third place with less than a mile to go. I wasn’t giving up. Besides, there were plenty of people behind me to call for help if I fell over . Kidding, kidding, (sort of).

The last quarter mile was the worst, and Hope (Rich’s sister) was right on my tail. Literally 50 feet behind me. If it had been her that had passed me, I would have been happy. But at that point, I wasn’t giving up what I had fought for. That freaking finish line FINALLY came into view, and after I crossed it I couldn’t help but push away the timing chip lady as she tried to stop me to take my chip off of my shoe. What I meant to politely say to her was”hey, I really need to walk this off, but I swear I’ll come back in a few minutes and you can have the chip”, but instead I mumbled something completely incoherent. She led me to the curb and sat me down (and then took my timing chip).

On my left was Hope, and on my right was the girl who beat me (2nd place winner). All three of us sat on the curb, sweaty and red faced, and came to the consensus that, holy cow, it’s HOT out here! It was somewhere in the mid 80’s already, and around 76% humidity.

After sucking down some water, orange slices and a banana, I felt somewhat human again. We stuck around and collected our awards. My finishing time of 24:46 was surprisingly good enough for 3rd place overall female. Hope won 1st in her age group of 15-19. 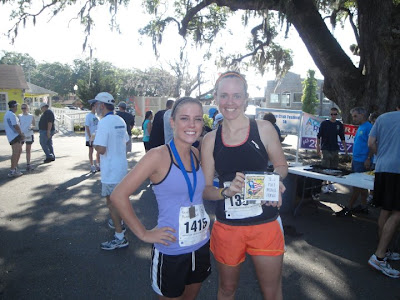 And hey look, it’s just what I covet! Something completely useless to sit on my medal/trophy shelf. No really, for those of you new around here, that’s not sarcasm, that’s real talk. I really would take a cheesy trophy (or pretty plaque in this case) over a functional coffee mug any day. It’s how I roll, I love the hardware 🙂 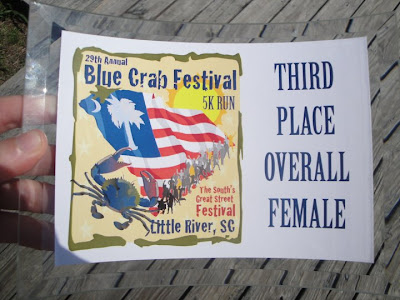 So there, it’s out of my system. Next stop: Chicago. And it’s going to be a long, hot road to get there, but I’m pretty sure I *finally* want this (meaning a GOOD marathon performance) more than I’ve wanted anything else in my life. Even more than my collection of 5k winnings…