Countless times I’ve written, and read, posts regarding the importance of making time for yourself as a mother.  In the nature of helping others to succeed we often put our own needs second, without even realizing it.  And while we all know a “happy mom equals a happy family”, this phenomenon of putting others first extends well past parenthood.    The past few weeks my calendar has been jam packed with clients at the gym.  I LOVE this. I love helping others, I love that I don’t scare people off so much that they don’t come back for a second (third, tenth, etc) session.  But while I’ve been spending so much time writing up client training plans, traveling to and from the gym, and of course, actually training, my own personal workout sessions weren’t just moved to the back burner…they fell right off the proverbial wagon.

And that’s OK, because this happens from time to time to all of us.  Without fail, something will come along to gently or forcefully snap us out of the rut.   My “something” was the Friends of Pisgah Trail 10K this weekend.

I went into this race feeling like a cocky son of a gun, which in my experience, is usually the first sign that you are going to do something stupid.  I had (key word, “had”) been feeling very strong in my running and performance in last few races.  As I mentioned a few times around here, I spent the winter on the stair climber and treadmill in addition to lifting heavy, and my endurance and climbing skills had vastly improved because of it.   This race was a small, local 10K without a ton of competition.  And though I hadn’t been on these specific trails, I had been in this state forest before and knew the types of trails I was up against.  It would be a walk in the park…or so I thought.

Geoff, his mom Louise, and I arrived at the Pisgah State Park, somewhere down a ridiculously long dirt road in Winchester (or is it Chesterfield?) New Hampshire around 9:30 Saturday morning.  It was cold and overcast, which seems to be the theme of Spring/Summer 2014 up here.  We picked up our bibs and retreated back to the car to huddle in the warmth…and stupidly not warm up.   It wasn’t until maybe  9:50 (the race started at 10:00) that I suggested we finally head out, because I needed to first make a port-a-potty stop. 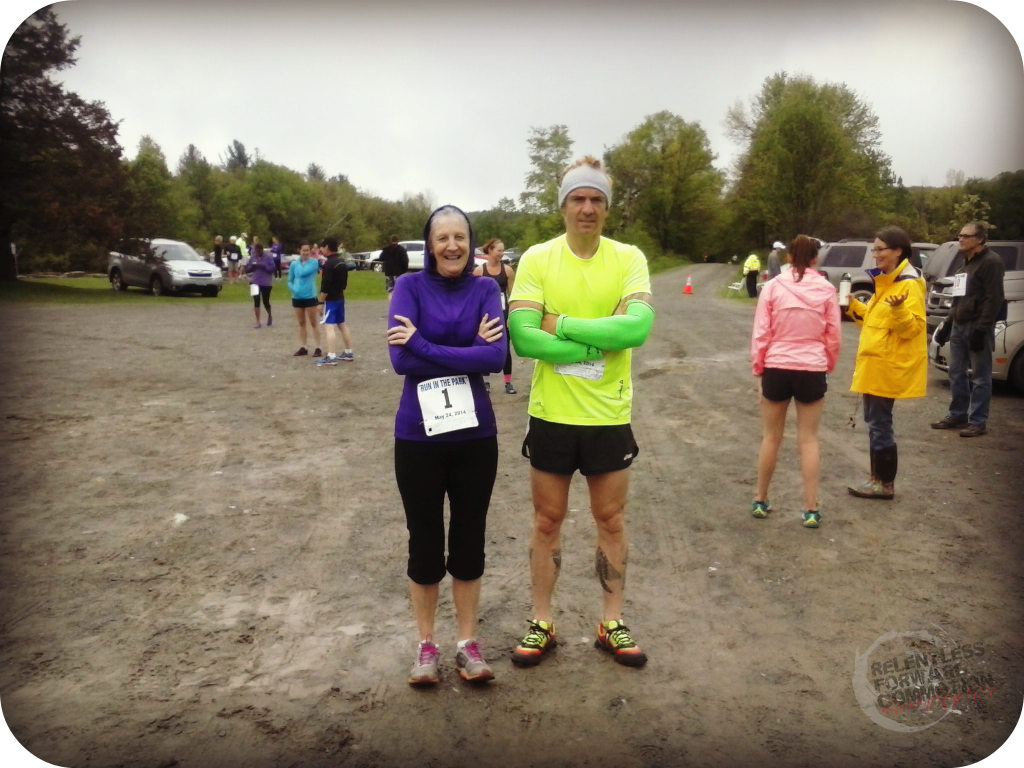 One of my favorite ladies, Jimmy-Lou,  and her wonderful son.  Without fail, Geoff cannot smile for a photo.

I made it just in time, for soon after I made my way to the front of the port-a-potty line, the race director called us to line up.  Again, still feeling like a badass, I lined up near the front.   A quick speech from the director, and we were off.

Can you find me?
photo credit: Fred Ross

The first half mile of the race was straight downhill on a wide, well packed, non technical trail.  I booked down the hill, easily hitting a 6:30 pace and staying at the very front of the pack.

Then we turned a corner and the uphill started.

And interestingly enough, the uphill didn’t stop (for what felt like the next 5 miles).   The trail became much narrower,  and littered with large rocks covered in wet moss.  Note: Salomon FellRaisers are awesome shoes, but I’m pretty sure nothing short of barefeet would have prevented slipping on these rocks.  It was gnarly, and not in the good way.  And no more than one mile in, my body let me know that it wasn’t having any of this.   I kept pushing forward, thinking the heavy cement legs were simply a result of not warming up, and the feeling would pass.   It didn’t.  The  pack split off: 10K racers to the left, and 5K racers to the right.  Slowly, one by one, I kept getting passed.

At mile two I resigned to the fact that I was no longer in this race competitively.  It hit me really quick that , oh yeah, I haven’t been running lately. Oh, specificity, you’ve got me again!   Normally, the competitive side of me would have gotten really upset.  But instead I calmly and rationally accepted the fact that the people passing me were simply in better shape, and better prepared, end of story. They deserved to be ahead of me; I deserved to hang back and suffer.   At this point, there was a very small field racing the 10K, and I suddenly, less than 3 miles into the 10K , found myself alone in the woods.  This was a first for me, as I have always either been at the front of the pack for small local races, or somewhere in the middle of the chaos at larger races.  Thankfully, the trail was impeccably marked, as I had no one to follow.

I convinced myself that it was a beautiful day for a trail run, and dammit, race or not, I was going to enjoy this.   Though the sky was overcast, the forest was glowing with that spring time green that pictures cannot even do justice.    Speaking of, the social-medialite in me kept wanting to stop and take pictures, as I felt my instagram totally needed more forest pictures.  But I reminded myself that competing or not, this was still a race and I didn’t want to be “that” girl tweeting her way through a 10K, so I left the phone tucked away in my SPIbelt

At the first water stop, I stood around chatting with the volunteers.  I think they were confused, as this was a race, and instead of the normal grab a cup as you run by routine,  I wanted to casually chat about the bug nets they were wearing as I sipped my water.  Apparently, the mosquitoes and black flies were brutal out there if you weren’t moving.

On and on I ran, alone.   I kept wondering if I was the last person, and then realized that was a silly thought, I was still trucking along at a decent pace.  Silly thought or not, it was still a possibility, and that was an incredibly humbling feeling.

I really have no interesting mid-race stories to tell you. I fell a few times, almost fell about a hundred more.  I walked more uphills than I should have. The trail was absolutely beautiful, and I kept telling myself “even though you are having a horrible race, you are still enjoying a beautiful run.”  And I kept up that mantra, until about 200 yards from the finishing line, when my loving boyfriend had come back to try and find me (I was that far behind my estimated finish time.)  In that instant, I went from happy-go-lucky “cest la vie” to evil bonk-face.  “Bonk” is the PG-13 version of the B word I should be using to describe the attitude I gave Geoff.  He yelled “Good job honey you are almost there” to which I scowled.  Then, he dared run along side of me. I snapped something along the lines of “You don’t have to run with me, I’m not a charity case” or something equally as horrible, inappropriate, and rude.

Public apology to Geoff: sorry about that.

People at the finish line were cheering.  The man who took the number off of the bottom of my bib (no chip timing) congratulated me and told me I did a good job.  I held my tongue (I think…I hope?) but wanted to scream out loud about how no, I did not do a good job, how horrible that race felt, and how this was more than sub standard for my normal race times.   I was ashamed, which in retrospect was ridiculous. Those people cheering at the finish line didn’t know how fast or slow I run.  Hell, for all they knew, I just ran a PR. (And technically I did…personal record for my slowest 10K. But that’s not the point.)

I tried my hardest to hold it in, and not ruin Geoff and Louise’s great races with my poor attitude…though in this case silence says more than words ever can.  As they went off to enjoy the amazing post race spread (pizza, bagels, brownies, fruit, cookies…it seemed endless) I went off on my own to pout in the car.

The saying “with age comes wisdom” certainly rings true.  While I am far from wise, I’m learning to become far more introspective and take lessons away from every situation.   After throwing a mini public temper tantrum in the form of a facebook status update, I sat and really thought about what had just happened: I expected my body to perform well, yet I hadn’t given it the training in order to do so.   Nothing more, nothing less.  It was silly of me to be upset.  It was silly of me to be angry at myself. It was silly of me to be such a poor sport at the finish line.

We all have bad races from time to time, but this was simply was a case of cause and effect: train hard, perform well; don’t train hard, don’t perform well.  And neither situation is a determining factor of my self worth OR the amount of enjoyment I can take from participating in a race.

I pouted, I got over it, and I realized I truly did have a beautiful, albeit slow, run through the woods this past Saturday morning.

But with that said, I’m ending this post and going for a run.  Thank you Friends of Pisgah 10K, for snapping me out of the training rut I didn’t even realize I had fallen in.