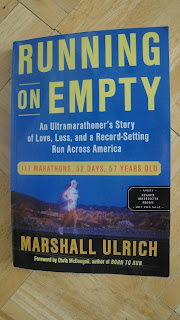 I’ve said it a few times on this blog already but I’ll say it again: I don’t really read books for pleasure. Textbooks: necessary.  Interesting articles I come across: of course.  The Hungry Lady Bug and other tongue twister picture books: part of my job description.  But 200+ page chapter books, fiction or non, for my own pleasure? Doesn’t happen very often.  It’s not that I don’t enjoy reading, it’s just that, dare I use the age-old parent go-to excuse, there just isn’t enough TIME in the day.

So when I do sacrifice the time to pour all of my attention into a book, it’s got to be good. It has to hold my attention, and shut up the voices inside of me saying “dishes need to be done, fold that laundry, you should really vacuum, don’t you have a paper due?”  Marshall Ulrich, world renowned extreme endurance athlete, succeeded in not only shutting up those voices, but captivating them as well, with his new book “Running on Empty“.  I read the book in one day, with a two year old and a four year old simultaneously using me and the couch as a jungle gym. If that right there isn’t screaming “POSITIVE REVIEW” I don’t know what does, haha.

I’ve pondered for the last few weeks since I finished the book HOW on earth I was going to review the book without retelling the whole story, because I genuinely loved every bit of this book.   I was intrigued during the foreword by Chris McDougall (author of Born to Run, which I still haven’t read yet, I’ve got to be the last runner on earth who hasn’t, but anywho) when he spoke of this man, Marshall Ulrich, who at age 50, ran Badwater Ultramarathon 4 times in a row, back to back,  that’s six hundred miles across Death Valley, completely unassisted.  The same man who ran the Leadville 100, jumped in a car, and drove straight to (and ran) the Pikes Peak Marathon.  Who in their right mind does that? I mean, I know us runners are a crazy bunch, the ultra-running crowd even more questionable.  But this man?  I wanted to learn more.

It was in the first chapter, the first few pages, that I was officially sucked into the story.  Marshall Ulrich tells the heartbreaking tale of how his first wife was dying of cancer at the young age of 30. A doctor suggested that Marshall take up some form of cardiovascular exercise to help his own stress and increasing blood pressure due to the situation, and so he began running.  Very quickly, the running became his emotional coping mechanism.  He knew  that his increasing absence due to running was driving a wedge between him and his family, but he felt compelled to run anyway.  Then in one heart wrenching confession, Marshall describes how his wife, on her deathbed, begged him not to leave at that moment for a run, but the overwhelming feeling of claustrophobia at the situation and NEED to run overcame him, so he regretfully left her, and ran.

As an outsider who doesn’t know Marshall Ulrich from John Doe, it tore at my heart to read that confession. Yet at the same time, I totally, completely understood.  Guilty myself of running away from things I don’t want to deal with, using my training and racing to push out other emotions and situations I’d rather pretend don’t exist.  I can’t be so bold to say I can  to even begin to comprehend how it must feel to watch the love of your life wither away, but as I read the beginning of the book, I just….completely understood why Marshall did what he did.

And from that point on, only ten pages in,  I wanted to read more.

“Running on Empty” really is the true story of Marshall Ulrich attempting to break the transcontinental (i.e. coast to coast, CA to NY) running record.  Marshall talks about every aspect of the crossing, from the technical details-what he wore, ate, sponsors, how much he slept, how far he ran each day, the necessity of the lip-sh*t,  etc; to the emotional details-how the support of his wife Heather (great name, just saying!) was one of the only things that got him through each day, the strategic, emotional and physical hardships of the crew that helped him in the crossing.   And for the drama loving folks out there, you’ll be drawn in by the story of Marshall’s friend/partner/competition in this transcontinental run, who turned into anything-but-a-friend who tried to sabotage the entire event.  There are also encounters with wildlife, gunshots, and near misses by cars.

But my favorite was always the insight into Marshall’s mind throughout the crossing of America, and in some of the other adventures he briefly described (like, summiting Mt. Everest) . What drives runners, especially world class ultra runners such as Mr. Ulrich, to do what they do?  If any of us can train physically for this type of event, what sets these people apart mentally?  Because if you’ve ever run a (measly, in comparison) marathon, you know the mental battle is what makes or breaks you as a runner.  Absolutely fascinating.

I could ramble on all day , but quite frankly, you need to read the book yourself.  As I already said, it was a “can’t put down” type of read, and I will boldly say, one of the MOST motivational stories I have ever read.  In fact, I will place 85% of the blame on Marshall Ulrich for pushing me over the edge into the “yeah, I guess I’ll do an ultra after all” territory (after previously SWEARING I’d never run any further than 26.2 miles). But that’s another story for another post 🙂

Required comment:  Riddle me this: would you ever run an ultra? Why or why not? What appeals to you about pushing distance limits? (or if you are an ultra runner, tell us why!)

Bonus entries! Do as many as you like (just PLEASE leave a separate comment for each one!)

One winner will be chosen two weeks from today, Tuesday May 3rd, by random drawing via random.org. The book will be shipped to the winner directly from the publisher.

And if you don’t win, BUY THE BOOK!  You won’t regret this read at all.

(*note* The Federal Trade Commission mandates I let you know I was provided with a copy of the book “Running on Empty”  free of charge, however, the opinions expressed in this post are those solely that of my own)