Chances are if you are a part of the endurance running community, you’ve heard of Heartbreak Hill.  Located between mile 20 and 21 of the Boston Marathon, Heartbreak Hill is a name synonymous with the race itself.  As Editor – in – Chief of Runner’s World Magazine, David Willey, says: “Heartbreak Hill exerts a pull on runners that is way out of proportion to it’s size. It’s widely noted that the climb rises just 88 feet over four-tenths of a mile – hardly an Alpine ascent. Yet this final of four ‘Newton hills’ on the Boston Marathon course is arguably the most famous stretch of pavement in our sport, where many thousands of runners’ goals and dreams have been put to the test.“ 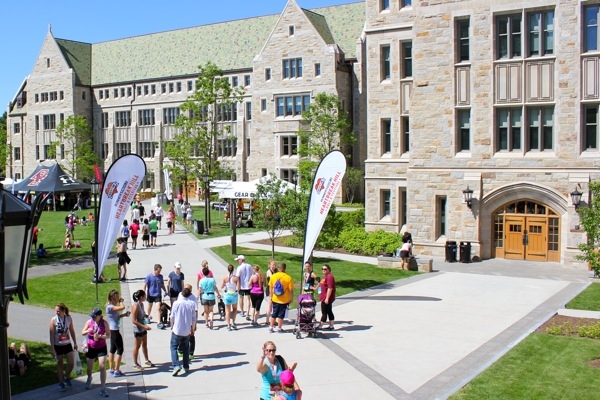 Directed by Dave McGillivray, the Boston Marathon director, the Heartbreak Hill Half festival contains races of all distances to meet the needs of nearly every runner in your family:

It also gives a chance for readers to run and interact with Runner’s World staff and editors throughout the weekend.

As mentioned in my last post, after a day full of amazing blogger events, we headed off to the expo to pick up our bibs, shirts, and check out the vendors.   As a participant in the hat trick, I was given one single bib with built in timing chip for the entire weekend, which lessened confusion and the possibility of me losing something important.   I also received a 5K/10K women’s specific tech shirt, a women’s specific half marathon tech shirt, a hat trick tech hat, and a great pair of Balega tech socks.  Swag for this race: A+ 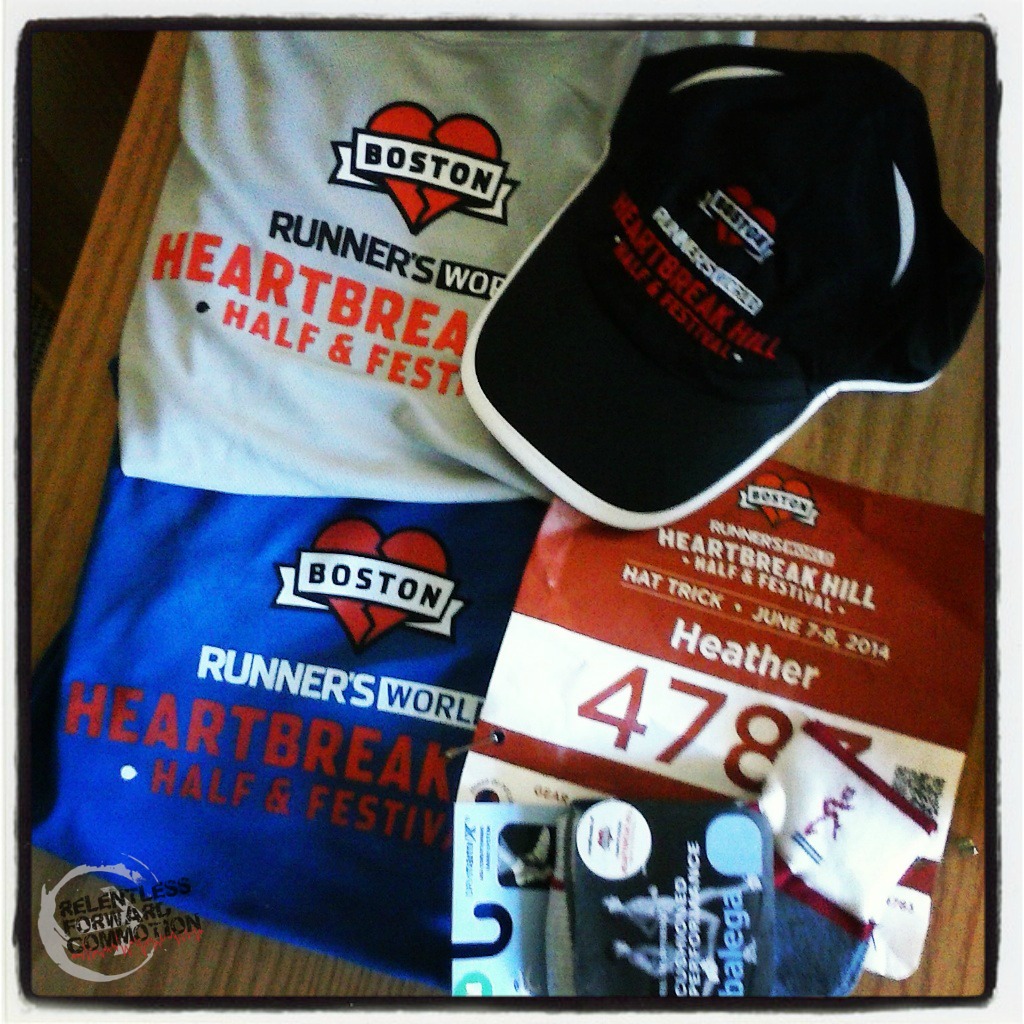 We hit up a bunch of vendors to check out products, and also thank them for providing the bloggers with a killer swag bag.  And then we posed for some ridiculous pictures, like these: 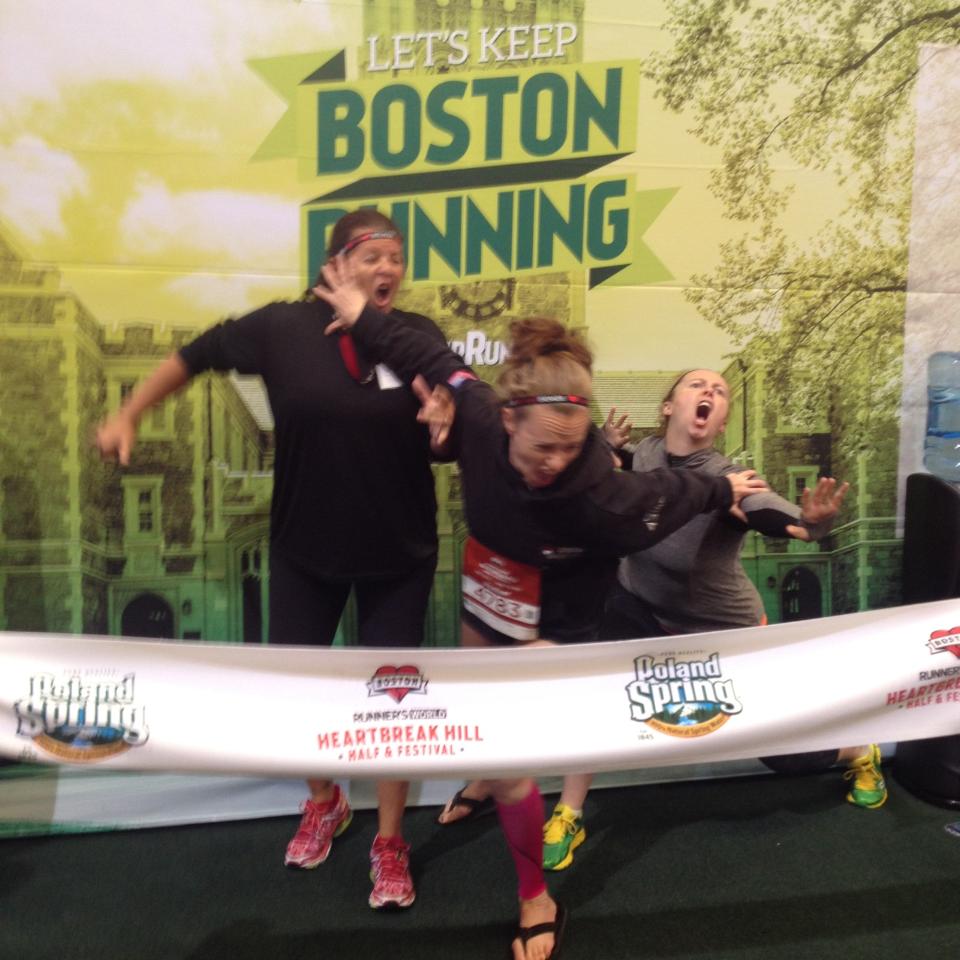 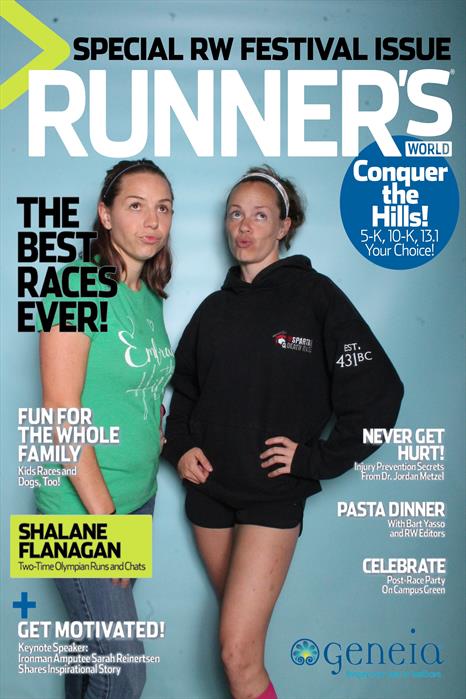 Katy and I, too sexy for this Runner’s World cover… 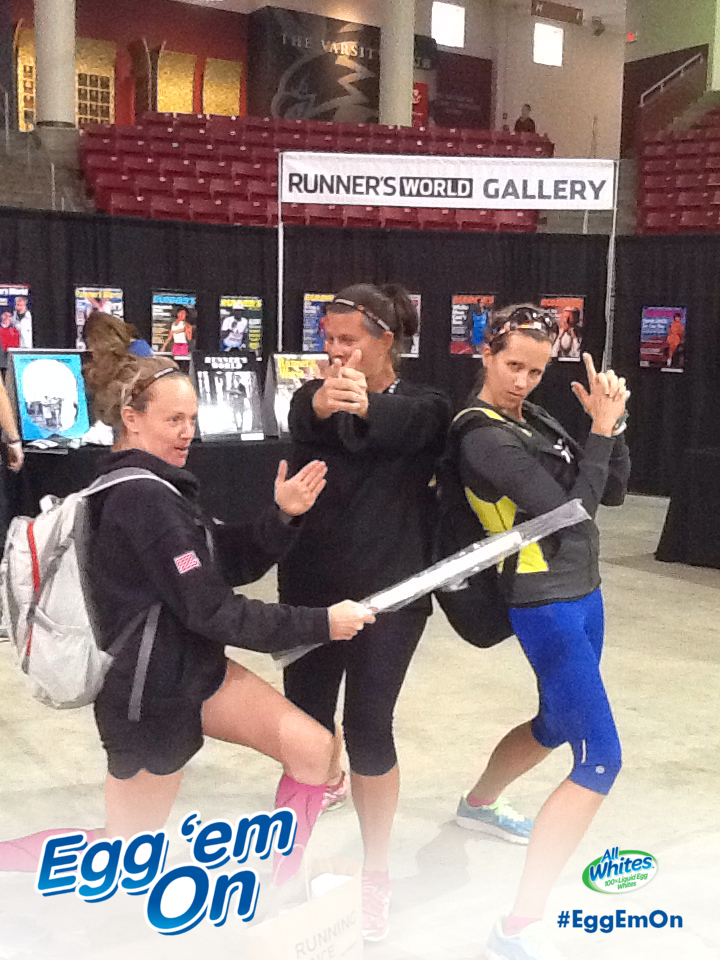 Saturday morning I awoke to a beautiful, warm sunshine filled day, and headed down to the starting line of the 5K with my blog roommates.  As mentioned in the previous post, we were staying in the dorms on campus.  This opportunity was not reserved simply for us; any runner was able to book a dorm room just as they would a hotel.  It was a great alternative to having to worry about traveling to and from the start line. 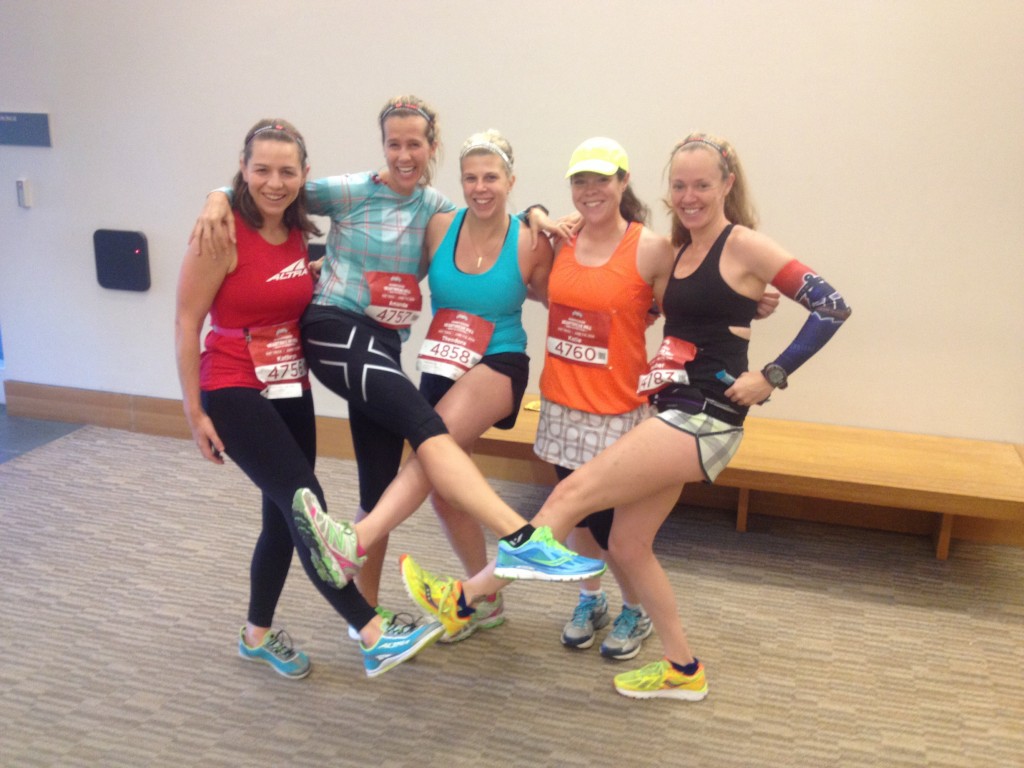 Now, as I mentioned two posts ago, I was battling some gnarly illness.  It had subsided enough to allow a plethora of ridiculous photo ops the day before (see above), but the lack of sleep and the busy days prior left me once again feeling under the weather.  I knew the 5K was the start of three races, and there was absolutely no way I was going to PR, so I tried to be smart and decided to take it easy.

This of course, did not happen.

I ran with new pal Sarah from Picky Runner and we barreled out of the gate way faster than expected.  Our plan was an 8:00/mile pace.  We started off in the 6:40’s.  I mean, it was kind of downhill at the start.  The course was absolutely breathtaking, as it ran around a huge resivoir on the Boston College campus.  At mile two we hit a water stop…and a hill. I told super fast Sarah to go on without me, I was going to stop at the aid station for just one second.

Over the last mile I not only sucked some serious wind, but I lost an entire minute behind Sarah. I obviously haven’t been road racing in a long time, so pacing myself is kind of a foreign topic once again.  (Plus, the “sick” and all.)  Needless to say, there were no obstacles to stop running and catch my breath at.  I finished officially in 24:26, which is ironically exactly what I was hoping for.  Good for 24/192 in my age group, 105/1013 females, and 271/1565 overall.  However in retrospect, it would have been significantly easier to just pace myself from the beginning, instead of going out fast and crashing at the end.  You live and you learn.

Since the 5K started at 7:15 and the 10K wasn’t going to start until 8:30, we had a little time to kill.   We hung around the finish line drinking water and Gatorade, waiting for the 10K to start, and taking selfies.  It’s what we truly did best this weekend.  For the record, there was PLENTY of water, Gatorade, chips, bagels, and bananas for finishers to enjoy. 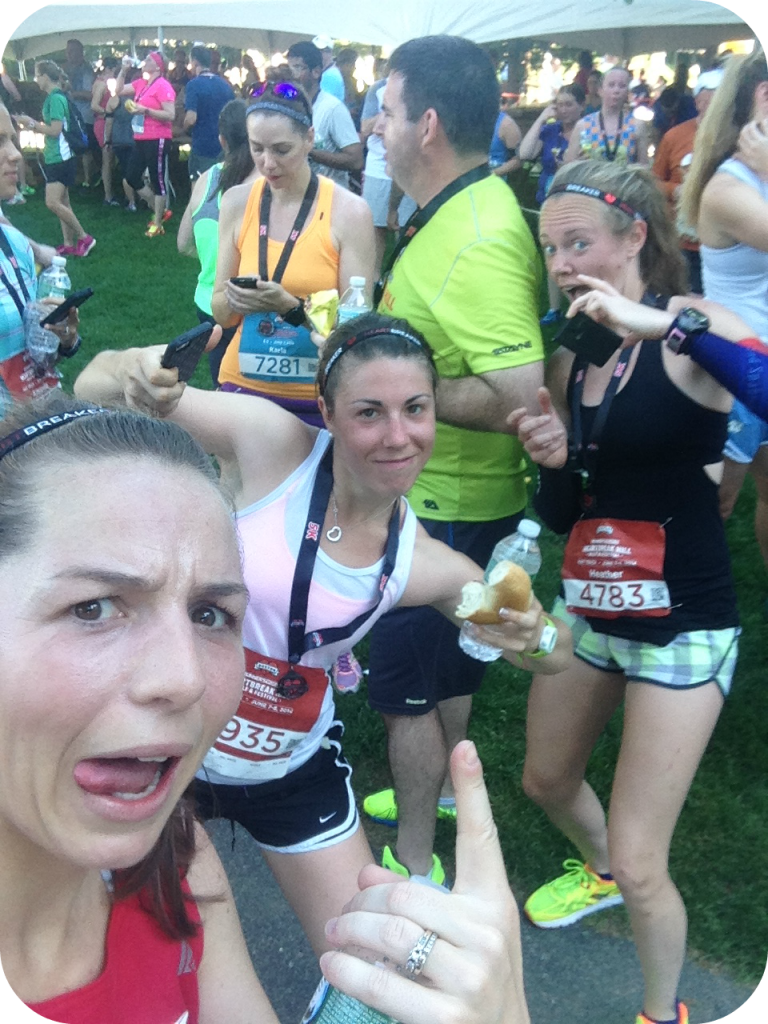 An unsuspecting selfie with our buddy David Tratner. Though truthfully, he’s probably fully aware, as “taking selfies” was the unwritten theme of the weekend. Proud of him for rocking the 5k!

The weather was warming up considerably, and as a group we decided we needed to take the 10K easy.  (Haven’t I said that before?)

The 10K course was a straight out and back from the BC campus down Commonwealth Ave.   It was getting pretty hot in the sun, and I think all of our legs were feeling not only the 5K but the November Project hill workout from the day before.  So when we hit the infamous Heartbreak Hill, we all slowed to a near crawl.  Side note: I don’t know why, but I always pictured Heartbreak Hill and the Boston Marathon course to be incredibly urban, if not Boston city streets.  Commonwealth Ave is quite the opposite: rural, with incredibly gorgeous, perfectly manicured, multi million dollar homes.   It was entertaining scenery to say the least!

There were a handful of water stops along the course with friendly volunteers.  I ran with the group, but we once again let our speedy little Picky Runner Sarah speed off at the very end.  Theodora from Preppy Runner  and I finished the race together.  And by finish, I think I might mean “raced each other”.  She picked up the pace, so I picked up the pace.  She started running really fast, so I started running really fast.  She sprinted across the finish line, so I sprinted across the finish line, neck in neck.  I loved it, thanks for the killer finish Theodora! (Can’t wait to see those finish line pictures!)

Quick recap on the race as a whole: fantastic course marking, plenty of aid stations, great course and atmosphere, fun finish line, great medals and swag.  Overall, A -.  The only reason for the “minus” was because we were bottlenecked for a little bit at the beginning of the 10K.  For a good half mile the course was incredibly narrow, and being in the apparently wildly popular 9:00/mile pace group, it was shoulder to shoulder crowded. 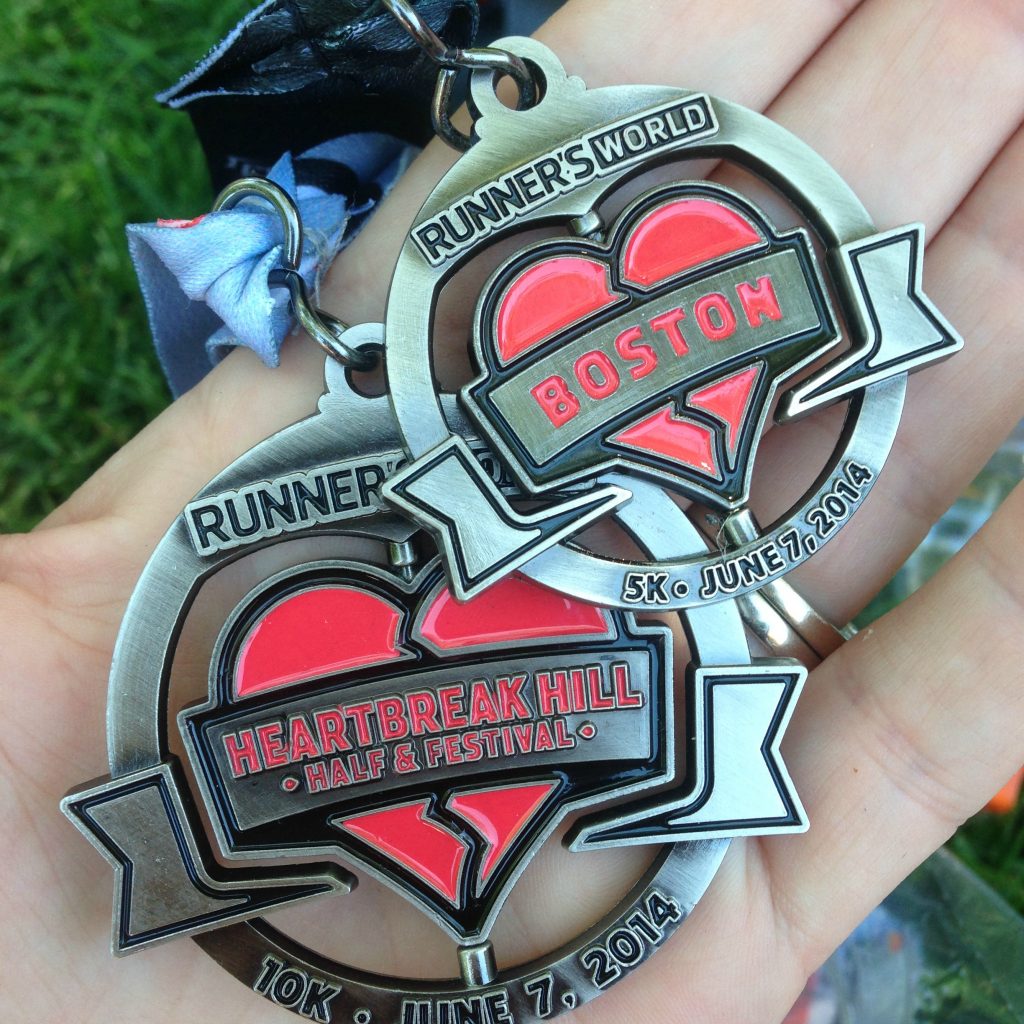 The hearts in the center of the medals spin; one side says BOSTON, and the other Heartbreak Hill Half & Festival.  Photo credit: someone with a much better camera on their phone than I have. (Thanks ladies!) 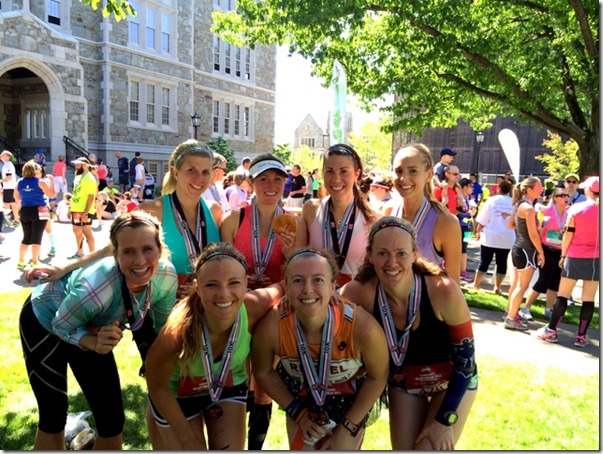 The rest of the day was spent checking out all the festival had to offer.  We of course had to watch the Eukanuba dog race; who can resist puppies?  It was scheduled to be a two mile race, however the temperature had quickly skyrocketed, and safety for the dogs was of huge concern.  Thus, it was shortened to one mile.  The pups seemed to enjoy the run almost as much as they enjoyed  the pre and post race baths.

Shout out to our new friends from Teddy the Dog Apparel and their friend Bailey (the one in the stroller!)

Next we attended a few seminars, including “My Life on the Run” with Bart Yasso.  I joke that I want this man’s job, but seriously…I kind of want his job (I’m sure he hears that often.)  Bart took us through a slide show of some of his more notable races.  My favorite story?  The time he had to run with a burro named Taco Bell. 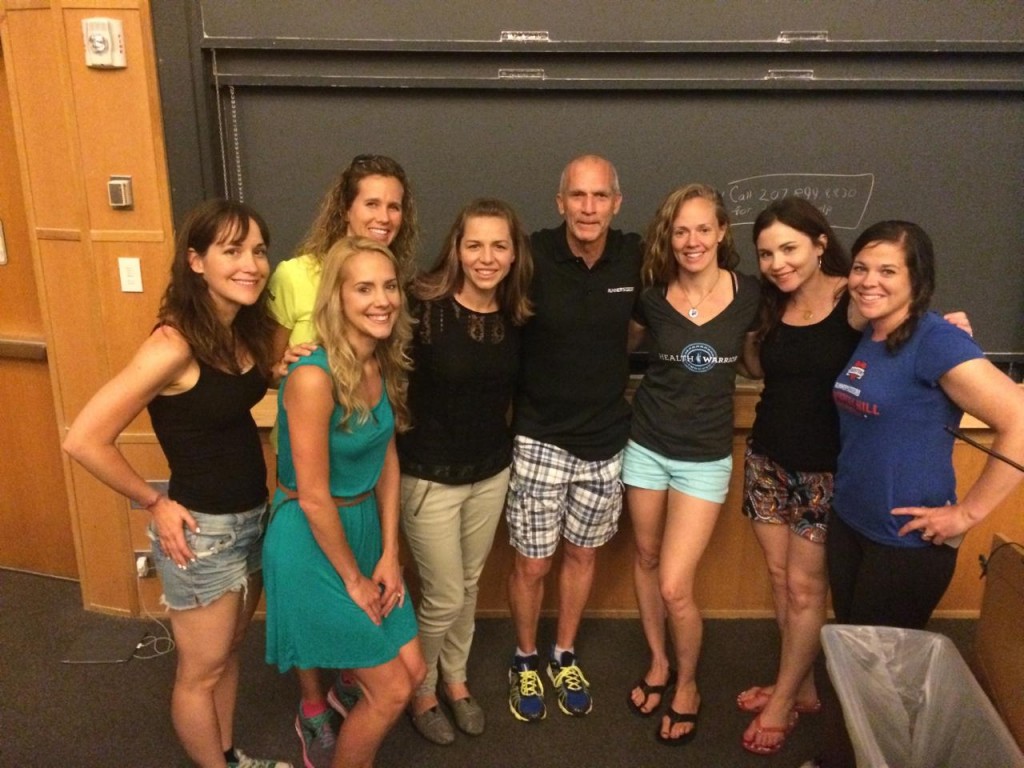 We spent time talking and meeting with various Runner’s World staff, such as Mark Remy and David Willey.  The coolest part? This was not an opportunity afforded only to the blogging group: the staff were around and available to meet and greet anyone. 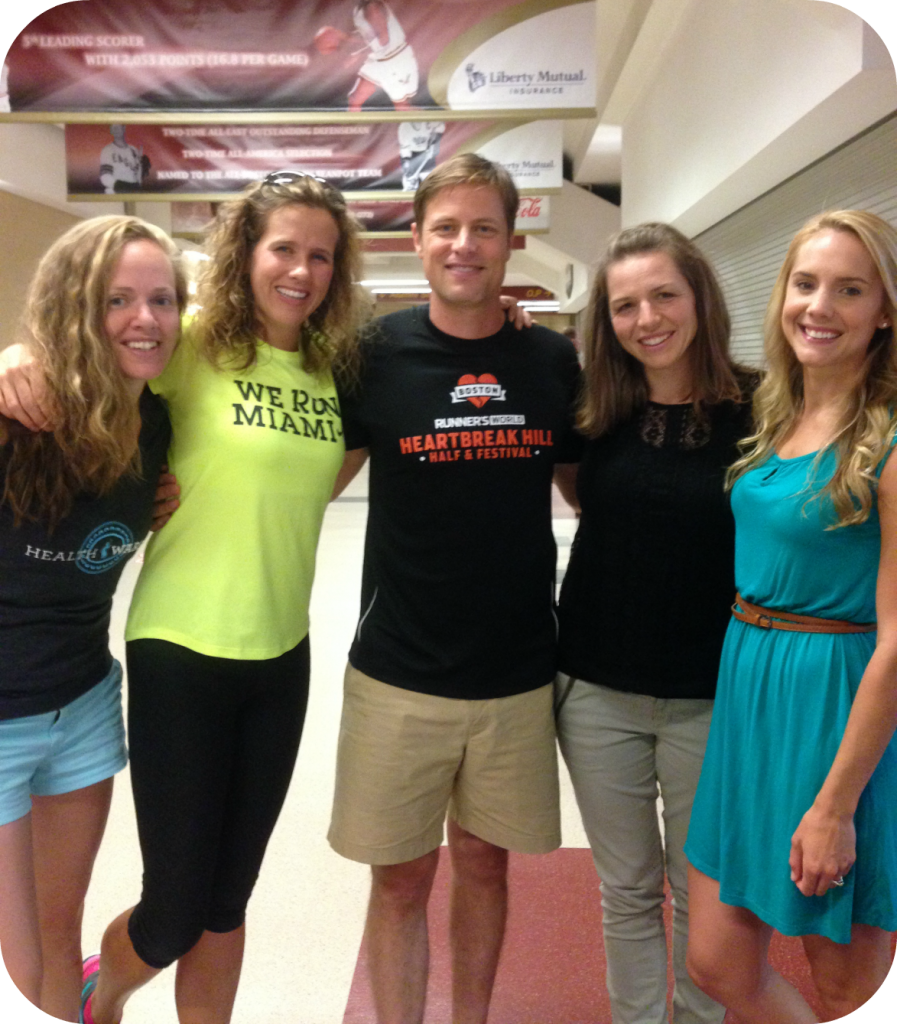 Eventually it was time for the pasta dinner.  For $30, anyone could attend the all-you-can-eat pasta dinner.  There were some amazing, healthy pasta choices (beyond just your basic red sauce., though that was an option too), as well as salads galore, and of course… dessert.   It was definitely another great option if you weren’t interested in leaving campus.

You are in luck, I actually took a picture of something I ate.  (This is rare for me) 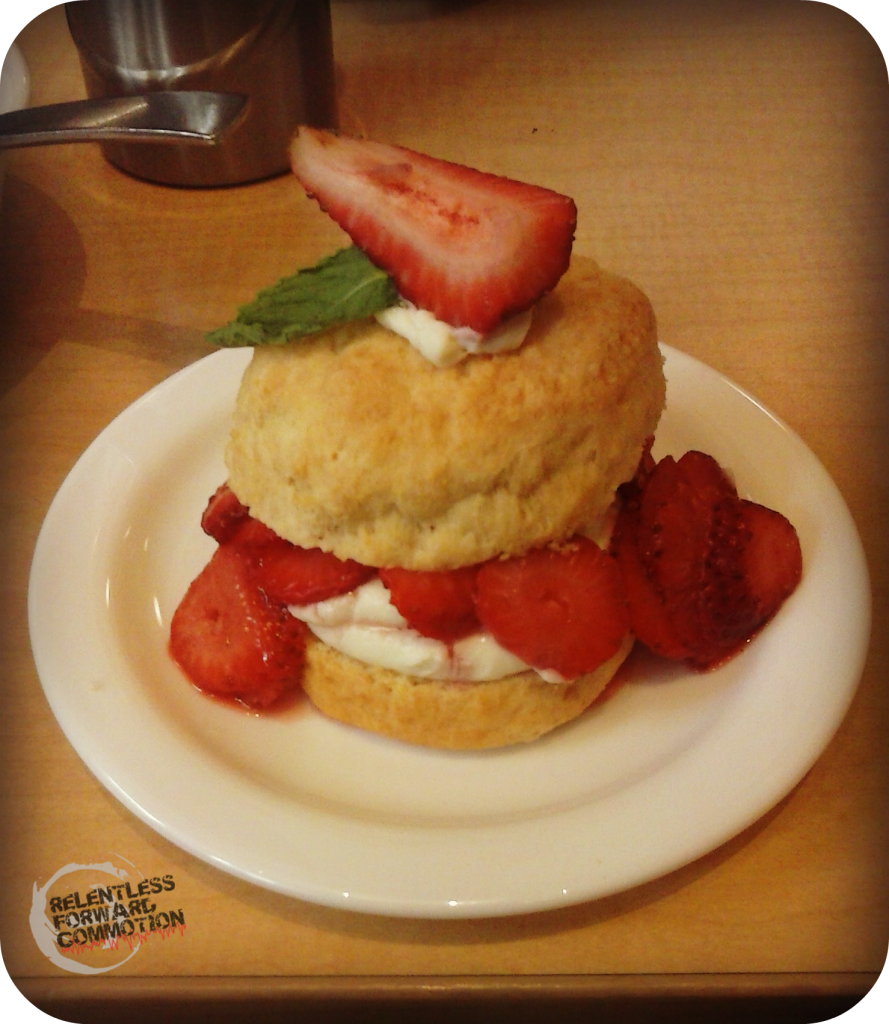 After dinner a handful of us decided it was absolutely time to RELAX before the next day’s half marathon.  So we headed back to our dorm rooms, changed, grabbed a few IPA’s (carb loading on a college campus at it’s finest!) and headed out to the lawn to relax.  We were joined by Bart Yasso for some hilarious conversation, where I once again hinted that I really, really want his job.    As in, who am I going to convince that they need to send me to run and write about the Everest marathon, etc.

Half Marathon recap coming next!

Disclaimer: Runner’s World provided me with accommodations, race entry, and the blogger experience at no charge to me.  All opinions stated are my own.