I don’t even know where to begin with this one. For those of you that haven’t heard yet, the 2010 13th annual Myrtle Beach Marathon and half marathon were canceled due to snow. About 3-4 inches to be exact, none of which was accumulated on the roads by race morning.

Needless to say, people are angry. Read the hundreds of comments following any of the online articles regarding this weekends events, or the race’s facebook page and you’ll see the tension. We’ve got angry runners who spent a lot of money to get here, and a lot of time training, in conditions much worse than this. Then we’ve got the locals. There are the ones who think that the runners are being a big bunch of babies, and the ones who are shaking their heads because the City of Myrtle Beach has once again shot themselves in the foot when it comes to pleasing tourists. A classic case of biting the hand that feeds you. Anyone familiar with the Harley bike week controversy going on around here knows exactly what I’m talking about.
I really don’t want to go into politics here on my blog, but let’s just say as a member of a household that relies on the tourism and service industry for their income, and who also lost thousands of dollars this year due to the lack of visitors during bike week, you can infer which side of the fence I’m on when it comes to our local government, and whom I believe they really have in their best interest.
All politics aside, many of you commented and emailed me asking what I think about all of this. So here’s what I think:
I think I’m totally on the fence about this one. Disappointed, angry, upset, and somewhat understanding. I think I’m glad I’m not the race directors. I think they were put in an impossible situation. As a resident of Myrtle Beach by way of Vermont, I can assure you that people in this area DO NOT know how to react to snowfall. In the 7 years I’ve lived here, I’ve seen maybe a dusting or two of snow. And during that dusting, the city shuts down. Yes, it’s ridiculous, but it is what it is. I laugh at some of you and your so-called “heat waves”. But what it all boils down to , is nothing we’ve had down here recently even compares to the 3+ inches we received Friday night. The truth of the matter is no one could know what the road conditions were going to be like Saturday morning, and this town does NOT have means of handling the possible conditions (no plows, etc).
The race directors stated Friday evening that they believed they would still be able to carry out the race safely, but the ultimate decision was left to the city officials. The city officials were the ones who deemed the race course unsafe at 10 pm the night before the race. I was obviously not at any of these meetings, so I can’t vouch that the race officials fought with everything they had to try and keep this race scheduled. I will , however, give them the benefit of the doubt and recognize that without the city’s support, the race couldn’t have gone on. They were between a rock and a hard place, no doubt.

Much of the course is only “closed” off by plastic orange cones separating the traffic from the runners and the cars…likely full of drivers who are inexperienced in driving in these conditions. Now that everyone is safe and no one was plowed over by a car possibly hydroplaning across some slush, it is very easy for people to say that this was a ridiculous decision and that the bad drivers should have just “stayed off the roads” (yes I actually saw that comment). I wonder what the forums and comments would be saying if and unfortunate situation did happen and a car blew through the middle of the pack taking out who knows how many people. YES a little slush is nothing to bat an eye at up North. Down here, people can’t even drive in the rain, never mind the snow. It is what it is.

That said, I was incredibly disappointed when I woke up race day morning to this site: Snowy grass and dry roads. No ice, nothing even close. 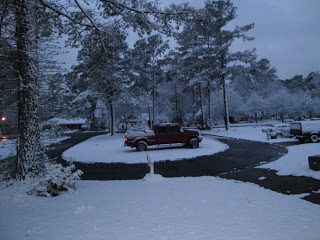 Arguing the case, as some have, that they should close down the ENTIRE road, because after all big cities such as Chicago and Boston do, is a mute point. There has never been a problem with this set up before, and honestly how were the race directors ever to imagine that we would get this crazy, once a decade snow fall on the night before the marathon. Really.
I DO think city officials should have allowed the possibility of delaying the race start by a few hours. Come on people, I LIVE and WORK in Myrtle Beach, and I promise you the ONLY thing going on this weekend is the marathon. It’s not like it’s mid July and having the roads closed a few extra hours is going to seriously hurt the city. It’s not, because if none of these people were here for the race in the first place, the streets would be a ghost town, just like it is the the rest of January and February.
A town that thrives on tourist dollars must cater to those tourists. End of story. Spoken, again, from a resident of this city.
There are talks of refunds/reimbursements/etc. I personally come from the understanding that when I sign up for an event like this, I run the risk of losing the money due to unforeseen circumstances. It’s just the way it goes. Read the fine print, when you click that little button on active.com you agree to this. Would it be nice if the City would fork over some of the money to allow the race directors to offer some kind of (hopefully large) discount towards next years race? Yes, that would be fantastic. But I’m not going to pretend I know exactly how the financial part of organizing a race works, and from what I understand, over half a million dollars of this not-for-profit race has already been spent.
So that’s where I stand, I guess.
It sucks. I am just as disappointed as the rest of you. I love this race and was really looking forward to it. I am not surprised by the city of Myrtle Beach’s actions (not saying they were the right actions, just saying, I’m not surprised). Will I be back next year? Yes. Would I come back if I spent thousands of dollars to travel and stay here for a race that never happened? Nope.
One thing I love about runners, is that you can cancel their race, but you can’t break their spirits. MANY kudos to the HUNDREDS of runners who showed up at the race start Saturday morning and ran the race regardless. Even more kudos to the city workers who showed up at the still set up finish line to hand out medals to those runners. I think that is fantastic. I’m kicking myself for not thinking of going. Holly and I did suit up and run our own little race in my neighborhood, on the dry roads. Highlight of the run was the guy outside playing with his family in the snow who asked if this was the marathon course, hahaha. Yes, we are the lead runners, you should see the other 5,000 in a few seconds here, haha. 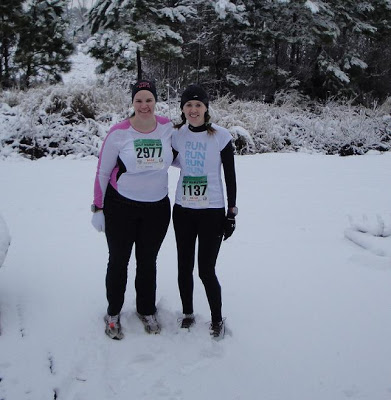 We had a great rest of the weekend, and all of those details will come in part two. I bought bike, and I’m entirely too giddy about it 🙂