First of all, we must go back in time. Cathy, my younger sister, mentioned after the Myrtle Beach Mini-Marathon that she wanted to run the Turkey Trot 5k Thanksgiving week. As Thanksgiving week approached, she decided she’d rather push it back to December (she didn’t get the running addict gene that older sister Holly and I share). Coincidentally, I found a local 5k ON her 26th birthday, the Conway Rivertown Reindeer Run, and before she could refuse, I said “happy birthday, I’m registering both of us for the race”. I also told her we were getting matching shirts. But what I DIDN’T tell her was that our older sister Holly secretly planned on traveling down from D.C. to join us for the weekend. I still can not believe that Holly and I, queens of blabber mouth and excitement, managed to keep it a surprise. But we did! And she was totally surprised when Holly jumped out of the back seat of my car when we went to pick her up. I’d show you the funny video but blogger isn’t’ cooperating today.

The night before the race, Holly and I had decorated matching Santa shirts with reindeer names on the back, and arranged our festive outfits. It has turned into a tradition…when running together, we must match and look ridiculous. I just love my sisters, haha! 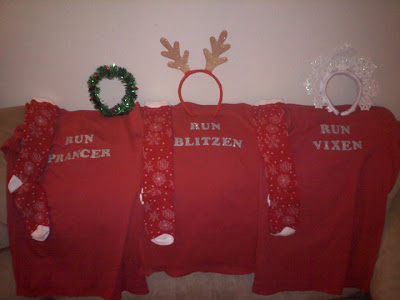 So once we picked up Cathy and forced our matching outfits upon her, we headed to the race. Picked up our bibs and shirts, and they proceeded to make fun of me for my pre 5k nervousness. Oddly, I wasn’t super nervous for this race. Slightly, but not super. I was hoping to do well, take an age group placing, but wasn’t expecting a PR or anything. It was cold, and as you know, I don’t do well in the cold. I’m a big pansy in anything below 50.

We took a few pre race pictures, with our classic sister poses….. 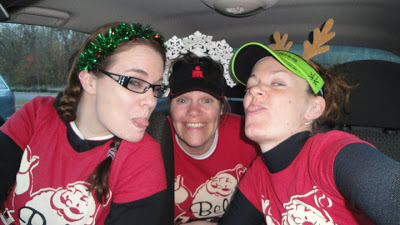 …and I headed out for a warm up. It wasn’t much of a warm up…I think I got about a half a mile in when I said “forget this, it’s too cold”. Mind you, it was in the high 30’s/low 40’s, and I was wearing a running skirt. A running skirt with the itty bitty teeny tiny underwear type shorts underneath. There was a draft, and I was just cold. The things I do for, uhh, running fashion? I hit up the porta-potty, gave my sisters a good luck hug, and lined up at the start. It was a small race, only 136 runners. I of course, went right for the starting line. I mean, I wanted to race, so that’s what you do, right? No one else would even go near the line. I felt sorta awkward front and center, with everyone else like, 4 steps behind the starting line. Finally some guy came up to me, held up his Garmin, and said “what are you going for, 6 flats?” I said no, but 7 flats would be nice. He laughed and said yes it would, and didn’t understand why the guys behind us who were going to run 5 minute miles wouldn’t step up to the start. A humble bunch perhaps 🙂

The chick-fil-a cows (two of them!) started the race, and we were off. As always, I start off way too fast, because I get caught up in the excitement and just sprint with everyone else. Fastest pace for the first mile: 5:12/mile. Whoops! I joked around with my sisters pre race that my 5k strategy is to get a good lead mile 1…recover *slightly* mile two while holding whatever sort of lead I have on whomever I’m trying to beat, and then put the pedal to the metal for mile 3.

Well my strategy sort of went out the window for this race. You see, the first half mile was uphill. What, you say? Up hill? But Heather, I thought there were NO hills in Myrtle Beach! Yeah, yeah, I say that a lot, but turns out, the next town over, Conway, has hills. Not mountains, just hills, but hills non the less. And like I said, the first half mile was UP a hill. The entire course was rolling hills. And did I mention, it was cold? I literally could not feel the front half of my feet. Forefoot striking is interesting when your forefoot is numb. Super light weight Kinvaras plus novelty snowflake socks aren’t the best for insulation.

Anyway, I pulled back a little since I knew I couldn’t hold a 5:12/mile pace for well, probably not far. The first place woman, a young local runner who I know is really fast took off. I knew I wasn’t trying to catch her. Holding 2nd place would be nice though. First mile: 7:13. I didn’t want to look back, but I didn’t have any females pass me. And hardly any guys either. Shortly after the first mile marker, I saw my friend Dawn at an intersection as a volunteer. She yelled “GO TIFFANY” shortly followed by “Oh, and GO HEATHER!” . That right there told me there were ladies on my tail! This one girl passed me shortly after. I held my pace but held her in my sights. She passed but didn’t go far. At times she was a good 2 or 3 strides a head, other times I wondered if she might want to turn around and yell at me since I was practically breathing down her neck. Is drafting illegal in a 5k?

Back and forth, up and down the hills, back and forth girl in the blue shirt and I went. Somewhere around mile 2.5 another girl came out and eventually passed us, but didn’t go very far. The last maybe 4/10th of a mile of the race was back DOWN that big hill. Some guy yelled at me “nice socks….and WOW look at those shoes!” The ViZiPRO Kinvaras never cease to shock people, haha!

Girl in the blue shirt got a head of me. At this point, I had a cramp in my chest, probably from the cold air, and I was really thinking, “just hold this Heather, 1st in your age group is fine, don’t hurt yourself”.

We got to the bottom of the hill, and the finish line was in sight. I knew I had to give it a last kick, and I’d be mad at myself if I didn’t’ at least try. I started running harder. Passed girl in the blue to regain 3rd place. Some guy came up to cheer for her and I wondered if it was going to make her push even harder. I heard some grunting and yelling, and thinking it was him coming to push her, I started running even faster. Turns out it wasn’t, it was a racer giving his last final kick in a very, very loud way. I realized blue shirt wasn’t’ going to try and catch me at this point, or if she was, my legs were faster. I set my sights on 2nd place girl, who didn’t see me coming. I tried my darnedest to catch her, and I gained on her, but in the end she beat me by 3 measly seconds. I beat girl in blue shirt by 10 seconds.

I wonder if there are any pictures from that last 20 yards, because I’m sure I looked like hell. I ran that last 0.11 of a mile (yes, this 5k was really a 5k!) in 37 seconds at a 5:54 pace. I gave it all I had. I crossed the finish line and instinctively looked for the nearest bush. Puking was a good possibility at that point. That’s leaving it all out on the race course.

I regained my composure quickly, and 2nd place girl came to high five me. We met up with 4th place girl and did the same. It was awesome competition. That was a true RACE, and that’s why I LOVE 5k’s! Well, at least local 5k’s where I can hang with the front of the pack, haha!

Final chip time 22:37. Not a PR, but it was close (well, close to my old PR and not the 2/10ths of a mile short turkey trot PR) AND a hilly , cold, course. I was very, very pleased! 3rd female, 17th out of 136 men and women combined. I beat both of my past A&P and World History professors who were also there racing. I’m just saying. Heh heh.

I shivered and shook and waited around for my sisters. They had a great race as well! 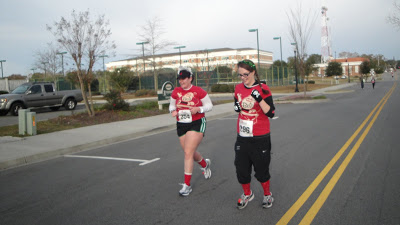 We stuck around for awards, where I got my 3rd place overall female medal/ornament. It is super cute, and while it made a brief appearance on my Christmas tree, it now resides on my medal hanger. 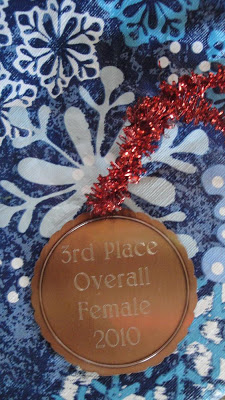 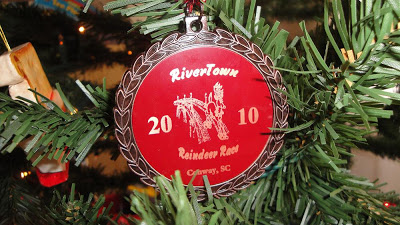 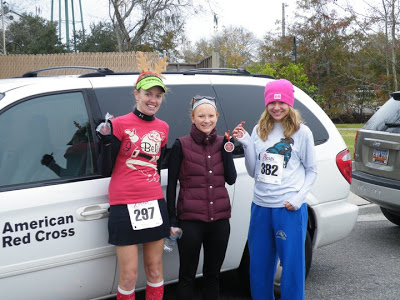 These girls make me look really tall! 3rd (I didn’t run with the antlers) 2nd and 1st.

I also got to see a lot of great running pals, here I am with Elena and her amazing volunteer outfit, haha! 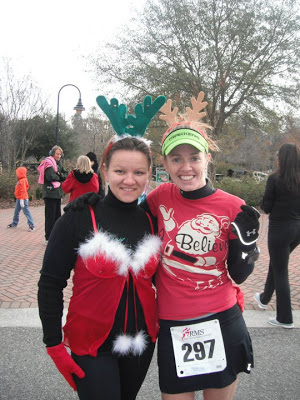 This was probably my last 5k for a while. I really really am buckling down to my training plan 100% now focusing on Myrtle Beach Marathon in February. No extra curricular races on the side throwing off my long run. A combo of a busy week, visitors for the weekend, really poor nutrition, and just being a little burnt out really threw me off track. Believe me, the visitors and the dunkin donuts were really welcome, but I only put in 8, yes 8 miles this week, and totally skipped my 18 mile long run. Thankfully we still have 11 weeks until the marathon.
But all of that said, I’m still really enjoying feeling all of my training paying off. Last spring, my 5k time was closer to 24-25 minutes, and there was walking involved. Now, I’ve taken a good 2 minutes off without even so much as stopping to grab water from the aid station. It feels so good to get faster. Hoping to see a true 21:xx 5k this spring (meaning, 3.1 miles and not 2.9). But until then….it’s back to the long runs!
Happy running my friends, and stay warm ! (I woke up to 27 degrees this morning here in Myrtle Beach!)