If the world is about to end, the most logical thing to do is go for a run, right?

That is…well, was…the premise of the Last Chance 25 & 50K, put on by Eagle Endurance in Huger, SC.  The very first running of this event, 6 years ago, was held on the day the world was supposed to end according to the Mayan Calendar.   The good news is that the world did NOT end on that fateful day (spoiler alert?) and now every year we can line up at the Halfway Creek Road primitive campsite off of the Palmetto trail to run a few miles, and celebrate the fact that the Mayans were wrong (this time).

The other good news is that this year, I remembered to register. 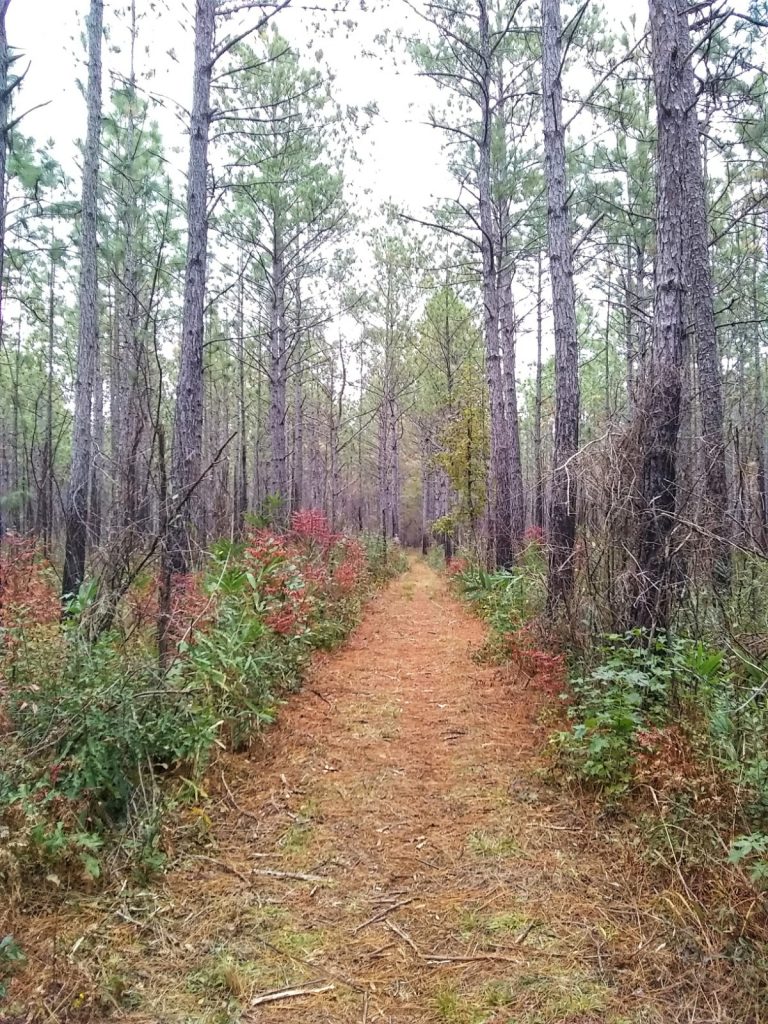 Friday night Geoff and I headed down to the campsite to meet up with our friends Brian & Dinah.  We spent the night staying warm around their brand new propane firepit, eating, laughing, and listening to Christmas music.  Whenever possible, I prefer camping the night before a race at, or near, the location of the race.  I enjoy not having to rush to get there and find parking in the morning, and if we’re being 100% honest,  I really like sleeping in tents. 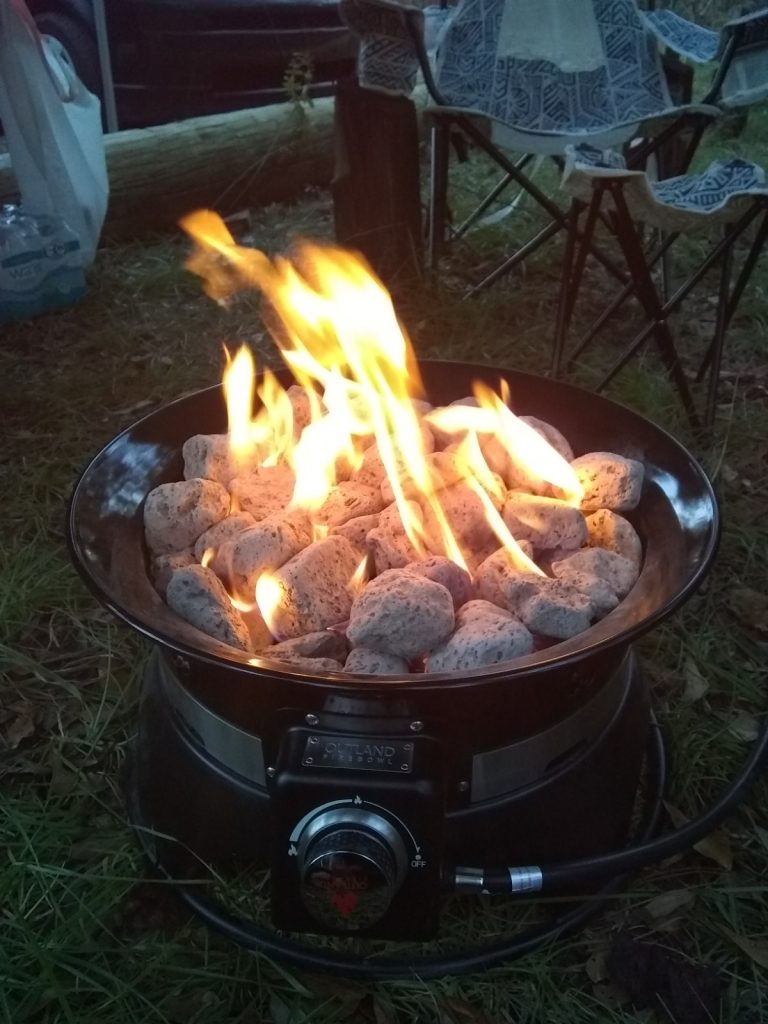 Saturday morning my internal alarm clock went off at exactly 6 am, as it does every non school day (my version of “sleeping in” I suppose) and I began the pre-race ritual.  Caffeine, breakfast, lube my feet, load the tailwind into my bottles, hit the port-a-potty.  After the debacle with the DNR ranger during Swamp Fox, race director Chad made sure the participants of Last Chance knew it was imperative that they wear bright colors on trail to not be mistaken for a deer (or whatever hunting season it is).  Needless to say, people heeded to the warning…it was hilarious to see nearly 100 runners in their brightest attire in the middle of the forest.  Especially on such an overcast, otherwise gloomy day. 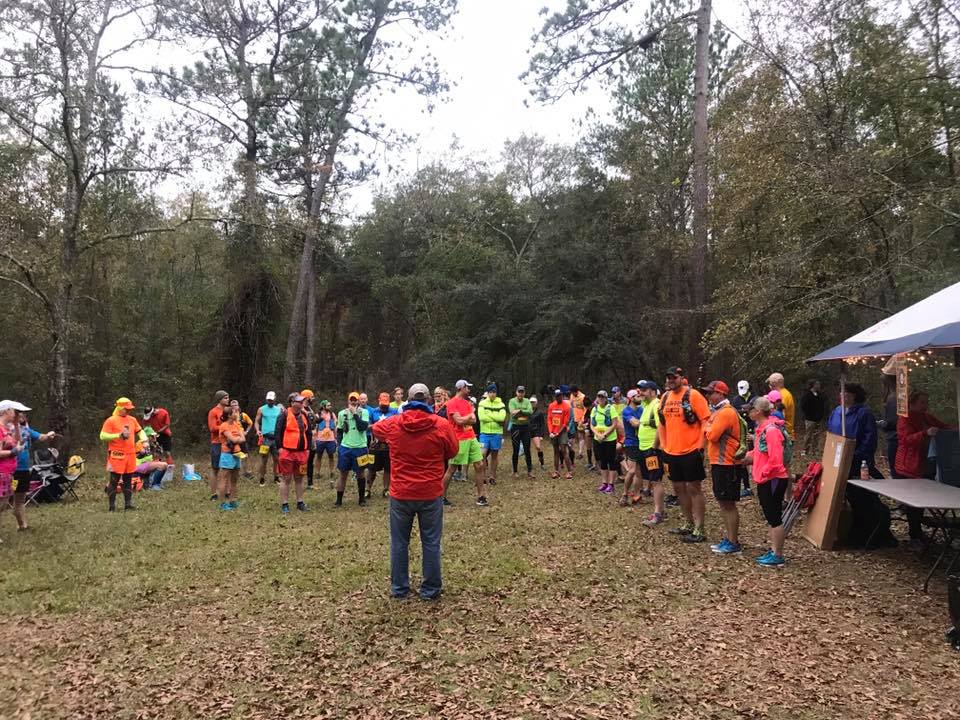 (a huge thank you to everyone who took and shared pictures of the race! )

We stood listening to Chad’s pre-race instructions, and I laughed a little when a woman asked if the “turns would be clearly marked.”  If you’ve ever been on this section of the Palmetto trail, you’d know it is nearly as straight as an arrow.  The Swamp Fox Passage of the Palmetto Trail continues on for nearly 52 miles from one end to the other with very few turns (and if there are any, I’ve probably been lost on them).   Yet still, despite its monotony, despite its rooty, swampy, often flooded, covered in bugs misery, this slice of National Forest has taken hold of a piece of my heart. I really do love it out here.

I look so enthusiastic!

I had planned to use the 50K as a long training run.  31 miles is always more enjoyable with other people around, and of course, aid stations with snacks and water strategically placed along the way.   As such, I promised myself not to race, nor care about my pace. 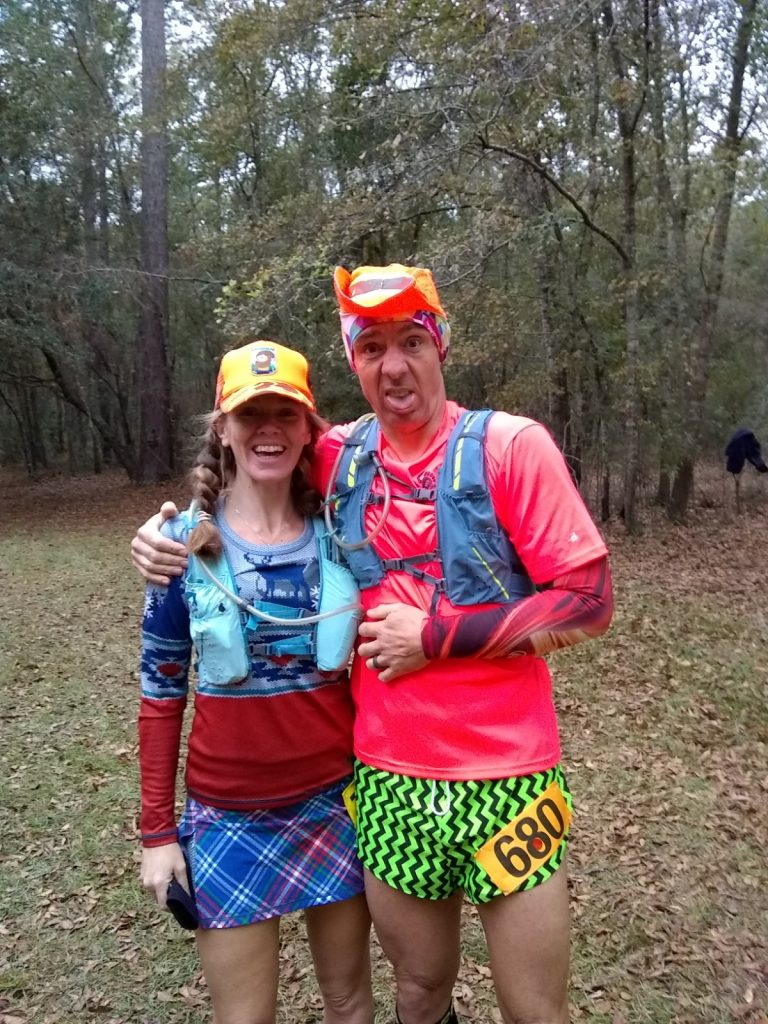 Except that I SHOULD have cared about my pace…as in, “don’t get caught up in the first mile of the race excitement”. Because that’s what I did, and it was a horrible, no good, very bad idea.

And by first mile, I of course mean first 10 miles.

I really wasn’t trying to “race” though.  In fact the first handful of women took off, and I would only see them at the turn arounds.  Rather, I fell into Geoff’s 25K pace, which wasn’t necessarily bad, except that I got so caught up in talking and keeping up with him and others that I neglected to really hydrate or take in any nutrition until it was too late. 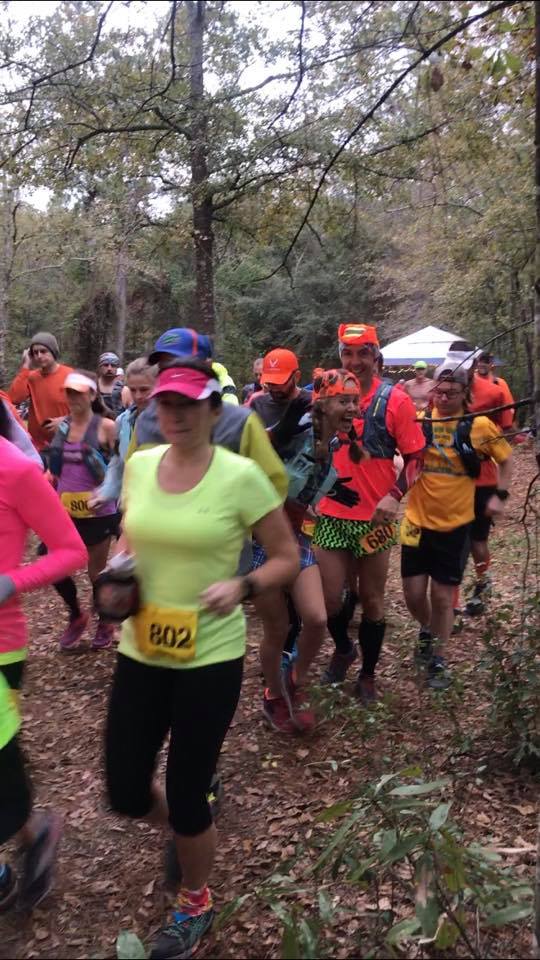 “Oh look is that a camera at the start of the race? CHEEEEESE!”

It’s a crazy phenomenon in my life.  You see, I just really love to run.  Period.  And sometimes in my mind I forget that “only a 50K” is still a freaking ultra. I would find myself looking at my watch, declaring “oops, we are running too fast, let’s slow down!”, only to slow down for a bit, then creep right back up to 9:15/miles again. Which if you are wondering, isn’t really my trail 50K ONLY A TRAINING RUN pace. 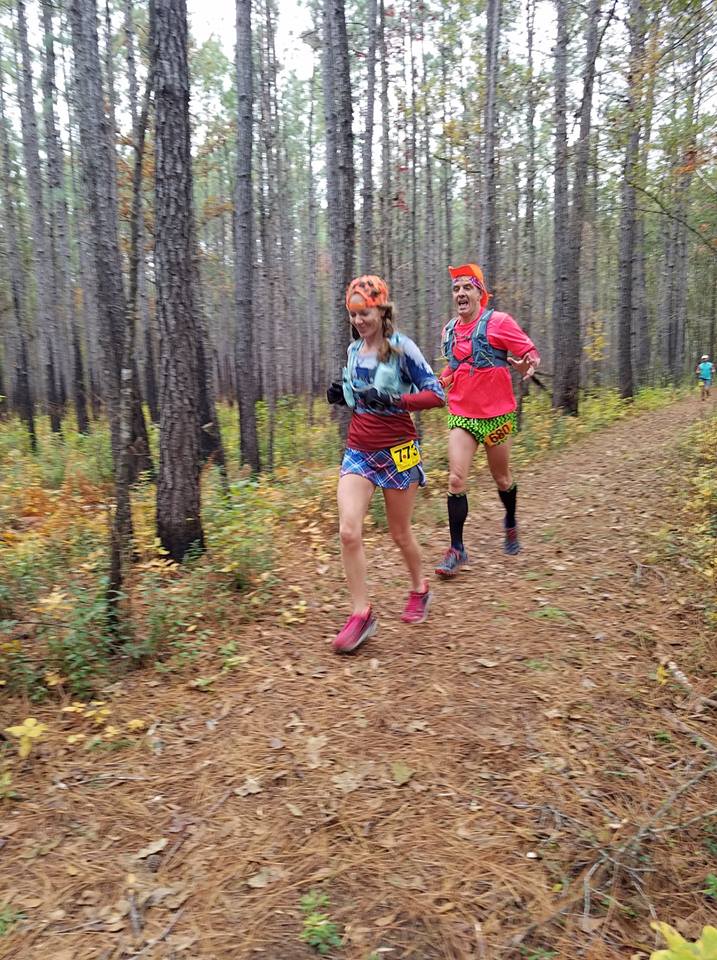 Anyway, we spent the first few miles running with $30 Dollar Club friend Dave.  He was telling us about his recent adventures, and his training for this summer’s Last Annual Vol-State 500K.   This race intrigues and terrifies me, to the point that I often catch myself saying “I would NEVER do that, too much pavement” only to immediately say to myself in my head “never say never, Heather…”  I clearly have deeply rooted ultrarunning problems, but I think most of us in this sport do, so I’m not terribly worried.

At mile 3 we hit the first aid station.  I didn’t need anything, because I hadn’t taken a single sip or bite of anything I already had on me.   So we rolled right through.  Another two miles down the trail we reached the turnaround.  Since this was in the middle of the trail, the turnaround was an unmanned checkpoint where you had to sign your initials on the list, AND grab a neon pink rubber bracelet to prove you had been there. 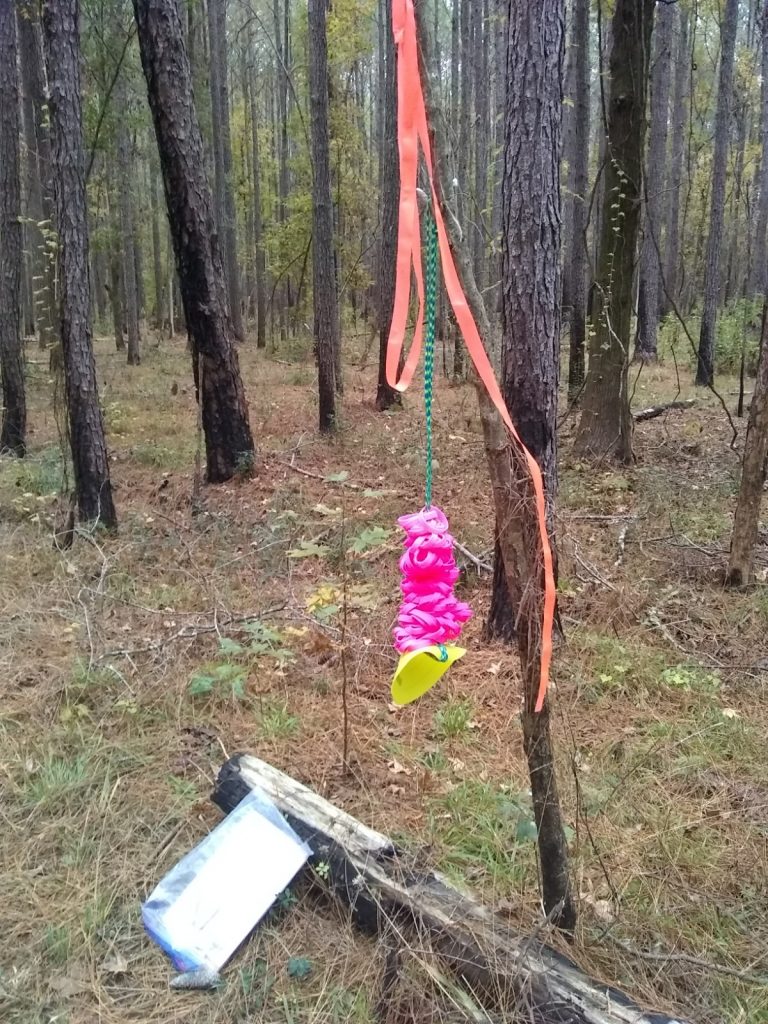 The out and backs of this course really are what make it so much fun.  The ultra community is unlike anything else I’ve ever experienced on earth.  People are hurting, people are pushing hard, hell, sometimes people are downright miserable…but they will still look up, smile, and say “great job” to you as you pass each other.   I find this even more prevalent with the Eagle Endurance community, as so many of these runners that we see time and time again at these events have become a family of sorts.

As we headed back towards the first aid station (mile 3 ish / now 7 ish) the temperature slowly began to creep up.  So when we finally rolled into the AS, we stopped to strip a few layers.  I found myself grateful I had opted for a tank top instead of a t-shirt.  Winter weather in South Carolina is wildly unpredictable, and at that point it felt like it was around 70 degrees and as always, humid.

Let’s see, the rest of the race recap gets pretty boring so let me summarize it for you:

– I took out my jacket, because the temperature had dropped again and the skies got darker.  I tied it to my waist, which was really freaking obnoxious. 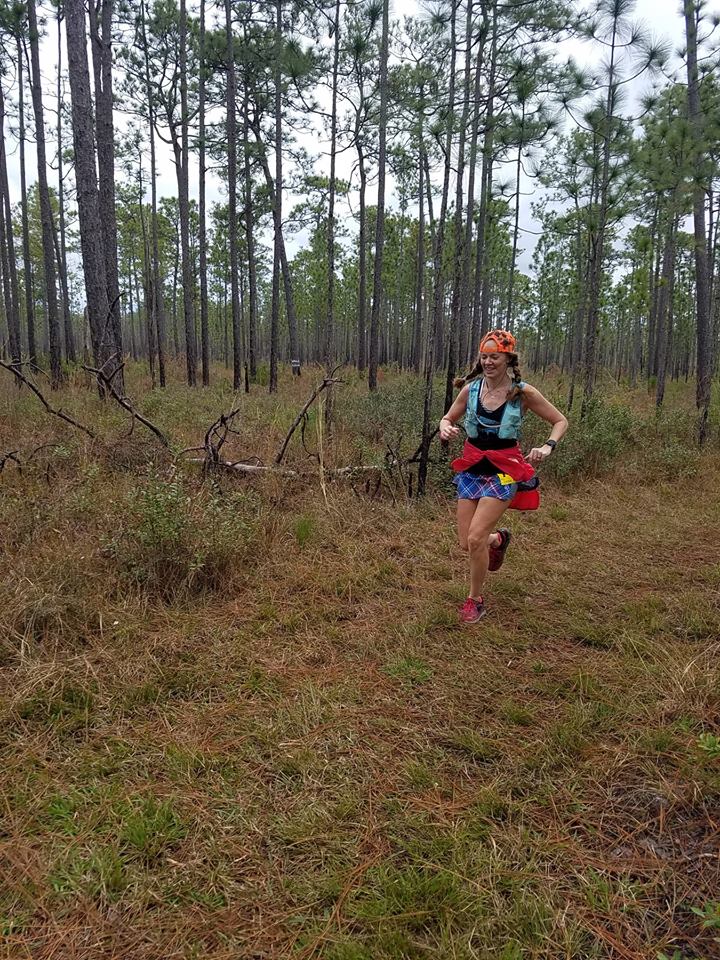 – I ran the shorter out and back with Geoff. He helped me refill my hydration pack bladder and bottles at the aid station, and then sent me off on my own (he was only racing the 25K). I put the jacket back in my hydration pack.

– At mile 20, the rain started, and progressively got worse.  I took out the jacket, and put it on.

– At mile 25, my phone died, so I couldn’t take any more pictures of aforementioned jacket.

– I felt good, albeit tired and a bit bonky, right up until that last 5 mile out and back, where I slogged, soaking wet, ready for the race to be over.  As such, when I rolled into the very last aid station (mile 28) I didn’t even stop moving, I just said hi to the volunteers, turned on a dime and ran back in the other direction while yelling something about wanting to get my warm, dry clothes.

5:37:38.  I finished in the pouring rain to some awesome cheers from some out-of-towners (shout outs to the South Dakota gals and the Yeti from Michigan) and my husband.  I also got a Dunkin Donut from Krista, which is pretty much the best finishers prize one could ask for.   There’s no photographic evidence of any of this because a) my phone died, and b) everyone else with cameras had retreated from the pouring rain. 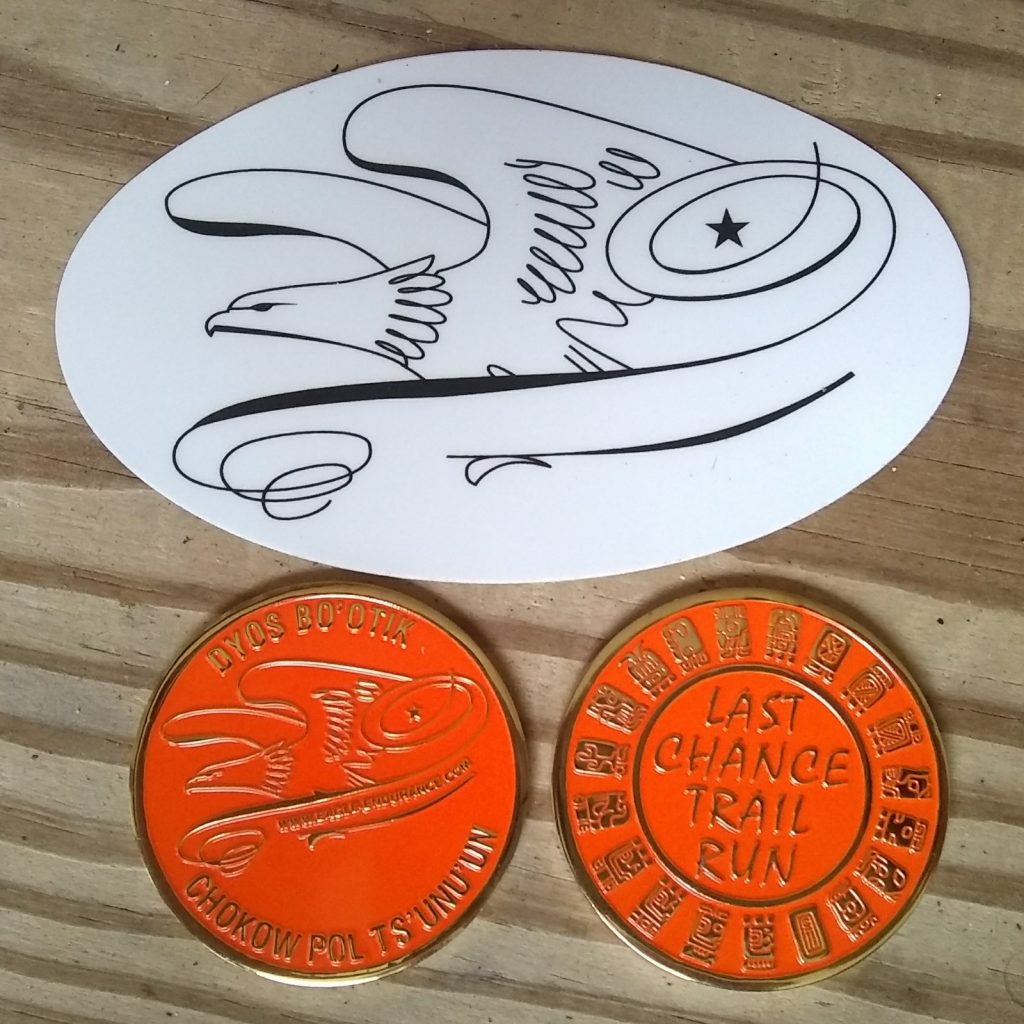 My time was equal parts “just fine” for a training run, and about 20 minutes slower than I had hoped for.  Considering my executed race strategy (or lack thereof) was trash, I’ll settle for “just fine”.

Incase you haven’t picked up on this yet from many of my past race reviews: rarely do I race “smart”.  It’s probably the cause of 95% of my DNF’s or poor performances over the past few years.  Ironically, I do know better, and would probably lecture relentlessly if a client of mine tried to pull the same shit I do.  I’m a poor example of “leading by example”, and I’ll be the first to admit it.  My mea culpa is that  I really just love to run, and when I feel good, I run hard.  Just like Jim Walmsley’s “go big or go home” attitude, except I’m not breaking Western States course records.  Or any records, for that matter.   Thankfully my sponsors don’t care…because I don’t have any.

One day I’ll learn.  Maybe 2019 will be the year.  In the meantime, I really do have a ton of fun, which is the main reason why I participate in this sport to begin with.  I’m so grateful to have found this Lowcountry trail running community, and I’m eternally grateful that they have welcomed us in with open arms. 2018 has been one hell of a racing year, with a number of highs and a number of lows, leaving me excited for what’s to come in 2019.

Thank you again Chad and Krista of Eagle Endurance for another stellar race, and every thing that you guys do for the running community.

One of your biggest fans.